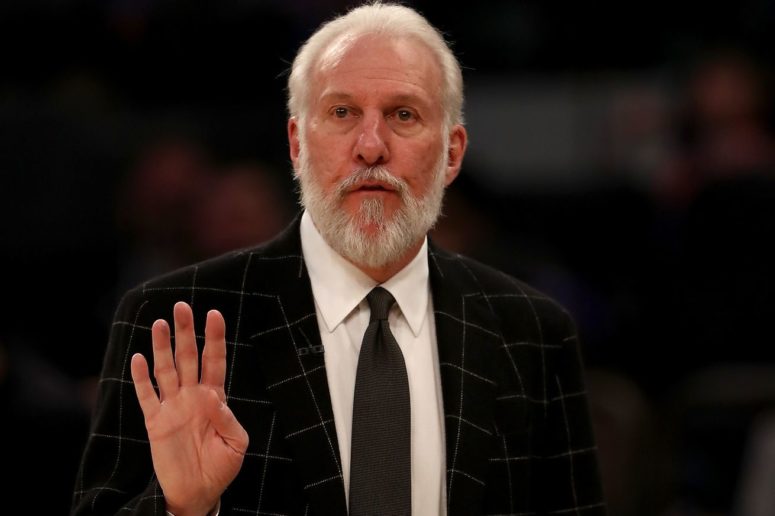 On his way to becoming the 6th winningest coach in NBA history, we countdown his greatest wins

With the win in the slugfest between our Spurs and the Toronto Raptors, head coach Gregg Popovich is one game closer to knocking Phil Jackson out of the 6th spot in wins.

The victory brings Pop’s grand total (regular season and playoff wins) to 1319. The number may seem obscure, but it ties Jerry Sloan for 5th place. Just another measuring stick with which to validate the Spurs coach’s accomplishments.

What makes it so important:

Throughout the Finals, the Nets dominated the first period. Before Game 6, Gregg Popovich stressed to his team to play within the system, no heroes. A minute and a half into Game 6, Stephen Jackson took his second ill-advised shot and Pop replaced him with Manu Ginobili.

In addition to Manu, Steve Kerr made an early appearance to spread the defense. After 11 minutes combined in the first five games, Kerr played 9 in Game 6.

Speedy Claxton also took minutes that had been going to Tony Parker. Pop was not afraid to shake things up and sit his budding French starter when it was clear he was struggling. In the highlights, you can clearly see a frustrated Parker on the sidelines desperate to get back into the game.

These are the kinds of on-the-fly adjustments Pop made, decisions that could have ended the career of almost any other coach. But trust in Coach Pop has generated 20 playoff-bound seasons and the greatest winning percentage by a coach in any of the four major sports over the last 20 years.

On a personal side note, I have seen nothing creepier than Jason Kidd blowing kisses to the glass before each free throw. I know players are superstitious and ritualistic, but some things should be abandoned for being too awkward. But I digress…

Legends on the hardwood

Tim Duncan went for 21 points, 20 rebounds, 10 assists, and 8 blocks (that were recorded) in what was his MVP clincher. David Robinson scored 13 points and pulled down 17 rebounds. As the first half ended, the five players on the court were Robinson, Duncan, Bruce Bowen, Tony Parker, and Manu Ginobili. At some point in the near future, all 5 will be joined again when their respective jerseys are hanging together in the rafters of the AT&T Center. So far they are 3 for 5 with two still going strong.

A 4th quarter 19-0 run sealed the deal as the Spurs went from a 72-63 deficit to a 82-72 lead closing the door on the Nets chances to win an NBA Championship.

After the Lakers 3peat, the Spurs/Nets series was not considered as marketable a Finals match-up. For starters, it was the first time two ABA teams met in the Finals. Both are considered small market teams. The Spurs had Duncan who was not considered a charismatic superstar. The Nets had Jason Kidd. But otherwise, these teams were not as outspoken or flashy as many of the hyped NBA elite. To make matters worse, the teams both exercised strong defense leading to low scoring games. Overall, the entire series showcased low scoring matches. The Spurs broke the 90-point barrier twice, and passed 100 once.

An officer and a gentleman

The 2003 NBA Finals sent off David Robinson in the most appropriate way, ending his stellar career as an NBA Champion, and on Father’s Day no less. In addition, Steve Kerr retired after winning two championships with the Spurs, five total in what was a most impressive career. Danny Ferry would also hang it up at the close of the 2003 season, leaving the Spurs to move into the Big 3 era for the next dozen years.

What are your memories of the 2003 Finals? Please join in the discussion in the comments section below.