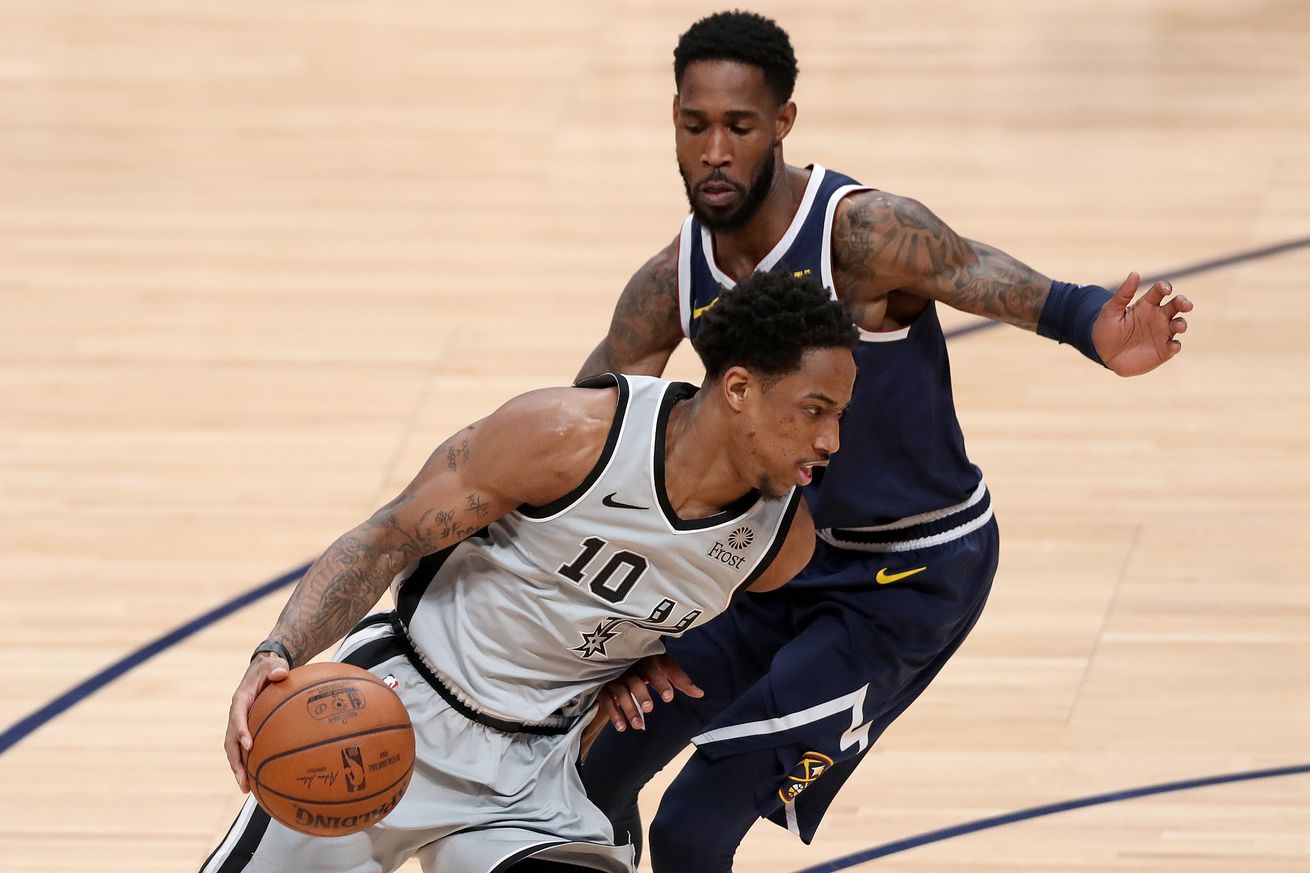 After digging themselves an early hole, San Antonio’s valiant attempt wasn’t quite enough on the road.

But despite starting the game stone cold from every spot on the floor, they just kept putting one foot in front of the other, determined to keep fighting. And fight they did. After going into halftime down by 13, the Spurs won both the 3rd and 4th quarters, scratching and clawing their way back into the game on the strength of little more than sheer will.

With Derrick White a non-factor on offense (0 points on 7 shots), and DeMar DeRozan (19 points, 8 rebounds, 6 assists) and LaMarcus Aldridge (16 points, 11 rebounds, 4 assists) struggling to find the bottom of the net, Rudy Gay and Bryn Forbes carried the scoring load.

Rudy brought a much-needed boost late in the 1st quarter. He got to the rim, grabbed boards and drew fouls at a time when the rest of the team seemed intent on scuffling their way through a Saturday night brick laying contest. He kept that energy the entire game, finishing with a team-high 21 points to go with his 8 rebounds. Bryn, the only Spur to shoot over 50% from the field, managed 19 points on just 11 shots. Their 15 made field goals was just 1 less than the rest of the team combined.

The team’s 31 made shots matched their 2nd lowest total of the season and their 36.5% from the field was their third worst. It was an ugly game, but the Nuggets’ defense deserves credit. They were committed to keeping the Spurs away from the basket, and played disciplined and physical basketball all over the floor, making life difficult for whoever had the ball.

Fortunately, the Nuggets weren’t exactly lighting it up, either. Led by Nikola Jokic (21 points, 15 rebounds, 10 assists) and Jamal Murray (23 points) the Nuggets’ offense appeared almost unstoppable at times, but strikingly vulnerable at others, and finished the night shooting just under 40% from the floor.

Still, for much of the game, the Spurs appeared on the verge of getting blown out. The Nuggets put together several of their typical mini-runs, getting out into transition for crowd-pleasing dunks and threes, and playing stingy defense on the other end. They managed to stretch the lead out to 17 a few times in the 3rd quarter, but the Spurs weathered it all.

And somehow, some way, there they were, as the minutes wound down in the 4th, slowly chipping away at the lead. From 10 to 8 and back to 10. Then down to 6, but back up to 8. The teams battled back and forth and the Spurs just kept coming.

Finally, with a little under a minute to play, the Spurs cut it to a one-possession game on a rare run out that ended in Bryn throwing down a two-handed dunk, giving him 10 points in the quarter.

It was as unlikely a moment as it was exhilarating, as it gave real life to the idea that a comeback, a game 7 victory and a trip to the 2nd round, might really be possible. But that, unfortunately, was the high-water mark. Those 2 points were the team’s last and it was all downhill from there.

Murray hit a tough one-legged runner, DeMar got blocked at the rim, and then the Spurs let time run out instead of fouling down 4 with only a few seconds difference between the shot clock and game clock. There will be plenty of time to re-litigate that particular failure, as well as some of the more curious choices the Spurs made in this game. From not playing Derrick White or Jakob Poeltl in the 4th quarter, to leaving Davis Bertans on the bench again, there are plenty of things to second guess.

But for now, it’s more appropriate to appreciate the fight, to recognize that even on a night when the Spurs should’ve been run out of the gym, they shambled their way back into frame, and nearly stole the series on the Nuggets’ home floor.

Way to fight back @spurs and make it an exciting game. Congrats @nuggets on a hard fought series. Proud of this Spurs team, played hard all season.