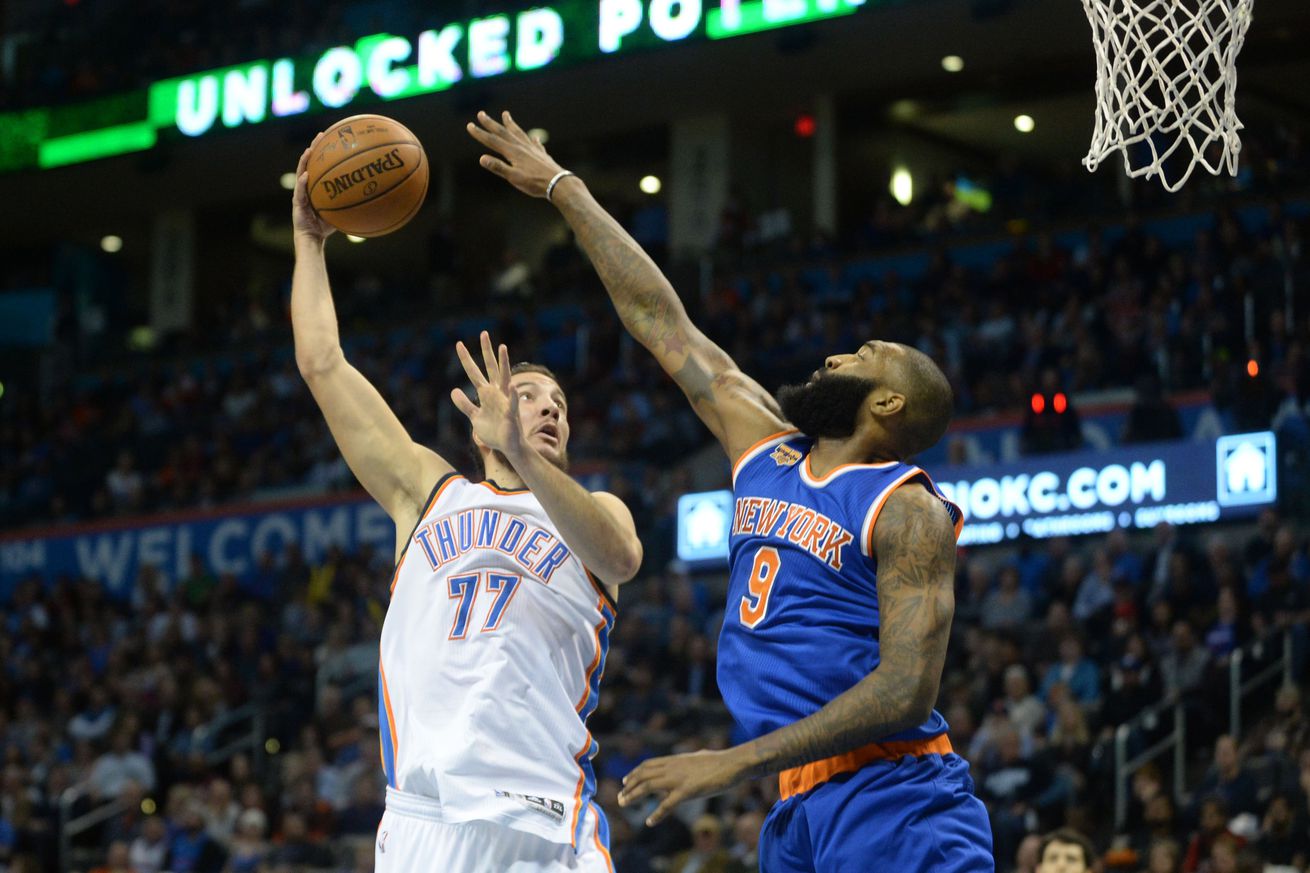 If I had predicted, a few weeks ago, that the Spurs would be replacing a nightly rotation player with Joffrey Lauvergne, I probably would have been laughed off this site. Last year a playoff team traded away Lauvergne at the deadline, and he finished 356th among all players in ESPN’s Real Plus-Minus, or 352nd in Basketball-Reference’s Box Plus-Minus. The Bulls, who are sinking into their own aimless rebuilding process, rescinded their qualifying offer to Lauvergne just a few days ago, presumably because they couldn’t see a role for him on whatever roster they’re concocting.

But here we are, the 6’11 Frenchman is a Spur. And now that he is a Spur, it feels like there are a ton of cerebral-basketball reasons for him to be on the team that we didn’t see before but could manifest once fall comes around.

Yet it’s hard to believe there weren’t more appealing options, even among the relatively small population of “big men who shoot three-pointers at least kind of regularly.” Seeing as the Spurs have been fearless in signing new-to-the-NBA players as veteran free agents — Boban Marjanovic, Aron Baynes, Nicolas Laprovittola — I’ll assume that there were no floor-stretching bigs abroad that the team felt comfortable with. So let’s go through all the shooting big men in this year’s free agent class — with no option being treated as ridiculous — to see how Lauvergne stacks up.

Before we land on Lauvergne’s true comparisons for a roster spot, we can eliminate a ton of players for either being too expensive, too risky, or too small to actually defend opposing 5’s.

A few years ago, Donatas Motiejunas would have been perfect for this kind of role — but just 71 games played over the last two seasons means he is, alas, an unreliable injury risk. Mike Scott’s recent legal problems — even though they are now resolved — would understandably make any team eliminate him from consideration. While there may be a place in the league somewhere for Ryan Kelly, Stephen Zimmerman, Maurice Ndour, or Christian Wood, they have all been recently waived by underperforming teams, the increasingly younger Spurs should not use any more roster spots on experiments.

Incredibly, that leaves only three shooting bigs — aside from Lauvergne — who are on the free agent market this summer. In alphabetical order, they are:

At this time last year, Coach Budenholzer and everybody in Atlanta signed Humphries to a deal worth $4 million. That’s pretty far from the veterans’ minimum! While Budenholzer played Humphries frequently at center, he’s just 6’9”. Although Humphries is just 31, that’s quite a bit older than Lauvergne’s 25. It’s not clear that Humphries would be a better call.

A second-round pick from a microscopic college — Muscala is a textbook Spur. The thing is, Muscala quietly re-signed with the Hawks without many whispers of him going anywhere else. Like a smaller scale of Dirk Nowitzki or Patty Mills, Muscala might have been a free agent in name only this summer.

After a kind of aimless start to his career, the last three seasons have absolutely cemented Speights’ role as the ultimate hot-off-the-bench big man scorer. Last year with the Clippers, Speights averaged just 15.7 minutes per game but made the most out of it, firing off 3.4 three-pointers per contest and dropping 8.7 points per game. Maybe there would also be some residual karma coming the Spurs’ way for taking in the man who David West kinda knocked off of the Warriors’ roster? From the outside, it looks like the only way Speights wouldn’t be a great fit is if he lands in the “too expensive category,” as something like a three-year, $15 million deal for him wouldn’t feel crazy.

So, if you’re looking for a budget big who can shoot, turns out Lauvergne is solidly in the top tier of available options. Where he distances himself even from these other players, though, is his all-round offensive creation. Check out these four categories from the 2016-17 season:

It’s clear that Lauvergne is a much more capable passer than Humphries or Speights. Lauvergne also outworks Muscala when it comes to work in the paint, collecting a greater share of rebounds and also creating more shot opportunities — with Lauvergne taking a far greater percentage of shots at the rim than Muscala.

Lauvergne’s passing work is even more remarkable when you remember that he split last season between two of the worst three-point shooting teams in the league. The Bulls were 24th overall in three-point accuracy and the Thunder were dead last. In reality it was probably much worse than that, as Lauvergne was traded opposite three-point specialist Doug McDermott.

If Lauvergne somehow managed to be a reasonable offensive creator on some of the most floor-clogging NBA teams, while being a legitimate threat from outside, his new creative teammates should help push those numbers way up.

A big that can shoot, rebound, and keep the ball moving without turning it over — sounds like another custom-made Spurs signing.