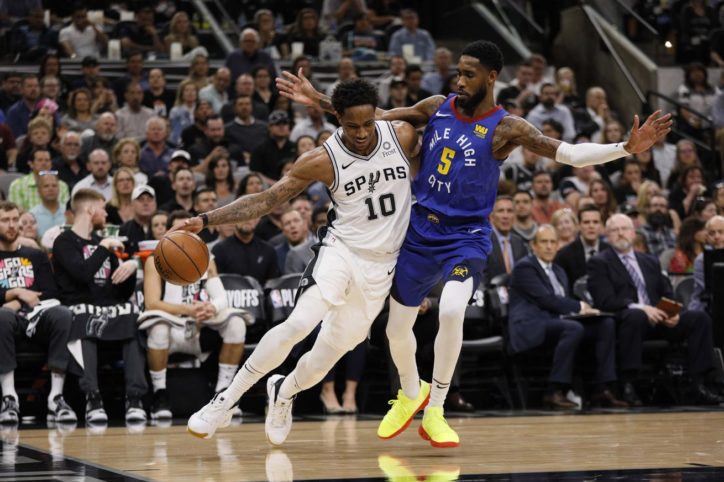 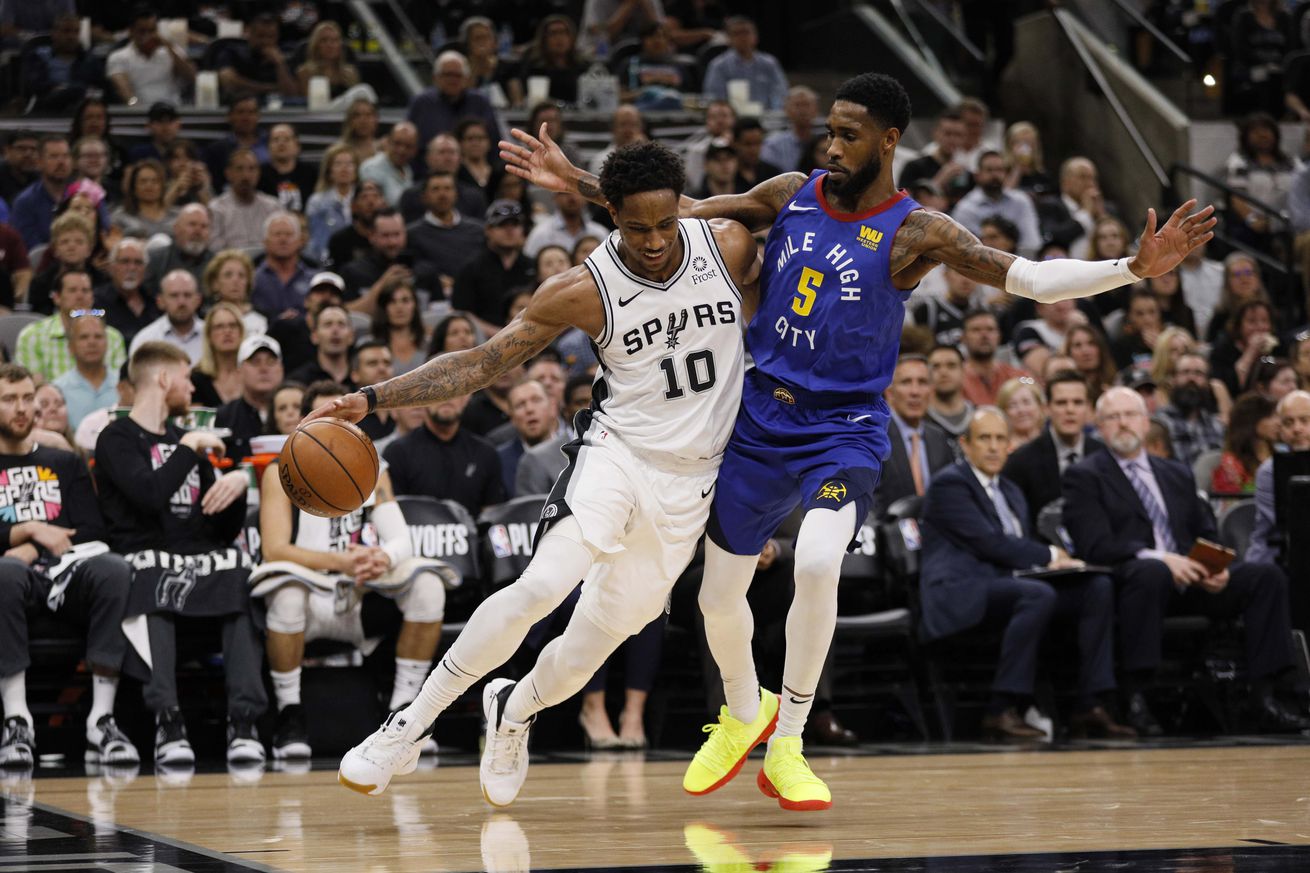 The series against Denver confirmed some strengths and revealed some issues to address in the offseason.

The playoffs often reveal or confirm strengths and weakness. There needs to be caution not to judge players and coaches definitively since matchups matter and there’s a lot of randomness involved in just a handful of games, but it’s possible to gain some insights into a team’s makeup.

Nuggets vs. Spurs offered us a chance to finally see how this version of the Spurs fared in the postseason. It was mostly a positive experience, with some concerning moments sprinkled in. Here’s what we learned from the series and how the front office can improve upon it going forward:

The offense is good enough, but more shooting wouldn’t hurt

One of the major story lines throughout the season was whether the Spurs could build a good offense based around DeMar DeRozan’s and LaMarcus Aldridge’s mid-range shooting. During the regular season they exceeded expectations, ranking sixth in the league in offense rating, but the playoffs threatened to expose San Antonio’s throwback attack as not efficient enough. Fortunately that didn’t happen.

The Spurs averaged 110 points per 100 possessions against the Nuggets, a mark that would have tied the Hornets as the 11th best in the regular season but that was the seventh best in the first round of the postseason. As a team, San Antonio was above average on offense despite taking the most mid-range jumpers out of all 16 teams. DeRozan and Aldridge led the way, averaging 22 and 20 points per game, respectively. Both got close to 30 percent of their points from the in-between area and ranked second and third behind Kevin Durant in attempts from that zone. Without abandoning the identity they committed to during the season, the Spurs managed to score enough to almost get to the second round.

Does that mean that all concerns about their outdated shot profile were unfounded? Not really. There are some caveats to the those aforementioned numbers. First, they came against the Nuggets, which had the 10th best defense in the league during the regular season. The Spurs didn’t face a juggernaut. Second, they only won when they shot well from beyond the arc, averaging 42 percent on threes in wins and 28 percent in losses. The mid-range attack can be the Spurs’ bread and butter, but they are clearly better when the outside shots are falling, since it allows them to create some separation and opens things up for the ball handlers to drive. We knew that from the regular season and it was only confirmed in the playoffs.

The Spurs can be a solid offensive team despite not attempting as many threes as other squads, but they still need outside shooting to complement their attack. Ideally they wouldn’t have to get most of it from the bench going forward, which is why it’s not surprising to see Aldridge take more threes in the postseason or to hear Gregg Popovich say that DeRozan will likely shoot more outside shots next season.

The lack of playmaking in the second unit was a problem all season long, but it was an even bigger one in the playoffs. Patty Mills, Marco Belinelli and Davis Bertans are mainly shooters. The two guards can make the occasional foray into the bucket off the dribble and Davis can attack closeouts, but those are not really their strengths. The passing and off ball motion that created room for them to shoot during the regular season is relatively easy to neutralize with a switching defense. Someone needs to create for those guys. That someone is not Rudy Gay, who is more of an isolation and post up scorer than a pick and roll player and who drives looking to score, often overpowering his defender instead of getting past him and drawing help.

During the season Pop tried different combination to address the issue of shot creation from the bench. The one that worked best had DeMar DeRozan as a point forward with the three-shooters and Jakob Poeltl as a dive man. That unit scored like gangbusters in the four games in which it played in the postseason, but allowed a ton of points in return, which is not surprising considering the complete lack of perimeter defense available to it. In general the bench was not a strength against the Nuggets on either end. Bertans was benched after Game 5, when it became clear that he had little use against the Nuggets’ small lineups. Units featuring Mills, Belinelli and Gay actually outscored Denver by over three points per 100 possessions but couldn’t score at a high level and had a very low assist percentage.

The good news is that this issue might be solved next season without the need to add a player in free agency. With Dejounte Murray back, Derrick White could get more time with the second unit, providing shot creation and playmaking while also offering perimeter defense. With a small tweak in his rotation, Pop could give the second unit exactly the type of piece it’s been missing.

The defense could be an issue, even with Murray back

While the Spurs scored at a high rate against the Nuggets, they couldn’t really stop them. Denver averaged over 113 points per 100 possessions during the first round, a better mark than the one they averaged during the regular season. The concerns about having too many one-way perimeter players and lacking of size at the power forward position were proven right. The personnel is just not there for San Antonio to be an elite defensive team, likely not even if Murray returns to his previous level on that end.

It all starts with DeRozan and Aldridge. Even if Pop ignores all potential issues with shooting and has White, Murray and Poeltl fill the other three spots in the starting lineup, the stars are exploitable. DeRozan shouldn’t guard big wings and has traditionally been a disaster off the ball. This season wasn’t an exception. He was hidden on bad offensive players often — Torrey Craig against the Nuggets — and ranked in the 17th percentile guarding spot up situations. LaMarcus Aldridge’s disastrous on court defensive rating can’t really be dismissed and neither can his low marks guarding shooters and defending in isolation. He also struggled on the pick and roll and in the post in the Nuggets series. The bench has its own well-documented issues, which were exposed by Denver at times. There’s a lack of versatile two-way talent in the roster, outside a couple of players.

Assuming they retain Rudy Gay, the Spurs will only have the mid-level exception to make a big addition. They could target a defensively-inclined forward to address some of their defensive issues, but finding one that won’t tank their offense could prove hard to do for that price. If the trade-off for some defensive versatility is shooting, that could be a tough decision, as well. If the goal is to make a leap into the the top 10 in defensive efficiency, Pop will have his work cut out for him.

The series against the Nuggets exposed some issues that plagued the Spurs all season long but it also showed that Gregg Popovich can turn some ill-fitting pieces into a cohesive unit. There are weaknesses to address, but none that seem impossible to correct, as long as they’ve learned their lessons.

What we learned from the Spurs series against the Nuggets
Source: Pounding The Rock