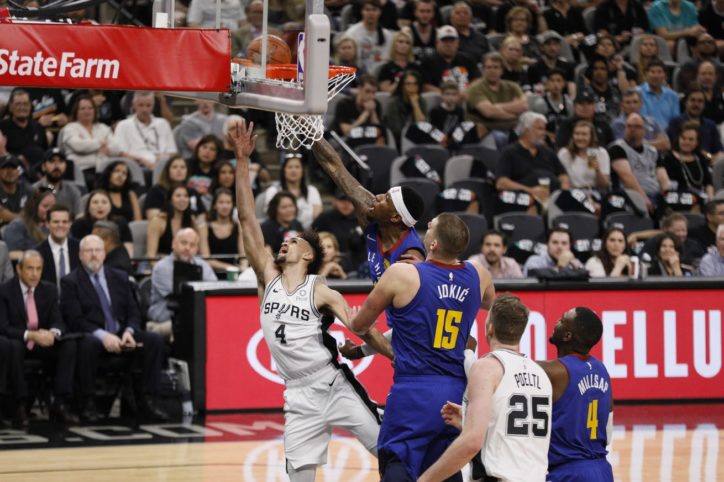 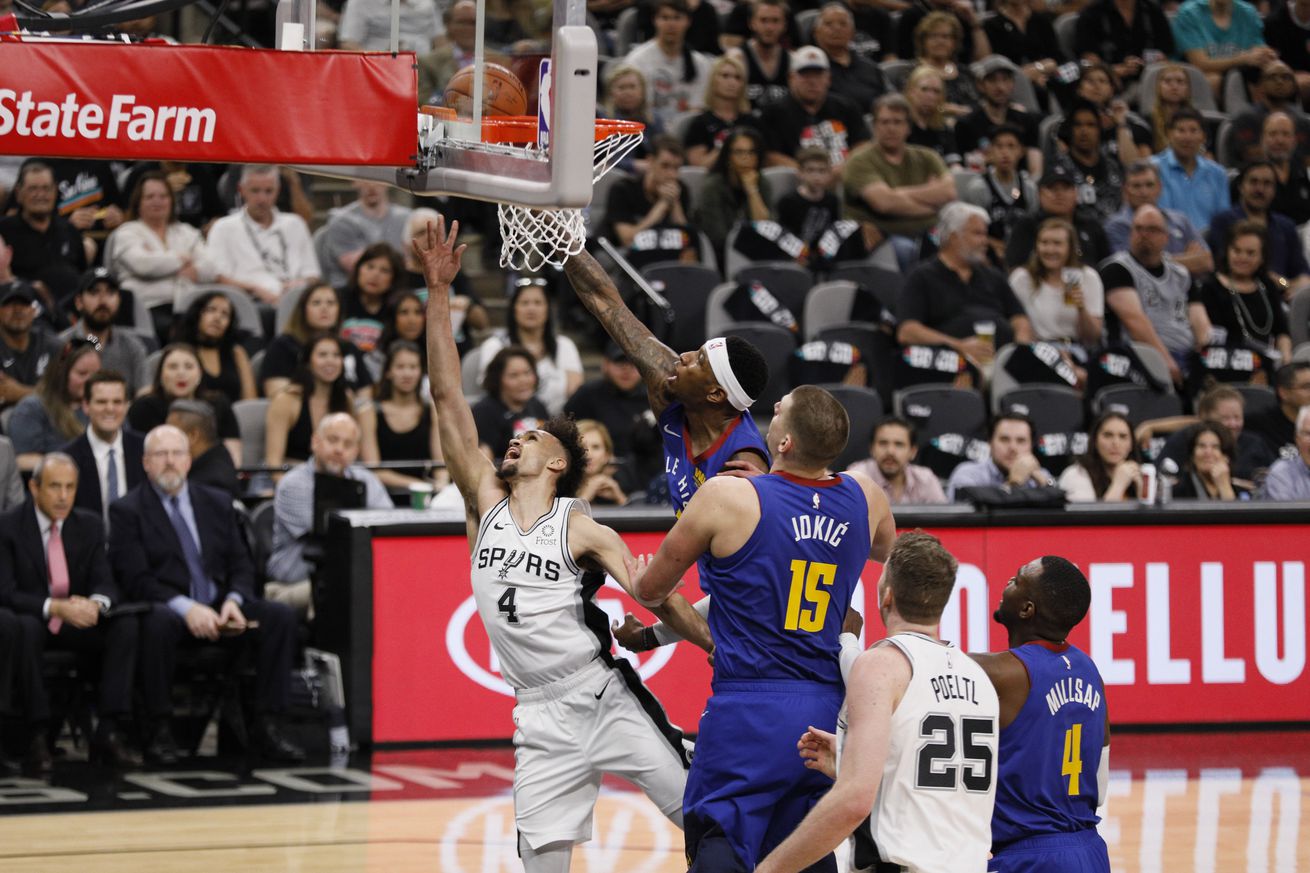 Whether he’s the primary scorer or creator, the Spurs need to help White more.

Derrick White dribbled the ball up court with his usual sense of cool purpose. The score was still knotted at zero and barely 45 seconds had run off the clock. As Denver’s defense worked to get organized, Derrick saw a momentary opening and darted underneath Jamal Murray into the right corner. Gary Harris, starting the game as Derrick’s primary defender for the first time in this series, followed, attentive and ready.

Derrick spun into a side pick and roll with Jakob Poeltl and headed into the paint. Harris followed, mirroring with his every step a role Derrick has played to perfection in their first 3 games. Just as Derrick found a soft spot in the coverage and pulled up for what he thought was an open 10 footer, Harris flew in from behind, forcing Derrick to abruptly abandon the shot and try a weak dump off to Jakob, which Harris deflected.

Nikola Jokic recovered the loose ball and hit Murray on his way up the left sideline. Murray walked into a pull up three from the left wing, giving the Nuggets a 3-0 lead.

After DeMar DeRozan dropped in a tear drop floater and the Spurs forced a Nuggets miss, Derrick brought the ball up again. He took a screen from LaMarcus Aldridge back towards the center of the floor and seemed well on his way into the heart of the Nuggets’ defense, but Torrey Craig’s timely swipe at the ball forced Derrick to gather farther from the basket than he had intended.

Instead of lofting up a difficult runner, Derrick tried to kick the ball out to DeMar but missed him by an easy 10 feet, sending the pass instead over the scorer’s table on one hop.

Those plays didn’t define Derrick’s night, but they were indicative of two things. One, the Nuggets were intent on taking him far more seriously as a threat. Moving Harris onto him as a primary defender was a clear concession to how much White had victimized Murray’s momentary lapses and tendency to gamble. Two, the rest of the Nuggets’ defense was going to be aware of Derrick everywhere he went and ready to help in an instant.

He still found seams, but the Nuggets were much better at forcing him to work to get there.

This is the version of Derrick the Spurs need to see more, but the Nuggets clearly wanted the ball out of his hands, and were willing to load up in the paint to make it happen.

As much as the Spurs benefit when he is aggressive, this is absolutely the right basketball play. That the Nuggets are willing and able to help off so many of the Spurs’ shooters with impunity will probably decide the series unless players like Rudy Gay starting knocking down these shots.

Aside from a rushed pull up jumper midway through the 2nd quarter, Derrick continued making the right basketball play for the rest of the game. He continued to cut up the Nuggets’ defense anytime he had the ball when the defense wasn’t set.

Even though the Spurs are probably better off when he gets more than 8 shots, especially when one of them is a late clock tightly contested bail out three, he made good choices time and again to take what the defense gave him.

Just like the kick out to Rudy, both of these plays are the right decision at the right time. And when the Nuggets didn’t stop his penetration, he took it all the way to the rack.

The ease with which he’s able to attack Jokic does make it seem like the Spurs should target that match up more often, but the Nuggets did a good job of protecting their Serbian big man in this game. The Spurs can force their hands a little by changing up some of the way they set these plays up, but aside from that, there’s not much else for Derrick to do.

He’ll cut out some of the bad turnovers, and hopefully never take another 5 second call in his life. He’ll hit more than 50% from the free throw line moving forward and knock down a couple of his open looks from three, but he’s not going to dominate a defense that’s able to put so many bodies in front of him.

Unless the Spurs find a way to create a little more space, Derrick is going to struggle to impact another game the way he had the first three. And if that’s the case, this series might be well on its way to over.

What to make of Derrick White’s mediocre follow up to his breakout game 3
Source: Pounding The Rock