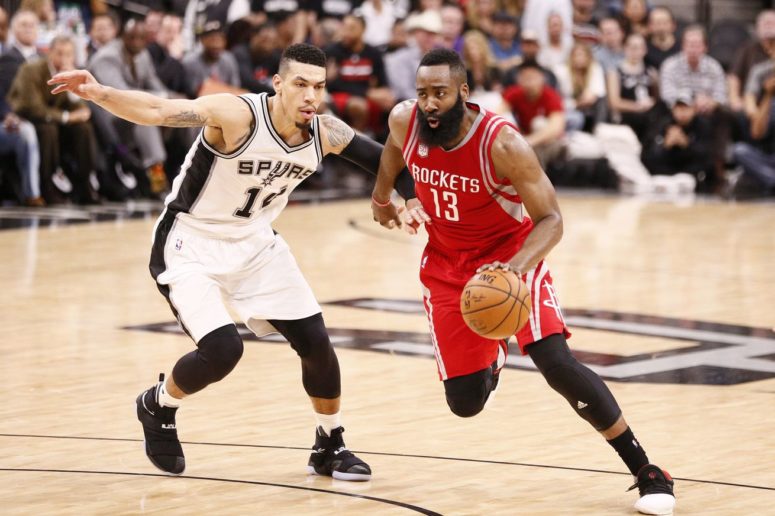 The 2017 Rockets have perfected the pick-and-roll spread offense. Can the Spurs slow down Harden?

The 2017 Houston Rockets have perfected the pick and roll. James Harden has mastered the action, and Daryl Morey has surrounded him with a repository of shooters and several big men willing to screen and dive to the rim. If you provide any help, you’re leaving lethal 3-point shooters open. If you double or hedge too hard, you give up a lob dunk to the rim. If you go over and have your big man back up and give Harden room to operate, he will needle his way to the basket and draw fouls. There’s no good options.

The Spurs are now tasked with coming up with a gameplan to try to slow him down. Here’s a look at six ways the Spurs have tried to defend the pick and roll with Harden:

Teams double the pick and roll when they’ve decided that they aren’t going to let a particular guy beat them. Leonard faced double teams against the Grizzlies. Prime Derrick Rose would get trapped off the pick and roll against LeBron and the Heat in the playoffs. But the Rockets make this impossible. They play no offensive liabilities. Any double team means a shooter or rim runner is wide open and you are giving up the two most efficient shots in basketball. Even Trevor Ariza, arguably the one player you might bait into making a play, is comfortable attacking off the double team:

Hedge Out and Go Over

This is the most common pick and roll defense in the NBA. Harden’s man will go over the screen while the big man hedges out briefly until the on-ball defender has recovered. But against the Rockets, they’ll run a pick and roll with Ryan Anderson, and the moment you hedge out, Harden will whip a pass to him for three:

This is difficult to guard. Aldridge has good instincts to come out towards Anderson, but it’s too late. If Aldridge aggressively switches onto Anderson, Harden is throwing a lob to the rim for Nene, Alridge’s man. Against most NBA players, this defense can work as long as weakside defenders rotate to help the helper. But against the Rockets, you can’t leave anybody open.

When you have the right personnel, switching the pick and roll is the most effective way to guard it. It ensures there is a body on a body at all times. If there’s a Harden/Ariza pick and roll and Leonard and Green are involved, you could simply switch the pick and roll and maintain a high caliber defender on Harden at all times. But the Rockets are not dumb. They will prey on the weakest defender and ensure that if you switch, it’s not a matchup the defense will be happy with. The Spurs don’t have big men like Taj Gibson or Draymond Green who can switch and stay with Harden. Aldridge and Gasol are too slow and Dedmon does not have the lateral quickness. Lee actually has done a solid job zoning up the pick and roll, but he’s not able to full-out switch onto Harden on the perimeter. Here, Ginobili switches with Aldridge, and Harden plays games with him:

Icing & Zoning Up and Going Under

One of the most effective ways to defend the pick and roll is by icing it. The abridged explanation is that Harden’s defender would reject the screen by jumping out and angling his body so that Harden is forced to drive away from the screener. The screener’s defender would stay back and “zone up” the play, hoping to contain Harden until the primary defender can recover.

The problem is that the Rockets have mastered the counter attack to this strategy. Capela and Nene are able to read the defender, and if they see they’re icing the pick and roll, they simply flip the screen to the other side.

As Nene comes out to set the screen to Harden’s right, watch Kawhi look back at Nene, determine where he’s going, and angle his body to force Harden to drive away from the screen. But the Rockets counter. Nene sees Kawhi’s adjustment and simply switches his screen to Harden’s left. Because Harden is so patient with the basketball, the Rockets big men always have time to flip their screens and prevent their opponents from icing.

Now, it turns into a regular pick and roll. Lee backs up towards the elbow, essentially “zoning up,” and this time, Leonard tries going under the screen, and Harden makes him pay from three. As soon as Harden notices Kawhi is not fighting over the top he knows he’ll have room to shoot the ball.

Zoning up and going under may be one of the best of several suboptimal options. Although going under gives Harden an semi-open shot, watch the clip again and you’ll notice Leonard does get a hand up. Harden is a 35 percent 3-point shooter, and if Leonard and Green can zoom under the screens and force a contested jumper, that may be preferable to all the other options. Even if Harden is relatively open, seeing if he can consistently hit that 3-pointer could be preferable to giving up the lob and allowing him to get into the lane, draw fouls and hit a ton of free throws.

The downside is that if you get caught going under the screen, you’re giving up a wide open shot, or you’re giving Harden room to accelerate and drive at the big men with room to make a move. Still, this is an under-utilized strategy that could be effective in doses.

Zoning Up and Going Over

This might be the play of the regular season for the Spurs:

After Leonard hits a three to go up 110-108 against the Rockets, Harden comes racing back and Nene sets the screen at halfcourt. This gives Harden space to make his move, but David Lee does a nice job of staying low to the ground and keeping Harden in front of him. Lee keeps his arms wide and his feet backpedaling so Harden can’t get around him. This buys Leonard time to sprint back into the play and make the block of the regular season.

While Leonard got all the credit, and this is when his MVP campaign really took off, Lee’s ability to not get beat to the rim and hold his ground is impressive. Also, watch again, and you’ll notice Parker, Aldridge and Green stay at home on the shooters.

As great as this play is, this is not a scheme that will work regularly. For one, it was the waning seconds of a two point game and so Leonard went all out to get the block. That’s not realistic for 48 minutes. Also, because Nene sets the pick at halfcourt, he’s not a threat to dive to the rim. On a regular pick and roll, Nene, and especially Capela, will dive to the rim and so the Spurs won’t be able to converge on Harden without giving up a lob dunk:

Unless you get over the screen immediately, you are giving Harden a two on one that will result in a dunk for the rolling big or free throws for Harden. Leonard and Green are some of the more capable pick and roll defenders in terms of getting over a screen, but it’s taxing to continuously chase over the top and try to catch up.

There’s no good way to defend the James Harden pick and roll. You hope to try to do it with two defenders so at least you are not giving up wide open 3-pointers to Anderson, Eric Gordon, Lou Williams, Patrick Beverly or Ariza. You hope to force him to shoot over the top, whether it be a contested 3-pointer off a switch, daring him to shoot by going under, or a difficult floater after zoning up the pick and roll.

The Spurs have the depth to try everything and show him different looks. Leonard and Lee have the potential to cause some problems for Harden, especially in crunch time when Nene, less of a lob threat than Capela, is in. Ultimately, there’s no one scheme that will shut it down, and it will be fascinating to see what Gregg Popovich comes up with as this series unfolds.