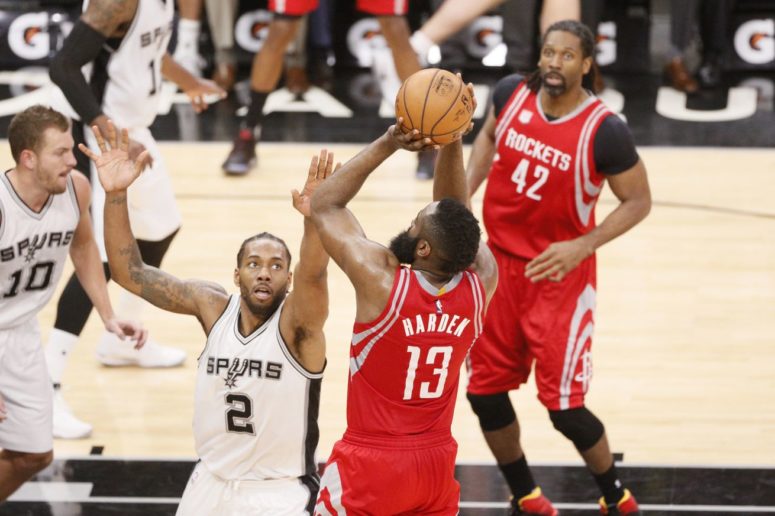 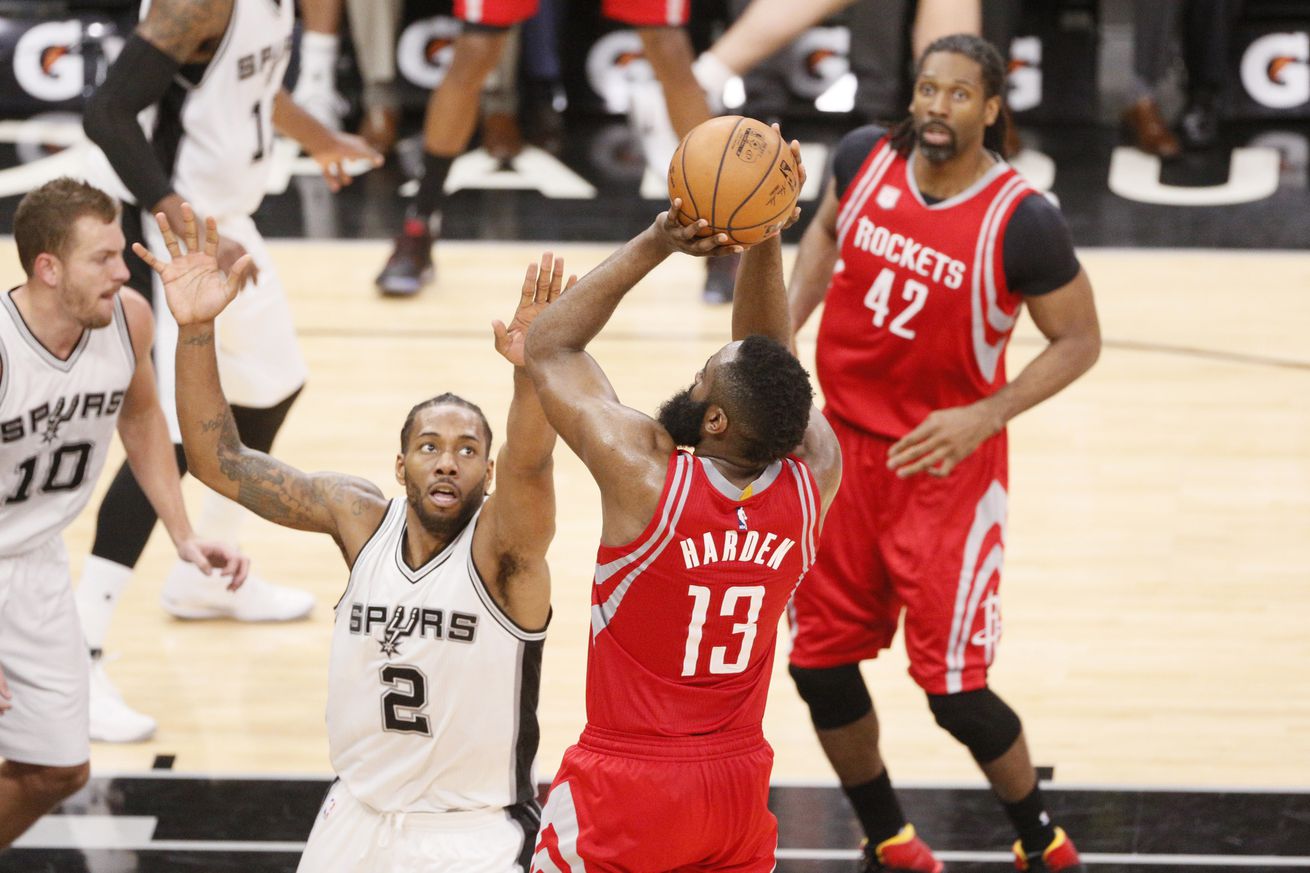 A Spurs-Rockets playoff series with a pair of MVP candidates? Seems familiar somehow…

During the Spurs–Rockets series you are going to be inundated with many “flashback” clips of the 1995 Western Conference Finals, which was the last playoff meeting between these Texas rivals. You will not enjoy watching those clips. Actually, it’ll probably be the same two plays, over and over. Hakeem Olajuwon executing an up-and-under to score on David Robinson. Then Olajuwon scoring on his signature baseline “Dream Shake.” You will be reminded that the those sixth-seeded Rockets upset the top-seeded Spurs four games to two, and be told that literally the only reason they won was because Olajuwon drastically outplayed Robinson. Kenny Smith of Turner Sports, who was the starting point guard on those Rockets teams, will regale you with his anecdote of how prior to Game 2, when former NBA Commissioner David Stern was presenting Robinson with the MVP award, that Olajuwon whispered to him “that man has my trophy,” like you haven’t heard that story a million times by now.

It will not be a pleasant experience.

You are going to be shown those “highlights” under the faulty premise that it was the last time the Spurs and Rox played meaningful games against one another. I’ll get to why it’s faulty in a second, but first allow me a moment to discuss that series, which forever colored the perception of Olajuwon for the better and Robinson for the worse for scores of pundits out there.

Is context ever given for their head-to-head stats? Of course not. No one ever mentions that Robinson was doubled the whole series while Olajuwon was not. No explanations are given for why Olajuwon attempted 166 shots in the six games while Robinson only took 98. Nobody goes into tha details of how Houston’s second banana was Clyde Drexler, literally one of the five or six best two-guards to ever play, while San Antonio’s second scorer was Sean Elliott, whose only edge over “Clyde the Glyde,” it turns out, has been broadcasting.

Seriously, look at the composite series box score. What was former Spurs coach Bob Hill’s game plan, exactly? The Spurs didn’t take away anything. They let Olajuwon do whatever he wanted, still allowed Drexler to take 16 shots per game AND gave up 55 more three-point attempts to Houston than they took. That’s more than nine per game.

The Rockets had superior ball movement. They kept swinging it around to get better shots, with 153 assists to San Antonio’s 116. Five Rockets had at least 22 assists in those six games. The Spurs had just one, Avery Johnson with 45. The Spurs were comprehensively out-coached and out-manned on both ends of the floor, but sure, let’s blame “The Admiral” for being soft, because that’s how things work in hot take, post-fact America.

Oh, and Smith’s anecdote is complete nonsense, even if Olajuwon actually said it. He had no business feeling slighted for the MVP that season and the voters agreed. He finished a distant fifth, with exactly one first-place vote out of 105 ballots. The Spurs went 5-1 in the regular season vs. the Rockets that year, and Robinson had significant edges in PER (29.1 to 26.0), Win Shares (17.5 to 10.7) and Win Shares per-48-minutes (.273 to .181). Even if voters didn’t know about that advanced stuff back then, their counting stats were almost identical but Robinson’s team won 15 more games. It wasn’t that complicated. They just gave the award to whichever superduperstar’s team finished with the best record. Shaquille O’Neal had a better argument than Olajuwon did.

Actually, if anyone wanted to feel slighted, it should’ve been Robinson the year prior. He lost out to Olajuwon even though he averaged a couple ticks short of 30 points and 5 assists per game as the Spurs “point center” and he did it without even Elliott as the secondary scorer that year. Check out the disparity in Win Shares and PER that season if you like. The fact of the matter is if we can re-do MVP ballots armed with the information and context we have now, Robinson would probably have won two or three of them and his career would be looked at in a better light.

With that out of the way, the actual last meaningful game between these two teams wasn’t June 1, 1995 (the date of Game 6 of that series) but rather March 2, 1999. A mere regular season game in the record books, sure, but by many accounts one that would’ve prompted the firing of one Gregg Popovich, had the Spurs lost. He wasn’t a five-time champion back then, remember. All Pop did with a healthy Robinson and Duncan in his Rookie of the Year campaign was a first-round win over Portland and a five-game second-round exit to Utah. In the lockout-shortened 1998-99 season the Spurs had gotten off to a 6-8 start and Pop was on the hot seat. From former (smh) ESPN.com columnist Marc Stein’s story:

“It was different from the regular pregame,” former Spurs forward Malik Rose said, rewinding back to the game in question against a Rockets team headlined by Hakeem Olajuwon, Charles Barkley and Scottie Pippen.

“David [Robinson] usually didn’t say much beyond a prayer in the huddle when we brought it all in, but [before this game] David was saying, ‘We’ve got to get it together, we’ve got to do this, this is a big game.’

“If we lost that game, they were going to fire Pop and bring in Doc [Rivers] … that was the rumor. I would have to say it was real because of the gravity in the locker room. I’ll never forget it.”

Said then-Spurs guard Steve Kerr: “I can’t say I felt like he was close to getting fired, but there was a lot of discomfort with the way things had started [that season]. Pop wasn’t Pop yet. He didn’t have a name. The fans still didn’t really know who he was.” …

… Johnson, Pop’s point guard and the most vocal of leaders on that Spurs team, says today that he has no doubt that Houston game was the ultimate must-win for the third-year head coach.

“Absolutely,” Johnson says. “Things had been communicated to us. It was really real.

“There was a lot of noise about Pop being potentially replaced by Doc, so David [Robinson] and I went to Pop’s house before we got on the flight to go to Houston. Pop talked to us and … what I will say is we came out of there feeling so strongly about Pop that we knew we had to go win that game.”

The Spurs whipped Houston 99-82 that day, and you could certainly argue that retaining Popovich has worked out pretty well for them, but I don’t want to be too rash here. It’s best left for history to judge.

“What does all that mumbo-jumbo have to do with this series?” you ask. Well, nothing. But also everything? No, you were right the first time, it’s nothing.

Except there are connection points here. There is precedent and things to learn from. Yes, technically, Pop and these Spurs have never met the Rockets in the playoffs before. But Popovich, Tony Parker and Manu Ginobili have squared off against Mike D’Antoni’s Phoenix teams plenty of times and have enjoyed quite a bit of success. What are the Rockets, really? They’re a souped-up, hyper-charged version of D’Antoni’s “Seven seconds or less” Suns, with James Harden in Steve Nash’s role and the Clint Capela/Nene Hilario combo in A’mare Stoudemire’s spot as the roll man.

The way the Spurs beat those Suns teams was to let the Nash/Stoudemire pick-and-roll get theirs and to shut down all the three-point shooters on the perimeter. They got back in transition, refused to let Shawn Marion feast on the fast break, and didn’t allow Phoenix’s perimeter people to get going. The less involved those guys were on offense, the lazier they got on defense. Whereas the 1995 Spurs couldn’t stop any one facet of Houston’s operation, Pop’s Spurs made a commitment to take away specific aspects of the Suns attack, knowing full well that they couldn’t take away everything.

I see a similar path to salvation in this series. Let Harden shoot. Let him score 75 a night if he can. Give him the Parker treatment and go under every screen. (At least that way he won’t draw any cheap three-shot fouls.) The dirty secret about Harden is he’s not that great of a three-point shooter. Just 34.7 percent on the season and 36.4 percent for his career. His efficiency comes from the free-throw line. If the Spurs can just turn him into a shooter, keep their hands back, don’t foul, and occupy the passing lanes, eventually he’ll wear down and cool off. And like we saw with Russell Westbrook and the Thunder, eventually Harden’s teammates will grow bored and listless if they don’t get to touch the ball.

Commentators will try to draw parallels between the Robinson/Olajuwon MVP duel and Harden’s match-up with Kawhi Leonard, but don’t buy into that baloney. Leonard won’t get to guard him, not in any real way. Harden will either force a switch or use a screen to erase Leonard from the picture. The best way for Leonard to be effective will be to shut down secondary guys like Eric Gordon and Lou Williams, to dominate on the glass and to make the Rockets pay on defense since he won’t have to waste much energy defensively. Essentially he’ll have to out-Harden Harden.

It’s not going to be easy, not by a long shot. Popovich will have to get out of his comfort zone and play small almost exclusively. That means a lot more Danny Green, Manu Ginobili and Jonathon Simmons than he’s comfortable with, probably, and maybe more Kyle Anderson than I’m comfortable with, unfortunately. Maybe he’ll try to sneak some David Lee in there against Ryan Anderson, with strict instructions to never leave him, but I don’t like that match-up at all. I’d prefer Davis Bertans, obviously. I’m more curious if the backup center will be Pau Gasol, Dewayne Dedmon or Lee.

The tricky thing here is that Pop doesn’t seem to have much trust these days in any of his two guards or backup wings, so asking him to play at least two of them plus Leonard for the majority of the game seems like a fool’s errand. He’ll probably use some of that Parker-Mills pairing that was effective the last couple games against Memphis. Green, Ginobili and Simmons will have to earn more minutes. (Or the others will have to lose theirs.)

It’s simplistic and trite to suggest that the series will come down to Leonard vs. Harden or Parker/Mills vs. Patrick Beverley/Williams or LaMarcus Aldridge vs. Capela/Nene. It’s all of those things and none of them. It’s three-point production, second-chance points, free-throws, fast break points, turnovers, all the same old stuff. Like Pop says, it’s never just one thing.

Either way, this is probably going to be a long, entertaining series and one where both teams struggle to consistently stop the other. It’s too bad that the league has changed the format and they won’t announce the MVP until after the Finals. It’d make for a perfect storyline for Leonard to have to watch Harden accept the honor before one of these games.

Of course all he’d say to his teammates “I’m glad they gave it to him. That means I don’t have to give a speech now.”