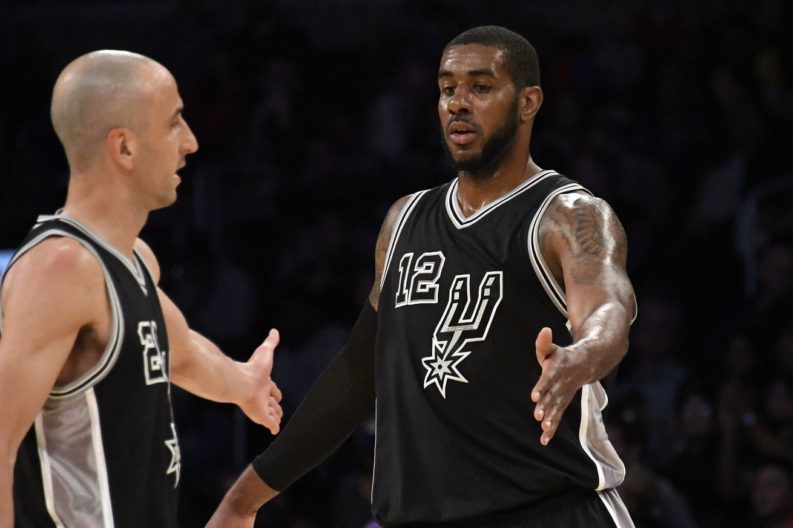 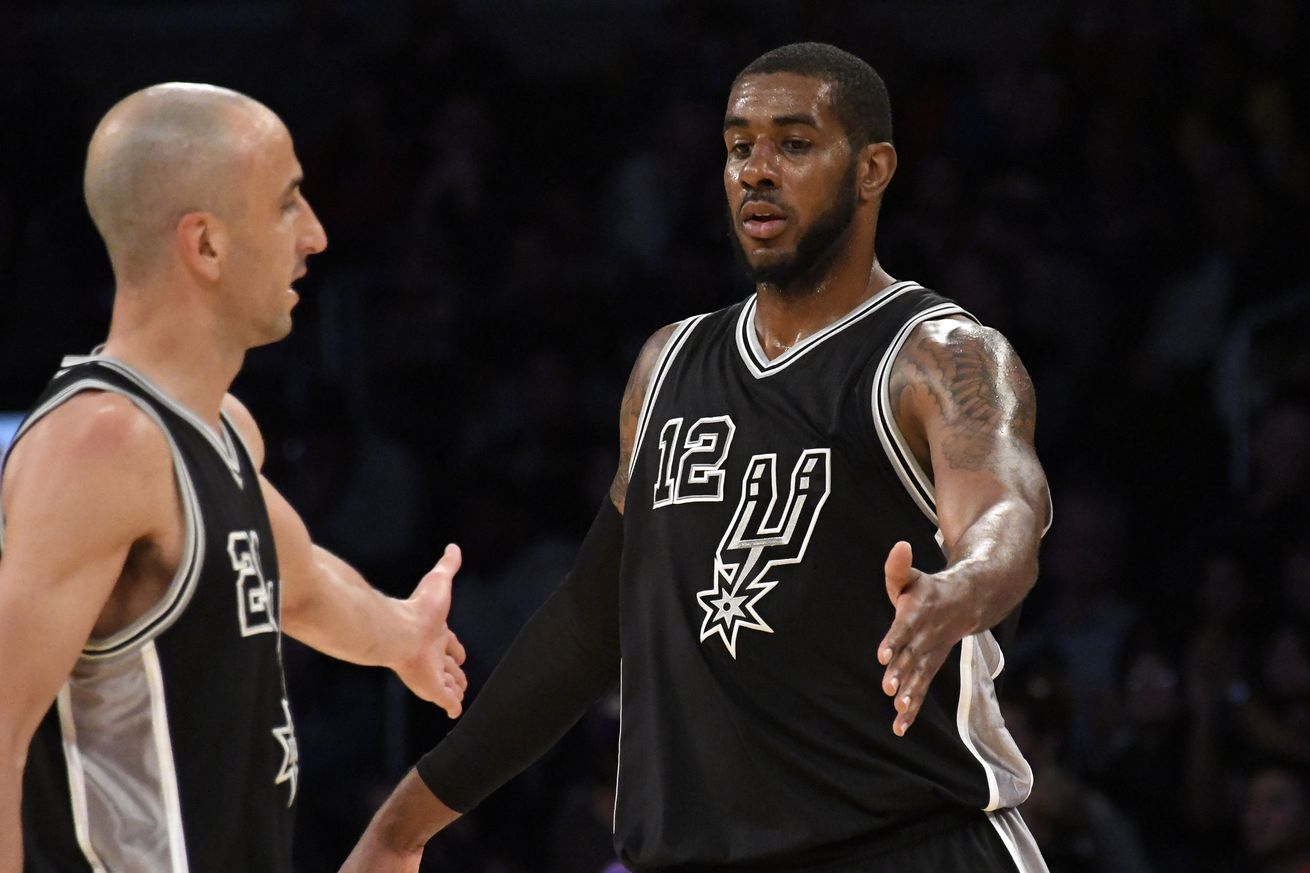 This week brought uncertainty in many forms and PtR’s staff roundtable takes on a variety of issues.

Last week it was announced that Kawhi Leonard’s quadriceps recovery was not what doctors had hoped and the two-time Defensive Player of the Year was put onto the injury list indefinitely. As Kawhi is sidelined, LaMarcus Aldridge continues his reign as the team’s leader. Aldridge hit his thousandth point in the opening minutes of Friday night’s loss against the Toronto Raptors. Only he and LeBron James have scored 1,000 points in the last 11 consecutive seasons. That’s quite a small table to fill.

While LaMarcus did not make the “starting” line-up for the West in this year’s NBA All-Star Game, his teammate Manu Ginobili came 5th for guards.

Questions were posed to the panel on Saturday and reflect the games involving the Denver Nuggets, Atlanta Hawks, Brooklyn Nets, and Toronto Raptors. For discussions involving the NBA trade deadline, the Spurs return home, and LeBron’s visit to the Alamo City, check back next week.

Let’s address the elephant in the room. Kawhi is “out indefinitely”. How much does that phrase alone define the Spurs’ season?

Marilyn Dubinski: It’s pretty much the Spurs’ season in a nutshell. The only reason I’m not panicking yet is Pop said it isn’t because he’s getting worse, just that he’s not getting better, and also that he defintely won’t be missing the entire season. I also think it doesn’t hurt to keep him out until he’s can go every night because his inconsistant appearances and the decision not coming until around shootaround was difficult on his teammates since the gameplan could change in an instant. They need him back soon, but it’s not time to panic just yet.

Jesus Gomez: What happens with Leonard will absolutely determine how this season goes for the Spurs. That was always the truth. His absence during this stretch in particular could have a huge impact on seeding. The Wolves are just a game back. The Thunder and Blazers are a little further behind, but they could make a push. The schedule gets tougher. The next few weeks could be challenging.

Bruno Passos: It’s really the only narrative that matters, or has mattered since Game 1 of the 2017 Western Conference Finals. The Spurs were the best counter to everyone’s Warriors fatalism last season, and the chance of seeing them challenge it again might be taken away from us for a second year in a row.

Mark Barrington: It changes the picture from that of a contender with a decent chance to knock off the Warriors to the story of a scrappy group of backups who [exceedlive up to] expectations and take an early exit from the playoffs. It’s like a choose your adventure book where you decided that the submarine broke on the first page. This is, of course, assuming that Kawhi won’t be back for the playoffs, which I feel is pretty likely at this point.

J.R. Wilco: As PtR’s resident Emperor of Silver Linings, I wish I had something more optimistic to say. This injury is one that shouldn’t be played on if there’s any pain, because it’ll only get worse and could become chronic. If two months of rest at the beginning of the season didn’t get him fully past the injury, then I don’t have confidence that two months of rest now will do it. I know that Pop said he wasn’t out for the rest of the season, but with the way the club is playing, if Kawhi doesn’t return then it’s either a first round exit or perhaps missing the playoffs altogether.

All-Star “starting” line-ups and captains were announced. Any surprises or disappointments?

Dubinski: Not really. I think LaMarcus Aldridge could have been a starter over DeMarcus Cousins, but I can see why fans who haven’t watch his turnaround first-hand this season aren’t impressed by him.

Gomez: LaMarcus Aldridge had a good case to be a starter, but I knew he was not getting in after watching the early popular vote returns. I’m fine with the rest.

Passos: No. I could gripe about the Pelicans, on the cusp of missing the playoffs, having two All-Star starters, but Anthony Davis and DeMarcus Cousins’ numbers have both been ridiculous. As long as LaMarcus Aldridge is in the game, the only complaining I’ll be doing is about the NBA not broadcasting the selection process.

Barrington: Not really surprised, LaMarcus deserves a starting spot, but fan voting isn’t kind to guys who show up every day and aren’t particularly flashy. I hope he and Manu (for reasons discussed in last week’s article) make it in as reserves.

Wilco: I’m disappointed that Manu didn’t make it in as a 40 year old starter, but there’s nothing to be surprised or upset about.

Spurs had a strong showing at home against Denver between disappointing losses to Los Angeles and Atlanta. How important is home court to the Spurs this season?

Dubinski: Very important. If they were performing similar at home as they are on the road they’d be in a world trouble. Right now they’re facing the very real possibilty of not having homecourt past the first round and could fall to not having it at all, so they need to take whatever juice they’re drinking at home with them on the road from here on out.

Gomez: At this point, it’s the only thing keeping them near the top in the West. They are 11-15 on the road and score under a point per possessions away from the AT&T Center. That’s atrocious for a team as talented as the Spurs. Fortunately they have a bunch of home games coming.

Passos: If Kawhi doesn’t come back or isn’t 100% come April, it’s probably the difference between the Spurs advancing past the first round or not. If the team is at full strength, it matters less, and we’ll likely see them continue prioritizing health because of that.

Barrington: It’s tough to add to what the others have said. Without Kawhi, the Spurs will probably win in the playoffs with home-court advantage. With him, they can win anywhere.

Wilco: Role players stepping taking more responsibility than they’re used to is noble, but it’s harder to do on the road. And it all falls apart when the team can’t score which means they barely win when LMA plays out of his mind —- anything short of that means a loss.

LaMarcus hit his thousandth point against the Raptors the other night. Only he and LeBron James have scored more than 1,000 points for 11 straight years. Can the scoring alone define his credibility and consistency?

Dubinski: Scoring is what he’s most known for, especially during his Portland days, but since joining the Spurs they have also brought out his defensive prowess and made him one of the better big men in the league on that end. Scoring isn’t the only thing he should be defined by, but that’s still quite an accomplishment.

Gomez: I think what makes the stat impressive has less to do with scoring prowess than with durability. Kevin Durant and Carmelo Anthony, just to name two other veteran stars, could have done it too. But they got hurt. Aldridge has been remarkably durable, especially for a big man. That adds to his value.

Passos: His narrative has obviously pivoted since coming to San Antonio, with a greater focus on defense and the need to fit into a new system, but that knack to get buckets is a big part of his identity. He’s much more than a scorer these days, but that kind of scoring consistency may define him better than any other individual thing.

Barrington: It’s a testament to his durability. A thousand points is just about 12 points per game if you play all 82 games in a season, and there are a lot of players in the NBA that average 12 or more. But very few that can keep that up for more than a decade without missing significant time to injury or lineup changes.

Wilco: There’s definitely value in offense alone, but that’s never going to satisfy Pop. So while the longevity of his streak shows value, I’m glad he’s stepped up so well on D.

Manu came in 2nd among guards in the NBA All-Star voting. What is Ginobili’s greatest legacy?

Dubinski: Besides being extremely clutch and one of the most popular players world-wide, I think his legacy will be his unselfishness and willingness to come off the bench. He made being the 6th Man popular again, and as far as I’m concerned they should name the award and trophy after him.

Gomez: We don’t know yet. Legacies are a tricky thing. Some players are extolled more after they retire than when they were still playing. Others are forgotten. I like to think that knowledgeable fans will remember his unique style and his passion for the game. But maybe he’ll be remembered for the Eurostep and the flopping. Who knows.

Passos: There’s a lot you can get into regarding the aesthetics of his game, which should all get their deserved attention. The thing people may focus on the most may still be that he, through his prime as one of the NBA’s best shooting guards, willingly came off the bench, and the role that played in keeping the Spurs a perennial contender for a decade and a half. That, plus his passing and willingness to sacrifice his body on the floor, may have people looking back at Manu as one of the most selfless stars this league has seen.

Barrington: That’s an impossible question to answer without taking a few thousand words, but I’ll try. He changed the game by introducing his ability to contort his body and change direction to get past defenders in ways that nobody thought of before. His intensity and drive redefined how guards play the game. His fearlessness of the defensive end of the court made taking a charge an exciting play. James Harden and scores of other younger players wouldn’t be who they are today without Manu’s example. He changed the game and made it better and more exciting for the fans.

Wilco: Manu’s legacy: vision and smarts never wear out, and extend careers as long as the body is able to play.

Do you have a question you would like considered for the In the Bonus? Write in the comments section below, tweet it @jeph_duarte, or email me at jephduarte(at)yahoo.com