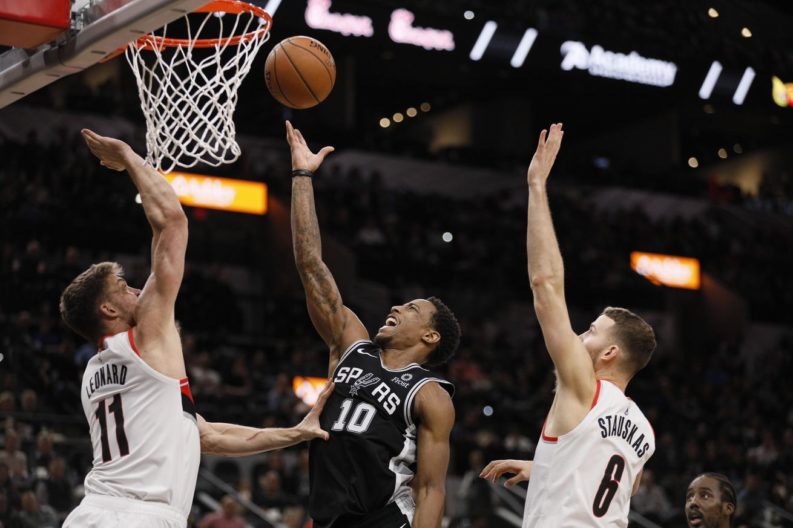 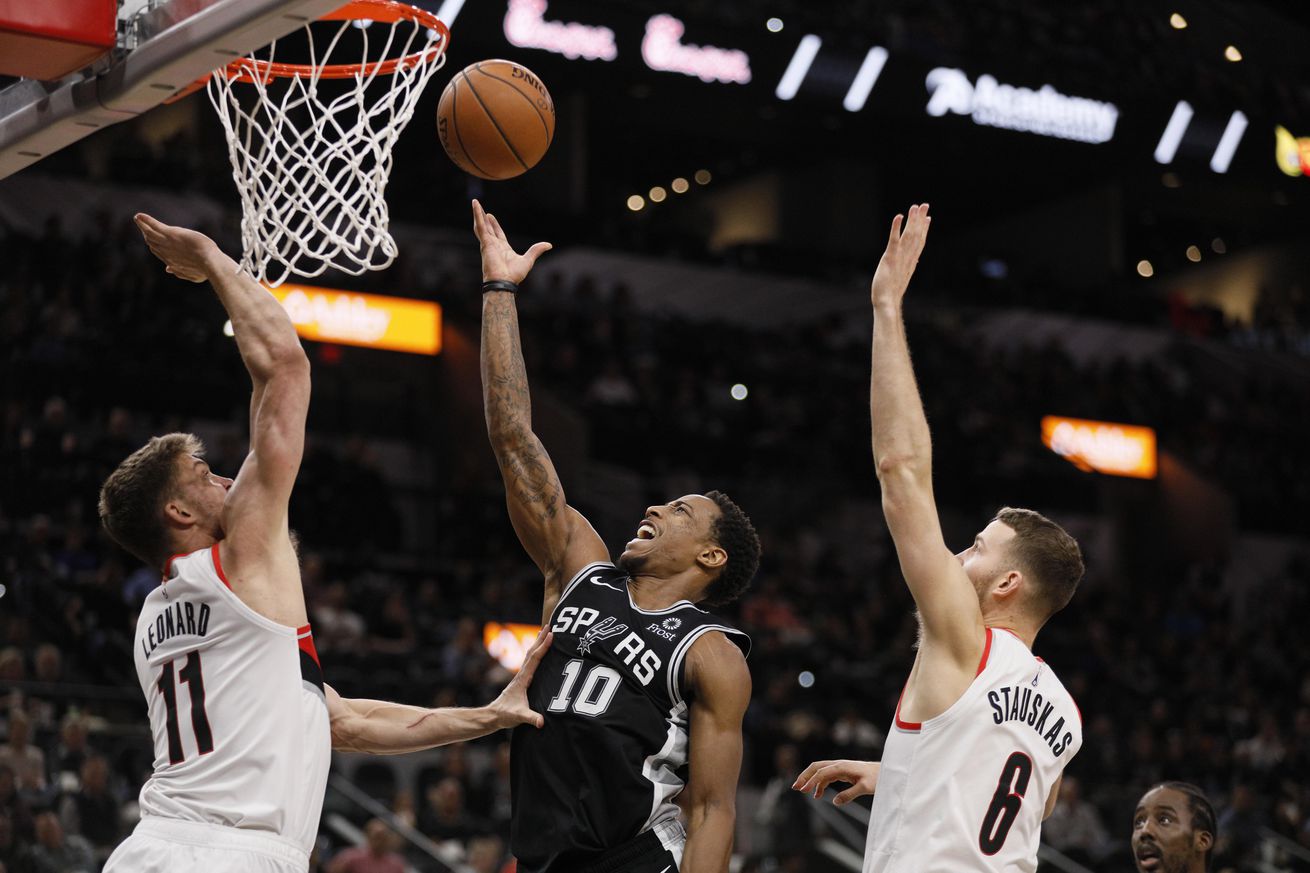 An underutilized weapon took over in Sunday’s second half.

Even in the midst of the team-wide hot streak, the Spurs were riding last night against the Blazers, DeMar DeRozan’s 15 straight points at the end of the third stood out. His run carried the Spurs from down 4 with just under 5 minutes left in the third, to up 4 at the 1 minute mark. DeMar poured it in from all angles, hitting turnarounds and fadeaways, driving and cutting for layups, and drawing fouls.

He was especially deadly in transition and early offense, going 3 of 3 with an and-1 for 7 points on just 4 possessions in that stretch. That’s a little out of the ordinary in terms of efficiency, even for DeMar, but not much. He has an eFG% of 65.8 with 18 or more on the shot clock so far this year. However, it’s definitely an outlier in terms of frequency, because he averages less than 1.7 attempts per game that early in the clock.

Whether by design or decision, DeMar made a concerted effort to push the pace and force the issue to close out the 3rd quarter, and it paid off handsomely.

The run started with a steal and a fast break. Maurice Harkless’ attempt to kick the ball out on a baseline drive that went nowhere sailed over Jusuf Nurkic’ head and nearly over halfcourt. Nurkic managed to save it, but Damian Lillard could only get a finger on the ball and the tip went straight to DeMar.

Even on a fastbreak, DeMar is as patient as ever. He gives the defenders time to commit to who they’re guarding, with Derrick White and Patty Mills doing their best to provide him with room to operate by spacing out to the opposite corner and wing. DeMar isolates C.J. McCollum on the right side of the paint and gets him moving to his left before knifing right by him to the rim for a layup that cut the lead to 2.

After some outstanding individual defense by Davis Bertans isolated at the top of the key on McCollum, DeMar grabbed the defensive rebound and ran the ball up court for the Spurs next offensive possession.

DeMar shows his patience again, and rather than charge into four Portland defenders he works his way over to the left wing where he’s most comfortable and goes to work on Harkless. Derrick looks ready to cut through the paint, but stops when he see DeMar setting Harkless up for a drive into the middle of the paint. DeMar leaves his dribble slightly exposed and, once Harkless lets his hand venture into the cookie jar, swings the ball through contact and straight up into a layup for the and-1.

He traded buckets with the Blazers for the next minute, hitting a pullup from the right elbow and a turnaround fadeaway over Al-Farouq Aminu on the left baseline, before grabbing another defensive rebound and taking off down the floor.

This is the only blemish on DeMar’s record in this stretch, though it’s not really his fault. Jakob Poeltl curls to the near side of the lane instead of continuing to the basket, so DeMar’s pass sails out of bounds.

Jakob made up for it on defense on the ensuing possession by swatting Lillard’s layup attempt off the glass. Dante Cunningham grabbed the rebound and tossed it to DeMar who was already off and running.

Again, DeMar’s in no rush. He pulls up to his left to match up with Stauskas, and turns his back to the basket. Once the help defender starts to clear out of the lane, DeMar gives Stauskas a hard dribble and a shoulder fake likes he’s going to spin baseline before driving to the rim. He gets the bucket and could easily have gotten another and-1 opportunity, given the amount of contact between him and Meyers Leonard.

On their next trip down the court, despite DeMar having scored the Spurs’ last 11 points, the Blazers lost track of him briefly, and he added 2 more to his total. After Damian Lillard missed a pullup jumper, DeMar grabbed the rebound and took off down the court one more time. Patty Mills set a screen on Aminu to allow DeMar to work on Stauskas again, and DeMar quickly got him in the air on a shot fake and earned two more attempts at the charity stripe, which he converted to run his streak out to 15 straight points for the team.

Over those four and a half minutes the Spurs defense repeatedly forced the Blazers late into the shot clock and held them to just 7 points on 8 possessions. 2 of those points came on a block/charge call on Jakob that could have gone the other way and 3 more on a Stauskas 3 with the shot clock expiring. Portland’s best look was a heavily contested left handed layup by Lillard over Jakob.

The turnover that kicked off the run and all those defensive rebounds gave DeMar the chance to attack a vulnerable defense over and over again. He got into a rhythm and there was little if anything the Blazers could do about it.

The Spurs are last in the league in frequency of transition offense, but lead the league in per play efficiency, per Cleaning the Glass. Watching these clips, it’s easy to see why. When the defense can generate stops and steals, the offense can look nigh on unstoppable, especially with DeMar pushing the ball up court.

On most nights, though, the defense rarely affords him these kind of opportunities. While at least some of that is due to his own defensive struggles, it leaves a lot of room for dramatic improvement if and when the team’s defense can string together a few more runs of their own.