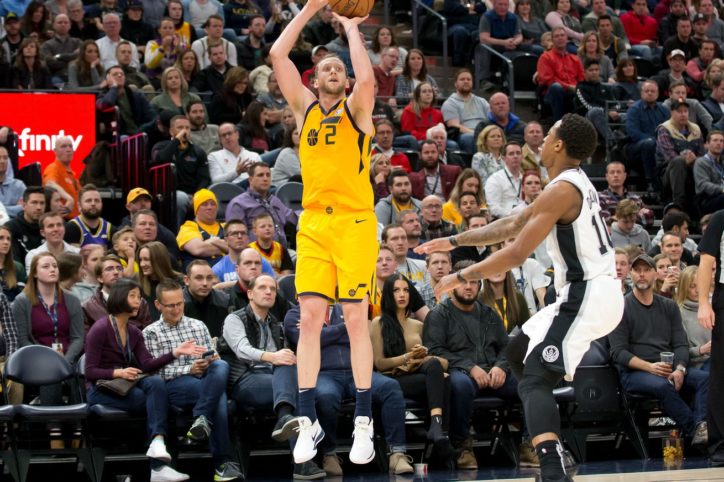 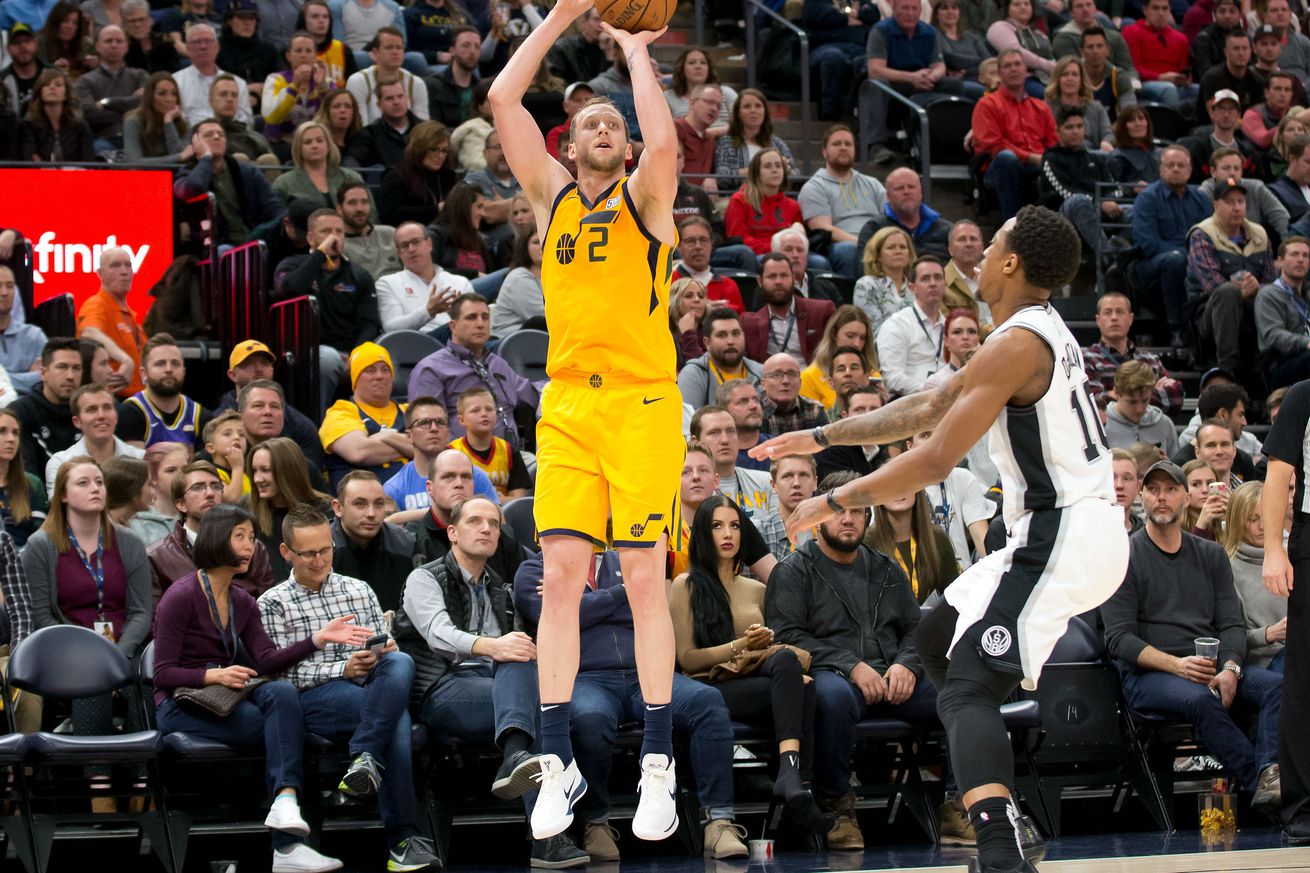 The Spurs have tried an interesting new tactic this year on the defensive end. It’s a lot like the let LeBron shoot move Coach Pop made in the 2013 Finals, except for it’s every player on the other team, and it isn’t working out so well.

Alas, it’s not a part of the game plan, it’s just bad defense, and San Antonio’s inability to contest shots was on full display at the beginning of Tuesday night’s game against the Jazz. Utah exploited the Spurs’ defensive inadequacies in the game’s first three minutes to the tune of 13 points on 7 possessions. The home team didn’t maintain that level of efficiency through all four quarters, (that would have resulted in them totaling 208 points) but an examination of that first Jazz run is a great way of demonstrating the difficulties the Spurs are having on defense

The Spurs’ first defensive possession actually wasn’t that bad, though it was a harbinger of how the Jazz intended to attack the team’s defense.

DeMar DeRozan is guarding Donovan Mitchell, who has the ball on the left wing. Ricky Rubio feigns a pick on Rudy Gay, who’s guarding Derrick Favors, before popping up to the top of the floor to receive the ball while Favors cuts through the corner. Bryn Forbes denies the ball up top, so Mitchell hits Rudy Gobert at the arc who then hands off to Rubio before moving over to set a screen on DeMar.

In years past, this would probably have been called a moving screen, but this year, more and more, screeners are continuing to move through the screening action, and it is rarely called. What’s noticeable here, though, is just how long it takes DeMar to make it over the screen, almost 3⁄4 of second from the time he recognizes the screen until he’s on the other side of it.

The result is that Mitchell has open space in front of him, with Gobert rolling on the left side of the paint, and only LaMarcus Aldridge guarding the rim. Rudy thinks about digging on Gobert, but recovers out to Favors in the corner instead. LaMarcus does a good job of taking up space, and Mitchell pulls up for a floater from 10 feet.

He misses and DeMar grabs the rebound, but that doesn’t make this good defense. Gobert is in excellent rebounding position here, and that he doesn’t grab the board is just a lucky bounce. He’s also in excellent position to catch a lob and it’s a mistake on Mitchell’s part that he chose to shoot instead.

The Jazz ran another Mitchell-Gobert pick and roll on their next play, with better results.

DeMar has a beat to prepare for this screen, and moves up just a little bit in preparation. He clears the top of the screen quickly enough that alongside the rest of the team’s adjustments Mitchell’s only good choice is to swing the ball back to Ingles on the right wing.

Davis Bertans slides down to the corner of the paint with his arms up and is signaling Rudy’s responsibility for the roll man. From this position he can threaten the passing lane out to Favors in the corner and is still able to recover to Ingles in time to contest a shot. Rudy slides just a little farther into the paint, knowing that defending a lob to Gobert will depend on being first to the spot.

Ingles attacks the catch and is moving hard to Davis’ right, but Davis moves his feet and cuts off the driving lane, so Ingles kicks the ball right back to Mitchell on the left wing.

Because Mitchell immediately spaced back out to the three point line and it took DeMar a moment to recover, Mitchell gets an open look from the wing and knocks it down.

The Jazz switched it up the next time down the floor, going with an Ingles-Gobert pick and roll.

There’s a fair amount of off-ball and setup action, but the key to drawing the switch on this play is Gobert’s offensive lineman block on Davis. Once Ingles has LaMarcus out on the left wing, he’s able to drive baseline and force the Spurs to react. Davis stunts towards Ingles convincingly enough to force him to pass, then recovers to Gobert in time to potentially prevent a dunk. Unfortunately, Rudy doesn’t realize Davis’ move towards the left side of the rim is a feint and helps off Favors. That leaves Ingles with an easy pass to Favors in the middle of the paint.

LaMarcus is out of position so he slaps down on the ball instead of contesting, which is probably the right play at this point. He doesn’t have enough lift to get to the ball from here and would likely have drawn a foul and potentially given up the bucket, too.

The issue on this play is a lack of coordination. If Davis commits to stopping Ingles, he’s able to contest the passing lane and Rudy’s help on Gobert makes sense. Alternately, if Rudy knows Davis is going to recover to Gobert, he stays on Favors. Ingles may have taken the floater in that case, and while that’s a high percentage shot, it’s better for the Spurs than either a Gobert dunk or Favors at the free thrown line.

The Jazz were able to get into transition off a defensive rebound on their next possession.

On first watch, it may appear that DeMar’s responsible for this one, too, but he was set up for failure. First, take a look at the moment Gobert grabbed the board.

All five Jazz players are in the paint and all but one Spur are above the three point line, ostensibly getting back on defense. Now watch Derrick Favors jog by Davis Bertans and LaMarcus Aldridge on the left side of the floor just 4 seconds later.

With Rudy picking up Ingles in transition, the obvious answer is for Davis to pick up Favors as he lopes by. Davis is signalling and talking here, though it’s unclear what he’s saying. Regardless, Favors is wide open when DeMar digs down on him in the paint. Both Davis and DeMar make an attempt to close out to the corner, but neither is able to affect the shot, and Mitchell hits his 2nd open three of the game.

The Jazz went back to the Mitchell-Gobert pick and roll the next time they had the ball.

DeMar is unable to make it over the screen again, but LaMarcus is able to lure Mitchell into another floater, from 14 feet this time. Just like the first time, this is not a great decision by Mitchell. Davis and Rudy are helping in as far as they can, and LaMarcus is in good position, so kicking the ball to Ingles in the right corner is a better option, especially with 14 remaining on the shot clock.

Given that DeMar was still on the ground out by half court, Mitchell would likely have gotten a better shot off an Ingles’ drive, though he had no way to know that at the time.

DeMar attempted to make up for it by going for a steal the next time the Jazz brought the ball up court, though that didn’t work out well, either.

After another missed jumper, the Spurs found themselves cross-matched again, and made the exact same mistake from just a minute earlier.

Here’s the moment Rubio gets his hands on the ball.

All five Jazz players are at or below the top of the arc, and three Spurs are already getting back on defense. And yet…

Rudy is trailing Favors, and it looks like LaMarcus is calling out matchups. Rudy appears to respond by curling off to pick up Rubio, but Davis is obviously confused. Even though LaMarcus sees there’s a guy wide open next to the rim, he makes little effort to actually guard him. The result is an easy alley-oop and a Spurs’ timeout.

There’s been a lot of criticism of the Spurs’ defense, though probably not as much as they deserve. It’s fair to discuss their personnel losses and the weaknesses of the current roster, but those aren’t the key issue. Without effort, without communication, without discipline, it wouldn’t matter who was on the roster. At the NBA level, any player can and will take advantage of a disinterested and disengaged defense, and unfortunately that’s what the Spurs have brought to the table on most nights.

The first 3 minutes of this game are an excellent example. While the limitations of some of their personnel were on display in these clips – DeMar’s lack of lateral agility, for one – the thing that takes this defense from meh to awful is the free points they continually give away on simple mistakes. It may soon be time to admit that bad communication and missed rotations are the new normal, if it isn’t already.