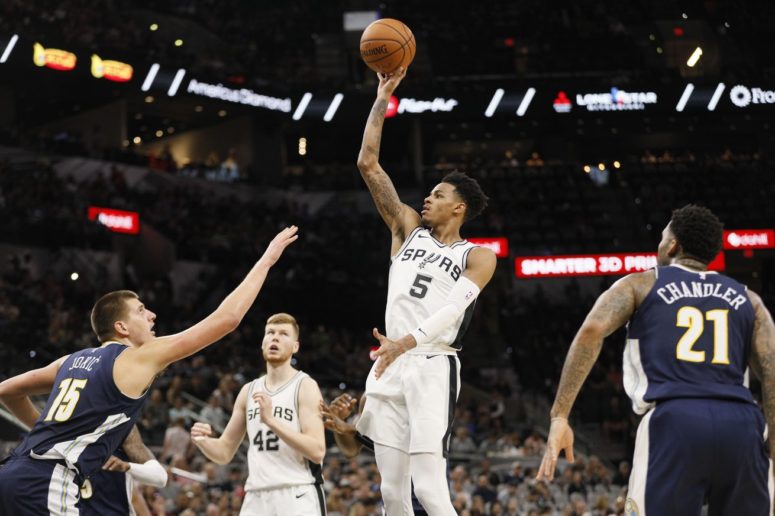 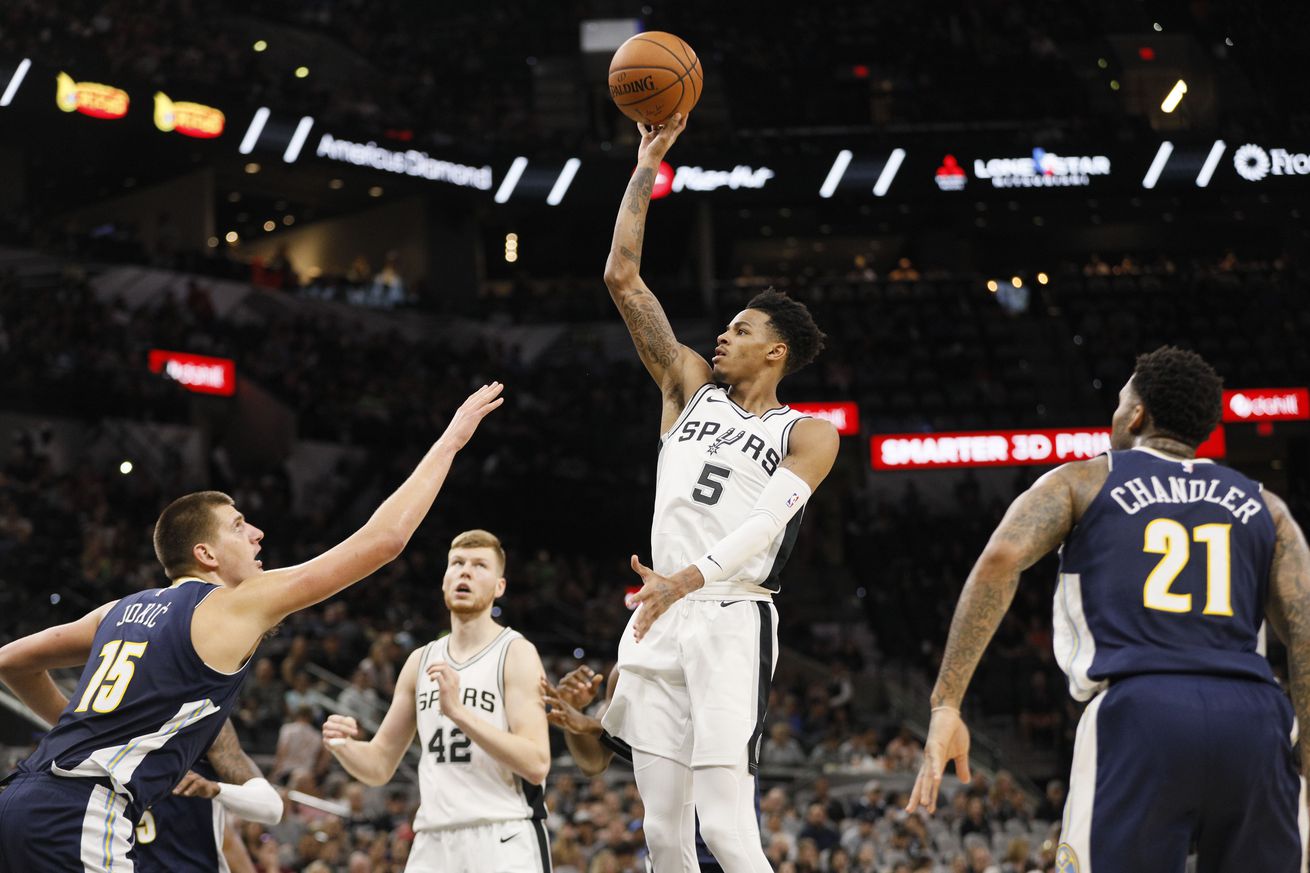 A different stat for each player, and how that number can serve as a benchmark for their season.

No single metric is a referendum on a player’s success, but some can be more telling than others. So I’ve identified a different stat to track for every Spur this season — and a number to benchmark it against — that should provide insight into how successful the coming campaign turns out to be.

Murray’s days in Austin should be behind him, with big minutes and a likely starting role for as long as Tony Parker is out. Lots of playing time is what he needs right now as he focuses on establishing a rhythm in the pick and roll and learns to shape his athleticism against the best players in the world.

While he’s sure to have his moments this season, I don’t expect Murray to rack up a ton of points or assists on a nightly basis, and his percentages may not be great, either. His defense should already be above-average, thanks to his length and some good instincts, but it’s hard to see how that’ll project stat-wise.

In terms of both team success and his own development, I’ll look at Murray’s ability to efficiently create and lead the offense. If he can take a positive step forward with his assist-to-turnover rate in his second year, Spurs fans should be that much more confident in the team having its point guard of the future.

I would have liked to focus on Aldridge’s newfound love for the three ball, which I expect will lead to a jump from 0.8 attempts per game to around 1.5. But I don’t see his success this year being tied to what will still be a marginal uptick.

A big chunk of Aldridge’s touches should still come out of the post, where he’s been in the top five in terms of shot volume for at least the past two years (that’s how far back NBA.com’s tracking stats go). Last season, he took 5.8 shots per game out of the post, the same as in 2015-16. The difference? His efficiency dropped from averaging 1.00 points per possession (84th percentile in the league) to 0.87 (45th).

The Spurs will look to make Aldridge more comfortable this year, both at the elbow and low post. Project Spurs’ Paul Garcia did a great job identifying some of the screen action they’re using to get him the ball in better situations, and you can expect to see wings consistently getting a body on his defender before he receives the pass. There should also be a bit more high-low action against defenses that front him, especially with the sweet-passing Gasol spotting up at the three-point line.

This is a noisy stat, I know. Last year, Kawhi’s defensive rating was famously, uncharacteristically high, and he still finished as a finalist for Defensive Player of the Year. The reason being: the other four guys a player shares the floor with matter, and lineups are only as strong as their weakest link.

But Gasol was one of those weak links for much of last season. That was most evident whenever he was put in pick-and-rolls with the aging Parker, or forced onto switches on the perimeter. It was also his first year in a new system, and his finger injury and a move to the bench didn’t help either.

Following a return to the starting lineup, maximizing Gasol’s skills will be as much about the Spurs’ system as it is about him. In the series against the Rockets, Pop found huge success against Houston’s pick-and-roll attack by letting Gasol hang back and simply funneling ball-handlers into his massive wingspan.

According to NBA.com, Gasol’s defensive rating was 104.7 as a starter and 102.6 as a reserve. I’ll set his over/under in the middle, but remain optimistic that he’ll be even better.

For a guy like Mills, the biggest leap to make might be a small one. He may never be a true playmaker off the pick and roll — he’s not tall enough to pass over most defenders and not quick enough to consistently get past them — but he can still be lethal pulling up and forcing teams to overplay him on the perimeter.

Last year, the Bala averaged 0.76 points per possession as a pick-and-roll ball-handler, placing him around the 42nd percentile. These play-type stats don’t fully capture a player’s ability to generate offense for others, but the eye test suggests that’s not been a strength of Mills’ anyway. I’d expect a greener light for him to fire away off the dribble in 2017-18.

Once he’s back, Parker will not only join a crowded backcourt but a team that will have adjusted to life without him running the show. Sentimentality will only matter so much in getting him reintegrated and, if his recovery takes longer than expected, there could be multiple guys with a case to stay above him in the rotation.

Not only is that when Forbes’ contract becomes guaranteed for the rest of the season; it’s also close to the time when Parker is due to return — and that matters for the team’s de facto third-string point guard. Forbes has been fun to root for through a productive summer and promising preseason, and the big thing the coaching staff wants out of him is a willingness and awareness of when to let it fly.

A high-energy player who already seems at home in the Spurs system, JoLo can impact the second-unit offense in a lot of ways. He’ll run the floor hard, set good screens, finish on rolls, shoot the occasional three, and spin-move defenders into oblivion.

Where he’s really impressed is as a playmaker. He’s great passing as a roll man (something David Lee was especially good at least year), and also out of the post, where he’s been given early license to direct traffic and make the most of the bench unit’s terrific off-ball action.

Pop seems committed to playing Bertans at the four. Offensively, that makes all kinds of sense: he’s a 6’10’’ sniper with range that comfortably extends three or four feet beyond the arc. And he’s not too shabby when he has to put the ball on the floor, either.

But it comes with drawbacks. Bertans’ frame is about as slight as it gets, and opponents will look to bully him inside, just like they did last year. Pop said Bertans has been working on his defense and rebounding, and hopefully we’ll see the fruits of that this year.

As a rookie, the Latvian pulled down 10.5% of defensive rebounds, an alarmingly low rate for a power forward. For perspective, here are a few teammates who ranked higher: Kyle Anderson (18.5), Kawhi Leonard (16.0), Dejounte Murray (11.7) and Manu Ginobili (11.3). He’ll need to get that number up if he’s to become a bigger part of the rotation.

Last year, everyone’s favorite Spur remained effective thanks to his outside shot and an evergreen drive to scrap on defense. But he was inefficient from within the arc, shooting 38.7% on two-pointers, down from 49.6% the season before. That happens as players enter the twilight of their careers, and Manu is now 40. He’ll still look to hit that lefty floater of his, often when he comes off curls, but teams will have more incentive than ever to chase him off the three-point line. What he does from there could determine how serviceable he is.

At 30 and coming off an Achilles injury, how much athleticism does Gay have left? The eye test will tell us more than anything, but we can also get a snapshot from how often he gets to the basket and finishes. Through most of his career, Gay’s averaged around a dunk per game. Here are the numbers from his last four seasons, in Sacramento:

It makes sense for that average to go down some, but a significant drop will be telling of what type of player he is post-injury. It doesn’t mean he can’t still be effective, but it could signal he’s entered a different stage in his career.

I’ve long professed my appreciation of Anderson’s unconventional game and a desire to see the ball in his hands more. In his third season, despite improvements in a number of statistical areas, Anderson’s usage rate dropped from 14.4% to 12.9%.

Slow Mo has developed into a solid defender, sliding between the two, three and four spots as needed. But it’s also come with being a fourth or fifth option on offense. Used in such a way, it’s no surprise that he continued to collect DNPs in 2016-17. This year, however, Gregg Popovich finally seems set to expand his role:

“I’m going to try real hard for his sake,” Popovich said. “He deserves it. I’ve been remiss about figuring it out sooner.”

That should mean good things, both for the Spurs’ offense and Anderson’s career if he doesn’t get an extension and heads into free agency next summer.

The Spurs see Paul as a defensive specialist, less in the mold of a Jonathon Simmons, Pop has said, and more a la Bruce Bowen. Paul is long and quick enough to contain most wings on the perimeter, but he’s also able to body up guys in the post. The upside is there for him to be a solid contributor on both ends of the floor; the only question if just how much of an opportunity he’ll get this year.

Green’s defense is as reliable as it comes, and he finally got some love last year with an All-Defense nod. For the man they call Icy Hot, the greatest variance is how often those looks drop. After two sub-40% seasons, it would be a boon for the team if he get his percentage back up to around his career average of 40%.

The team loves White’s all-around game, but he’s a rookie on a team with a number of talented wings. His opportunities may be limited, and I’d expect him to spend far more time honing his game in Austin in year one.

Is it that simple with Kawhi? Sort of. Leonard’s talents have improved every season, and there’s no reason to think he can’t sustain his MVP-level impact and win his first Maurice Podoloff trophy this year. The biggest caveat right now is his health.

Leonard is steadily rehabbing his quadriceps tendinopathy, having been held out of preseason competition and due to miss the regular season opener on Wednesday. Throughout, his progress has been mired in uncertainty and his teammates have been unable to shed any light on the situation. Last season’s 74-game total is the most Leonard has played in his six years in the NBA. If he hangs around there or better this season, he should remain the favorite to win MVP.