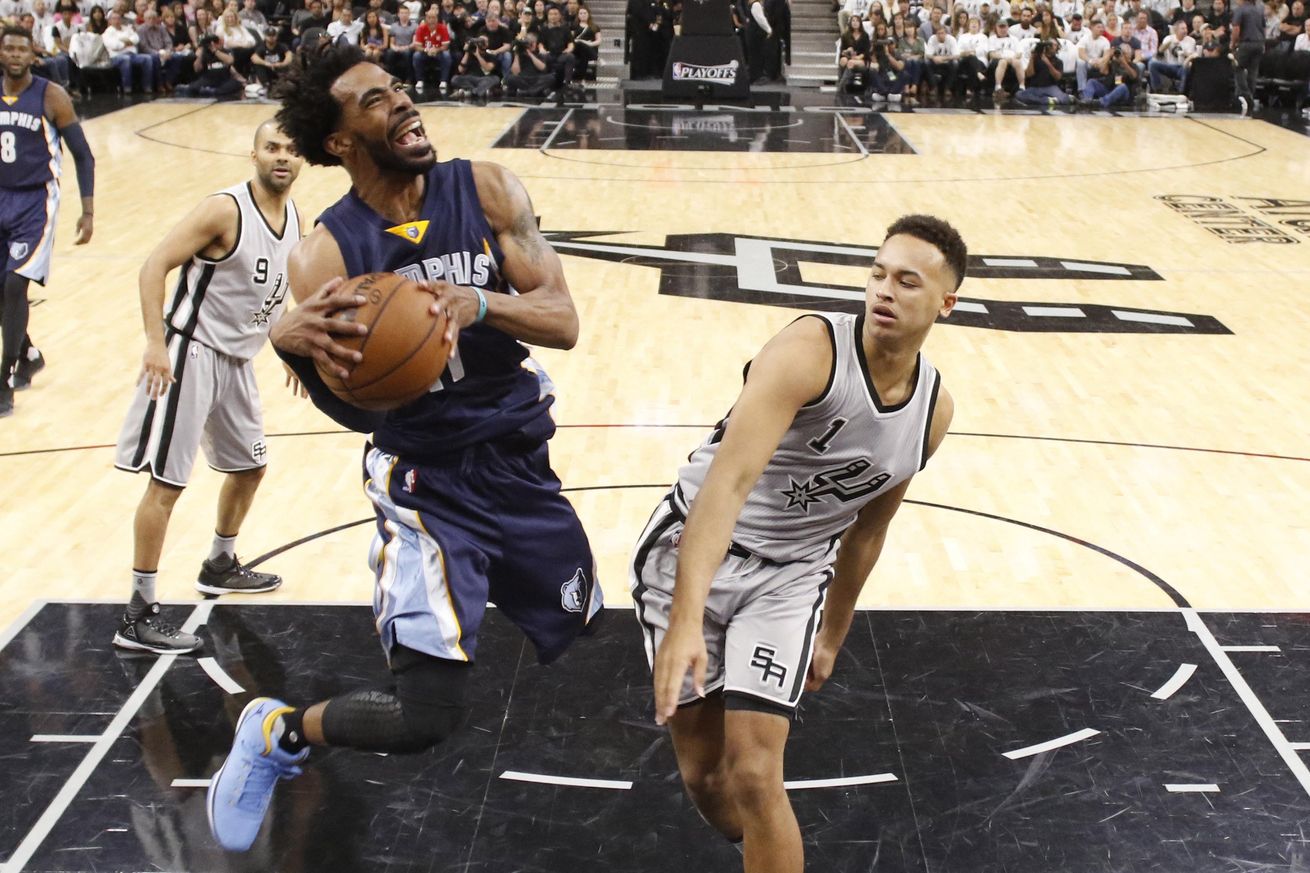 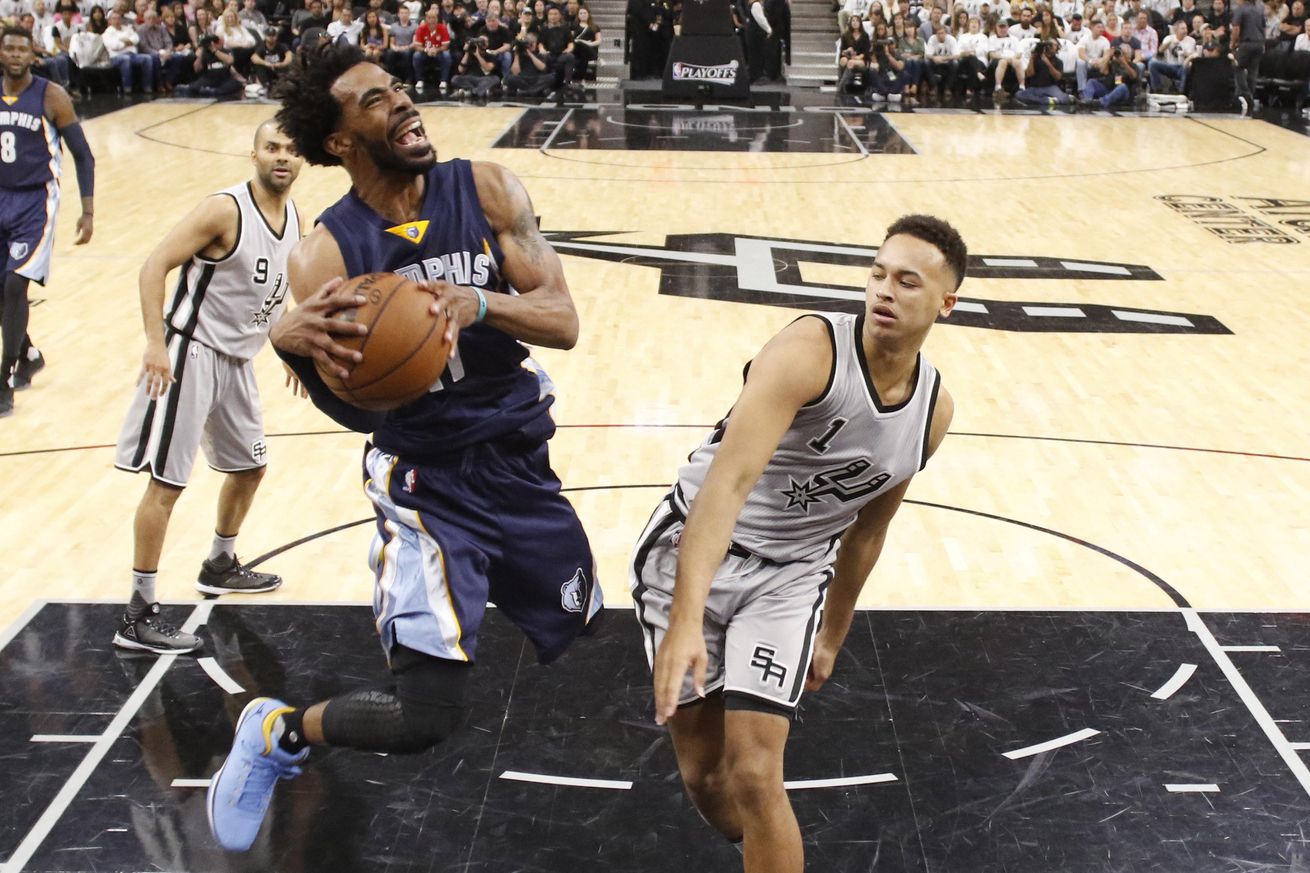 Memphis is being called for the fouls they’re used to committing. That shouldn’t surprise anyone, least of all a data-driven head coach.

After having watched all or most of 13 postseason games so far, I believe the only rational reaction is “Man, what even are these playoffs?”

Small sample sizes, to be sure, but here’s a brief snapshot in time of where we are:

The Curry brothers are worse at shooting threes than the Gasol brothers. Kawhi Leonard isn’t even the best three-point shooter from his high school, but he is essentially DeAndre Jordan inside the paint, Michael Jordan from mid-range and Steve Nash at the free-throw line. Patty Mills is no longer the best three-point shooting point guard on the Spurs and not even the second-best from the cast of points from their last title-winning team. (Miss you, Cory.)

Okay, so Marc Gasol, the better galoot, has extended his shooting range. Younger brothers always wanting to follow in their older brothers’ footsteps and all that. Still, the Grizzles, for the umpteenth straight season, have no perimeter talent. Vince Carter, 40, is their best wing. That’s not a recipe for success. In their defense, they tried in the off-season, signing Chandler Parsons. It just didn’t work out.

Misfortune for Memphis equals serendipity for the Spurs. Leonard has been brilliant, exploiting every crack of daylight he sees like Barry Sanders on a meth binge. Danny Green has been a savage at both ends. Tony Parker and Pau Gasol can’t miss from outside. The defense has been stifling, partly because they’re, you know, good, and partly because the Grizzlies don’t exactly offer cornucopia of offensive wizardry. Their offense is a blunt instrument, trying to bludgeon the opposition with the least-efficient shots in the game, and then wondering why it doesn’t work.

It was cute and predictable that Grizzlies coach David Fizdale went on a rant about the officiating after Game 2, and just so, transparent. Memphis was the second-most foul prone team in the league during the season (22.4) and also second-most in opponents free-throw attempts (26.9). Conversely only six teams fouled fewer than San Antonio (18.3 per game) and Spurs opponents averaged just 20.8 free-throw attempts per game.

Through two games the Grizzlies have been called for an average of 21 fouls and allowed 28.5 free-throw attempts while the Spurs have been whistled for 16.5 fouls that have resulted in 16.0 free-throw attempts. Nothing too anomalous there, I’m afraid. Sure, Conley probably deserved a couple of calls in Game 2, but it seems odd to grouse about your guy not being treated like the star he is when he’s got zero All-Star appearances on his resume. Conley’s a very good player, perhaps Memphis’ best player, but let’s not get carried away here. The only guy getting “star” calls this series has been Leonard, with 28 of San Antonio’s 57 attempts.

And guess what? He’s getting fouled! Any chance the Grizzlies had of defending Kawhi ended when it was announced that Tony Allen would be out with a strained calf. Carter, James Ennis, Wayne Selden… these dudes don’t have a chance. Nor does it help the Grizzlies that they don’t exactly have a foreboding rim protector.

Bottom line: The best way to draw fouls is to be a driver who’s a threat to finish above the rim. Marc Gasol is not that. Zach Randolph certainly isn’t. And neither is Conley. Below-the-rim bigs aren’t going to get respect from the zebras in the playoffs, especially against a team with a non-fouling reputation like the Spurs.

Fizdale can use the free-throw disparity to try to inspire his team but it’s not going to change the composition of his roster or the Spurs’. A more useful tactic would be to make sure his guys tighten-up their double-teams of Leonard and to hope and pray the Spurs go cold from outside.

Then again, maybe Fizdale has a point about his team being disrespected. I can’t believe he only got fined $30,000 for his remarks, which included calling the crew “unprofessional.” I was expecting at least $50,000. Fining him just 30K for that is like the league pinching his cheeks and going “D’awww, look at you trying to campaign for calls like a big boy coach.”

Anyway, more interesting to me than this series, which already feels over but for the crying, is how the Spurs will react to it going forward. As I wrote in the playoff preview, match-ups matter. Gregg Popovich is playing it safe, conservative and conventional against the Memphis, because this isn’t a series for frills. He’s sticking with two bigs. He’s playing the steadier, less boom-or-bust fourth wing in Kyle Anderson over high-flying Jonathon Simmons. We’re getting David Lee instead of Davis Bertans.

Assuming Houston is the next opponent, I don’t think the same tactics will work. The Rox will annihilate that second big with their high-octane spread attack. The plodding Anderson will give defensive-challenged people like James Harden or Lou Williams somewhere to hide and will have trouble keeping up with the pace. Lee won’t be able to spread the floor the way Bertans can. It’s fine and good for the Spurs to play this way and with this rotation against Memphis, but I sure hope that Pop isn’t married to it and that he isn’t going to wait for a loss or three in the next round to adjust but rather that those tweaks will be proactive.

(That sure hasn’t been the case historically, though, just sayin’.)

As for the other series:

Are we sure that Toronto-Milwaukee isn’t the Eastern Conference Finals hidden as a first-round matchup? They sure look like the two deepest, most talented rosters in the conference. The Bucks might be my pick to be the next Eastern team that lifts the Larry O’Brien trophy, oh, three, four years from now, after the Warriors’ dynasty fades. Giannis Antetokounmpo is just so damn good. The Raptors have to load up so aggressively to stop him from dunking on them at will, and they’ve got quality defenders on the wing in DeMarre Carroll and P.J. Tucker.

The Raps had their usual Game 1 flame-out to start the series and let The Greek Freak do whatever he wanted. He, Thon Maker and Malcolm Brogdon were sensational and the Bucks won easily. In game two the rookies looked more like rookies and the Raptors got serious about keeping a phalanx of bodies between Antetokounmpo and the rim.

Here’s the thing: The Raptors played as well as they possibly could in Game 2. Kyle Lowry scored inside and out. DeMar DeRozan was nailing his mid-range J’s. Serge Ibaka was giving me PTSD from his Thunder days. Jonas Valanciunas was bullying Maker down low. Joseph, Carroll and Tucker couldn’t miss from outside.

And yet the Bucks were right there with two minutes to go. All the attention paid to Antetokounmpo freed up Snell, Khris Middleton and Matthew Dellavedova from outside. If Delly hit a wide-open three late, they might have won. And the Raptors have zero answers for Greg Monroe killing them inside off the bench.

This will be a fantastic series.

I can’t say the same for the other Eastern match-ups. Every Celtics fan’s nightmare is coming true so far in their 1-8 match-up with the Bulls, but I tried warning y’all that this was going to be a tough one for them. Chicago not only has the best player in the series but Boston’s best guy is 5’7. I’ve got all the respect in the world for what Isaiah Thomas is going through, having tragically lost his younger sister, and he’s been great so far in these two games. He’s not the problem here. The reality though is if your best player is 5’7, he better be Lionel Messi.

The Celtics ran into a bit of a buzz-saw here not only because of Jimmy Butler but also a supremely motivated Rajon Rondo can still do some damage against teams soft inside. They’re also getting destroyed by Robin Lopez, which is really calling into question that contract they gave Al Horford over the summer. Horford’s facilitated Boston’s offense as a high-post fulcrum —both he and Kelly Olynyk have been the playmakers here— but they’re getting abused on the other end. The Bulls have also benefited from unexpected reserves going off in each of the first two games, Bobby Portis in Game 1 and Paul Zipser on Tuesday.

There’s still time for Boston to turn this around. They’re still the deeper team overall and their advantages on the bench and the three-point line should bear out over a long enough timeline. But I don’t think they have much of a postseason future even if they squeak past Chicago. There’s just not much two-way star power here.

Meanwhile in Cleveland-Indiana I haven’t seen anything from the Cavs that’s remotely reassuring. They haven’t been able to stop the low-watt Pacers from scoring even with Myles Turner not doing much of anything. They can’t stop Lance Stephenson, man. The Cavs continue to be top-heavy, with their big three combining for 72 and then 89 points in the two games, but this doesn’t at all portend well for them in round two. I’m curious how they’ll play on the road in Indy, actually.

Washington-Atlanta have only played one game so far and this is the series of least interest to me, through no fault of the Wiz. The Hawks are the Eastern version of Memphis. I just can’t take them seriously with what they’re trotting out there at the wings. The only thing that kept Game 1 close was how shoddy Washington’s bench was, getting lit up by the likes of Ersan Ilyasova, Mike Muscala and Kent Bazemore. If that continues through the series, it will limit the Wizards’ playoff ceiling. Right now the brackets are set up for them to make the conference finals at minimum, but not if their reserves can’t hang.

We’re seeing a similar story play out in the West between the Clippers and the Jazz. Even without Rudy Gobert, Utah’s bench, led by Joe Johnson and Rodney Hood, are keeping them in the games because their counterparts on L.A. are hopeless without the injured Austin Rivers. The 6-9 players Doc Rivers is throwing out there, on purpose, are Marreese Speights, Jamal Crawford, Raymond Felton and Paul Pierce. There’s no way they won’t hemorrhage points. Chris Paul has been otherworldly, as usual, but he needs help from J.J. Redick and for Blake Griffin to grab an occasional rebound maybe. I feel awful for the Jazz; Gobert’s injury really doesn’t give them a chance here, and what’s worse is that it sure looks like Derrick Favors will struggle to make it through a long series too. He can barely move out there.

There’s been just one game played in the Portland-Golden State and Houston-Oklahoma City series, but so far everything has been par for the course. No one can score for the Blazers but their guards and they can’t stop anybody on the Warriors from doing whatever they please. With or without Kevin Durant that’s not going more than five games. Even getting Nurkic back would change the calculus offensively for the Blazers but won’t help them on the other end.

As for Rox-Thunder, Russell Westbrook continues his mystifying habit of being awful in Game 1’s. He couldn’t have played any worse on Sunday and it speaks to Billy Donovan’s powerlessness that he lets Westbrook jack up over 10 threes every game. Why do the Thunder even have a coach at this point? The Thunder were tactically overmatched by Harden, who rendered Andre Roberson defensively irrelevant —Roberson, unguarded all game actually scored 18 on the other end — by forcing switches time and again and gorging against Enes Kanter and Steven Adams. Roberson’s outburst was more than neutralized by Patrick Beverley’s 21, and ditto for the reserve big-man duel between Nene and Kanter. The Thunder need Westbrook to be better certainly, but Victor Oladipo has to wake up too.