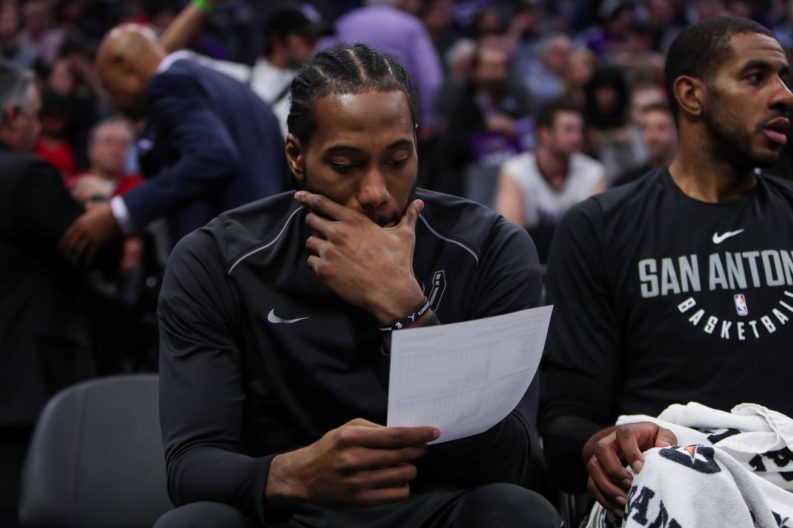 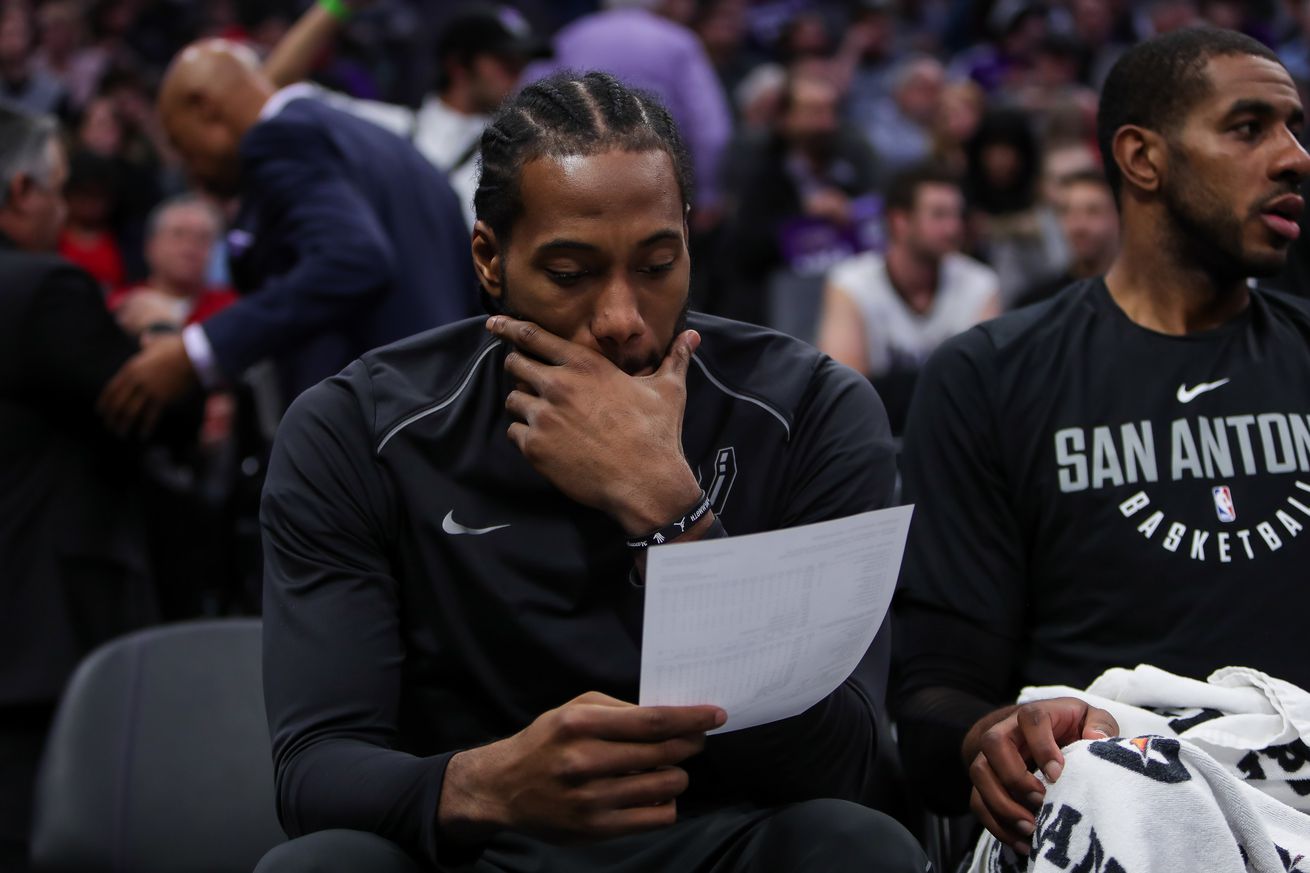 Last week’s news of Kawhi Leonard being shut down “indefinitely” not only places an indefinite hold on the hopes of a deep playoff run, it also raises a number of other questions as to what can happen this season and beyond.

As with anything in sports, there’s a spectrum of outcomes still in play; after all, if the roll of a six-sided die can produce six diverging timelines, how many does a basketball, with its countless touch points, generate with each bounce? It’s enough to make my Kyrie Irving brain spin.

Because they’re the Spurs, our worst fears have reasonable limits: the team is culturally and structurally ill-disposed to bottoming out. There are trenches built to withstand any advanced talks of “tanking”, and the coaching and talent level should keep the team’s floor relatively high.

What no team is averse to, however, is the kind of organizational inertia that an injury to a superstar can present, especially one as head-scratching as Leonard’s tendinopathy. It’s an abundance of that uncertainty that could drive us down the worst of paths in 2018.

The Spurs don’t make any moves at the trade deadline, because why should they — a full-strength squad, which is still in the cards, can still be dangerous come playoff time. Even if it’s the right decision to make in the moment, the team, with both eyes fixed on Leonard’s quad, misses out on kicking the tires on deals that could’ve had long-term benefits.

Instead the focus remains on winning, along with Dejounte Murray’s development as the team’s new starting point guard. Unfortunately, the latter remains at odds with the former through the rest of the season, as the young guard’s ups and downs continue a downward trend in the standings.

Well, that wasn’t too bad. After a month in street clothes, gratuitous replays of the Harden Block on Feb. 1st (vs. Houston) and the Zaza Play on Feb. 10th (at Golden State), Leonard’s name appears as Probable in the first team injury report coming out of All-Star Weekend. And no one should be all that surprised, either — even Gregg Popovich himself said we’d be seeing the star forward again this season:

On one serious note, Pop reiterated that shutting down Leonard “indefinitely” did not equate to shutting him down “for the season.” The team expects he will play again.

Pop, on why the decision to shut down Leonard without a firm timetable: “We said ‘indefinite’ just so I didn’t have to keep answering your questions every day.”

In his first action in over five weeks, Leonard looks terrific — maybe the best he has all season — showing considerable burst as he drops 25 points in just 18 minutes against the Nuggets. The Spurs, collectively looking more refreshed than ever after an extended All-Star Break, win by 20 and prepare to close the Rodeo Road Trip on a high.

We learn, just a few hours before tipoff against the Cavaliers, that Leonard’s body didn’t respond well the day after his first game back. He sits out the nationally televised game, and the Spurs lose by 25. He also does not play another game this season, a fact that materializes gradually, frustratingly, over the coming weeks.

There was a timeline in which LeBron James considers a move to San Antonio, but this is not it. Maybe it was the sight of Leonard in street clothes and the shroud of uncertainty surrounding Pop’s coaching future; maybe it was seeing his own team begin to put things together; whatever it is, there is a brief but conclusive moment in James’ mind, where definitively eliminates the possibility of coming to south Texas this summer.

Fans spend the next month eyeing injury reports for a glimmer of hope, but none comes. In most timelines, surgery is a final recourse that Leonard is able to avoid. In this one, the 26-year-old decides to do it, putting him officially, definitively out for the rest of the regular season and playoffs.

Mid April: Sputtering down the stretch

After a grueling final month-and-a-half, the Spurs end the season as the sixth seed with a record of 47-35. It’s not a terrible number all things considered, but it means the end to Gregg Popovich’s incredible, 18-season streak of winning at least 50 games. At the same time, the Spurs also break the streak of seasons with a road record above .500, one that goes back to the 1996-97 season. Spurs fans take to social media to wallow in the pall of this newfound mediocrity, awaiting the sympathy from fans of other teams that never comes.

To remain competitive and avoid missing out on the playoffs entirely, the Spurs aren’t able to let up off the accelerator in the final weeks, and Pop is forced to play guys like Pau Gasol, Manu Ginobili and Tony Parker more minutes than he’d like.

The Spurs end up in a 3-6 matchup against the up-and-coming Minnesota Timberwolves, and appear spent by the second quarter of Game 1. The two remaining members of the OG Big Three, taxed by the final stretch of the regular season, flame out in the first round, as an offensively challenged San Antonio team loses in five to the up-and-coming Minnesota Timberwolves. Ginobili’s struggles mirror those against Memphis in 2017, and fans enter the offseason with renewed dread that this is indeed the end for number 20.

LaMarcus Aldridge averages 28 and 9 in the series, but misses a pair of free throws down the stretch of Game 4, and that’s all anyone ever remembers. You prepare for another confounding summer of defending him on Twitter.

Rudy Gay plays well enough that he’ll likely opt out of the second season of his contract and chase a more lucrative deal. Kyle Anderson’s numbers are also better than they would’ve been in a truncated role, and it’s clear that a totally-fair-but-probably-bigger-than-it-could’ve-been contract is in the cards for him as well, either in San Antonio or elsewhere.

May: Drums in the deep

The worst possible rumblings emerge as the Spurs offseason begins: Kawhi Leonard isn’t happy, an affirmation of Monday’s somewhat-vague reports of a widening distance between team and player.

Fans grow restless, trade rumors are recklessly thrown around, and the tension builds into June as the general course of the franchise is put under serious scrutiny. Only one detail remains for us to confirm that this is indeed the Darkest Timeline.