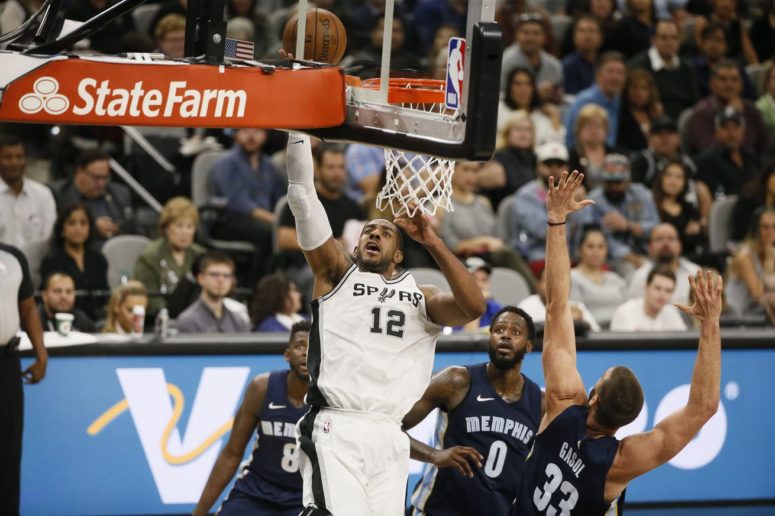 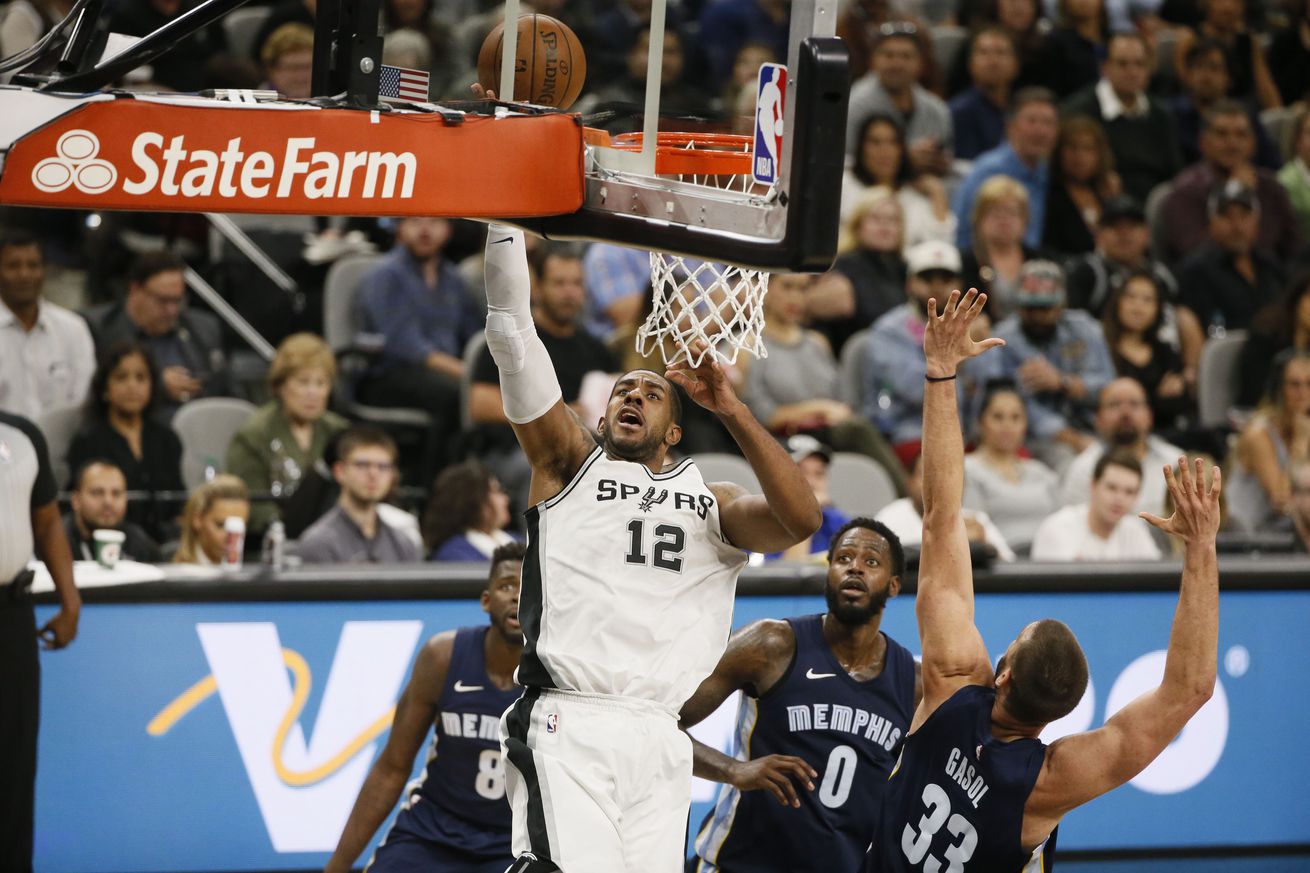 Earlier this season, ESPN writer Zach Lowe revealed a mostly innocuous bit of inside basketball chatter when he published an exchange he had with a Spurs official regarding the team’s move for Pau Gasol.

I was underwhelmed [with the Gasol signing]. He was astonished anyone could feel that way about even the creaky, aging version of Gasol. “He knows how to play,” the official said. He kept repeating that. He seemed confused that I didn’t find “knowing how to play” a super-compelling reason to sign someone.

Lowe’s skepticism with such a basic explanation for an expensive and somewhat lengthy investment in a player in the twilight of his career isn’t all that disagreeable. But as he later noted, seeing five players who know how to play operate on the court together looks a lot more impressive than it sounds.

When searching for reasons why the Spurs find themselves third in the tough, if slightly diluted, Western Conference after a quarter of the season despite Tony Parker’s lengthy absence and Kawhi Leonard’s ongoing recovery, the most obvious answers are the tremendous individual play from LaMarcus Aldridge and their savvy and collective defensive approach.

The easiest answer, however, might just be that the Spurs still have a bunch of guys who know how to play.

Because when you have a bunch of guys who know what they are doing, brilliant, beautiful and, perhaps most importantly, simple basketball materializes naturally, almost out of thin air.

This is the essence of patient basketball. All five guys touch it. Everyone on the perimeter holds it longer to make the defense react until the best shooter is open in the best spot. pic.twitter.com/SB3TwWzSmy

Two minutes into San Antonio’s game against Memphis on Wednesday night, Tony Parker pushed the ball up the floor after Pau Gasol secured a defensive rebound. Within 10 seconds, the had ball rotated from one side to the other, every Spur on the floor had touched the ball and San Antonio had acquired one of the most efficient shots in basketball without calling a play or setting a single screen.

Parker’s initial pass ahead to Danny Green helps sets the tone for the Spurs on this possession, and even though it seems completely harmless, it is critical because it sets Memphis back a split second as the Grizzlies attempt to get organized defensively. It might be easy to overlook, but with the Spurs, tiny cuts so often prove to be fatal..

As Danny receives Parker’s pass on the left wing, JaMychal Green gets his arms high so Danny has no space for his favored transition three. Crucially, though, Green-on-Green is not the defensive matchup Memphis is looking. JaMychal is supposed to be guarding LaMarcus Aldridge, whose rim run off the rebound has forced a cross match with Tyreke Evans.

In the time it takes for Danny Green to pass the ball up to Pau Gasol, who was the last Spur to arrive in the front court after securing the rebound, at the top of the key, JaMychal Green and Evans will recognize the need to switch and start moving toward their correct man.

Knowing how deadly a passer Pau Gasol can be, Evans hangs around on the backside of Aldridge for an extra beat to ensure JaMychal Green can get into position to deny an entry pass to Aldridge. Unfortunately for Memphis, once they started switching Gasol was never looking to find Aldridge down low, because the Grizzlies’ desperate swap had just opened an even more profitable set of possibilities.

Instead of looking inside, Gasol tossed the ball back to Green, who was open again on the left wing. As Green catches the ball and brings it into his shooting pocket, you can tell he has already spotted Evans sprinting at him to close out, exposing his vulnerability to the baseline drive.

When Green puts the ball on the floor, showcasing his improved handle with a confident lefty drive, JaMychal Green lurks off of Aldridge on the baseline, Marc Gasol cheats off of his brother around the free throw line and an overeager Dillon Brooks darts from the opposite wing toward the paint.

Danny Green has made incredible strides as a finisher this season, but he’s not LeBron James, and now that the Grizzlies have all five defenders in or around the paint, he makes the simple pass to Pau Gasol at the top of the key.

From here, the Grizzlies are in scramble mode, and though you might have expected the peak Grit-n-Grind Grizzlies to scrap their way into the right spots to at least contest the Spurs on this possession, without the insane lateral quickness and impressive defensive instincts of Mike Conley and Tony Allen on the perimeter, Memphis was left chasing shadows as the Spurs unleashed a trademark string of hot potato passes.

Kyle Anderson’s role here is small, but significant. He never lifts the ball to shoot, instead pausing until the very second JaMychal Green took a single step in his direction. As soon as that commitment was made, it meant Aldridge would be free in the corner, and given Anderson’s recent playmaking form, you’d bet your house on him making the that final dish.

Aldridge’s intellect on this play is commendable as well. Having started the possession with somewhat of a faux post-up on the smaller Evans, which forced that crucial switch early on, watch him as he drifts toward that corner spot as soon as JaMychal Green’s attention is stolen away on Danny Green’s drive.

It’s a basic but vital spacing concept, and his awareness of the situation is impressive; he recognizes how the dominoes are going to fall as soon as Green kicks the ball to Gasol and positions himself properly for the best possible shot. The benefit of his time with the Spurs is that he has become accustomed to taking a couple of extra steps back for the corner three whereas that baseline midranger used to be his bread and butter in Portland.

In the end, these were just three points of a season-high 41 that Aldridge poured in against Memphis, but even though Aldridge hit a number of more difficult (and more important) shots in this game, I wouldn’t argue with you if you said this bucket was his most enjoyable. So much of San Antonio’s success during the Gregg Popovich era has been derived from a group of individuals mastering the simplicities of the game, which leads to a collective effort that is often too complex for the opposition.

In other words, the Spurs just know how to play the game.