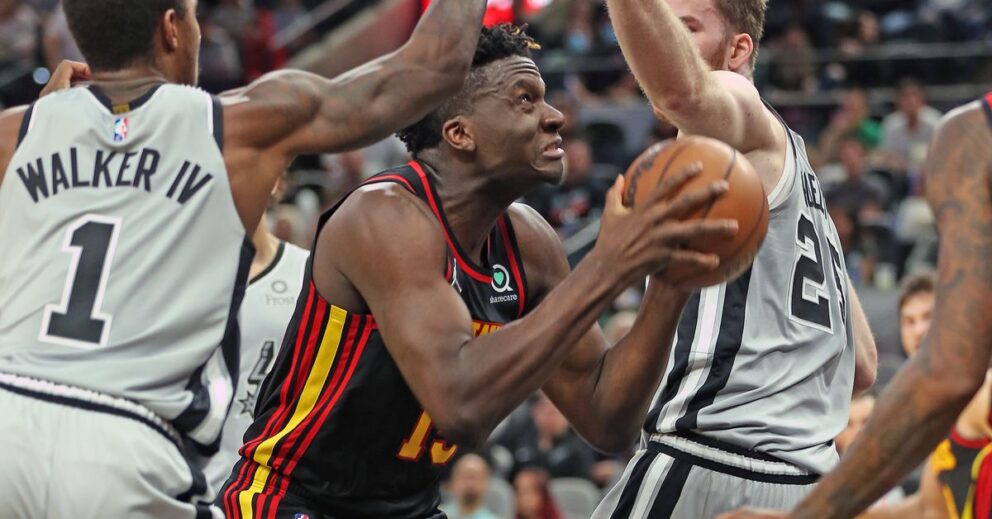 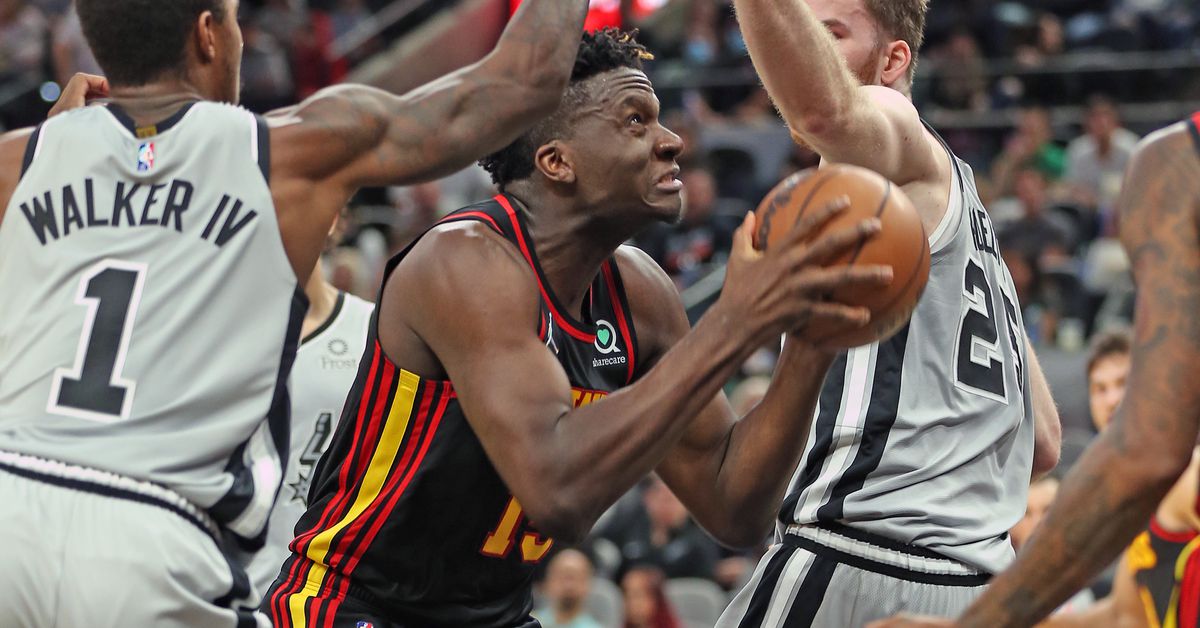 The Spurs started the game tonight doing a lot of good things, playing with energy and shooting and hitting more three point shots, but the Hawks turned on their offensive firepower at the end of the first half and the Spurs offense fell off a cliff in the third quarter as Trae Young and the Hawks blew the Spurs out of the gym with hot shooting from all over the court. Dejounte Murray played another solid game for the Silver and Black, and Bryn Forbes had his best scoring night of the season with 23 points, but the inability to keep the Hawks from scoring at will made all of that academic. It was a bad loss for the good guys, and is bound to leave a bad taste in the mouths of the team at tomorrow’s Thanksgiving celebration.

The game started out with a missed dunk from John Collins, but on the following possession, Keldon Johnson showed him how it’s done by driving it to the hole for an easy Spurs score. The Spurs played with a bit of fire to start the game, and there were no easy baskets to be had for the Hawks early as Jakob got his hands on every early shot attempt. With Vassell, Murray and Keldon all hitting triples, the Spurs surged to a 6 point lead. The biggest highlight of the quarter was Eubanks following his missed three-point shot for an easy layup to put the Spurs up 27-20. Unfortunately, in what’s become a repeatable pattern, the Hawks outplayed the Spurs to finish the quarter and it ended up on a 7-0 Hawks run to be tied at 27-27 at the end of one.

The Hawks started off the scoring for the second quarter for their first lead of the game, but the Spurs came back with Bryn Forbes scoring 11 points for the Silver and Black to bring them back in the first part of the quarter. The Hawks offense was not to be be denied as they kept the game even by taking the ball inside and converting Spurs mistakes into Hawks points. Once again, the Hawks closed out the quarter strong, partly fueled by a questionable loose ball foul on Jakob Poeltl that took away a sure Spurs possession, and the Hawks led 65-58 at the half.

Dejounte started off the third quarter with a triple to cut the lead to 4, but Trae Young’s scoring ability and Spurs mistakes gave the Hawks a 20 point lead, as the Spurs couldn’t hit the ocean, and the Hawks hit everything they looked at, and the Hawks led 103-83 after 3, with Lou Williams hitting a wide-open three to end the quarter.

The Spurs scored the first seven points of the fourth quarter, leading to a quick Hawks timeout, up by 13 points. Do you believe in magic? Yeah, me neither, but I really enjoy watching the team show some fight, even if it’s too late to change the outcome of the game. The Hawks weathered the storm, and put the game back out of reach because the Spurs couldn’t get stops, and even though the Spurs improved their scoring late, the lack of defense was a killer as the Hawks closed it out and won 124-106.

The Spurs record is now 4-13 and after a day off tomorrow to celebrate Thanksgiving with the family, they return to action on Friday to face the Boston Celtics at 7:30 in the AT&T Center. The game will be on KENS-5, so get out your antennae for the local broadcast.

I wish every one of you a happy Thanksgiving, and I’m thankful for all of you, the fans, and my editor, Jolly Roger Wilco and all of the other writers and staff on Pounding the Rock. I’m also thankful for my Spurs, even though I have to admit that it can be frustrating to watch them at times.