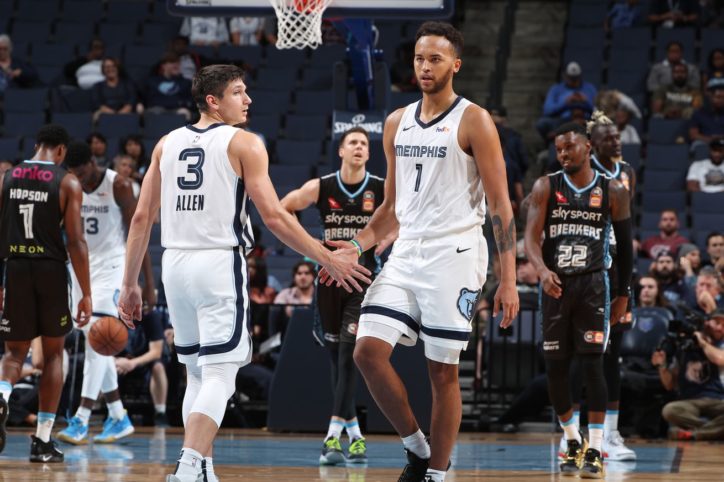 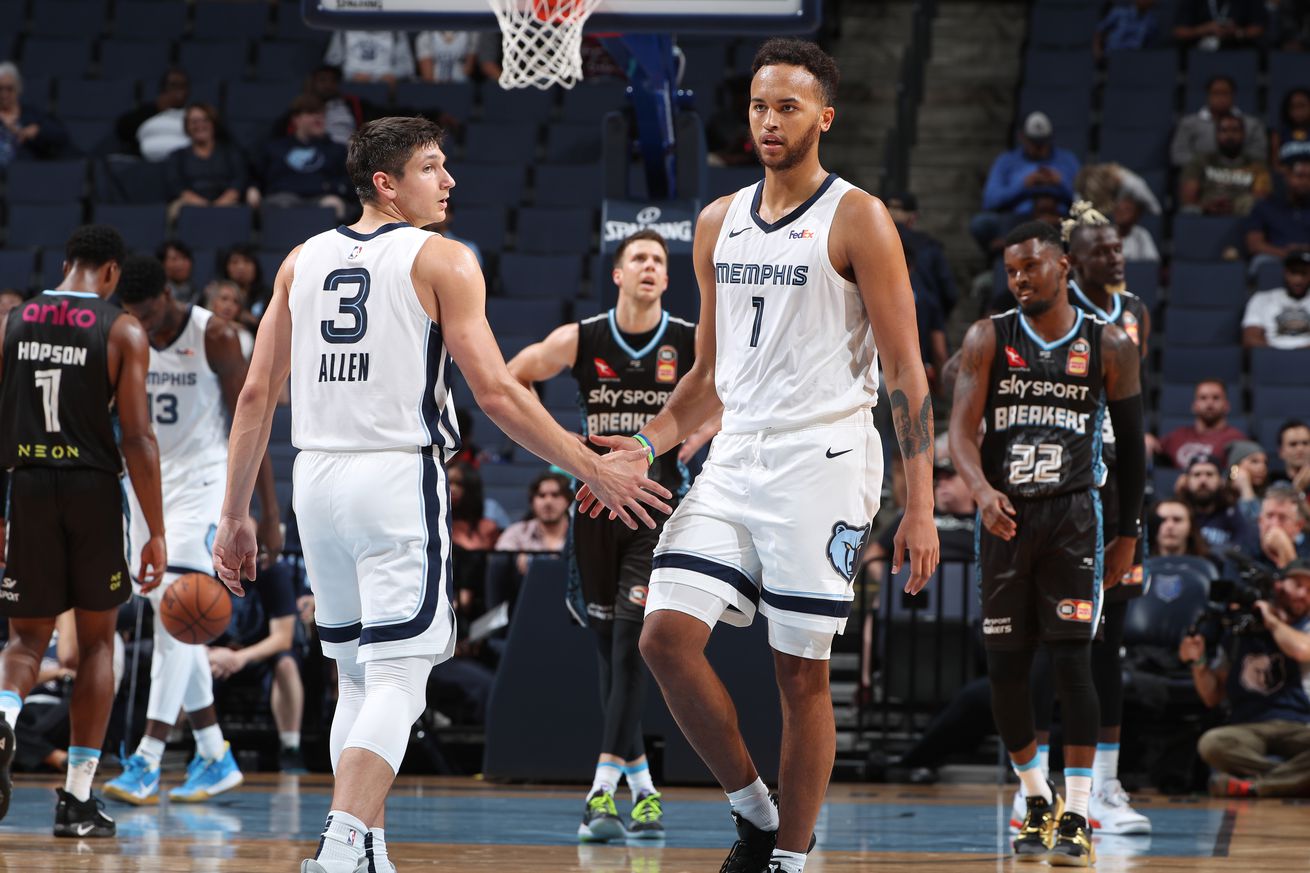 The Silver and Black prepare to meet the most unfamiliar Grizzlies team in years.

Well, the last preseason game of the year is finally (and mercifully) here, and the San Antonio Spurs are no longer seeking that elusive (yet ultimately unquantifiable) first win. Somewhat predictably, it seemed to be the result of Pop expanding the court time of his veteran players, but it’s worth noting that the real-time combination of Russell Westbrook and James Harden looked less dynamic than it might on paper. It’ll certainly be interesting to see if that continues to be the case for the Rockets further into the actual NBA season, but in the meantime San Antonio looks to face the youngest (and potentially most dynamic) Grizzlies team in quite some time.

Gone are the days of “Grit and Grind” in Memphis, with the departures of longtime anchors Marc Gasol and Mike Conley and the arrival of a pair of first round picks in Ja Morant and Brandon Clarke. Years of chronic injuries and coaching changes aside, the Grizzlies were a team that always seemed to rise to the occasion when facing the Silver and Black, often serving as a less-successful mirror-universe version of those early Spurs championship teams, but it’s hard to know just what to expect from these young cubs next season.

Joined by a previous draft steal in Jaren Jackson Jr., Memphis looks to be developing an exciting young core, but this team isn’t all youthful potential with crafty vets like Jae Crowder, Jonas Valanciunas, Miles Plumlee, and former Spur Kyle Anderson (a.k.a “Slow Mo”) aboard. If Morant adapts as quickly to the NBA as his level of talent suggests, and Clarke and Jackson Jr. continue to up their status as draft steals, Memphis could end up becoming a thorn in both San Antonio’s and the rest of the NBA’s side much sooner than later. As such, this game could serve as a sort of mini-preview for titanic clashes to come, some even as soon as this season.


The Elephant in the Room

One of the game’s most interesting questions, bound to effect both Memphis and San Antonio’s upcoming seasons, revolves around the status of onetime NBA Finals MVP Andre Iguodala. At this point, Iggy has yet to officially set foot on court since Game 6 of last year’s championship series, and it’s all but assured that he will be shipped out by this year’s trade deadline (a bedtime prayer repeated by Lakers fans over and over), but if the young Grizz come out swinging and somehow manage to find themselves up in the standings, it might present an interesting conundrum for Iguodala.

With Memphis set to clear as much as (and perhaps more than) $40 million in cap space next season, a potentially disproportionate payday looms. With Iguodala getting long in the tooth, that may become a compelling reason to stay, especially if it’s for a winning team.

For the San Antonio faithful, this matters not only in the scope of extending the misery of fans of the purple and gold, but in the quality of the Grizzlies team that the Spurs will be facing. Iguodala setting up shop in Memphis would allow the Grizzlies to once again adopt a defensive identity while simultaneously bolstering the roster’s biggest weak point at shooting guard (currently manned by special teams kicker Grayson Allen). And while I doubt things will in fact play out that way (or that Iguodola will even take the court tonight), it certainly would be intriguing if it did.

Among the many San Antonio vets out on the court in the victory in Houston, it was actually Lonnie Walker IV who ended up leading the team in minutes played. While his stat line wasn’t particularly eye-popping (5-4-4 in 23 minutes), it was his defensive play that stood out as he racked up two steals and two blocks (both on Harden) while fighting through screen after screen and tying for second on the team in +/- (21). As relatively quiet as his night might have seemed otherwise, it’s an encouraging sign to see Pop giving Lonnie some run, particularly since Pop tends to divvy up court time for his youngsters based on defensive effort and prowess. If the 24-year-long trend holds, Lonnie’s efforts won’t have gone unnoticed, and the critical minutes that so many Spurs fans have been hoping for will finally begin to trickle down.

Lonnie man. Fighting over the screen, recovering and getting another block w out fouling. pic.twitter.com/j3eLnKiHl8

Rudy Gay got last night off against the Rockets, and although Pop said it was nothing serious, he did admit that Gay has been dealing with some lingering hamstring soreness. While his absence opens the door for younger players like Walker and Trey Lyles to get some early run, hopefully this is not something becomes an issue down the line. The Spurs have been snake bitten enough.

Speaking of Lyles, he acquitted himself fairly well in Houston, ending the night with two blocks of his own. It’d be nice to see that level of rim protection carry over to the regular season. If so, San Antonio might find themselves struggling to find adequate court time for all of their bigs, which is nice problem to have in the first place if you can get it.

Chimezie Metu struggled once again. The athleticism is there, but the court awareness continues to be a real struggle, and he found himself out of position on multiple occasions. This is not a great sign for someone who needs to catch up to NBA speed in order to get any sort of playing time, or at the very least, to avoid spending all his time in Austin this season.

This season will be Gregg Popovich’s 24th coaching the San Antonio Spurs, breaking Jerry Sloan’s record of twenty-three with the Utah Jazz. It is now more appropriate than ever to say that no franchise has been as fortunate when it comes to experiencing a consistently high level of coaching as the Spurs. What. A. Run.

It will also be the debut for some nobody named Timothy Duncan as an NBA assistant. I really hope this new guy can hack it.

USA Basketball coach Gregg Popovich on his new Spurs assistant: “Tim Duncan doesn’t know a lick about coaching. I don’t even know why I hired him. He’s given me a paycheck for 19 years so I was kind of obliged to pay him back.” pic.twitter.com/LuveXVynob