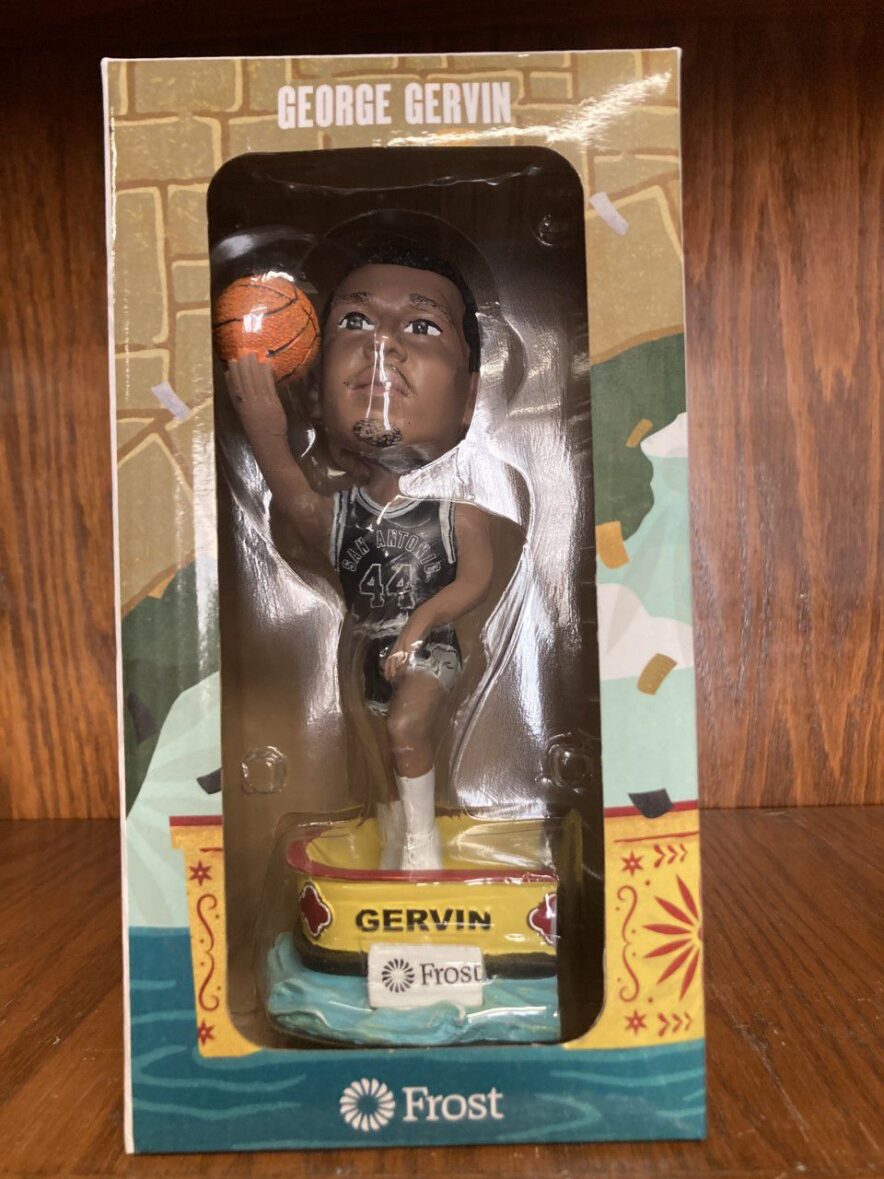 My daughter has developed an affinity for Spurs bobbleheads.

Among her Critters, American Girl Dolls, PAW Patrol, and National Geographic Marble Run, there is a corner of her bookshelf that has been designated a Spurs bobblehead zone. The Coyote, Patty Mills, Dejounte Murray, Keldon Johnson, and Rudy Gay stand proudly.

The newest member of the shelf is George “The Iceman” Gervin.

Gervin’s bobblehead, which was available at the November 7th game against the Denver Nuggets, was the first in a series of five meant to commemorate the 50th anniversary of the San Antonio Spurs.

The five- Gervin, David Robinson, Tim Duncan, Manu Ginobili, and Tony Parker, will unveil throughout the season. They will connect to make a barge, just like the one the players parade on after each NBA Championship.

For us, it is a daddy-daughter date night. We start with the Courtside experience. I must admit, I am huge fan.

First of all, how often does one get this close to the court? That alone makes it unique. But seeing the players warm up, getting into their routines, that is a sight for the true fan.

Also, you get in early. Less time in line (and in the elements) and more time soaking up the atmosphere.

As it pertains to the bobbleheads, there are 10,000 available and the capacity at the AT&T Center is 18,581. Getting in early also secures you that coveted souvenir.

Once the Courtside Experience has ended and the doors finally open for the masses, it is a little easier to maneuver, grab food, shop, or get to your seat with plenty of time to sit back, relax, and prepare to watch your San Antonio Spurs.

David Robinson Bobblehead night is this Friday, December 2nd, when the Spurs host Zion Williamson and the New Orleans Pelicans.

Welcome to the Thread. Join in the conversation or feel free to start your own discussion. This space is for your thoughts on any aspect of the NBA not covered by a dedicated PtR article. This is the Spurs community, your Spurs community. Thanks for being here.