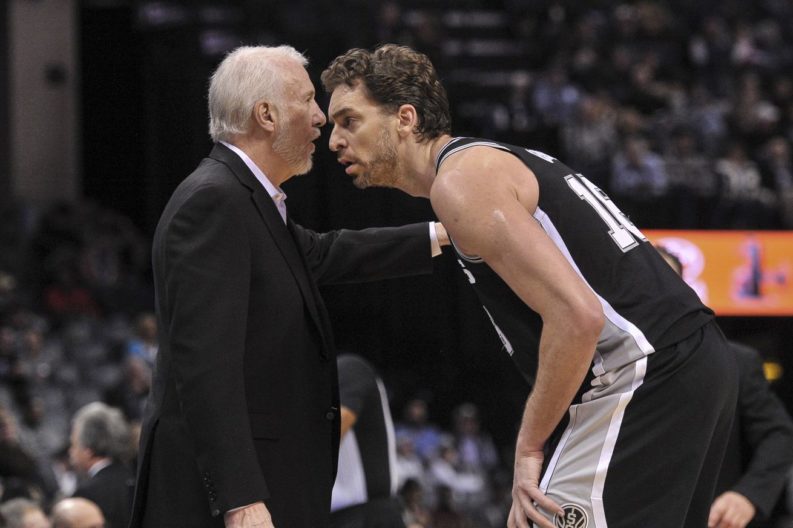 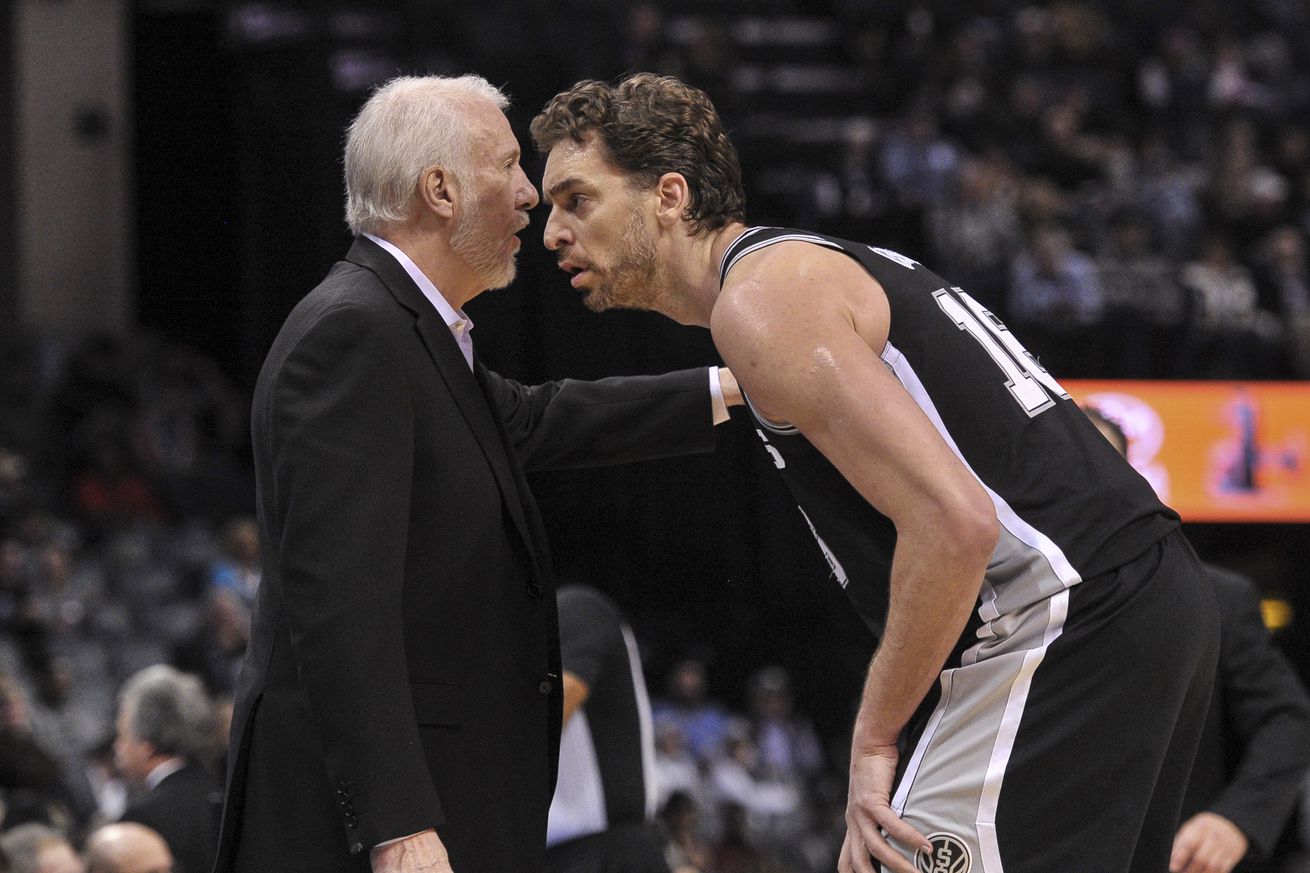 The 37-year-old is not only the team’s most versatile player, he’s essential to much of what happens on both ends of the floor.

As usual, PATFO knew what they were doing all along.

After convincing Pau Gasol to opt out of the second year of his contract so they could temporarily pursue a big fish in free agency, the Spurs proceeded to re-sign the 37-year-old to a controversial three-year, $48 million deal. On PtR, we questioned the decision and lamented the team’s forfeited spending power in the coming years. Bleacher Report called it San Antonio’s worst contract. Heck, here is Zach Lowe a few weeks into the season, still trying to reconcile the Spurs’ decision:

I remember debating the Pau Gasol signing with a Spurs official two summers ago. I was underwhelmed. He was astonished anyone could feel that way about even the creaky, aging version of Gasol. “He knows how to play,” the official said. He kept repeating that. He seemed confused that I didn’t find “knowing how to play” a super-compelling reason to sign someone.

On another team, in another system, with a less-specific design in mind for the aging center, “knowing how to play” may not have been enough and, as a result, Gasol’s value may have waned, his contract morphing into the albatross many dreaded it would be.

That’s not been the case this season. And despite it not going the way the Spurs had hoped health-wise, this season remains a success. You can list a handful of reasons why that’s happened, but many of them lead back to Gasol, who has quite literally been at the center of the Spurs system.

“Knowing how to play” is a fairly open-ended statement, but it speaks to the savviness and versatility Gasol provides. For the 2017-18 Spurs, he’s filled a functional role in shoring up the team’s point-guard play, galvanizing LaMarcus Aldridge’s production, and helping anchor the league’s second-best (and Kawhi-less) defense. Across the board, Gasol has not necessarily been the best Spur on the floor most nights, but you can argue that he’s been their most important.

Revving up the offense

Off-the-dribble shot creation was a known deficiency of this roster going into the season, further exacerbated by injuries to Kawhi Leonard and Tony Parker.

Patty Mills has not developed in that regard, and second-year guard Dejounte Murray is still learning. Tony Parker’s return in December was a boon in that department, but he remains limited in how much he plays and how easily he can break down defenses. And while we’ve looked at the surprising success of the Ginobili-Gasol pick and roll, they’re rare enough that you can’t build an offense around them.

Gregg Popovich was likely aware of this, and has mitigated the issue by having Gasol plant himself at the top of the key and receive the ball early in possessions. A look at his shot chart reflects where he’s spent most of his time when not getting buckets under the basket.

From his perch, Gasol becomes the main axis for his team, capable of hitting cutters or finding LaMarcus Aldridge down low, and there’s no surprise that he leads the Spurs in passes per game (43.5).

Aldridge has carried the Spurs through most of this year, shouldering a significant scoring load while making his usual contributions on the defensive end. His resurgence may not have happened without a complementary piece like Gasol, who has assisted him more times than any other Spur (41 assists; Mills is currently second with 33).

Pau Gasol has assisted LaMarcus Aldridge 30 times this season (tied for the most by any Spur), many of them coming off simple hi-low actions like this one from last night. pic.twitter.com/XHNyg6UGXG

An offense without a veritable pick-and-roll threat can go stale fast, and we’ve seen plenty of examples of that this year. Even the Spurs, with a fleet of three-point shooters and a system built on off-ball movement, need a transcendent skill to crack open a defense, and you can only throw the ball into Aldridge in the post so many times.

Gasol’s combination of floor-spacing (he’s hitting 41.4% of his threes on a career-high 1.9 attempts per game) and passing provide that, allowing Pop to get creative with his playcalling, confident that his center will get the ball where it needs to go, much like a point guard would.

We don’t know what the Spurs call the following set, but since the sideline signal we’ve seen Pop use for it is two fists pointing downward, J.R. Wilco has dubbed it The Defibrillator:

The action begins with Gasol receiving a cross screen in the paint. He flashes up to the top of the key to receive a pass from the ball-handler who, along with another guard, curls around the big man’s shoulder and towards the rim. If the original pass isn’t there, they both cut back out and the play resets.

The number that may best reflect the Spurs-iness Gasol brings to the team? When he goes off the floor, San Antonio’s assist rate drops from 62.8% to 53.4%.

Becoming a true anchor on defense

Gasol wasn’t brought over in 2016 to fill Tim Duncan’s shoes, but the GOATPUFF’s specter was still felt at the beginning of the season. The common denominator often appeared to be the new man in the middle, who found himself struggling to adapt to new rotations and responsibilities, to often comical results.

I don’t believe Gasol has finished a defensive possession sitting in a fan’s seat even once this year. pic.twitter.com/CnrxpuQv6L

From last season to this season, Gasol’s defensive rating has dropped from 104 to 99.2. There are a number of rotational factors at play when it comes to that number, but the mere fact that it’s gone down that much while playing mostly without Kawhi Leonard is certainly meaningful, and it has to do with the way the team has changed its scheme, and how Gasol has adapted himself.

You can learn about the intricacies of the Spurs’ drop pick-and-roll coverage here, but for the purposes of this piece, two things are of primary importance: guards battling through screens to stick with, or recover back to, the ball-handler, and big men dropping back so as to both cover their man and limit shots right around the rim.

Last year, the Spurs were a bit more amenable to switching bigs onto guards. With the more fleet-footed Aldridge, they could occasionally survive those possessions. With Gasol, that wasn’t the case.

Gonna be putting up a piece on Pau’s development as a defender in the Spurs system from last year to next. Please avert your eyes from the next few clips. pic.twitter.com/mtCZud02PE

Those kinds of switches have been far rarer in 2017-18, with more disciplined coverage and guards that are well aware of the man behind them. Gasol is spending more time doing what he does best: being gigantic under the basket.

Last season, he allowed opponents to shoot 55.6% at the rim. This year it’s 47.2% — best in the league — on roughly the same amount of shot attempts (5.4 last year, 5.0 this year). He’s also currently eighth among NBA centers in Defensive Real Plus Minus.

Has he, at 37, transformed his defensive approach from his typical, sky dancer-like way of contesting shots? Not really, but the angles he’s taken, and his footwork while dropping have certainly improved over the past season.

Gasol dropped back on most PnRs last year, but his positioning while back-pedaling has improved significantly pic.twitter.com/HvBluCxpAY

This season, Gasol leads all rim protectors in defensive FG% (47.2) around the basket.https://t.co/wabhZ2P4WT pic.twitter.com/4ibbaGed8Y

Now, schemes like this don’t work without a system that all five players buy into. The necessary rotations need to be made to hedge on Gasol’s man, and the on-ball defender absolutely must fight through his screen (if he’s not going underneath it) and attempt to recover. In that regard, everyone on the team deserves praise, and Gasol’s rim protection stats are more indicative of collective success than anything.

Gasol’s game doesn’t hinge on athleticism so much as on IQ, shooting and passing, which means his contract — which isn’t even guaranteed in year three — should age just fine. Only two players in NBA history have averaged at least 10, 8, and 3 in their year-37 season and beyond: Karl Malone (who did it three times), and Pau Gasol this season. Even if his production slips in year two, the Spurs are getting more value out of his deal than anticipated. This season he’s absolutely been worth his contract. Considering how injured the team has been, Gasol might even be a bargain.