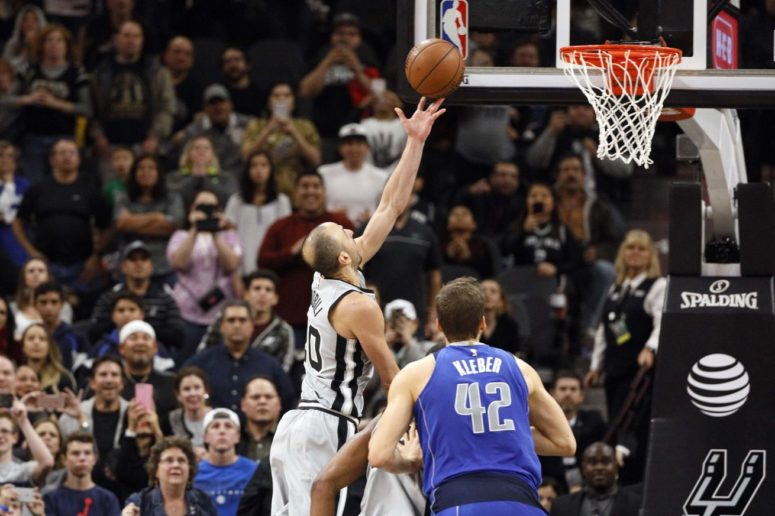 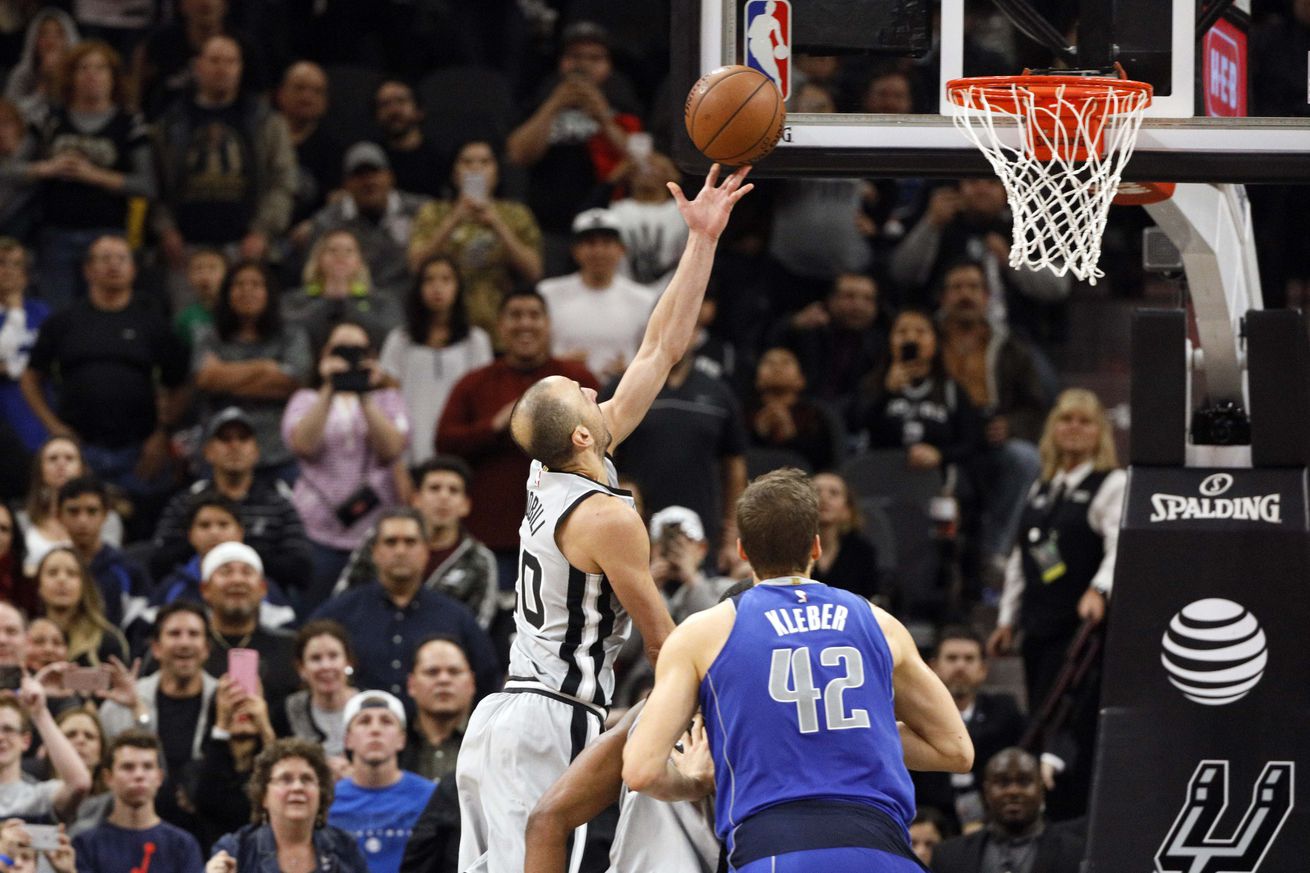 Manu buries another game-winner, Patty gets tripped walking off court, and Bryn Forbes gets the call late in the game.

All questions are posed at the start of the weekend and posted on Tuesday. For questions about games involving the Clippers, Trailblazers, and Jazz check back next week.

Kawhi’s back. What did you think of his performance in his first games?

Marilyn Dubinski: Individually, Kawhi has looked pretty good. He’s obviously not in game shape yet, looks pretty slow and is missing some defensive rotations, but his shot certainly never left him, which is probably what surprises me the most. Very few players can come back from a seven-month hiatus without losing their shooting stroke, but Kawhi has.

Bruno Passos: After only seeing him against the Mavs and Rockets, I’d say his performance is more or less where I’d expect it after missing seven months of NBA action. There have been a few glitches here and there, and his movements aren’t as fluid as we’re used to, but even at X% he’s probably already the team’s best shot creator. The Spurs aren’t doing anything fancy with him off the ball — 90.9% of his baskets have been unassisted — and I’d expect them to maintain a simple, wait-and-see approach in the short term, rather than ask him to do too much.

Jesus Gomez: I think he’s looked like a guy who’s missed a lot of time and is clearly not in game shape. He’s still going to make plays on both ends, because he naturally anticipates opponent’s moves on defense and worked hard to develop his shot and his footwork. But it might take a while before he gets his burst back and we see the real Kawhi on a consistent basis. That’s perfectly fine. As long as there are no setbacks, I’m fine with being patient.

Mark Barrington: He’s been about as good as expected. He looks physically OK but rusty as hell, and he’s not yet playing at full speed as he regains confidence in his body. The lack of practice time with the team shows, and he’s not getting involved in the offensive flow, just putting up shots when he’s open. His defense seems to be pretty good. He probably won’t be in full effect until after the All Star Break.

J. R. Wilco: Leonard looks fine, but I am amazed by how little Kawhi the Spurs are prepared to go with. They’re like a man crossing a desert and allowing himself two capfulls of water from his canteen every however often. Until he plays regularly he’s not going to look like last year’s Kawhi. We’d better get used to it.

The Spurs filled an 11-point hole in the last 4:11 against the Mavericks on Saturday night and the finishing touches were all Manu Ginobili. What is most impressive about #20 this season?

Dubinski: It’s easy to be impressed by Manu’s prowess in the clutch, even at 40-years-old, but he’s always been that way. I’m probably most impressed that he’s still doing all this despite an increase in minutes for the first time since 2010-2011, when he jumped from 28.3 to 30.7 minutes as a starter in his last All-Star campaign. Sure, he’s only playing 20.8 minutes now, but it’s still impressive nonetheless.

Passos: His shooting at the rim! That’s one of the areas that typically regresses the most over time since guys lose their lift and the ability to finish through and around rim protectors. Last year, he shot an abysmal 45% at the basket. This year? 57%.

Just like with his game-winning shot versus Dallas, Manu’s shown an improved sense of when and how to attack the rim, and what to do with the ball when his window closes.

Gomez: The most impressing thing is that he’s still playing, honestly. Beyond that, his adjustment on the pick and roll has been amazing. Last season, he was almost always looking to pass out of it and opponents knew it. He turned the ball over a lot and even when he didn’t, he didn’t create good shots for himself. This season he’s still turning it over a lot, but he’s being a lot more aggressive looking for his shot. As a result he’s scoring 0.13 more points per possession in that setting, according to Synergy Sports. That doesn’t seem like much but it adds up. Even at age 40, Manu still found a way to adjust his game to help the team.

Barrington: I did not see the game on Saturday, but nothing Manu does on the court surprises me. He’ll still be beating young punks off the dribble when he’s 60.

Wilco: What’s most impressive is the way his diminished physical tools don’t seem to be an impediment to his late-game heroics. It’s one thing to regularly drop in some buckets during the course of a game. It’s another to score the last points of a tight game when everyone is on full alert and trying their absolute best. Manu might be the most clutch 40-year-old in the history of the league.

Despite shooting 0-5 from beyond the arc last Saturday against the Phoenix Suns, Pop designed a play that put the ball in Bryn Forbes’ hands with less than a minute to play. What does that say about Forbes right now?

Dubinski: It says that Bryn has Pop’s complete trust, and by extention that likely means his contract will become guaranteed on January 10. He continues to fly under the radar for most of the league and even Spurs fans, but if he can keep his minutes and current numbers up for the rest of the season, he should be in the argument for Most Improved Player (although he’ll have some competition on his own team if Kyle Anderson can maintain a role once he returns).

Passos: Forbes is never afraid to shoot the ball, and the Spurs know it. I’ve got no qualms with him being on the floor in crunch-time offensive possessions at this point.

Gomez: It says Pop trusts him, which is always a good thing. It’s also not that surprising. Pop likes shooters who aren’t afraid to pull the trigger. Michael Finley used to get looks in crunch time. So did Roger Mason and Gary Neal. As long as Forbes is getting minutes at the end of games, he has to be willing to let it fly. After Pop told him he’d bench him if he didn’t shoot, it seems like he’s ready to do that.

Wilco: It says that Pop is pleased enough with his defense that he will play him in late-game situations, which is something I didn’t expect to be the case next year, much less this. It might also mean that Pop meant all of the Curry comparisons.

Salah Mejri was seen attempting to trip Patty Mills after Wednesday night’s game. How should the league have handled this incident?

Dubinski: I was personally surprised that the league’s response was pretty much “this is nothing, moving on”, even after Mejri basically admitted it was intentional. I get that nothing came of it, and Patty may not have even realized what he tripped over at the time, but I thought they’d at least release their usual “we have talked to this individual about his behavior, and any similar actions in the future will result in further discipline” statement. That alone would have satisfied me, but for league that prides itself in preventing brawls and is even reviewing the corniest of fouls for flagrants now, shrugging off of this incident by a well-known instigator is semi-surprising.

Passos: The Mavs’ latest enforcer is putting together a nice resume of chippy plays, and the league should be taking notice. One or two get the benefit of the doubt, but when a player is consistently losing his cool and seeking out confrontation, a fine is probably in order.

Gomez: A suspension would have been too much, but a fine might have been appropriate. It was not particularly violent, but it was clearly intentional and intended to incite a response. The fact that it didn’t shouldn’t absolve Mejri. It reminded me of Dahntay Jones bumping Draymond Green on purpose after a game. Green didn’t react, but the league still fined Jones. Some might say that happened because Jones had a reputation, but Mejri should have one by now. He plays with a ton of energy, which is commendable, but at times crosses the line. He makes dangerous plays and talks too much. The league’s office should play closer attention to him.

Barrington: Not that the league would ever do this, but they should have suspended him for a game. This kind of crap isn’t just annoying, it really detracts from the game, and it’s going to get someone hurt eventually.

Wilco: The league missed the boat on the discipline side, but they hit the jackpot on the scheduling. San Antonio doesn’t play Dallas again until next season, which means by the next time the teams meet he might not even be a Brony anymore.

How long will it take the Spurs to get comfortable with Kawhi Leonard?

Dubinski: Until he starts playing regular minutes. As long as Kawhi is just out there to get in shape in the first half while the rest of Spurs know they’ll have to completely change approaches in the second, it’s going to be awkward for everyone involved. Hopefully that takes less than ten games, because even though there will still be some adjustments to make then, it can only really start happening once Pop has a set rotation.

Passos: It depends on how long it takes Kawhi to get comfortable, really. On Saturday, Pop said neither he nor Tony were playing back-to-backs yet, so that’ll be something to keep an eye on.

Gomez: It’s hard to say. Had Kawhi returned at full strength, it probably would have been easier. Now that he’s on a minutes restriction and not looking fully like his elite self, it might take a while longer. As long as it happens before the playoffs, though, the Spurs should be fine.

Barrington: As I said in the answer to question 1, after the All Star Break.

Wilco: I’m setting my clock by Mark, so I don’t get upset if things take longer than I wish they would.

If you have a question for In The Bonus, add it to the comments below or email Jeph Duarte.