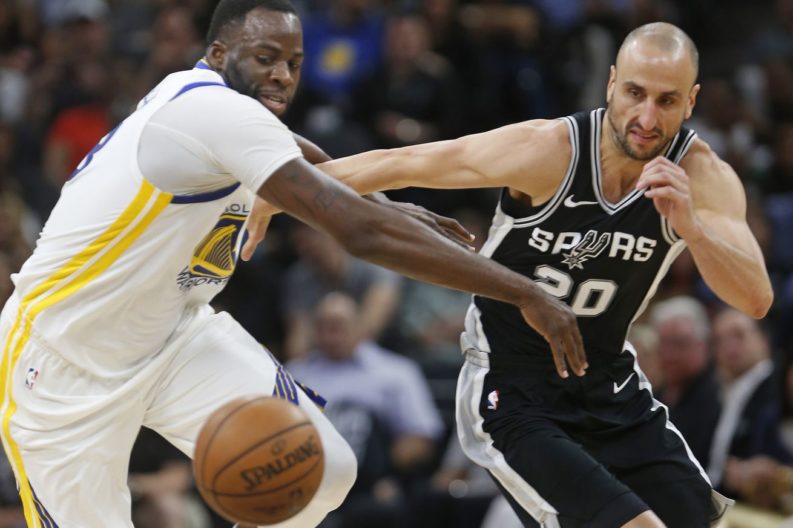 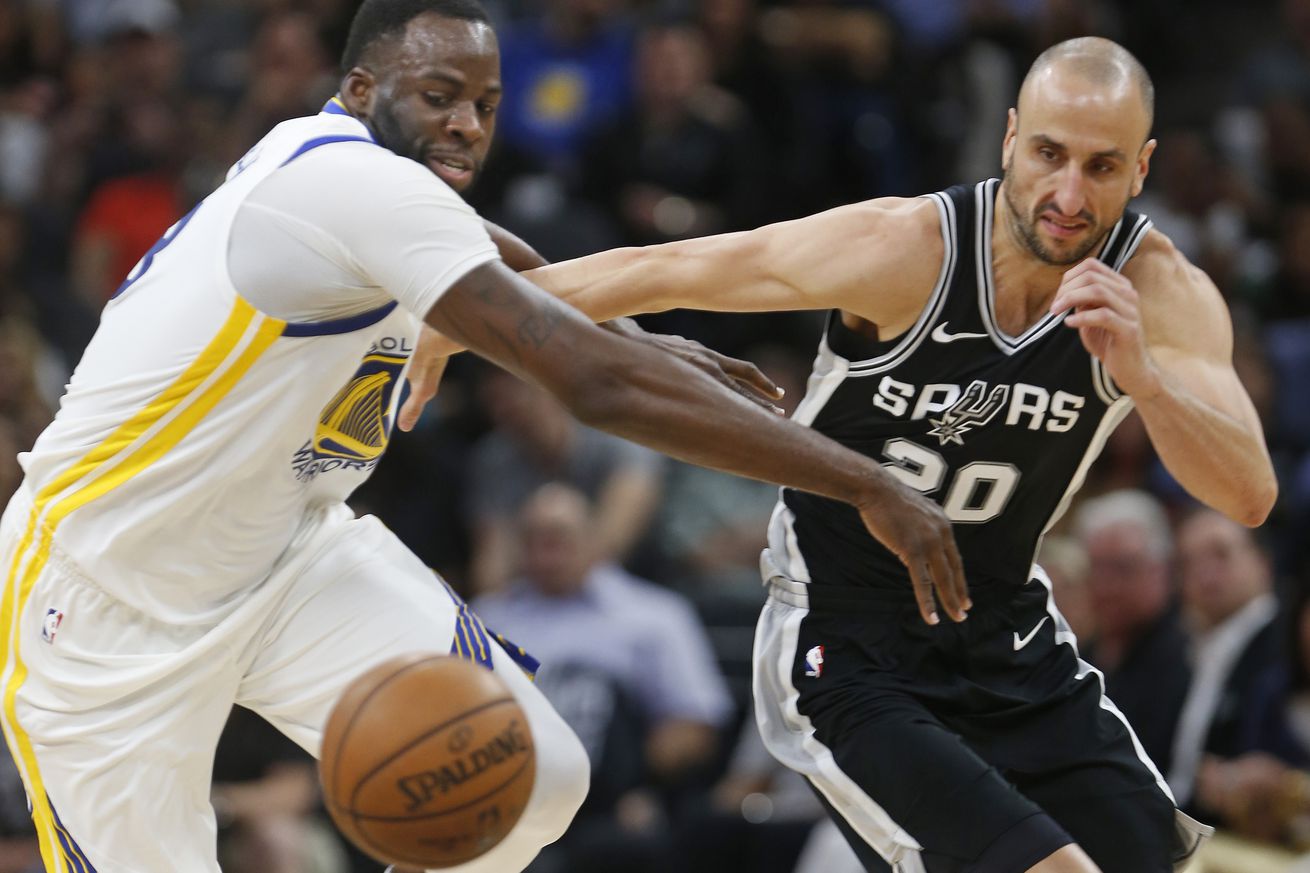 Here are three Spurs-inspired skills for aging ballers to learn for fun and profit.

One of the best things about the NBA basketball season is the way it inspires non-professional athletes to dust off their shoes and actually play the game themselves. Not every basketball fan is a player or coach at heart, but as the season dawns I know Spurs fans will be hitting the courts themselves in greater numbers. Whether it’s shooting a couple hoops with the grand-kids, dropping in on a weekly pick-up game, or coaching a youth team, there’s nothing quite like the social and physical aspects of being directly involved in a game of basketball.

In fact, when I get a chance to watch Spurs games or highlights, I’m always thinking about how I can implement what I’m seeing into my own game. I watch the players not as stars, but as fellow-craftsmen. Of course, I’ll never be paid a dime to play the game, but the mindset is still there.

In that spirit, here are three of the simplest, most effective, and over-30-appropriate techniques I have pulled into my own individual game over the last 5 years of watching Spurs basketball. Each move comes with a GIF or two and an in-depth “how to gain this skill” explanation.

The Boris Diaw Zig Zag Back Down

Boris Diaw is a study for any aging, out of shape basketball junky. He used so many energy efficient moves that are suited for situations when you have a weight and basketball IQ advantage and your opponent has an advantage in everything else. For example, if you watch a lot of Diaw post-ups, you will notice he often uses a zig zag approach that combines very short angled drives. When I first started testing this approach to post up isolations from the perimeter, I was amazed at how much simpler and more effective it was than the traditional post moves I had been taught (or even the Shaq like bump, bump, offensive foul, baby hook/dunk strategy). Rather than sitting there banging my way into the post for 10 seconds, the Diaw Zig Zag gets there quickly and easily in a few dribbles. Combined with a hook or turnaround of some kind, it’s become my go-to for the second half of games against quicker, taller, and better conditioned opponents who otherwise would have me outmatched and out of breath.

The key to the Diaw backdown is to make the direction changes more like very short, random drives that the opponent has to cut off and less like a formulaic post back down.

Step 2: Take one or two quick dribbles as if driving in the direction of your lead shoulder

Step 3: Reverse pivot 210 degrees or so while keeping the ball shielded and switching dribbling hand/lead shoulder.

Step 4: Repeat step 2. Add head and shoulder fakes as needed. The point is that the ball moves minimally.

Key: You must continually keep tabs on where your defender is, so you can take advantage of any mistake — overplaying you baseline while leaving the lane open, etc. Reading the player guarding you is essential to this move, and you’ll only have minimal success with it until you’re able to know at all times how you’re being defended.

Bonus: Master a completely no-look shot to use near the end of the backdown. To do it reliably, practice looking down at a particular spot on the floor (e.g. the low block) and being able to flip it up unexpectedly directly over your head when you sight it. The defender’s arms will almost always be down (or at least waiting over one shoulder for your turn) when defending the zig zag, so the shot is difficult to block unless they are 6-8 inches taller than you at least.

I remember first trying this move as a fun gimmick after seeing Cory Joseph do it in a game in 2015. I was surprised at how effective it was. It worked especially well against overeager high school ball players who wanted to block every shot. It’s always good for one easy basket a game, and it works best if it follows a strong weak-hand drive.

Step 1: Drive hard to your weak hand (for me that’s my left hand)

Step 2: As you step down on your weak-side foot, pick-up the ball, just as you would for a left-handed layup, but to save your knee start braking rather than accelerating.

Step 4: Keep the ball going (“show it”) as if it was on its way up to the backboard. Have your strong hand cradle around the front of the ball to slow it’s progress (unless you’re Manu Ginobili . . . then you can use whatever hand you feel like). If you have smaller hands, you’ll probably use your wrist too.

Step 5: Let the defender’s momentum carry him past while you spin back toward the center for a little half-hook, push, or jump shot.

Bonus: Develop some dead ball moves out of this and you can use it after the surprise effect has worn off. For example, it sets up a nice up and under layup with the weak hand if the defender sticks with the first fake and recovers to your strong shoulder. Similarly, a spin back baseline again can be an effective counter.

The straightaway three is the single most important shot in pick-up basketball, particularly for the non-mathematically inclined who persist in playing by 1s and 2s, thereby vastly overvaluing shots behind the arc. If you have decent shot mechanics, it doesn’t take long to master the straightaway three, and Pau Gasol’s motion and footwork is ideal for visualization; he seems to have a nice step in straightaway 3 at least once a game whenever I watch. It’s very effective when playing winner’s outs following a successful drive and score. The defender tends to back off just a bit to protect the drive, and if you can catch it in rhythm right after seeing the ball go through the net, it makes the shot much easier. It also produces a high percentage of offensive rebounds because the defender has to turn an entire 180 degrees to box out and the ball tends to bounce back to you more often. It can’t go off long to the weak side like it most often does on an average wing or corner look. If you tend to miss left or right, it’s also much easier to feel which side you missed it off and see that before your defender can.

Step 1: Practice your straightaway 3s from a bit beyond the top of the arc. Those extra feet are helpful in getting space, and they don’t substantially increase the degree of difficulty on straightaway 3s provided you have the strength to do it without altering your mechanics.

Step 2: If you’re thinking about pulling the trigger on a straightaway 3 in 1 on 1, casually set up to receive the checked ball a few feet outside the top of the circle. If you’re playing full court 5 on 5, look for them when you are the last guy up the court.

Step 3: If you’re a right handed shooter like Pau, plant your left foot as you catch the ball and let your right foot swing through to your preferred shooting stance. As you do that, get the ball in your shooting pocket and start your shooting motion. Pau often has his feet fully set, but if you are pulling your foot through, it sets you up better to drive on a closeout.

Step 5: If you’re in shape or a bad shooter, pick one side to sprint around your defender and get a body between him and the basket around the free throw line to pick up the offensive rebound for a layup.

Bonus: For the next level, implement an exaggerated Ginobili shot fake and drive to counter when the defender closes out hard.