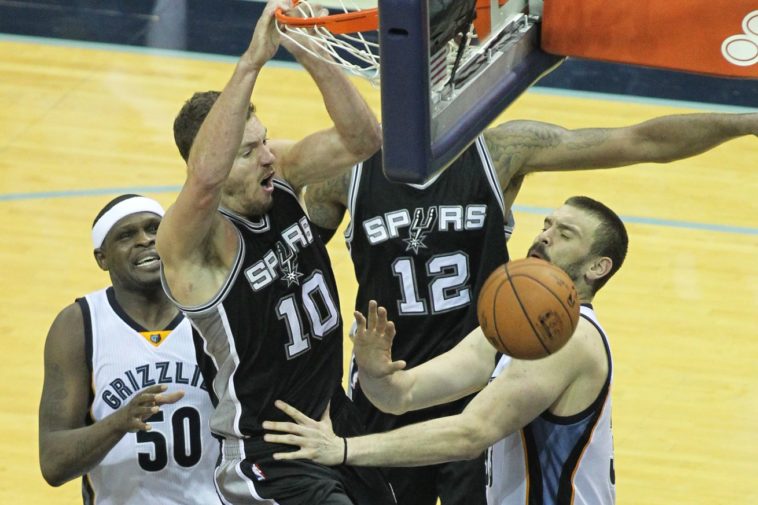 Memphis put up a fight, but this is how the Spurs prevailed.

The Spurs closed out a grueling series against the predictably dogged Grizzlies on Thursday night in Memphis. Advanced metrics aside for a second, you can’t tell the story of this thrilling Game 6 victory without pointing to the spectacular play of both Kawhi Leonard and Tony Parker:

During that duo’s 26 minutes playing together, the Spurs outscored the Grizzlies by 33.8 points per 100 possessions. Despite their coupled dominance, though, the game was tied 92-92 with 2:48 left to play. That’s when Kawhi showed why he’s the best two-way player in the league with both his playmaking ability and defense. First, Leonard drove the lane and forced help from Marc Gasol, hitting David Lee for a strong two-handed finish.

On the other end Leonard came up with a steal off a bad entry pass from James Ennis. Then, he facilitated the offense again, forced the defense to collapse and kicked it out to a red hot Parker. Leonard was so effective as a facilitator down the stretch that three of his four assists came in the final 2:25 to play, with Parker as the beneficiary each time. The Spurs offense was dominant in the clutch (defined by NBA.com as within the final five minutes while the score is within five points). During those final five minutes, the Spurs had an offensive rating of 190.4, scoring 15 points on 6-9 from the field and 2-2 from the line.

And the other thing I’m sure you noticed? Offensive rebounding. The Spurs rebounded an obscene 43.2% of their misses, compared to just 18.9% for Memphis. For context, the Oklahoma City Thunder led the league this regular season in offensive rebounding percentage at 27.9%. LaMarcus Aldridge (5 ORebs), Lee (ORebs) and Leonard (3 ORebs) were active on the glass all night and the Grizzlies had no answers. The Spurs 16 ORebs led to 17 second chance points, which, compared to the Grizzlies’ nine, proved to be a deciding factor in the game.

Whenever the Spurs’ offense seemed like it might stagnate, they’d get an offense rebound and another opportunity. Take this isolation post-up for Aldridge, down three points with four minutes to go. When LA beats Zach Randolph off the dribble, it forces Marc Gasol to help, leaving Mike Conley out of position and helpless against Lee on the glass.

As important as second chance points were in this one, you could just as easily point to the Grizzlies’ +9 margin in fast break points and wonder why that wasn’t the difference in the game. The answer is, we can talk about numbers all we want, but this game came down to execution and simply making shots in the half court. Per Inpredictable.com, the Spurs scored a sizzling 1.32 points per possession following a Grizzlies made shot. During the regular season, the Spurs scored just 1.08 points per possession following a make (which was still a top-five league mark). The Spurs showed they are a team who has been there before, and calmly knocked down shots at the biggest moments.

I’m sure future Study Hall articles will have more insight for you in the Rockets series than “you have to make your shots.” But, for now, you can take that for dat– never mind, too easy.