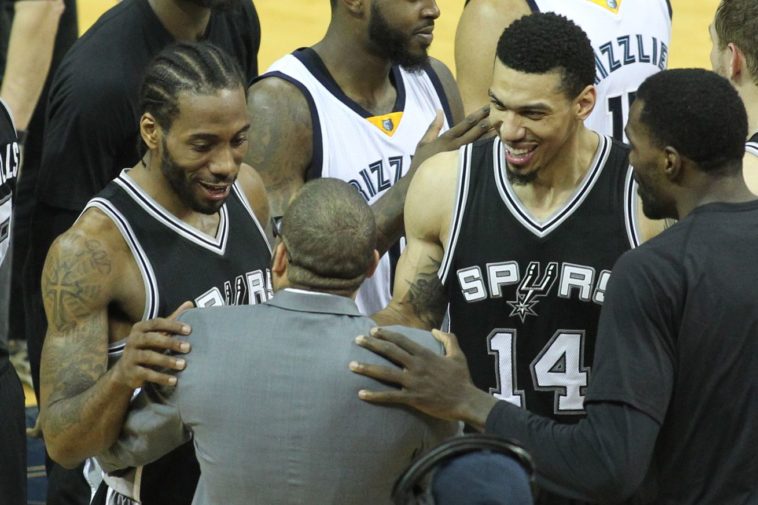 My goodness. What a basketball series.

For a matchup featuring two small-market teams and Kawhi Leonard, Mike Conley and Marc Gasol as its headliners, the San Antonio Spurs’ six-game series win over the Memphis Grizzlies may have been the most compelling first-round series of them all.

Game 4 is already an instant playoff classic, a basketball game that evolved into a basketball masterclass in the fourth quarter between Kawhi and Conley, the two quietest stars in the league exchanging haymakers until one of them hit the mat.

Game 5 had all the makings of another close contest until the San Antonio started Spurs-ing all over the place in the final five minutes to secure a comfy 13-point win.

Which meant that Game 6 shifted the pressure to Memphis; with the looming possibility of the season ending, and the axe-wielding Spurs vying for the kill, Memphis wasn’t fazed much. They just did what the Grizzlies do and made the Spurs work for every single thing they got.

The 103-96 Spurs victory featured a Grizzlies team on the brink of elimination. Memphis fired away from distance and connected. Conley cooked whoever guarded him into a tasty souffle each possession. (David Lee was one of Conley’s repeat victims, the Spur most often on the wrong end of pick-and-rolls. May he rest in peace and his spirit be restored in time for the next series.)

It seemed that maybe, just maybe, Memphis had another game left in its tank, that maybe they’d force a seventh game in the series.

Then Kawhi — this time with some help! — closed the books on the festivities before the party really could get going. He accounted for 16 of the Spurs’ final 24 points (10 points scoring, six points created via assists) all part of a 24-15 run as soon as he stepped on the floor. San Antonio weathered the non-Kawhi storm, and trailed by just two points when he checked into the game with 8:18 left in the fourth quarter. In a series defined by thin margins, keeping the deficit close without Kawhi, the lifeblood of the Spurs offense, was all-important.

Tony Parker made a pair of timely buckets, sending Memphis home with their new iconic catchphrases and another first-round exit to show for its 2016-17 season. (Side note: Memphis played a fantastic series. They have an awesome team, albeit with a limited playoff ceiling, and an engaged fan base that loves them. Please don’t break up this team.)

San Antonio’s point differential (50 points) doesn’t do this series any justice. Memphis battled and exposed the Spurs’ flaws (non-Kawhi players trying to score points, guard play, stopping a legitimate big man, a deep regular season rotation that needs to be re-jiggered for the playoffs) to the point where a first-round upset was conceivable. The Spurs never had an answer for Conley or Gasol. Randolph struggled in Game 6, but his addition to the starting lineup in Game 3 altered the trajectory of the series. Memphis was without its two starting wings for the series and nearly forced a series-deciding game in San Antonio with the likes of 40-year-old Vince Carter, James Ennis, Wayne Selden and Troy Daniels earning spot minutes.

True to form, the Spurs didn’t advance to the second-round without serious resistance.

A much-anticipated second-round series against the Houston Rockets awaits, but we shouldn’t forget Memphis’ efforts in chipping the Spurs’ facade.

In the first round, Playoff Tony Parker was a lot better than Regular Season Tony Parker. Washed up 34-year-old Parker averaged 16.3 points, 3.0 assists, 2.2 rebounds, 1.3 3-pointers, 53.3 FG%, 53.3 3FG% and 100.0 FT% for the series, providing Kawhi with enough offensive oomph to get past the Grizzlies. He was everything — and more — the Spurs needed to avoid a Game 7 in the first-round.

Also shoutout to Kawhi for putting up *just* 29 points, 9 rebounds, 4 assists and 3 steals in a playoff-clinching victory on the road. He doesn’t get the game ball here, because this is about what we expect from our cornrow’d assassin each night. Plus, Kawhi’s 29-point Game 6 actually lowered his scoring average in the series from 31.6 to 31.2. He added 6.0 rebounds, 3.8 assists, 2.3 3-pointers and 2.0 steals per game while shooting 54.8 percent from the field, 48.3 percent from 3-point range and 96.7 percent from the free throw line in the series.

“Obviously Kawhi Leonard is, in my opinion, the best player in the league right now. He’s the best two-way player and does it all with such class. It’s impressive.”

The Spurs are LORDS of “prevent a Game 7 by breaking every soul in the building” closeouts.

Vintage TONY PARKER, I Love It

I like Houston, it’s easily in my top 38 of Texas cities. Right below Del Rio.

*Disclaimer: This section is not sponsored by Taco Bell. I’m just a huge fan. Direct any negativity towards Taco Bell at me in the comments below. It’s cool. I don’t mind.

Last night’s series finale earns the exclusive Naked Chicken Chalupa distinction, because at first you’re all like “there is no way this ends well — a taco shell should not be made of chicken” then three bites in you’re all like “this is amazing and everything I needed in my life.”

That was the Spurs-Grizzlies experience to a tee — regret, worry and, then, jubilation.