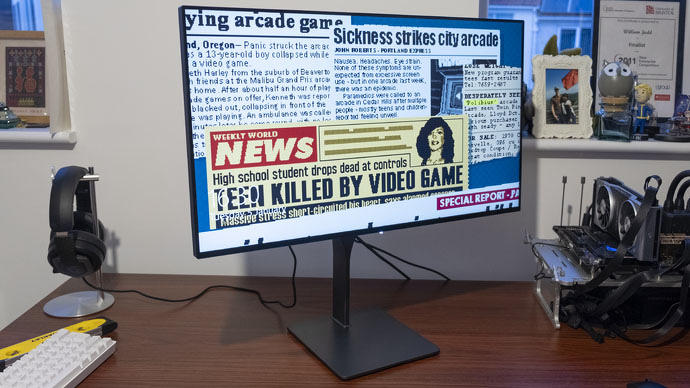 15 months after we first covered the crowd-designed Eve Spectrum gaming monitor, the first pre-production samples have begun shipping out. This is our first opportunity to see how the Spectrum, once touted as the first HDMI 2.1 monitor to arrive on the market, actually looks in the flesh and performs in-game.

Our sample is the $689 4K 144Hz version, the ‘flagship’ of a lineup that also includes more affordable 1440p 165Hz ($439) and 1440p 240Hz ($589) options, all based around 27-inch IPS panels. Eve also shipped us a stand, which is sold separately for $99 – in response to the large percentage of Eve community members that said they’d be using the monitor’s 100×100 VESA mount with their own monitor arms. That brings the retail price to $788 in total. The sum’s not unreasonable, when the similarly specced LG 27GN950 is $800 with fewer features, but it is worth factoring in when comparing this monitor against its competitors which invariably do come with stands (unless they’re made by Apple).

We were warned out of the gate that the Spectrum we received would be some distance from the final retail version, and that’s definitely the case – our unit’s HDMI 2.1 functionality doesn’t work at all (based on testing with a PS5, Xbox Series X and an RTX 3080 PC) and even on DisplayPort we were limited to 4K 144Hz with chroma subsampling (specifically, the monitor is currently outputting only 4:2:2 rather than full 4:4:4). According to Eve CEO Konstantinos Karatsevidis, apparently the Spectrum displays were working fine at full RGB using DisplayPort on RTX 30-series graphics cards like the 3080 and 3090, but the Spectrum exhibited artifacting with other GPUs, hence the chroma subsampling stopgap. With regards to the HDMI 2.1, apparently the hardware is fully capable but the certification process is still underway. Given how central HDMI 2.1 has been in Eve’s marketing, we’d expect these features to be working properly for launch.

The current OSD (on-screen display) is a mess too: plenty of settings, sure, but what’s here is often poorly labelled, unstyled and of unclear effectiveness. Many entries don’t appear to do anything at all right now, but there are some exciting options if they work in the final project – such as user-defined overdrive and motion blur reduction settings, customisable indicator LED colours/effects and picture-in-picture modes.

One of the big highlights is supposed to be pixel-perfect scaling, although GPU makers like Intel and Nvidia have since added this to their software and the feature didn’t seem to reduce blurriness when I tested it with games like FTL. I also set a desktop resolution of 1280×800 for a manual test, as this should be doubled to 2560×1600 while leaving black bars on all four sides – but this didn’t happen, suggesting the feature isn’t working as intended just yet. This firmware version is apparently from October last year, and Eve’s CEO insists that their current iteration is much more functional.

What is more final is the hardware side of the equation, and here Eve seem to have done a fine job – perhaps as the firm does have some experience with industrial design, courtesy of their contentious Eve V two-in-one. The $99 stand is every bit as graceful as it appears in the concept photos, with a thin but deep neck that provides excellent stability to the display above. There’s no swivel, as you’ll soon discover when you go to plug in your cables of choice, but tilt, 90 degree rotation and height adjustment all work smoothly. The base of the stand is flat and has a minimal footprint, so you can easily rest a keyboard on top of it if you like to keep your screen close to your face.

The monitor itself is also streamlined and good looking, with tiny bezels on three sides and only a slightly thicker frame at the bottom of the screen. Look at the back, and you’ll see subtle ventilation holes at the top, 3.5mm, USB-C and two full-size USB ports on the left side and DisplayPort, 2x HDMI 2.1, USB-C and power inputs on the bottom. One of these USB-C ports should support 100W charging in the final retail unit, although this is another feature that isn’t working in our pre-production sample. Similarly, the joystick on the back of the monitor is a little spongey, and it was sometimes difficult to navigate around the OSD – although this also could have been down to the early software rather than a hardware failing.

So, what does work? I tested the monitor in a range of games and used it for work for a one-week period after the New Year break, and despite the limitations I was impressed.

For gaming, the display proved adequate for competitive titles like Counter-Strike and Valorant, with rapid pixel response times courtesy of the ‘Fast IPS’ screen used here – which could even be the same LG panel we loved in our current 4K 144Hz monitor recommendation, the LG 27GN950. The different overdrive settings didn’t seem to make much difference, though Eve has said they’re non-final and hopefully should work as intended on the retail units. (Display experts Blurbusters are reportedly providing feedback on the panel, which is a good sign.) The rainslick and neon-lit streets of Cyberpunk 2077 looked great too, especially with Alex Battaglia’s optimised RTX settings. Of course, you’ll need a strong CPU and GPU combo to hit high frame-rates at 4K, so it’s best to think as this particular Spectrum variant as being flexible – 4K for the web, work and more cinematic games, 144Hz for fast and twitchy games – rather than expecting you’ll be able to hit 4K and 144Hz simultaneously in the most punishing AAA titles. The Spectrum should be FreeSync and G-Sync Compatible in its final form, but at the moment we saw no option to enable VRR on our RTX 2080 Super test rig.

The Spectrum’s screen can also get bright enough (around 650 nits) to make HDR worthwhile and colour accuracy is on point too; certainly the quoted 98 per cent DCI P3 and 100 per cent sRGB gamut coverage should be well-suited for prosumer colour-sensitive work like photo or video editing. Wide viewing angles also mean that colour and brightness don’t change drastically if you observe the monitor from above, below or to the side – great if you’re watching a movie with friends or a colleague is looking at your screen while standing. (Remember colleagues? Ah, the good times.) The viewing angles also make it a good choice for co-op games like Overcooked 2, where you’re unlikely to both be sitting directly in front of the monitor.

Given that this is an early sample we didn’t break out the full testing kit, but our early impressions are broadly positive, speaking perhaps to the quality of the panel Eve has chosen rather than their tuning of the display. Beyond this, a few small bugbears did crop up during our testing, including:

None of these issues are entirely unexpected on a pre-production model, but there’s still enough here to suggest that Eve and their partners have a lot of work ahead of them to get everything perfect for launch – and a recent blog post suggests they at least understand the scale of the challenge. Even with the Spectrum having already been delayed from Q2 2020 to Q4 2020, and then again to February 2021, it’s hard to imagine that the monitor will be performing flawlessly by next month. Even with the confounding factors of COVID and a team making their first monitor, that may be a bitter pill to swallow for pre-order customers – especially those that have read the comments from unhappy backers of the earlier Eve V convertible, which tend to pop up on any mention of the company online.

So far then, things haven’t really changed from that original Spectrum pitch: it’s a very good-looking monitor with an ambitious feature list… but the Eve team hasn’t yet shown that it’s able to deliver everything that it promised. Having an actual unit in hand gives me some confidence that the basics of the monitor will be taken care of and their choice of panel is a solid one, but whether that translates into a monitor that’s able to outperform alternatives from major vendors like LG and Samsung is another story entirely. Eve still has everything to prove.

Got any questions? We still have our Spectrum sample for a day or two, so please if there’s something you want tested or something specific you want answered then do let us know in the comments or via Twitter (@wsjudd).