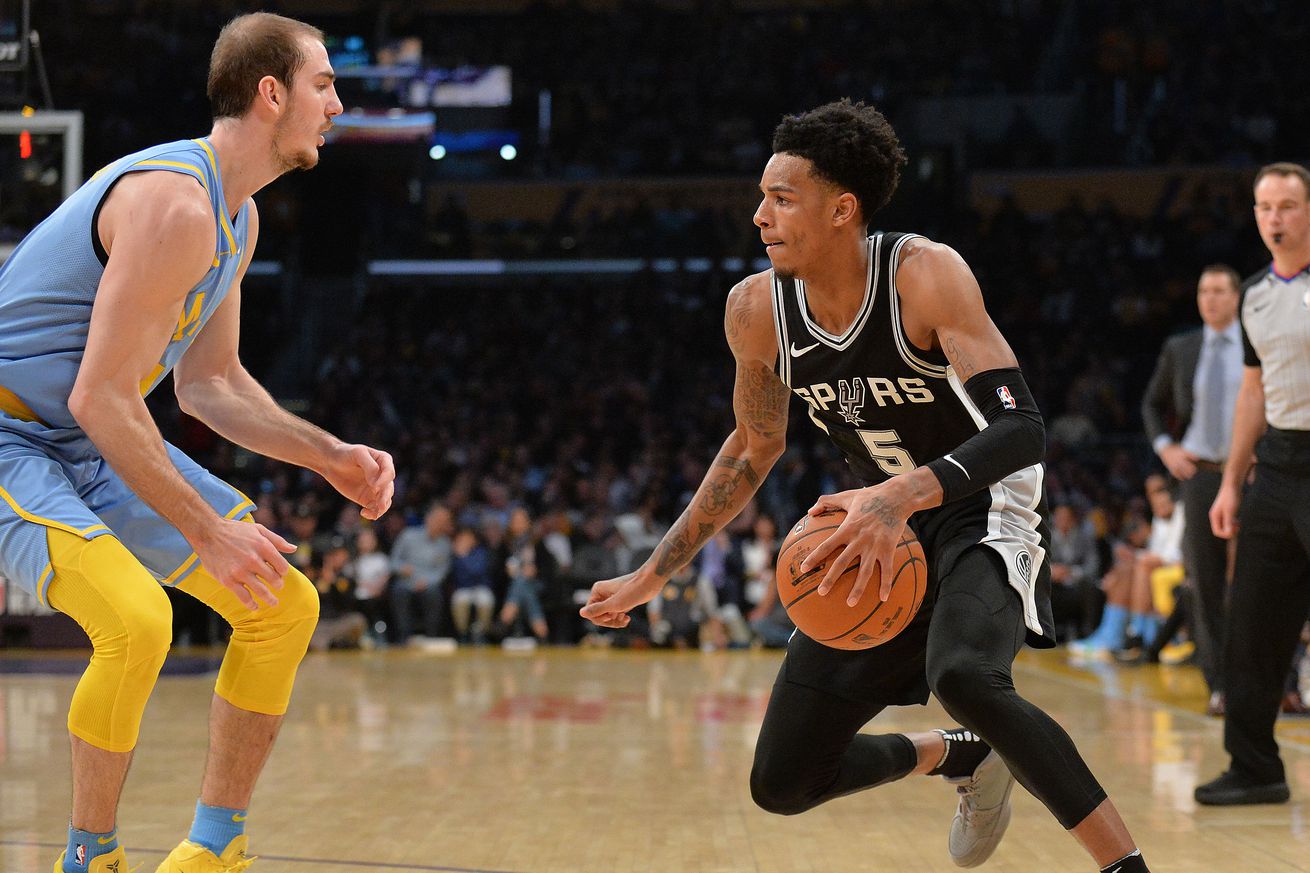 The Spurs’ most intriguing player is also their least complete. Here’s are the next steps in Murray’s development.

Technically, 2018-19 will be Dejounte Murray’s first full season as the Spurs’ starting point guard, and there’s every reason to think the 21-year-old will build on an up-and-down but promising sophomore campaign that earned him All-Defensive 2nd Team recognition and plenty of kudos from Gregg Popovich.

Murray’s already an elite rebounder for his position, an active cutter, and a tough defender (both on the ball and off) where he uses his length to get into passing lanes and initiate fast breaks. He looked most comfortable with the ball in his hands while in transition, pressing ahead using his long strides and making smart, simple reads in the open floor. Based only on hustle, instinct, and measurables alone, he’s been a net positive on the floor — albeit with a handful of glaring holes in his game.

Those shortcomings matter, especially at the league’s most important position where a hot hand can win you games and a steady hand can safeguard you against losing others. Murray’s shaky jumper not only meant fewer shots going in — it strained how the Spurs could build lineups and allowed defenses to routinely help off of him. This could’ve been mitigated by an ability to break defenses down or pull up for jumpers off the dribble, but Murray demonstrated neither skill in year two, and he hasn’t yet shown the next-level passing chops that would force defenses to tighten their on-ball pressure on him.

The Spurs seemed to take a modular approach to easing Murray into his starting role last season, limiting what they asked him to do in the pick and roll and getting extra-positional contributions from him through his effort and rebounding to compensate for traditional point-guard play. While many teams tend to throw first-round picks into the deep end, that wasn’t the case for Murray, who actually averaged fewer passes per game than center Pau Gasol, who was often the offense’s primary facilitator.

Pop will likely retain that measured approach next season, albeit with a longer leash and new opportunities for Murray to take strides in his game. As such, his development and deployment are part of the same conversation as we consider the type of player we’ll see both next year and in the years that follow.

It should be noted there’s no proven roadmap for Murray, whose mix of strengths and weaknesses are quite literally unheard of from a young point guard. We can blindly project him as George Hill 2.0 or Point Andre Roberson, but all statistical comparisons fall short in some meaningful way, and none factor in the distinct drive and individualism Murray exudes. That makes his progress all the more difficult to predict, although I hazard a guess below.

Improvement needed but not necessarily imminent

Most good or great point guards in the modern NBA have this feather in their cap. Murray still may add it somewhere down the road, but he didn’t attempt a single three off the dribble last season, and it’s hard to imagine that being a point of emphasis given where he’s currently at with his jumpshot.

Murray took less than one isolation shot per game last season, finishing in the 17th percentile league-wide at 0.66 points per possession. Lead ball-handlers can often find themselves in beneficial isolation situations in today’s switch-happy NBA, and most know how and when to attack them. Murray won’t likely get there next season, although it’s possible those efficiency numbers see an uptick as his other skills improve.

Should improve with more reps

Shooting at the rim

47% of Murray’s shots were from within five feet of the basket, which wouldn’t be a problem at all if he’d been proficient at making them. Problem is he wasn’t, hitting them at a 53.8% clip that was among the lowest on the team. For a (completely unfair) comparison, 58% of Ben Simmons’ shots were from that range, but he made over 69% of them. Murray obviously doesn’t have his size, but he does possess a combination of length and burst he can make better use of. Of the 143 players who took at least 3 shots per game within five feet last season, Murray ranked 128th in FG%.

We may find that some of his issues come down to a certain lack of touch. Not everyone can accelerate, gather themselves, and still know how much arc or English to put on a shot when met by a bigger dude at the rim.

Murray also has a tendency to contort his body against rim protectors in ways that avoid the shot block but lead to sub-optimal attempts.

The latter is either a bad habit the training staff will correct or a skill he’ll be able to refine — either way, the issue should be remedied in the short term and a marginal improvement overall could be expected as early as next season.

Murray made 27.3% of his catch-and-shoot threes last season. That is significantly worse than average shooters like DeMar DeRozan (35.1%) and Andrew Wiggins (35.4%). He also took just 33 of them, a lack of both volume and proficiency that led to moments when the defense simply dared him to shoot:

Dejounte Murray was again left wide open by Draymond Green through his first two attempts in G4. By his third make, Green began contesting, and even that kind of respect matters for both spacing and what Murray can do off the dribble.

For some players, the variance baked into a low number of attempts might be a pass. With Murray, it’s fairly consistent with his other shooting numbers and a release that’s never looked quite right.

Guys like Stephen Curry, Chris Paul and Kyrie Irving routinely punish teams that give up mid-range looks, all averaging between 50 and 60% on pull-up twos in 2017-18. Donovan Mitchell was also in the low 50s; Patty Mills shot 45% on them; Ricky Rubio made 43% of his. All have range that extends to the three-point line and command defensive attention at all times in the half court.

Murray made 32.8% of his pull-ups last season. And since they were all two-pointers, 32.8% was also his effective field-goal percentage, placing him on the bottom-dwelling Ben Simmons-Dennis Smith Jr.-Josh Jackson rung of pull-up efficiency — 123rd out of 128 players who tried at least 1.5 a game.

Nearly a third of Murray’s attempts last season were off-the-dribble twos, and it remains an important area to develop as he looks to get more comfortable operating in the pick and roll. His longer wingspan may make this a tougher motion to master, but he can be expected to put in the reps on off days and before games and get the opportunities to knock them down next season. There’s plenty of room to improve.

No one stat articulates Murray’s limited offensive role last season, although the fact that he was not first in the team in passes per game or assists per game is a decent starting point. He also ranked 36th out of 47 qualifying point guards in assists per game (2.9) and 46th out of 49 in assist to turnover percentage (1.72).

Many half-court sets began with him bringing up the ball up the floor only to quickly give it up or, at most, run a simple pick and pop with LaMarcus Aldridge.

Murray was largely fine in executing these simple actions, although we also saw how different looks from the defense could quickly short-circuit his decision-making.

He’ll be better next season, because that’s generally what happens when young players get more reps. The pocket passes will get crisper, his anticipation will be sharper, and he’ll benefit from an offense with more weapons than last season. What will be interesting to see is how much more license he gets within the Spurs system, and how he handles it.

Just because something’s a strength doesn’t mean a player can’t improve upon it, right? Murray’s 3.4 Defensive Win Shares last season were better than 2012-13 Kawhi Leonard, and he’ll likely remain top five at his position simply by sustaining his level of activity and effort.

Murray is reliable, if not yet elite, at guarding ball-handlers. He moves his feet well, fights through screens and consistently contests shots without fouling. We’ve not yet seen him fully lock down elite offensive players, but it matters little when he already does so many other things at a high level.

Of the Spurs’ top four pass deflectors of the past two seasons, Murray is the only one left, and an increased role as a disruptor could help shore up a San Antonio defense suddenly lacking in playmaking on the perimeter. He was already entrusted to take chances last season, showing strong instincts when getting out of position to anticipate passes. His 1.2 steals and 2.0 deflections per game should go up next season simply by getting more minutes, but I also wouldn’t be surprised to see his steal rate (2.8%) also increase as he stretches himself further on the defensive end of the floor.

On his defense alone, Murray is a difference-maker, and the Spurs will be able to hide many of his aforementioned offensive shortcomings with DeRozan’s arrival. What should have fans excited, however, is what happens when they don’t have to; when those weaknesses start trending in the right direction, and when he makes the most of his unique physical tools on both sides of the floor.