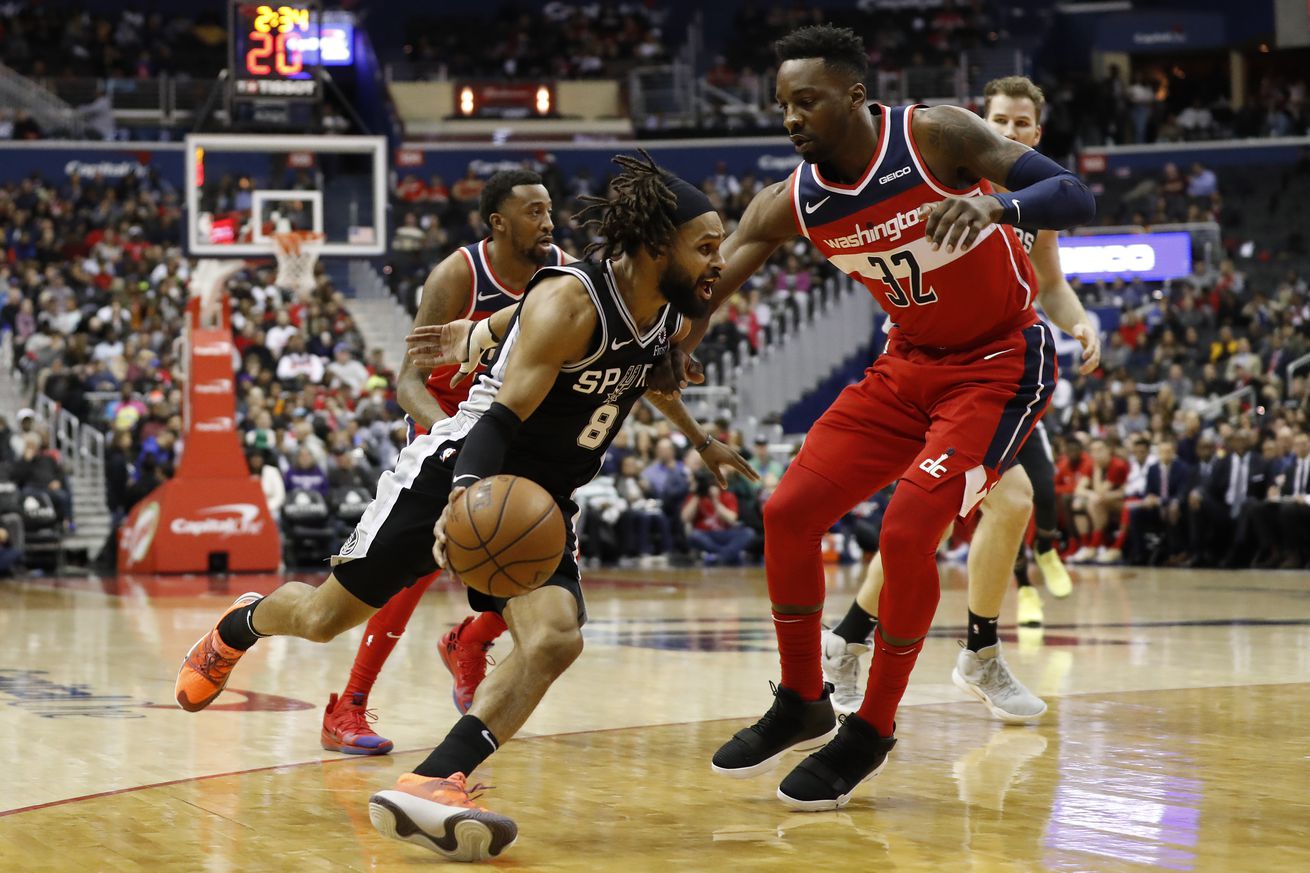 The dream of moving up in the standings is still alive after an easy win in D.C.

I’ve never been more grateful for the Spurs simply remaining relevant this season than I was in the starting moments of Friday’s game against Wizards. I have seen how the other half lives, and it isn’t pretty. The vibe in Washington was dire, the arena extremely quiet and filled with fans of the visiting team. The home squad had nothing to play for at this point in the season and it showed. Watching a squad sleepwalk its way through a thorough beatdown suddenly made me be grateful the Spurs still are fighting for seeding, giving us a reason to tune in.

There’s always a weird atmosphere in late season games against opponents that are already thinking about the next season. The established guys on those teams seem to float through their minutes while those that have gotten a unique opportunity to showcase their skill try their hardest to take advantage. That mix of perfunctory execution by some and extreme eagerness by others, combined with weird, experimental rotations should make those rivals easy to beat, but sometimes it makes them just unpredictable enough to cause trouble. It’s always on the side that actually has something to play for to come out ready and focused to prevent any funny business. Fortunately the Spurs did just that and managed to make Friday’s matchup a pleasantly boring one.

The Wizards could only keep pace for a quarter before the disastrous defense that has plagued them all season doomed them to another loss. Bradley Beal and Thomas Bryant gave the Spurs some issues on defense early, but energetic performances by LaMarcus Aldridge and DeMar DeRozan ensured that San Antonio had enough firepower to stay in control even in a shootout. After that even start the Spurs got a few stops, executed well when the benches checked in and created separation. Other than a stretch in the third quarter in which the Wizards cut the lead to 14, there were no hiccups. Despite being one man short due to Marco Belinelli’s injury no Spur other than Bryn Forbes played more than 30 minutes. Donatas Motiejunas got to make his debut and Lonnie Walker got to close the game. It was a good, old fashioned blowout.

The only semi strange thing about it really is that it came against a Wizards team that started the season with ambitions similar to the Spurs’. There’s a universe in which Washington doesn’t completely implode amidst injuries and disastrous chemistry and is fighting for a playoff spot in the lower half of the East right now, just like San Antonio is doing in the other conference. It certainly wouldn’t have been shocking to see the Spurs share the same fate as the 2019 Wizards and lose enough to be mediocre but not enough to be able to sell hope in the form of a top draft pick at the end of the season. An injury to DeRozan or Aldridge, the defense proving a bit more permeable than it ended up being and San Antonio could have been a lottery team. Several experts predicted that outcome, in fact.

Fortunately, things went a different way. The Spurs couldn’t prevent a drop from contender to playoff team but had a good enough structure in place to avoid sliding further down to irrelevance, at least for now. As a result, we get to enjoy the entire season instead of hoping it would end already. And for that, we are lucky.

White has to take those shots when the defense goes under like that. He’ll hopefully make enough to keep defenses honest. Keep letting them fly, Derrick!

Hopefully we’ll have a couple more blowouts, so he can get a few more minutes before the playoffs while Aldridge rests.