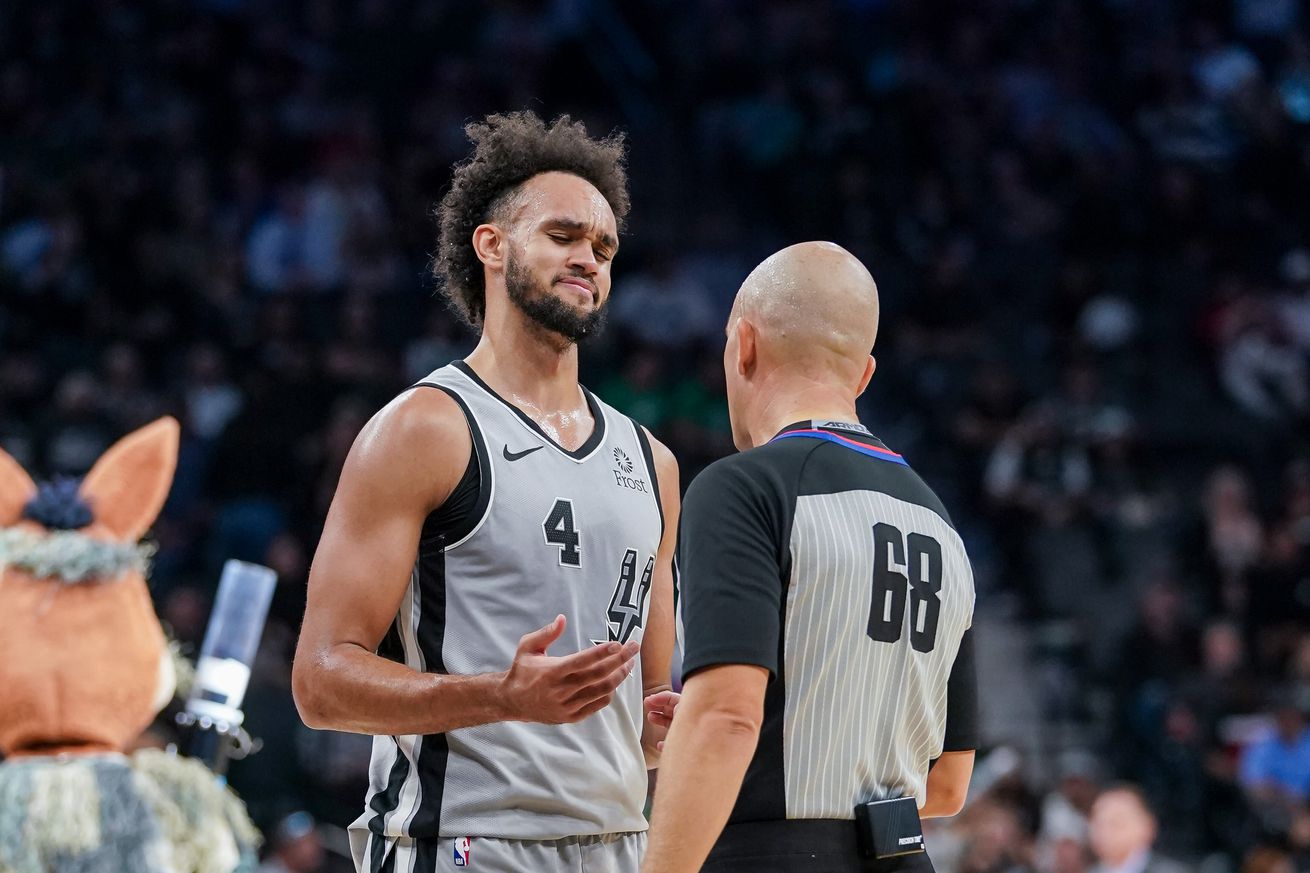 Featuring a loss San Antonio was in for all of 3 minutes, but kept trying for the full 48.

To quote Dire Straits’ final album: “Sometimes you’re the windshield, sometimes you’re the bug.” Saturday night the Boston Celtics took on the role of the former, while the San Antonio Spurs did their best impression of the latter. In a game that somehow managed to feel more like an away game than perhaps any of San Antonio’s actual away games, it was clear by the end of the first half that for whatever reason, the Spurs just didn’t have it.

There were no obvious outliers to blame. No major (and presumably minor) injuries, no cross-country travel, no bodies wearied from the wear-and-tear of the first game of a back to back. This was just a good old-fashioned whooping, plain and simple; which is honestly a bit of a relief. As any human being who’s been alive long enough to know knows, some days you just get licked.

It could certainly be argued that this was the somewhat predictable result of an inevitable letdown coming off the team’s most comprehensive victory of the season; it’s not every night that one of your best players scores just shy of forty-points on eighty percent shooting. But after teasing the home crowd by surging to an early 7-0 lead, the Spurs allowed the Celtics to score seven straight to even it back up, held on for a minute or two, and then cratered like an over-picked zit, relinquishing what would go down as their only lead of the night. The Celtics would finish the quarter up 39-30, and San Antonio wouldn’t get within ten points of them for the remainder of the game. Take away that deceptive four-minute burst, and Boston would have gone wire-to-wire to win it.

It’s my experience that, generally speaking, it’s hard to take too much away from runaway wins and massively one-sided losses, so I’m always cautious about labeling a match-up like this, but Gregg Popovich certainly wasn’t, expressing his disappointment in a performance he called “non-aggressive and non-physical”, while praising the Celtics for the inverse. And to be fair, he had a point.

After coming out with a head full of steam, the Spurs seemed intimidated by Boston’s hyper-active defensive play and sharp passing, as Boston turned the tables on them with a barrage of timely threes and slick interior play. And it quickly became clear that their well-timed switches and doubles were getting into San Antonio’s heads as they piled up another fifteen turnovers on the night in a display that featured both the occasional bout of sloppiness and chronic over-passing.

By the arrival of the third quarter the Spurs looked alternately out-of-it and desperate, as they consistently ignored LaMarcus Aldridge and tossed up shots far too early in the shot clock. That Pop subbed out all five of the players on the court a-la-hockey more than once (And once in the first quarter!) said everything that needed to be said. This just wasn’t going to be San Antonio’s night.

But one of the wonderful things about nights like this is knowing that this is just about as badly as your team could reasonably play. And that it came against one of the best teams in the league is hardly shameful. If you think about it, three of San Antonio’s four losses have come against three of the best teams in the league, and San Antonio was more competitive against both the Los Angeles Lakers and Clippers than either final score indicated. I don’t know about you, but I’d rather get these sorts of games out of the way early in the season, and I’d rather not have it happen against a team like say…the Knicks.

This was the crème-de-la-crème of losses as far as losing goes; a fart in a fifteen mile-an-hour wind, the stench of which quickly blows away. Better to just take it on the chin and move on. Heck, this was a night that made Marco Belinelli look like a prince among men as he tallied his first multiple three-pointers-made + zero turnovers game of the season. (He made two. Let’s not get crazy here, ya’ll.)

This is the Spurs night in a nutshell: 1 block, 1 attempted fast break, 6 missed shots. pic.twitter.com/RdUnOKpq9A

All-in-all, it’s hard to get an exact bead on this team. They’re still in the developing phase, regardless of what the denizens of Spurs Twitter might insist. A few more tweaks, and another twenty-or-so games should give us a better idea of this team’s ceiling, but for now they look a bit like last years team inconsistency-wise. Only time will tell if that’s the truth of the matter, but in spite of how it might feel, that would still put San Antonio near the fifty-win mark and would involve betting on this team not quite figuring it out. I’m not quite sure I’m ready to make that bet just yet.

Playing You Out – The Theme Song of the Evening: ‘The Bug’ by Dire Straits