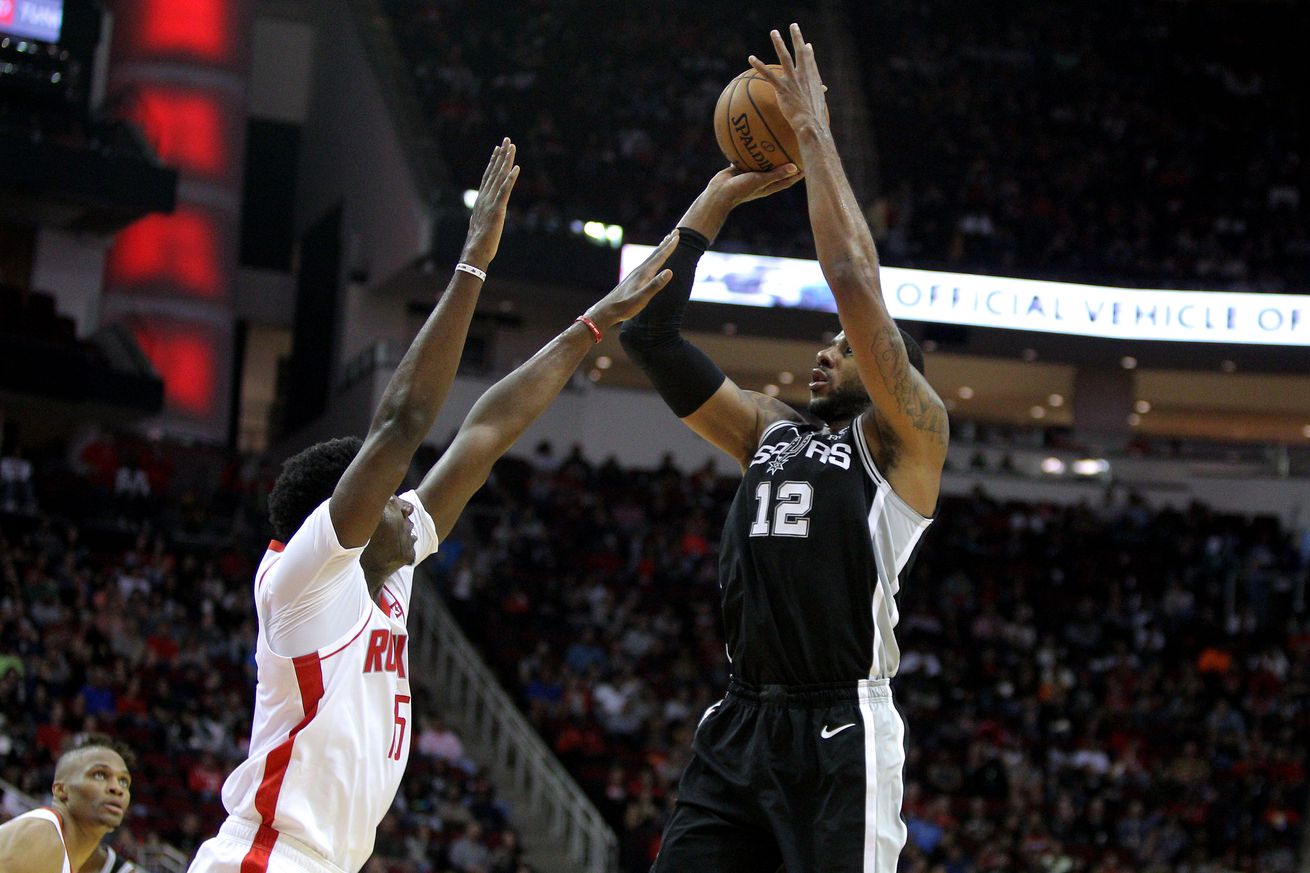 A deeper look at the narratives surrounding the Spurs’ “inevitable” decline, and why they might be wrong.

One of the key concerns about the Spurs’ chances of extending their 22 season playoff streak in this year’s loaded Western Conference is the expectation that their offense will regress. With an unpopular offensive profile that neglects the most valuable areas of the floor in favor of shots that have slowly been excised by much of the rest of the league, the Spurs’ offense is unique in today’s landscape. But different does not mean worse, and there’s a good chance the concerns about the Spurs ability to score aren’t just overblown: they’re just wrong.

Last year’s Spurs built the 5th best offense in the NBA on a foundation of the most inefficient shot in basketball. Taking nearly half their attempts between the restricted area and the three point line put the team in a league of its own when it came to shot distribution.

The Spurs, as you’ve probably guessed, are that lonely little line that starts below all the others on the left, but quickly finds itself well above the huddled masses diving together in the midrange section of the chart, before falling back to the bottom of the pack on the right.

The unique nature of their shot profile, which would’ve looked right at home in the NBA of a decade ago, makes it easy to assume the team’s outstanding shooting from last season will regress this year. The logic is simple: it’s unreasonable to assume that any team is so much more accurate that it can overcome the value disadvantage of the midrange.

But that’s exactly what the Spurs did last year by posting the 6th best eFG% in the league. The question then becomes whether the Spurs can continue to shoot that well, or if they’re in for a high-speed collision with the mean.

The problem with predicting that the Spurs’ shooting will regress is it’s based on the assumption that they were shooting much better than can be expected, and that doesn’t really appear to be the case.

For starters, the Spurs as a team have always shot well. They’ve finished in the top 10 in the league in eFG% in 9 of the last 10 seasons, with a relatively stable shot distribution the entire time, despite the league-wide shift away from the midrange that occurred in that same period. The Spurs took slightly fewer shots at the rim last year than ever before, but they also attempted the most threes in franchise history, a trade off that left the team’s midrange attempts just on the high end of normal (for them) for that 10 year period.

It’s also important to note that they weren’t even the most accurate team in the league in the midrange last season, finishing 2nd behind the Warriors. They were 1st in the short midrange (4-14 feet), but 6th in the long midrange (14 feet-3 pt line) behind the Warriors, Trail Blazers, Raptors, Celtics and Hornets.

Once again, it’s easy to pick out the Spurs, although they don’t stand out nearly as much in the accuracy of their shooting as they do in the location. The Spurs are on top of the pile in the short midrange and the corner 3, and near the top in the other zones. That makes the short midrange the most obvious candidate for regression since they led the league in both number of shots and field goal percentage in that area.

Breaking it down to individual shooting, five players took 80% of the Spurs’ 1,846 shots between 4 and 14 feet: DeMar DeRozan, LaMarcus Aldridge, Rudy Gay, Derrick White and Bryn Forbes. This was Derrick’s first season with enough shots to really reflect his accuracy, but here’s the previous two season’s worth of short midrange shooting for the other four alongside last year’s numbers.

DeMar under-performed versus his last two years, while LaMarcus and Rudy over-performed, and Bryn was about the same. If they had all shot the same as the two years’ prior, the Spurs would’ve made about 10 fewer buckets. Ignoring all the other potential outcomes of a missed shot for simplicity’s sake, that’s 20 fewer points over the course of a season, or about a quarter of a point per game. If that’s what we mean when we talk about the Spurs’ offense regressing, then sure, it’s totally within the realm of the possibility. They could even go further the other way, with the team as a whole shooting below what would be expected.

Shooting is a fickle beast and the type and quality of attempts isn’t reflected in this data. Changes in how defenses choose to play the Spurs could dramatically affect all of this as well. There’s certainly no guarantee they’ll shoot as well as they did last year, but it’s unreasonable to expect a dramatic drop off from a season that was not that much of an outlier, at least in terms of short midrange accuracy.

The other obvious case for potential regression is the team’s three point shooting. The Spurs led the league in accuracy from deep last season, hitting 39.2%. Where that differs from their short midrange shooting is that the Spurs took fewer threes than any other team last year. One of the reasons that’s the case is only the team’s best shooters took a large number of three point attempts.

In fact, nearly 84% of their threes came from 5 players: Forbes, Marco Belinelli, Patty Mills, Davis Bertans and Rudy. Losing Davis hurts — he led the team in three point accuracy and was 4th in attempts — but 87.6% of his shots were catch and shoot looks, an easier skill to replace than the off the dribble threes that comprised nearly a third of Bryn and Marco’s 3PAs and well over a third of Patty’s.

With some combination of the newly acquired DeMarre Carroll and Trey Lyles replacing Davis in the lineup, the team will obviously be less accurate from deep, but there’s another and even better reason that’s the case: this season’s squad seems prepared to open up the aperture a little in terms of who can and should take threes.

If LaMarcus, DeMar and Dejounte Murray combine for even a handful of attempts per game, there’s a good chance the Spurs’ three-point percentage will drop at least a few ticks. But if those are wide open looks or late clock attempts, they’re probably still good offense in comparison to what else the team could generate in that moment.

Still, it’s not hard to see how little drops in efficiency from a couple of different areas of the floor could amount to a larger overall decrease in offensive production. Losing a couple of points per 100 possessions would leave the team with an average offense, which, without a corresponding improvement on defense, would lead to exactly the kind of hard end to the Spurs’ incredible streak of success that many expect.

And that’s without mentioning potential age-related decline from the team’s elder statesmen. LaMarcus is 34, while Marco, DeMarre, and Rudy are all 33. Father time comes for everyone eventually, and it’s not always clear beforehand who’s next in line. But it’s not like any of their games are especially dependent on athleticism, so it seems like a stretch to predict a sudden decline based on nothing other than a birthday.

Again, little issues can add up to a big impact, but there isn’t a smoking gun that somehow proves the template for offensive success that worked last year is somehow going to be untenable this season.

On the other side of the coin, there are some compelling reasons to expect the team to score even more efficiently than last season. The first is continuity. After an unprecedented amount of turnover last summer (at least for this franchise), the Spurs had a return to normalcy over the last few months. The only major change to the roster is a healthy (and freshly extended) Dejounte Murray.

It’s fair to question how he’ll affect the offense, but plugging him into what became a well-oiled machine over the course of the season shouldn’t be nearly as difficult as juggling all the new faces and injuries that characterized this same period last year. More importantly, if his performance in the preseason means anything, Dejounte appears to have developed into enough of a threat to attack off the dribble and knock down open shots at a reasonable clip that he shouldn’t have a negative impact on that end of the court.

There’s also a good chance his defense and rebounding will be enough to allow the Spurs to stick with one true big for most of the game. Their offense was much better last year with only one big on the court at a time, so Dejounte could have an indirect but very positive impact on their scoring. Even ignoring Pau Gasol and Donatas Motiejunas, the numbers for just LaMarcus and Jakob Poeltl are remarkable.

However they choose to align their bigs, the Spurs offense is in for a significant boost in another area, because with one of Dejounte or Derrick on the court the whole game, their defense is going to generate more steals and more stops, both of which lead to better offense. The Spurs scored 131.2 points per 100 possessions that began with a steal and 116.5 points per 100 after a missed field goal last year, but only 112.6 per 100 after a made field goal.

Trading a few possessions per game working against a set defense for opportunities to score while the defense is scrambling, cross-matched or otherwise in flux should be more than enough to offset the concerns about the team’s midrange accuracy or the loss of Bertans.

At the same time, having Derrick coming off the bench is an incredible luxury on offense, too. The Spurs were 41-26 in games Derrick played last season, which is a 50 win pace, with a net rating of +3.5. On the other hand, they were just 7-8 in the 15 games he missed, with a net rating of -4.4. Expect his +/- to be through the roof as he, Patty and Jakob combine to eviscerate opposing reserves. Very few teams have anything like the depth the Spurs do, meaning they can throw a full 48 minutes worth of starters and high quality rotation players out on the floor, which will give them an advantage almost every night.

Though it’s still conjecture at this point, there’s also a strong possibility the Spurs have another breakout sophomore season on its way. There’s no clear answer as to when or if Lonnie Walker IV will get the consistent minutes he needs to break into the rotation, but if he can, he’ll add a dynamic play-making presence on both ends that could dramatically alter the team’s trajectory.

There are an awful lot of variables involved, but the case for the Spurs’ offense to get worse feels like it’s rooted as much in a distaste for its style of play as it is in actual facts. Of course, the Spurs may well shoot worse from the midrange and three this season. LaMarcus could finally see a down turn in his productivity, and adding Dejounte to the mix could clog up the rhythm and flow of the Spurs’ motion offense. But it seems just as likely that fully embracing one-big lineups, getting a few more easy buckets every game, and dominating with their bench units will more than offset all of those issues.

In the end, none of those details really matter to the Spurs. They’re going to continue to take the best shots they can find in any given context. They’re going to control the pace, and they’re not going to turn the ball over. They have proven scorers and a system that works. If anything, the Spurs offense should be even better this year.