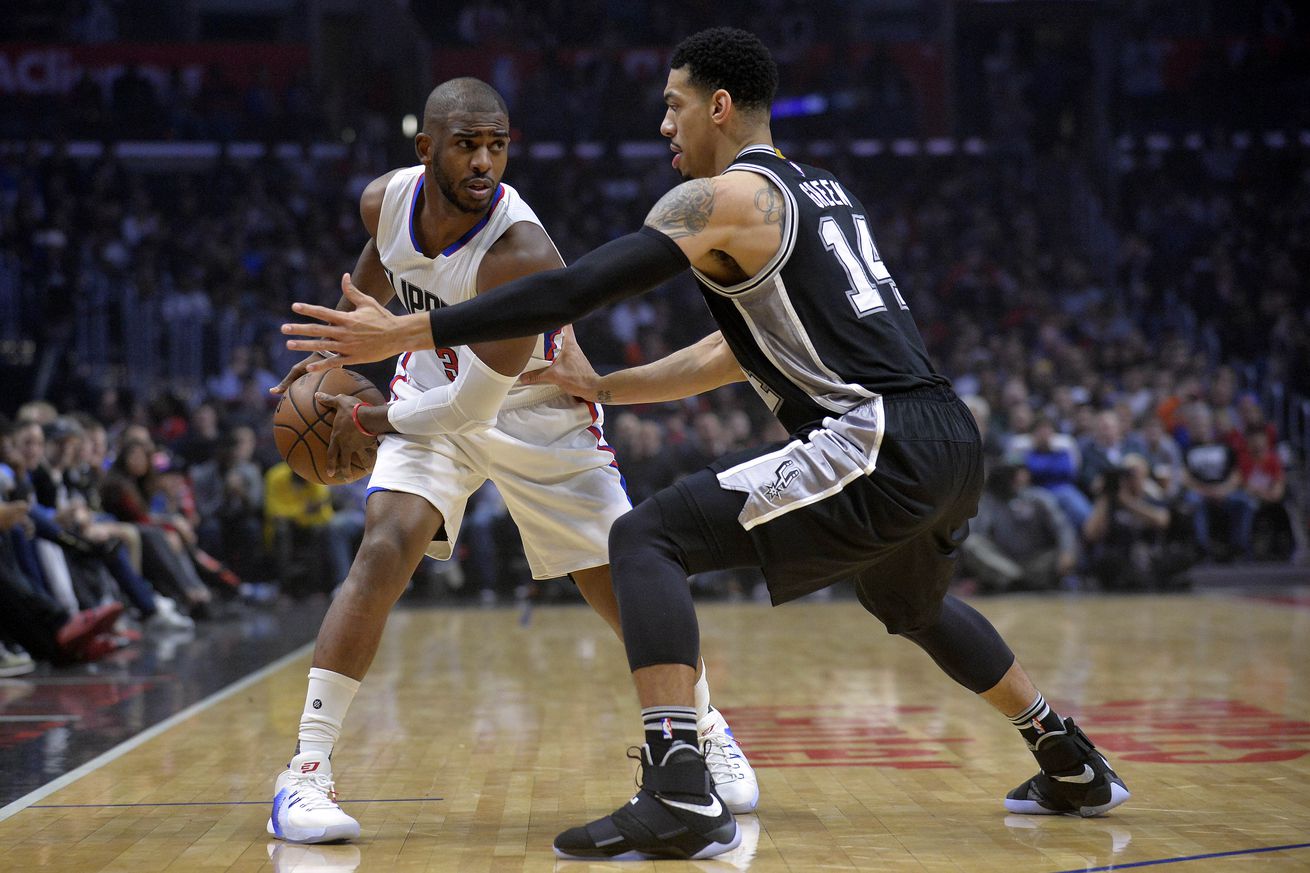 The Spurs could clear room for Chris Paul, but they would have to undergo some deep cuts to make it work.

After a short, frustrating series against the Warriors, the Spurs‘ offseason has officially ar. Only a few days into it, we have some intriguing rumors about free agency.

Chris Paul, who has been mentioned as a potential target for the Spurs since the Clippers imploded this season, apparently remains an option. ESPN’s Zach Lowe said that there’s “mutual interest” between player and team.

There have also been some murmurs around the league, recounted by TKTK, about Derrick Rose emerging as a potential fallback option, which is much less intriguing but is probably more realistic.

Paul would be the prize for the Spurs, of course. They have never added someone of his caliber in free agency. Now it looks like they will at least get in the room with him, like they did with Kevin Durant last offseason.

Unfortunately, the realities of the salary cap suggest that it will be nearly impossible to sign him.

The Spurs won’t have cap space when the offseason starts

For all of my calculations, I will not be counting on David Lee or Dewayne Dedmon potentially returning, as they can get more money on the open market. I’m also not counting Manu Ginobili’s massive cap hold, since he might retire. I’m assuming Bryn Forbes‘ option won’t be picked up despite his solid play late in the year. If the Spurs want to make a splash in free agency they would need to maximize their cap space, and Forbes would be a likely casualty. That’s the same reason I’m also assuming they would trade their pick in the 2017 draft or stash a player.

Under these conditions, here are the Spurs’ salary commitments for next season, courtesy of Basketball Insiders:

Now, since the cap is expected to be set at around $102 million, the Spurs would be $29 million under it.

Unfortunately, that total doesn’t include cap holds for Mills and Simmons, nor Pau Gasol’s contract if he opts in, which seems to be all but a certainty. If we add those, the number jumps to $98.145.017. Finally, we have to add charges for open roster spots, bringing the total to $100.591.862. Add the exceptions, which count against the cap unless renounced, and the Spurs will be over the cap.

So as you see, the Spurs don’t really have cap space. They could create some, but they would have to make some tough decisions to do it.

Let’s assume the Spurs are ready to renounce their rights to Mills, in order to clear his cap hold, and the exceptions, to go below the cap. Simmons’ cap hold is small, but they would need all the cap room they could get, so let’s say they renounce him too. That leaves San Antonio with $93.751.709 in salary. They need to get that number down to around $68 million to accommodate Paul’s $34 million max, so they would have to salary dump and waive-and-stretch players in order to get there.

Leonard is obviously untouchable. Moving Aldridge without getting anything back is just not smart. In a vacuum, Parker would be a perfect candidate to either be traded or stretched, but there’s too much history for that to happen, unless the Spurs assume he’s done with basketball after his injury. So far, there’s no indication of that.

That leaves Gasol and Danny Green as potential targets to shed salary. If the Spurs manage to somehow dump both — not easy at all — they would get close to their goal, as they would have $69.185.439 in committed salary. Move Anderson as well or get Paul to take a little less than the max and they are there.

The problem is they would have only six players under contract: Aldridge, Leonard, Paul, Parker, Dejounte Murray and Davis Bertans. The only tools to add more pieces would be the room exception, worth $4.3 million, and minimum contracts. It would be really hard to fill the two open slots in the starting lineup with quality players and the Spurs would have no depth. It’s hard to see that team contend, so Paul would have no motivation to join it.

Whenever a player is interested in joining a contender but the money doesn’t work, the simple solution seems to be to ask that guy to leave money on the table. After all, if Paul wants to contend as a Spur, he can. He just has to sign for less, allowing San Antonio to, for example, keep Green, Anderson and their first round pick. Fill the rest of the roster with veterans and Euro stashes and it might be good enough for another West finals appearance.

Unfortunately, it seems extremely unlikely that Paul — or any other free agent — would decide to do that, considering that just to join the Spurs, they would be giving up a lot of money already. In Paul’s case, he could make in excess of $200 million over five years with the Clippers. In San Antonio, he would make around $150 million over four years and would have no shot of making up the money he would lose by opting for a shorter contract.

So is it technically possible for Paul to sign a four-year, $80 million contract that would allow the Spurs to keep some talent alongside him? Sure, but it would cost him in the ballpark of $100 million to do so. That’s an obscene amount of money to give up, especially to join a team that can’t guarantee a title. Paul is too smart to do that.

That’s why we are starting to hear rumors like the one about Derrick Rose. He would simply be much cheaper — because, well, he’s been terrible — and therefore more viable as an option. Paul is simply too good, which means the Spurs can’t afford him without huge sacrifices.

It’s extremely unlikely the Spurs add any elite player. Even if there’s mutual interest, the numbers just don’t work. The much more likely scenario involves making an upgrade via trade, or keeping the current core together for one more year.

The good news is that this group made it to the West finals and outplayed the Warriors in the few minites they had Kawhi Leonard. Even if they remain a step below the class of the conference, they are still really, really good.

A big move for a star might not be in the cards, but another winning season and deep playoff run should be. That’s not bad at all for a team in transition.