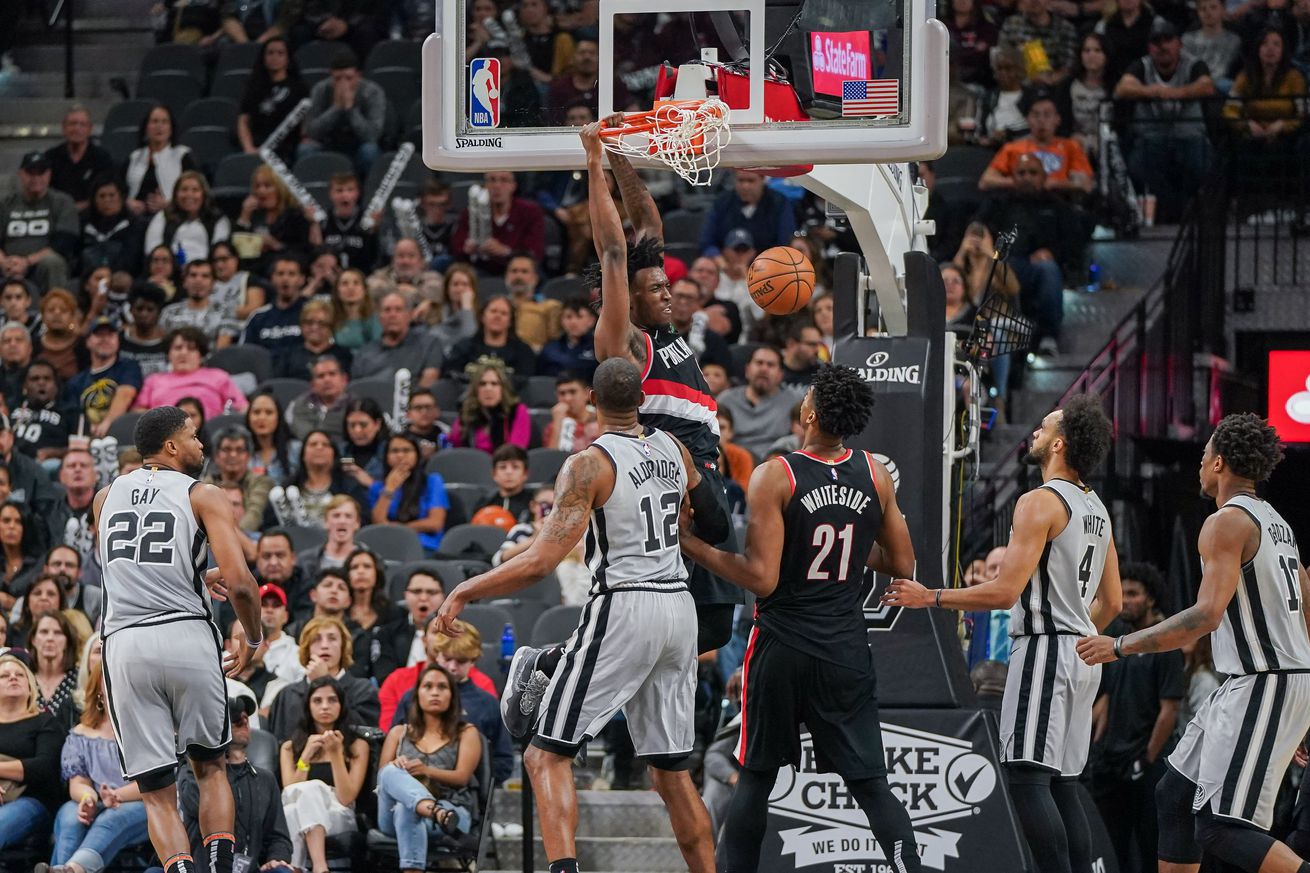 San Antonio always seemed to do a good job of juggling the future and present while keeping its eclectic casts of players in the air too. But this season…

Despite returning most of their 48-win core from last season, the 2019-20 Spurs look like anything but a team bound for the postseason, at least not in mid-November. After pulling off narrow wins against lottery teams amid their 5-3 start, they find themselves on an almost-unprecedented 6-game losing streak, with poor starts and porous defense rearing their ugly heads throughout.

As easy as it is to draw a throughline across the season’s first 14 games, it’s harder to trace a clear path to them righting the ship like they did last December, after they dropped to 11-14. Part of that is due to the disparate realities of this year’s roster, while another has to do with how they’re balancing those realities, needing to satisfy while developing, among other pieces, a newly minted young guard playing the sport’s toughest position.

The Spurs’ big two of LaMarcus Aldridge and DeMar DeRozan are lightning rods of criticism, often unfairly. They’re good-but-not-great primary options, equipped with glaring flaws and understated strengths, and neither was intended to be the team’s go-to guy, at least not as part of the Spurs’ intelligent design. But criticism comes with that paygrade and role, and it’s fair to put some of the starting lineup’s multiyear struggles on its two lynchpins, especially when neither has taken their game beyond the arc in a significant way. That style didn’t kill the Spurs last season, but it seems to mess a bit more with the fit of Murray (who’s been best in the open floor rather than the half court) while narrowing a margin of error that was already thin last season.

That starting five of DeRozan, Aldridge, Bryn Forbes, Trey Lyles and Dejounte Murray has been nothing short of terrible. In total, 15 lineups across the NBA have shared the floor for at least 90 minutes. The Spurs’ group has been the worst of any — by far — sporting a net rating of -8.9 in 148 minutes of action, which is the 4th most minutes of any lineup in the league. If you’re looking for a results-based reason behind the team’s 5-9 start (and -2.1 overall net rating) you could start with them putting out one of the least effective combinations in the NBA in one of the highest volume of minutes.

Why they’ve done so makes sense in a vacuum. Gregg Popovich is working in the theoretical point guard of the future in Murray and, when you’re playing the long game like the Spurs are, a bit of stability for your floor general can help him get comfortable after a season lost to an ACL injury. Murray’s issues in creating, seeing the floor, and making plays that go from Good to Great™ are somewhat mitigated by Aldridge and DeRozan’s shot-making, and Murray’s still-unproven outside is shored up by the presence of Forbes and Lyles.

The problem the lineup finds is what it loses in making such allowances: possessions where Murray is the primary creator can sputter deep into the shot clock, putting a low offensive ceiling on the lineup that turns its superior off-the-dribble creator in DeRozan into a toothless off-ball player, and that lineup has averaged a lowly 101.3 points per 100 possessions. The 30th ranked Bulls offense averages 102.5. Meanwhile the defensive end, where you’d hope a lineup with Murray would be better, suffers from 1) playing against offenses that aren’t taking the ball out of their own hoop enough and 2) the lineup’s physical limitations. Opponents can hunt Forbes, run DeRozan off screens, attack Aldridge on switches, and there’s not enough playmaking to erase mistakes as they occur. It’s becoming more clear that a change will have to be made in which Pop pushes his chips in a seemingly less-safe direction that jeopardizes the balance he aimed to strike.

Treating Murray, DeRozan and Aldridge as hypothetical untouchables, Pop’s solution could come in benching Forbes — one of the team’s best success stories — for a bigger player that pushes DeRozan down to his more natural shooting-guard role or swapping out Lyles — who’s shown great promise — for a more perimeter-oriented player. Another card on the table is investing in a Murray-White backcourt (either to start or at least close games) that amps up the perimeter defense if nothing else; but the team has been almost unnervingly patient in how it’s assimilated those two. Again, this is understandable from the point of view of avoiding spacing issues (White is also still more of an on-ball guard than catch-and-shoot threat) and get Murray eased in first, but it’s yet another compromise by not putting your two young talents on the floor at the same time.

DeRozan himself was a hedge as the centerpiece of the Kawhisis fallout. That trade had dual focuses on staying competitive by bringing him in while building for the future with the ancillary pieces that came along with him. People can belabor whether or not there was a better return out there value-wise (Leonard, after all, succeeded tremendously in purposefully tanking his own market), but it’s accurate to say that PATFO’s goal was divided across two timelines, and getting DeRozan, Poeltl and the pick that became Keldon Johnson was a fine marriage of the twin goals. Just like everything else the team is doing, there’s nothing objectively wrong with how that panned out.

Where things get subjectively problematic with the Spurs is the confluence of these hedges: in handicapping yourself at the game’s most important position while trying to win in the present; in satisfying the playing styles of your two retrograde stars at the expense of the way the rest of your roster is made up; in pumping the brakes on opportunities for players like Lonnie Walker when the payoff in terms of in-season success may not be as high as the organization or fanbase is used to.

The Spurs have long been expert hedgers and micro-tinkerers, finding ways to move forward and win today, while incubating the future on the backburner. It thus makes sense for Pop and company to be a little reluctant to shake things up, even if the rules that apply to this team have changed. It is November after all.

That said, the current formula does not appear to be working, meaning that improvement — or at least the attempt to improve — will have to come through a gamble or three. We’ll see how they pay off.