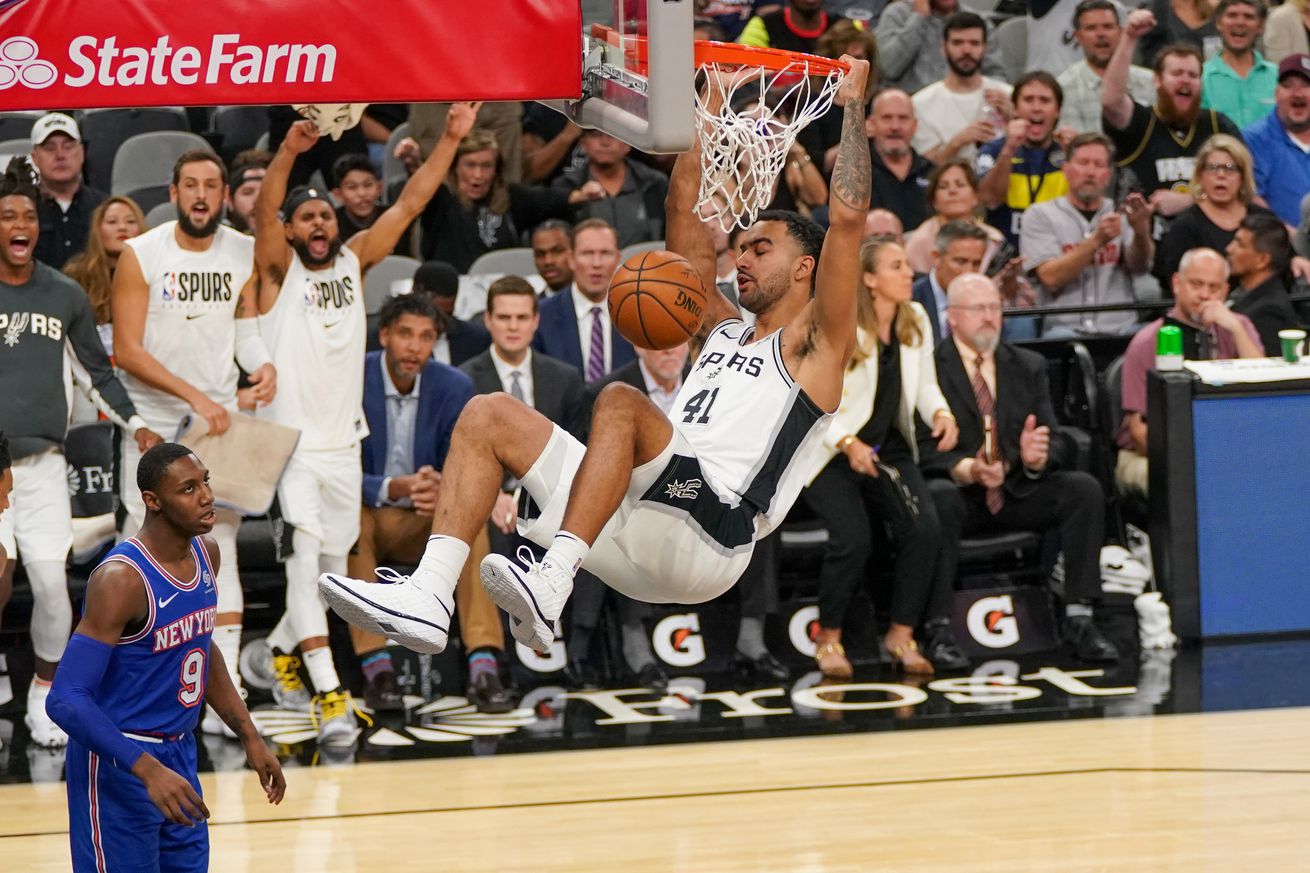 Lyles’ newfound hustle is helping San Antonio early in the season, but can he add to this bare bones version of his game and become the well-rounded starter the Spurs need?

Trey Lyles was probably the Spurs’ Plan C after signing Marcus Morris and keeping Davis Bertans. Lyles just happened to be available late in free agency when San Antonio desperately needed some depth at power forward, so they signed him.

Five games into the season, Lyles has gone from afterthought to entrenched starter, getting minutes over the stable of Spurs big men prospects and a more heralded addition, DeMarre Carroll. It’s been one of the most unexpected developments of this young season, something no one could have seen coming.

Yet, even more surprising than watching Lyles get starter’s minutes has been seeing why and how he has gotten those minutes. In his fifth season in the league, Lyles has completely changed his game.

The old Lyles was intriguing but inconsistent

Lyles came into the league as a highly touted prospect despite playing out of position at small forward on a stacked Kentucky team that featured Karl-Anthony Towns and Willie Cauley-Stein at the big men spots. The appeal with him was that he had the perimeter tools to eventually develop into a floor-spacing, playmaking power forward. Both the Jazz and the Nuggets tried to capitalize on his potential in the hopes of making him the perfect complement to their star centers, but both ultimately became disenchanted with him.

The biggest knock against Lyles in his first four years in the league was that he was simply too inconsistent. He’d have stretches in which he would be productive, normally when he was getting touches, but the quality of his offensive performances ebbed too much, and he didn’t do the effort things like rebounding or defending well enough to make up for it. He was a power forward who couldn’t guarantee spacing or quality defense every night, and that type of player is simply not valuable enough to earn a significant role on an NBA team.

The new Lyles is limited but helpful

To anyone who has just started watching Lyles this season, the above description of his game sounds ridiculous. They’ve only seen a player who stays out of the way on offense, focuses on moving the ball and shoots only when wide open. On defense he does whatever is needed, from guarding bigger players to switching onto guards, and he does it well. His biggest contribution to the boxscore, by far, comes from his exceptional rebounding. Beyond the stats, he’s just doing the little things on both ends, like getting to loose balls, deferring to the stars and generally playing with energy.

This new version of Lyles is rightfully earning minutes. With the caveat that it’s too early for this type of stat to tell us anything significant, it’s important to note than with him on the court, the Spurs have outscored opponents for a slightly larger margin than they have when he’s sat. He’s doing enough to actually help the team when he’s on the court while allowing Gregg Popovich to not have to start Jakob Poeltl (who is killing it in a reserve role, or Rudy Gay), who’s probably happy to not have to face starting power forwards as much anymore. Lyles seems on his way to becoming the latest in a long line of limited but helpful role players that have started or play big roles for the Spurs.

To be more than just another good team, the Spurs will need the two versions of Lyles to coalesce

There’s just one issue with Lyles: he’s playing too much for someone that seems to have such little impact. His rebounding is good, but not good enough to prevent the Spurs from actually getting close to being outrebounded when he’s on the floor. He doesn’t take touches away from anyone, but the starters are still struggling greatly to score so far. His defense has been solid, but San Antonio is still allowing too many points per possession when Lyles shares the court with Aldridge. To be clear, Lyles is not the cause of any of those issues, which are largely holdovers from last season, but he also doesn’t appear to be the solution to any of them, at least so far.

He could be, if only he started incorporating some aspects of the old Lyles back to this current version. The most important one is outside shooting. So far opponents are closing out on Lyles aggressively enough for him to be able to pump fake and drive, but if he continues to be reluctant to pull the trigger, they will start daring him to shoot. If he can start connecting from outside at a reasonable clip and volume, he’d change the dynamic of the starting unit and allow Gregg Popovich the freedom to maybe try bigger lineups that could rebound and potentially defend better without surrendering too much spacing.

Lyles made the right decision to simplify his game and give the Spurs exactly what they needed to start the season. This new hustle-oriented version is doing enough on the fringes to earn playing time on a team that, while not looking great so far, has been racking up the wins it’s supposed to get.

For the Spurs to be a truly dangerous team, however, they’ll need more from one of their emerging core players. Hopefully Lyles can incorporate the good parts of his old self to this new version and become the type of force that does more than just the little things. If he does, he could raise the Spurs’ ceiling and be so much more than just a pleasant early season surprise.