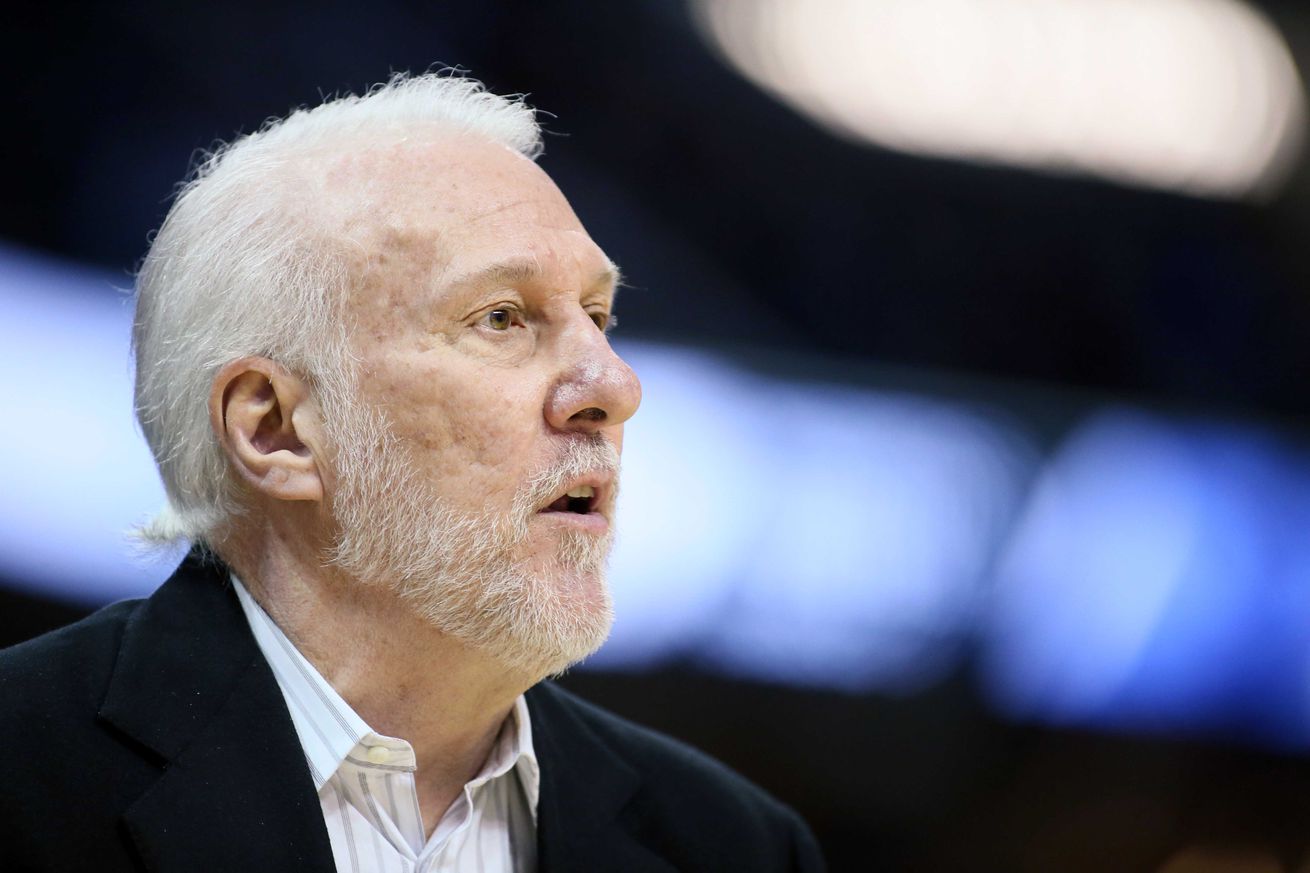 Revisiting the stats we singled out before the season began.

Before the season began, I singled out one stat for every Spur that might serve as a bellwether for their success. Now it’s time to follow up to see how those predictions fared, as well as highlight other numbers, good or bad, that capture what kind of season each player had. Some of these focused on what drove that success (or lack thereof), while other numbers are more the end result. Whether cause or effect, the idea was to find one number that best told the story of that individual’s season.

Like last time, we’ll go player by player, first looking at the original stat chosen and the over/under, then whether the player hit the over, and, finally, whether or not it was a good stat to go with at all. If the stat is no longer all that telling, I’ll throw out a new one or three.

(In what should be a surprise to no one who’s read my stuff, a lot of these were wrong.)

Good choice? For the most part. Combining his automatic shooting stroke with minimal mistakes on offense (and improved defense) was key for Forbes, who started all but 1 game and scored the 3rd most total points of any Spur. While he also made 47.2% of shots from midrange and improved his percentage at the rim from 50.6% in 2017-18 to 57.4%, being a lethal volume shooter from beyond the arc (he attempted 5 threes a game) is what ultimately kept him a part of the rotation and a full-time starter.

Better stat: Points per game (11.8). A bit simple, but an absurd average for an undrafted guy like Forbes to hit on a playoff team. Just remarkable.

Good choice? By default. Does a low minute count have anything to do with Walker’s outlook or developmental progress? No (I’m still super high on him), but it does speak to the impact he had in San Antonio in his rookie season. Given the minimal playing time, it’s all we have to go off of.

Good choice? Not really. No, Metu didn’t hit his over/under, albeit by a few decimal points, but that disparity undersells how unprepared he generally looked out on the floor when wearing a San Antonio jersey.

In total, the rookie the Spurs nabbed with the 49th overall pick played just 145 minutes and looked, well, very much like a rookie 2nd round pick over that stretch. There’s still opportunity for him to become a viable rotation player, but it’ll take a good amount of work to get there.

Good choice? Yes. The logic here was that Gasol’s case for minutes (and for staying ahead of someone like Poeltl) had evolved into being more about on-the-floor impact than any raw numbers. In the 38-year-old’s tenure in San Antonio, his value wafted between offensive facilitator, sky-dancing rim-protector, floor spacer, and veteran voice, all of which collectively lost weight as time moved on. Once even that statistical case went by the wayside, it became pretty clear it was time for the Spurs to move on, even with him only part of the way through that $48 million deal.

Good choice? Yes, but it only scratches the surface. While White eclipsed this, thanks mostly to being lethal snaking under high screens and pulling up from the elbow, there are a number of stats that better underline the guard’s breakout season. He proved to be a great on-ball and help defender, a steady hand in managing the game and creating for others, and was terrific in the clutch.

Better stat: Combined blocks and steals per game (1.8). There are plenty to choose from here, but White’s game-changing defense should probably be the focus, and this number — best on the team — is a good place to start.

Good choice? No. It turns out, making shots off the catch was about the only above-average thing Cunningham was able to do in his first year in San Antonio, and it still wasn’t enough to keep defenses honest. After moving into the starting lineup and looking serviceable as a defender of big threes (he got the early LeBron assignments and Pop called him a tone setter), Cunningham’s value plummeted.

Cunningham had all the makings of a glue guy, but most lineups seemed to go undone with him. With the starters, better options emerged; with the reserves, he looked out of place being unable to benefit or contribute to a free-flowing system. He also ended the season with a 111 defensive rating, second only to end-of-year acquisition Donatas Motiejunas, who played all of 13 minutes as a Spur.

Good choice? Probably. Who knows. As much as fans were looking forward to a leap on the offensive end for the young guard, it’s the other side of the floor where his contributions were really missed this past season. Having another defensive playmaker on the perimeter to disrupt opponents would’ve been huge for a team that finished last in both the regular season and postseason in steals per game.

Good choice? Not quite.

As it happens when many Spurs Of A Certain Age, Mills trended towards that intangible realm a bit more this season, doing things both on and off the floor that helped the team jell and come together when things looked grim.

A move back to the bench and off the ball helped. Even with his minutes dropping from 25.7 in 2017-18 to 23.3, he improved his rebounds and assists per game and kept his scoring more or less the same. His three-point shooting also bounced back, up to 39.4%,

Better stat: Assist to turnover ratio (2.63). The 2nd-best mark of his career, and as good a sign of any — combined with his three-point shooting — of a return to a better role.

Good choice? I think so. For Gay, it was more about getting familiarity with the system and trust from his coach than anything — both seemed to occur in his second year in San Antonio, even with his move from full-time starter to super sub after the Rodeo Road Trip.

It’s hard to say what Pop exactly looks for in each player that gets past a particular threshold, but he seemed to get a bit more out of the versatile forward in 2018-19 to play him down the stretch of games. It didn’t hurt that he drastically improved his three-point percentage to a career-best 40.2%, or that he upped his defensive rebound rate from 17.5% to 20.9%.

Good choice? Yes. One of the more talented shooters in the league, especially at his size, Bertans’ value is tied to how often he’s shooting and what kind of a threat he poses there. He got better at attacking closeouts (something Pop often credited him for) and made 75.7% of his shots at the rim, but the impact still stemmed from the volume of looks from deep.

Good choice? Yes. Acquired as part of the Kawhi-DeMar deal, the 23-year-old Poeltl went from a potential DNP to system-shifting starter in 2019. How a young guy does that on a Pop team depends on the trust and cache he develops with his coach, and Poeltl did a great job of being both an effective low-usage player on offense and disciplined defender. The latter depended, in part, on him addressing one of his bugaboos earlier in his career, a high foul rate, which went fundamentally against how the Spurs have played defense since time immemorial. Poeltl did well there, and proved to be a great fit on the team in the process.

Good choice? Not really. My preseason assumption was that the two-man game between Aldridge and DeRozan would lead to more pick-and-pops and less post-ups. While that appeared to be the case earlier in the season (he led the team with 3.9 catch-and-shoot attempts per game in the first month), he only averaged 2.9 catch-and-shoot attempts after Thanksgiving, when his offensive turnaround occurred. Simply put, Aldridge was great from all over, and seemed to build on the previous year when he earned All-NBA 2nd Team honors.

Good choice? Sure. DeRozan’s fit in the Spurs’ system was best exemplified by his transition into primary creator and catalyst for a team that lacked a true point guard (sorry, Derrick). He was responsible for many of the team’s open three-point looks when on the floor, and used his bag of anti-analytics moves as a Plan B if he was unable to find the open man, rather than seeking those turnarounds and contested pull-ups immediately.

DeRozan isn’t without his warts, and the team didn’t thrive when he was on the floor. But he assumed the dual role of go-to scorer and creator on a new NBA team, and that bodes well for where he and the organization go from here.

The most important numbers for every Spur: End-of-season edition
Source: Pounding The Rock