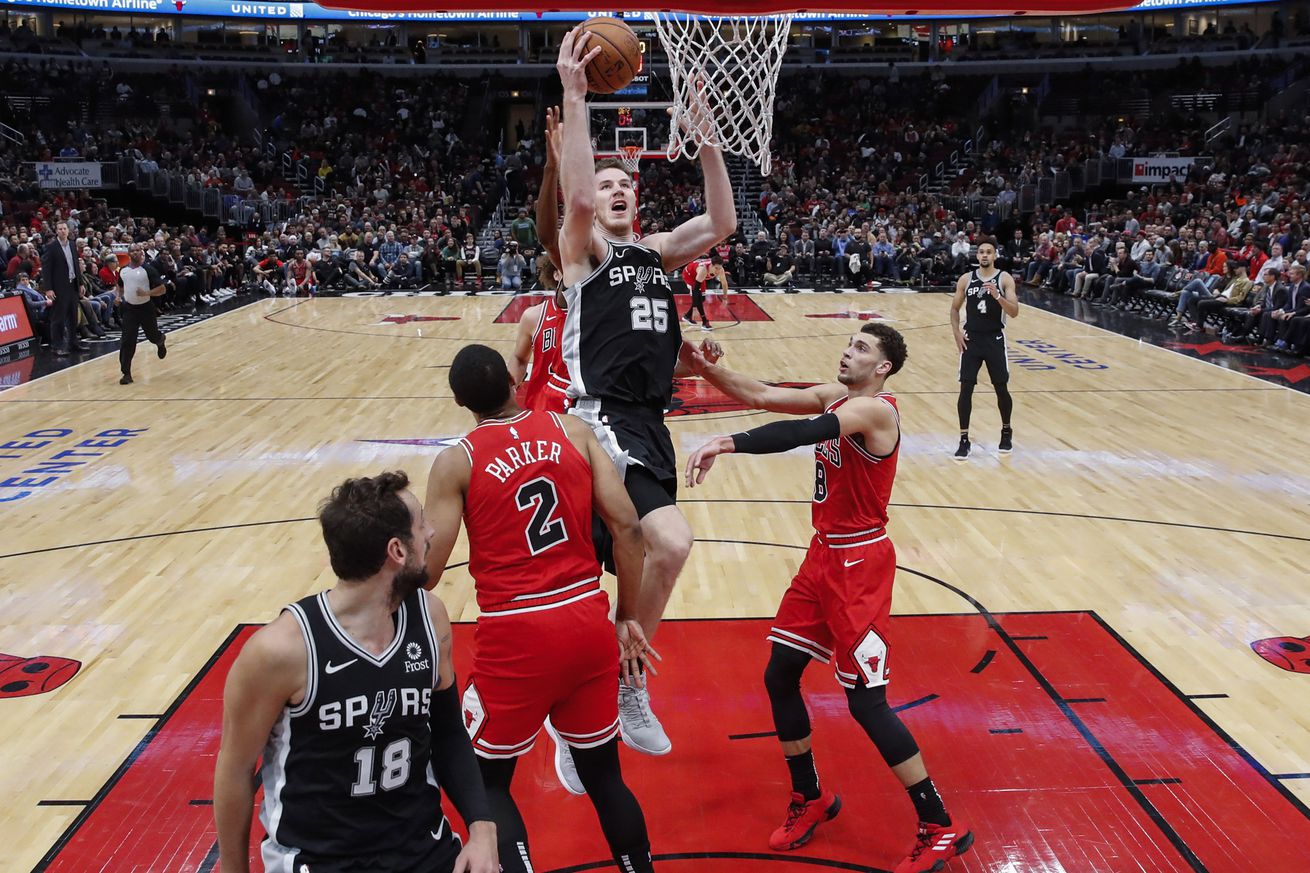 The Spurs came out disinterested and disengaged, and kept that same energy the whole game. The bench mob provided a bit more pep, but had little to offer in the way of execution. At times, it seemed like they didn’t even really want the ball.

In order, that’s a) Derrick White and Rudy Gay miscommunicating on a 15 foot pass off a baseline out of bounds play, b) nobody warning DeMar DeRozan and LaMarcus Aldridge about help defenders coming for a steal, and c) Bryn Forbes throwing the ball to no one in particular because no one was open on the last play of the game.

(As an aside, how about throwing the ball deep for Rudy Gay, once Ryan Arcidiacono switches onto him? LaMarcus flashes up towards the ball, drawing the Bulls last defender away from the hoop. There’s a very good chance Rudy makes an easy catch on a ball thrown to the far side of the court on the other side of the half court at that point. Even if he doesn’t, the ball would be much farther from the hoop. If Rudy could even tip it up in the air, time would be on the Spurs’ side.)

But even when they did something right, or at least didn’t do anything wrong, the ball still wouldn’t bounce in their favor.

Patty Mills digs for the steal at the perfect time. Robin Lopez is working baseline and has no idea he’s coming. Patty rips the ball away without fouling… and it goes right between his legs and out of bounds.

Bryn Forbes inbounds the ball to LaMarcus and takes the handoff as he comes over the screen. Unfortunately, he also takes an unintended shot to a very sensitive area, causing him to very understandably lose focus, jump up and down a little, then dribble the ball off his foot and out of bounds.

Not all of their mistakes led to turnovers, though. Sometimes they managed to turn their mistakes into an advantage, like an absurdist interpretation of the beautiful game.

Derrick and Jakob Poeltl are running a pick and roll on the right side with the strong side corner empty, and Derrick is able to get past Robin Lopez on the baseline. Justin Holiday helps off Davis Bertans to stop penetration and leaves Arcidiacono on the weak side guarding both Davis and Patty Mills. Davis is moving up to the towards the top of the key to create separation between him and Patty, but Derrick throws the pass way behind him. Davis just barely gets a paw on it with his left hand while falling down, then tips it to Patty with his right.

This is the Spurs’ Motion Offense at its worst. Their Motion Ugh-fense, if you will. The ball swings around the top of the key before Marco reverses it to Derrick cutting over a Davis pick just above the free throw line. This pass, too, is way behind it’s intended recipient, and Derrick has to stop and recover back to the three point line to regain possession.

Marco likely expected Derrick to catch and shoot from behind Davis’ screen, but Derrick obviously had other ideas. His next move is to pass to Davis on the left wing, who dribbles directly into the defense before trying to toss the ball to Jakob Poeltl, who is right next to him. Robin Lopez deflects the pass, but Jakob gets the ball back and heads straight towards Derrick for a handoff. Somehow, this works.

Derrick hesitates briefly before accelerating to the rim for an open layup.

Justin Holiday falls down while trying to navigate a screen from Jakob, which should leave Davis with an easy read: Patty on the cut or Jakob at the free throw line. But Davis fumbles the ball so he misses Patty, though he’s still able to get the ball to Jakob in the paint. Jakob throws the ball to the right person but in the wrong place. His slow bounce pass draws Patty back into a 14 footer instead of leading him out to the corner for a three.

Ugly wins are still wins, and winning games like this, when the team clearly isn’t on the same page, is important for a team still looking to find its way. But let’s hope for our sake and theirs that we don’t have too many more of these in our future.