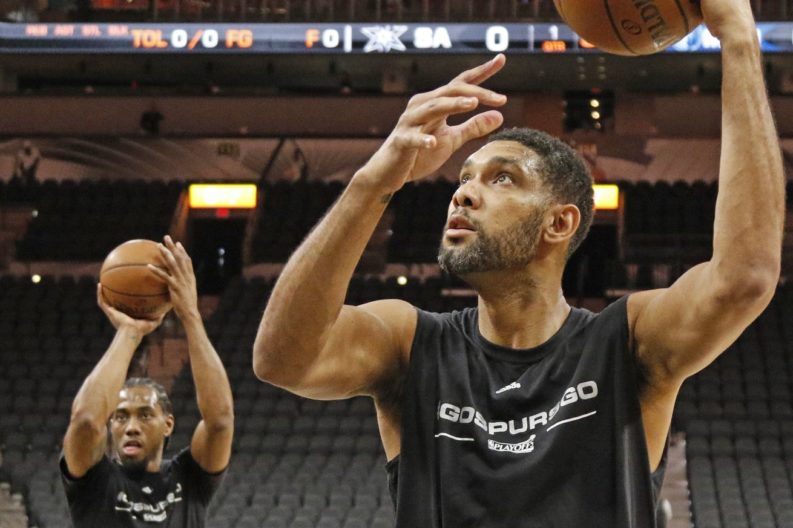 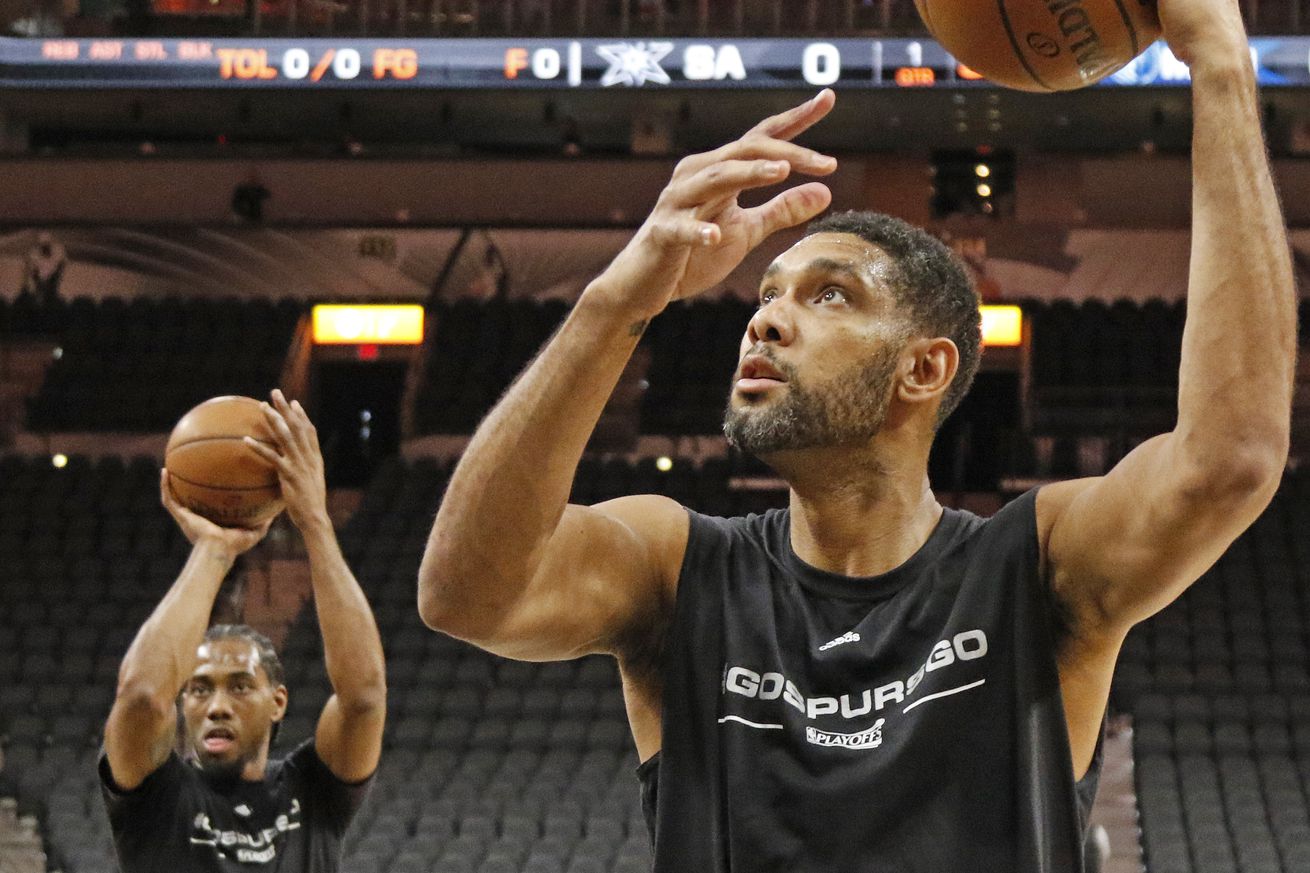 Sure, Pop celebrated the stoicism of both, but that’s where the similarities end.

Before even starting, let me assure you that this is very likely the last thing I’ll write about Kawhi Leonard for a while. I really don’t want Kawhi drama to be my beat. But sometimes, an interesting discussion can sprout from a tired subject. So here we are again.

The great Tom Ziller recently used the intro to his newsletter to address the whole “was Kawhi a leader?” controversy. You should absolutely read it. It will take a minute, since it’s not long.

In it, Ziller says it’s strange that Gregg Popovich is downplaying the impact of Kawhi’s leadership, since his style was similar to Tim Duncan’s, the player Leonard was molded to be like. Both were quiet, lead-by-example types. Now Pop seems to be retroactively negating the validity of that style, pioneered by Duncan and previously celebrated by Pop himself, largely because of the disappointment he felt by how Leonard left. The argument goes like this: by saying that Kawhi wasn’t a leader, Pop is implying Timmy wasn’t one either.

It’s at least a superficially suitable interpretation of events. The comparison between Leonard and Duncan is almost inevitable simply by the fact that they were drafted by the same franchise and were the quietest superstars of their generation. The Spurs also, if not actively pushed, at least didn’t resist the narrative that Kawhi was the next Timmy — not only as franchise centerpiece but as cultural touchstone. In any discussion with the media, Pop could alternatively say that Duncan didn’t talk to him anymore and that he has to interpret Kawhi’s facial gestures in order to communicate with him. It’s natural to make the connection between the two in good faith and imply that by impugning Leonard, Pop is inadvertently criticizing the “Duncan model.”

The problem is that while it’s true that both Kawhi and Tim were taciturn with the media, Duncan’s behavior in the locker room, and on the sidelines, was by all accounts entirely different than Leonard’s. That’s what made him a leader in Pop’s eyes as much as anything else, and that’s what separates Duncan and Leonard.

There are plenty of testimonies about how demonstratively supportive Duncan was as a teammate. We know that he always offered Tony Parker encouragement when Pop would go off on his young point guard back when Tony wasn’t an established star. We know that after a bad performance by Manu Ginobili in the playoffs, Duncan called him incessantly until Manu answered his phone to invite him to dinner and take his mind off the costly mistake he had made. We know because the other two members of the Big Three went out of their way to point it out so that people could know that Timmy was not only a stoic leader but an empathetic one too.

Duncan wasn’t only caring when it came to fellow stars. He comforted 15th man Jeff Ayres after he had a bad performance in garbage time in his native Arizona. He so effusively tried to congratulate Aron Baynes one time that he actually hurt him. As Michael Erler reminded me today, Tim once took the time to detail a play call with Shannon Brown, a player that was on a 10-day contract, during garbage time. There have been plenty of reports about him staying late to rebound for teammates of play defense against them in practice. His paintball gatherings are also legendary. I’m sure I’m forgetting other known instances of Duncan going out of his way to help lesser teammates.

Duncan wasn’t the Spurs’ leader just because he’d take it when Pop yelled at him and because he was arguably the best player of his generation. That surely played a part in why he helped establish a winning culture, but it’s not the whole reason. The fact that he was so amazing at basketball and immune to being affected by criticism but recognized that others weren’t and needed support were likely even bigger factors. Kawhi has mastered the skills necessary to be an amazing player, and he clearly can match Tim’s stoicism and aversion to the spotlight, but there’s zero evidence that he has figured out the rest yet.

Which doesn’t mean he never will. Duncan wasn’t a leader early in his career. The Spurs had veterans like David Robinson, Sean Elliott and Avery Johnson occupying those roles when Tim entered the league, just like Kawhi had the Big Three. Only when those guys left did Duncan embrace the responsibility to lead. Had Leonard remained with the Spurs, this would have been the season in which he would have been thrust into that role, and he might have developed the right qualities to fulfill it. Maybe he gets there in Toronto or wherever he lands next. Pop himself left the door open for it, saying that his leadership skills might “come as he progresses.”

Up until this point, Kawhi has not embraced that aspect of leadership. It’s not surprising, then, that Pop pointed to Ginobili and Patty Mills as the leaders of the team instead of naming Leonard. Manu was not only vocal on the court but organized team outings on the road and helped international players get acclimated, while Patty is a favorite among teammates due to his unstintingly positive attitude. They bring the group together and help others in the locker room navigate tough situations, just like Duncan did. Those qualities appear to be more essential to Pop in leaders than the stoicism that he so often celebrated in public.

Pop is not rewriting history by changing the qualities he’s always loved in leaders to take a shot at Kawhi. It’s not contradictory to exult Tim Duncan’s leadership style while criticizing Leonard, because they were in fact very different. Yet Pop does share the blame for any confusion because he only highlighted one aspect of Duncan’s character over all others and it’s the one that he has in common with Leonard.

The fact that someone can’t tell how different Duncan and Leonard really were at a distance shows that the Spurs might have done Duncan a disservice by not highlighting how special he was behind closed doors. If anything good is going to come from the Leonard drama, it might be that the comparisons between Kawhi and Tim will finally shed a light on how unique and inimitable a person Big Fun was behind his often inscrutable exterior.