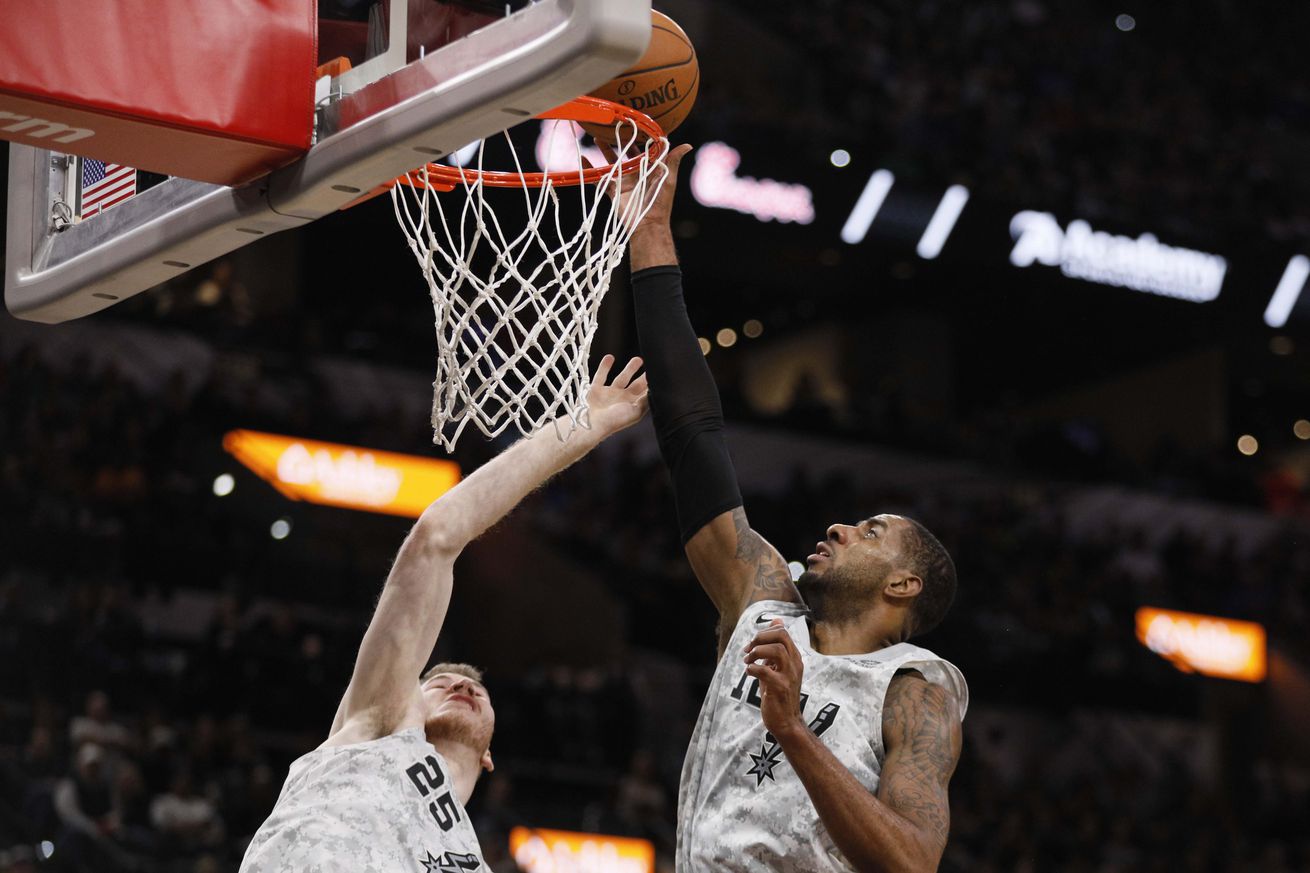 After a dismal Rodeo Road Trip, a return to the AT&T Center saw the Spurs regain their focus.

The final game of the Rodeo Road Trip against a surging, young Brooklyn Nets team displayed many of the problems the Spurs faced in this year’s iteration of the annual banishment from the confines of home. Poor defense, struggling offense, turnovers, and overall sloppy play led to a 16 point loss to the Sean Marks GM’ed squad. But hope was within sight. The guys in Silver and Black were looking forward to returning home (even if it might still smell of bovine leftovers). The homecoming meant sleeping in their own beds, spending time with family, and a chance to re-focus for the final push to the playoffs. That final push began with two strong home wins against the Detroit Pistons and the Oklahoma City Thunder.

Week 20 – Nothing’s better than home cooking: The game in Brooklyn seemed like a recurring nightmare – the Spurs got behind early, mounted a plucky comeback, only to fall short. But the nightmare road trip was over. Now to return home and try to pull together to make this the 22nd year the Spurs make it to the playoffs. The first opponent in their 3 game homestand was Detroit. For this game, the good guys found their defense, holding the Pistons to below 100 (hasn’t happened since January 5). Then the OKC Thunder came to town, albeit without Paul George. But this time, the Spurs held onto their defense and incorporated some stronger offense (and now have top 5 home record) to beat the Thunder.

Once again, the Spurs have shown signs of life after sinking to historic lows. San Antonio has never had a worse Rodeo Trip than the one the 1-7 odyssey the Spurs just wrapped up, which included five double-digit losses. But the Spurs bounced back immediately by beating the Pistons and Thunder at home, holding on to one of the West’s last playoff spots.

Earl Weaver said that, in baseball, “Momentum is the next day’s starting pitcher.” For the Spurs, momentum is apparently the next game’s location. After a brutal 1-7 rodeo trip in which they allowed their opponents to score more than 122 points per 100 possessions, the Spurs returned home and held the Pistons and Thunder under a point per possession to hold onto playoff position in the West. They’ve won six straight games at the AT&T Center, where they have a top-10 defense (106.6 points allowed per 100 possessions) and where they’ll play six of their next eight. They’re also 22-10 in games in which Derrick White (who missed six of the eight games on the trip) has played at least 25 minutes, though that breaks down to 17-3 at home and 5-7 on the road.

For the first time in his career, Rudy Gay is going to shoot above 40% from three. His scoring has gone up about three points from last season, moving in concert with the three-point percentage that rose more than 10 points. And although he didn’t make any triples in the Spurs’ Wednesday win over the Pistons, he had a pair in their 14-point victory over the Thunder on Sunday. And to think, people thought Gay, DeMar DeRozan and LaMarcus Aldridge would shoot too many mid-range jumpers. Instead, they are at the heart of the league’s seventh-best offense.

Preseason projected win total: 42.7. Currently on pace for: 44.8. Difference: +2.1. They’ve done it in a completely un-Popovich-ian way, with a defense that’s ranked 23rd in the NBA — the worst for the Spurs in more than two decades. But here they are at the end of the season, right in the mix. Death, taxes, Popovich. Would have loved to see this team with a healthy Dejounte Murray.

So, with six weeks left in the season, do the Spurs have enough left in the tank to make the push to the playoffs? Do you agree with the analysts, Pounders? Let us know in the comments.