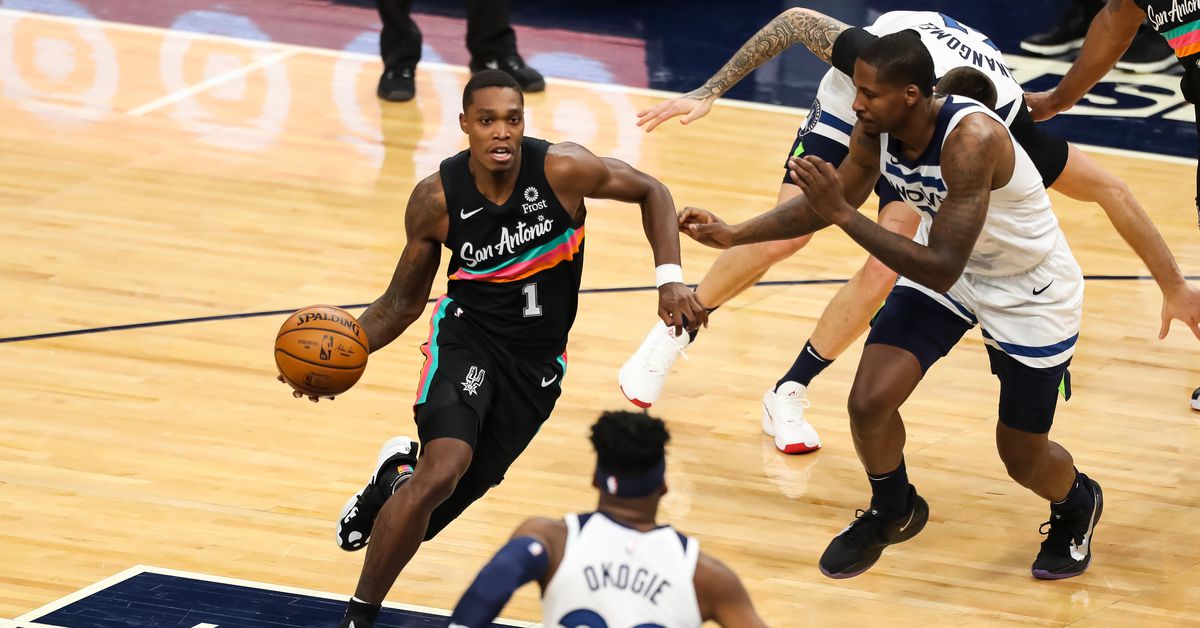 The Spurs’ win streak ended at three in Minnesota, as the Timberwolves closed the game better to escape with a much-needed 96-88 victory after seven consecutive losses. Lonnie Walker IV led San Antonio with 25 points while D’Angelo Russell had 27 in the winning effort.

What do you get when you put two teams on the second game of a back-to-back against each other, while neither has their best offensive weapon available? A chaotic, ugly but at times surprisingly fun game. No DeMar DeRozan (out for personal reasons) or Karl-Anthony Towns (still nursing a wrist injury) meant both the Spurs and Timberwolves were going to be forced to find scoring elsewhere. Lonnie Walker IV answered the call for San Antonio in the first half, playing as aggressively as he ever has to carry the offense. Minnesota’s scoring was only a little more diversified, as Malik Beasley and D’Angelo Russell matched Walker IV’s 22 first half points between the two.

The individual exploits were entertaining enough to distract from the rest of the game, which was predictably sloppy early and saw both teams get into mini droughts. It was a low scoring affair despite some offensive explosions because neither offense could execute consistently and without stars to bail them out, both the Timberwolves and the Spurs simply lacked the weapons to put points on the board despite bad defensive efforts from both sides.

The small lead San Antonio carried into the break immediately disappeared in the third quarter. Turnovers and a more normal performance from Walker IV, combined with some continued scoring from Russell and Beasley, allowed the Wolves to get back in it. Likely knowing that Lonnie was not going to continue to score like a superstar, Gregg Popovich decided instead to run the offense through LaMarcus Aldridge, with some success. Unfortunately Aldridge punishing Naz Reid inside for a while wasn’t enough to truly create separation, as essentially both teams mostly traded buckets and defensive mistakes the rest of the way. Still, the Spurs were ahead going into the final frame.

A beautifully executed set play to start the fourth quarter that resulted in a Patty Mills three-pointer put San Antonio up by six and seemed to foreshadow a stretch in which the better coached team would pull away. Alas, after the the first couple of minutes, the Wolves started to chip away at a deficit that reached nine at its apex, forcing a close ending. The absence of DeMar DeRozan became imposible to hide in those last few minutes for the Spurs, as Lonnie Walker IV never heated up again before leaving the court with a cramp and both Aldridge and Mills failed to get enough important buckets when needed most. Minnesota played just a little but better in those final moments and that was enough to secure the win.

Next game: @ Thunder on Tuesday

The Spurs will end a five-game road trip with a visit to Oklahoma City. The Thunder are young, but they have nice pieces and beat the Nets on Sunday. If DeRozan is out, which seems likely, it could be a tough out.