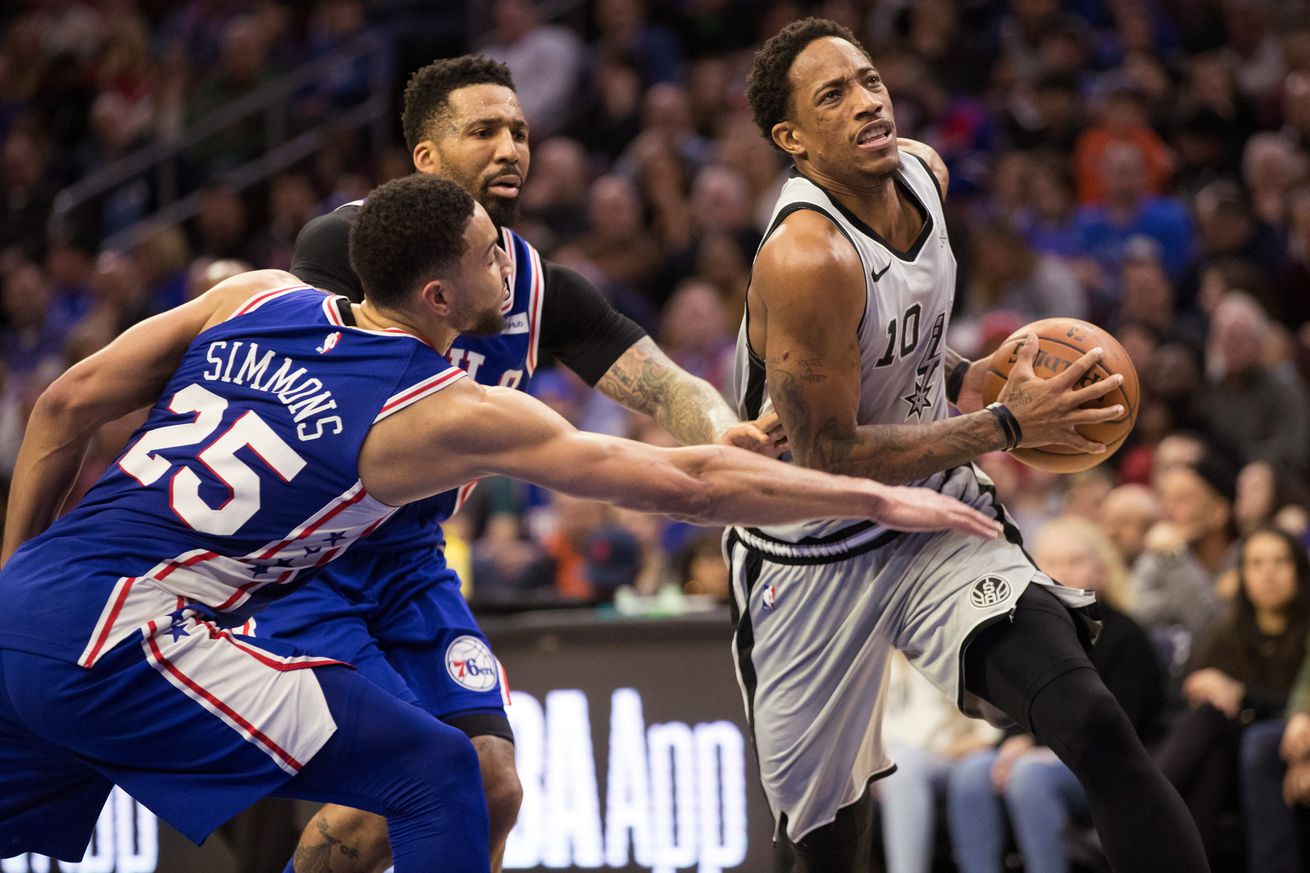 The Spurs made several costly mistakes late that prevented them from escaping Philadelphia with a win.

The Spurs seemed poised to beat the 76ers on the road after having secured an eight-point lead with under three minutes to go. They hadn’t played well, especially on defense, but no one was going to dwell too much on that if they actually secured the W, like they seem they would. And then it all fell apart.

Ben Simmons got loose in transition to cut the lead to six with 2:15 to go, then again to find Landry Shamet alone beyond the arc for a three that made it a one possession game. After the third empty offensive trip in a row for San Antonio, Marco Belinelli and Rudy Gay botched a switch and JJ Redick got free for a three-pointer while also being fouled by a desperate Gay.

That was it. Neither team would have another field goal for the rest of the game. After being on the wrong end of a 10-0 run — Corey Brewer scored a free throw — the Spurs dropped a game they had several opportunities to close against a shorthanded 76ers team, 122-120.

The loss itself is not terrible. The Sixers are good, even without Jimmy Butler, and the Spurs are not great on the road. The way they lost, however, is heartbreaking, especially after having stretches of good play.

The start of the game was disturbingly familiar, as the defense outside of LaMarcus Aldridge was soft and a little slow while the offense was mostly reactive, settling for the shots the opponent was conceding. We’ve seen that from the starters a lot recently. Fortunately we’ve also seen what can happen when the bench checks in. Despite missing Davis Bertans the subs came out firing and got the Spurs back in the game. Outside shots were key to keeping San Antonio’s offense going, as DeRozan shot well but couldn’t get his driving game going and the Sixers patrolled the paint well when others tried to penetrate. It wasn’t the most sustainable way to score, but putting points on the board didn’t prove to be an issue until the final minutes.

On the other end the Spurs seemed to have a plan. Neither team could actually prevent the other from scoring almost at will, but wearing down Embiid seemed like a good strategy against a Philadelphia team missing a star and boasting a shallow bench. While other Sixers got easy buckets, the Spurs made Joel work for every one of his, with Aldridge in particular doing a good enough job on him to keep him from going off early. There were signs that stratagem was working, too. At times in the third quarter the Sixers’ center showed signs of fatigue and tightness in his back, an ailment that almost kept him from playing. He still willed his team to tie the game to end the third quarter after the Spurs had secured a seven-point lead, but was clearly getting tired.

The game plan paid off in the fourth quarter. Embiid made his last bucket with just under seven minutes to go. In the ensuing minutes the Spurs took control of the game and seemed to have fresher legs to close it out. They turned to DeMar DeRozan, who had been scoring well for most of the game, to seal the win. He couldn’t. Then the mistakes started to pile on, leading to an unexpected collapse. Watching it all happen in real time was painful yet it also felt uncomfortably familiar. The timing of the errors was especially grating but their nature — poor execution on transition defense and switches, lazy passes and predictable offense — was all too recognizable. In the end the Spurs were done in by exactly the type of seemingly minor issues that have been bothering them again for a while now.

I’ll say it again: this is not a terrible loss if we zoom out. It was on the road and against a good team. I get that it’s probably the last thing any Spurs fan wants to hear right now. It’s understandable to be frustrated and even angry right now, because it’s never fun to see the Spurs beat themselves like they did on Wednesday. But as long as they bounce back, this game won’t probably matter in the long run.

Here’s hoping the Spurs figure things out going forward and we get to wash off the bad taste this loss left in our mouths with a decisive win on Saturday.

Up next: @Pelicans on Saturday

The Spurs will visit the Anthony Davis-less Pelicans. They should beat them if they go into New Orleans with the appropriate fear, as Pop likes to call it.