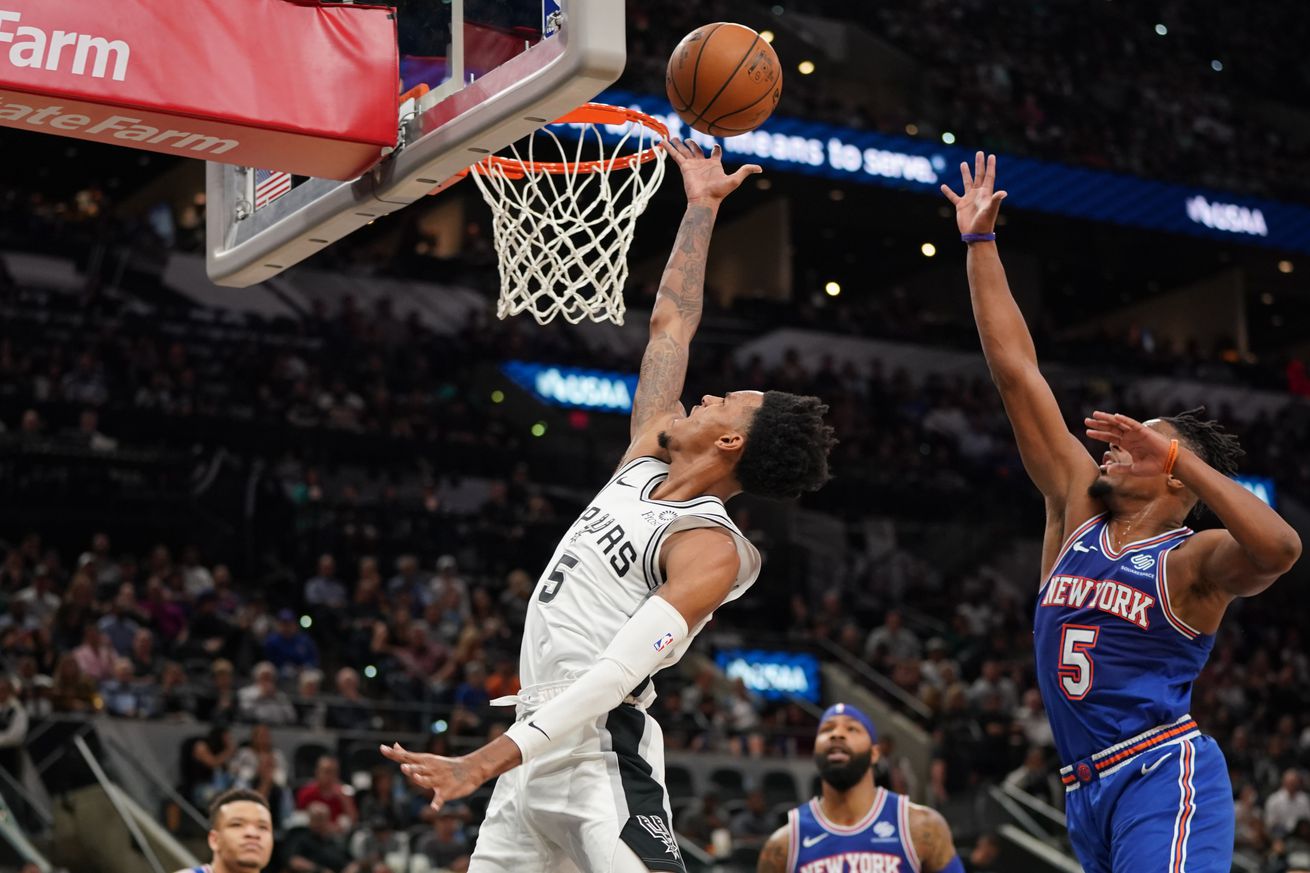 The Spurs had a really sloppy start to the season and almost handed a game to the Knicks with a plethora of turnovers, but they picked up their play and aggression in the fourth quarter, with Dejounte Murray leading them to a 120-111 victory in his first game back after missing an entire season with injury.

The Spurs started their preseason lineup of Trey Lyles, Bryn Forbes, Murray, DeRozan and Aldridge. Marcus Morris scored the first points of the game on an iso midrange jumper amidst a shower of boos. Dejounte Murray picked RJ Barrett’s pocket, leading to a Lyles fast break dunk as the Spurs went on a 10-0 run. The Spurs got a little sloppy in the middle of the quarter as they turned over the ball and the Knicks cashed them to get within a point midway through the quarter. Both teams weren’t sharp, but Poeltl’s play around the hoop got the Spurs to a 22-15 lead after one.

Murray showed why the Spurs gave him a big contract as the second quarter began, running the socks off of whoever was guarding him as the Spurs expanded their lead to as much as 16. The Knicks cut the lead to four as Morris, Julius Randle and RJ Barrett got hot for New York, and they took advantage of turnovers. Despite a sloppy finish the the quarter, the Spurs led 59-51 at the half.

The Knicks looked ready as they came out in the second half on a 11-2 run, taking the lead with RJ Barrett hitting shots and DeRozan missing everything. You could see the Spurs confidence draining away as the Knicks took advantage of their miscues to take a seven point lead with 3 minutes left in the quarter. But the Spurs reserves played harder for the remainder of the quarter, taking the lead on a Rudy Gay steal and basket with just a few seconds left, only to lose the lead on a Barrett layup as time expired in the third as the Knicks led 84-83.

Dejounte’s steal and a fast break and-one started off the fourth in the right way for the Spurs, but the Knicks came right back with a pair of Kevin Knox triples to retake the lead. DeRozan finally started to break out of his funk with a couple of baskets, and the Spurs regained the lead on a LaMarcus layup with just over half of the quarter left. Murray’s three-point shot pushed the lead for the Silver and Black to eight with five minutes left on the clock. They pushed the lead to as much as 14 before the Knicks made the end result a little more respectable in garbage time.

This is dedicated to someone special. (Side note: The Long Ryders have a new album out after 30 years and are touring again, hopefully they will come to a town near you.)

The Spurs have a few days off before they face the Washington Wizards Saturday night in the AT&T Center at 7:30 pm. The Wizards are missing John Wall for the season, but they still have Bradley Beal and could be dangerous if the Spurs don’t play up to their potential. The Spurs are 1-0 on the season, and they are tied for the lead in the Western Conference.