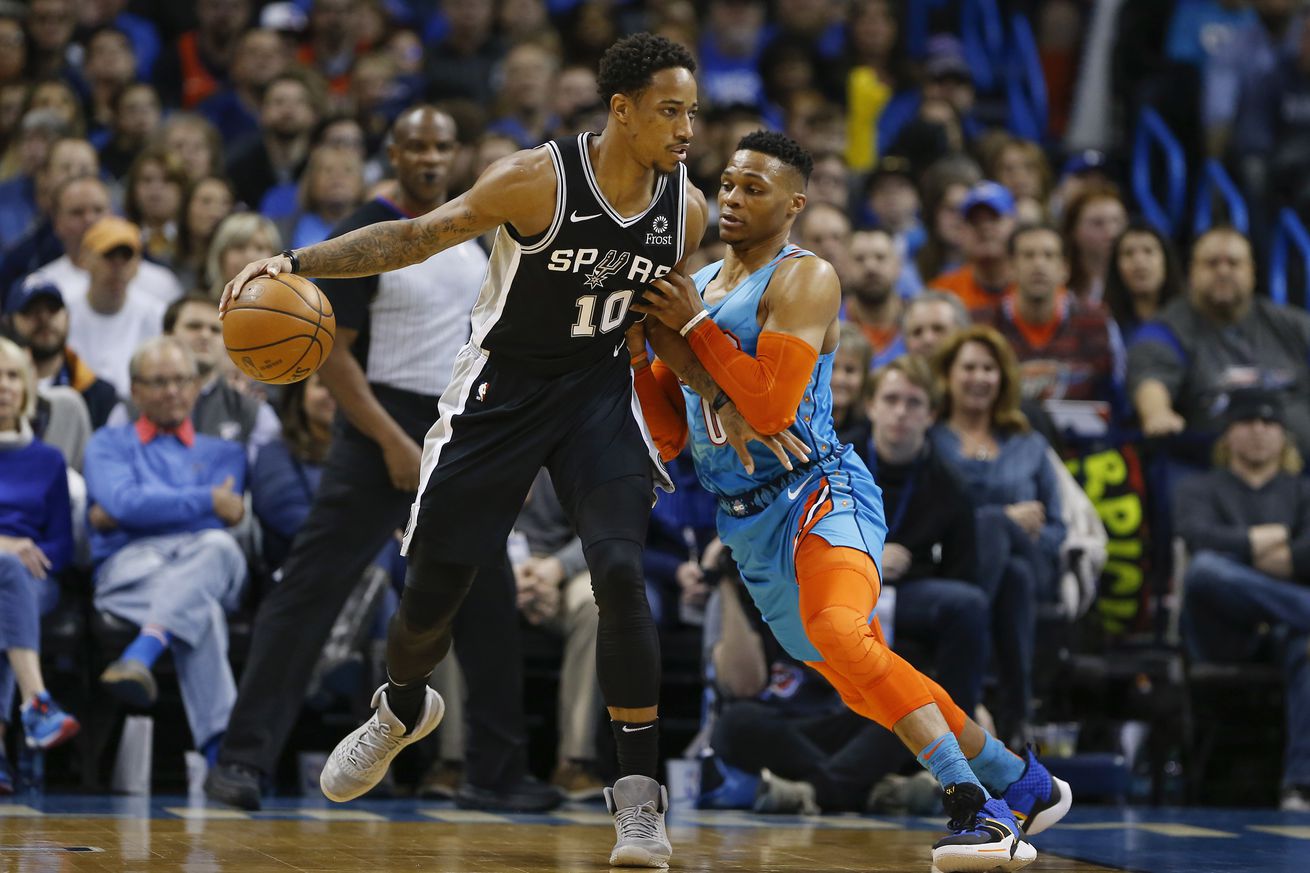 The Spurs looked out of sorts in the second half as the Thunder took over and won this one going away.

In a game with considerably less drama than Thursday’s classic, the Spurs played a strong first half, but faded in the third quarter and let the Thunder take over the game in the fourth as they won easily 122-112. The Spurs didn’t play hard enough or execute well enough to hold off a hot shooting and energetic Thunder squad that just looked to be the better team tonight.

The Thunder won the opening tip and went inside to Steven Adams who was fouled by Pau Gasol and hit a free throw to put the Thunder up to start the game. Bryn Forbes and LaMarcus Aldridge combined to give the Spurs an early lead, but Paul George brought the Thunder back into it, and halfway through the quarter, a pair of free throws from Russell Westbrook tied up the game at 10 each. The Spurs started hitting from deep with Marco Belinelli and Davis Bertans doing most of the damage. The Thunder got plenty of free throws to keep the game within range, but the Spurs led 31-23 after one quarter.

Abdel Nader propelled the Thunder on a mini-run to start the second quarter, but the Spurs came right back with Jakob Poeltl and Patty Mills making key plays. The Spurs bench eventually stretched the lead to 13, but after Patrick Patterson hit triple to cut the Spurs lead to 10, Coach Popovich called timeout with the Spurs up 50-40. They continued to get the open corner three point looks and Terrance Ferguson and Jerami Grant hit them. The Spurs made enough stops and hit enough shots to keep a significant lead, and led 60-51 at the half.

The Thunder scored the first of the second half with Russell Westbrook stealing the ball from Derrick White and taking it to the basket for an easy hoop. The Spurs went on a 3 minute scoring drought as their lead shrank to just two points. LaMarcus Aldridge scored a basket, but the Thunder got hot from outside, and they took the lead on a three pointer from Paul George as the Thunder outscored the Silver and Black 13-3 in the first part of the third quarter. The terrible third quarters of November were back, like a Gordon Lightfoot lyric that keeps running through your head even when you want it gone. The Spurs got sloppy with turnovers and missing easy shots but somehow they evened the score at 68 each with five minutes left in the third, and they eventually retook the lead when Forbes finally hit a three point shot. Dennis Schroeder and Nader took over for OKC as they retook the lead and led 86-80 after three, outscoring the Spurs 35-20 in the quarter.

Nader opened the scoring in the final quarter for the Thunder with a pair of free throws, but DeMar fired back with a floater in the lane plus a free throw to cut the lead to five. After Schroeder extended the OKC lead to 9 with a layup in the lane, Pop called a timeout. To no avail, as Schroeder continued to hit everything he looked and the Thunder extended their lead to double digits. Marco Belinelli was the only player on the Spurs hitting his shots, and he almost single-handedly kept them in the game hitting clutch three pointers but the Thunder led 108-98 halfway through the final quarter. Derrick White rarely makes mistakes, but his poor pass led to another Schroeder steal and a fast break basket for the trailing Westbrook as the Thunder led by a dozen with five minutes left in the game. The Thunder eventually extended the run to eight straight as they led by 16 with four minutes left, and Pop waved the white flag and put in the garbage time unit with Drew Eubanks and Quincy Pondexter. The bench guys provided good effort and made the final result look a little more respectable that it probably was as the Spurs lost 122-112.

You will be soft rocked, by me.

San Antonio is now 25-19 and in 7th place in the west, still in the playoff hunt. The Spurs don’t play again until Monday, 7:30 PM at the AT&T Center against Tony Parker and the Charlotte Hornets. This will be Tony’s first game in San Antonio wearing a different team’s jersey, and the wee Frenchman is sure to drop a baguette of two on an unsuspecting Spurs defender in the paint. Kemba Walker is having a great year, and it’s going to be fun seeing him in San Antonio. Go Spurs Go, and I’ll see you on Monday night.