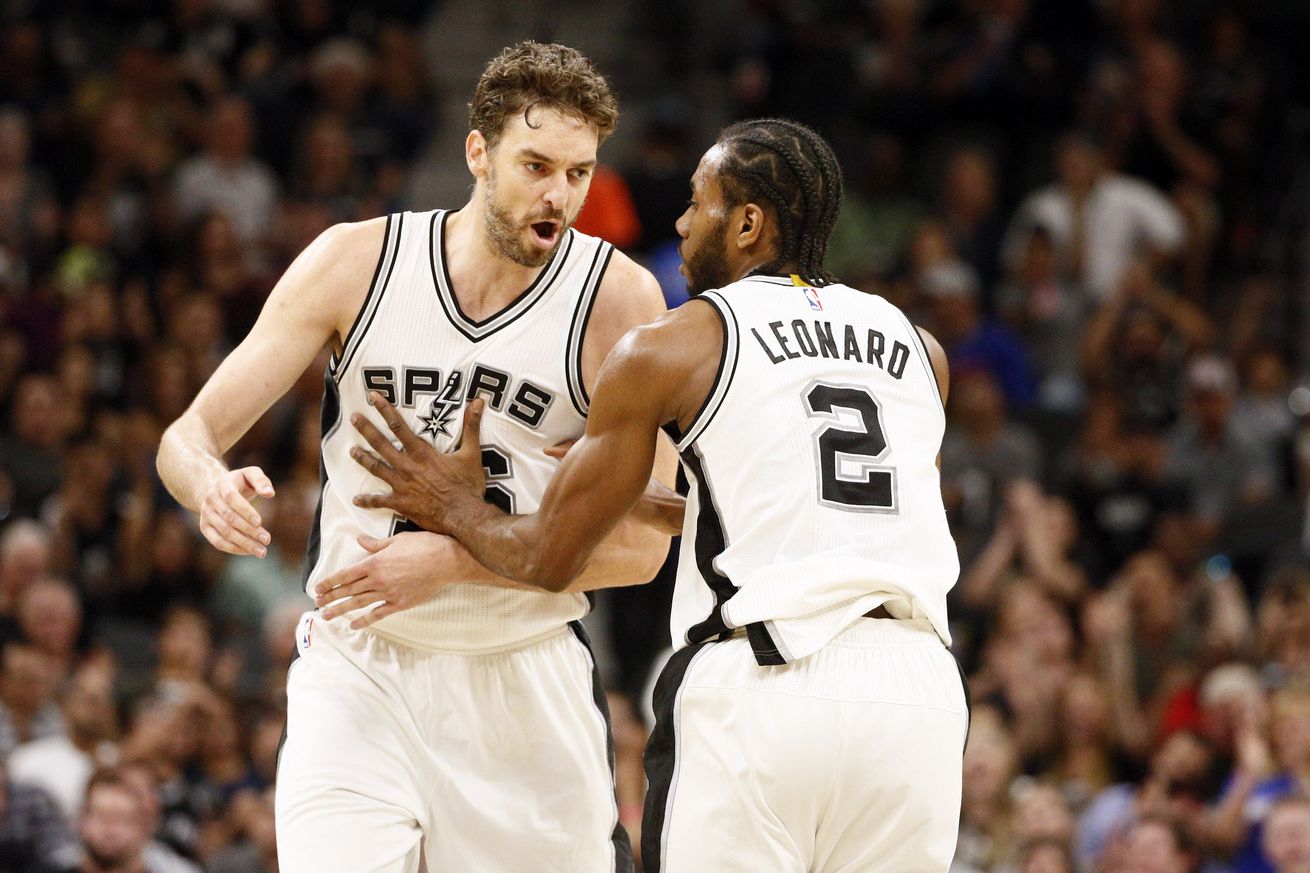 Pau Gasol surprised everyone by opting out of the last year of his contract with the Spurs, as reported by The Vertical’s Adrian Wojnarowski. He’s not going anywhere, though. Pau will re-sign for more money over more years, essentially allowing San Antonio to restructure his deal to lessen the cap hit in this offseason.

My immediate reaction to the news was probably similar to most Spurs’ fans. I quickly started to think of the cap space it would generate and how it could help the front office land a big free agent. If not Chris Paul, then at least George Hill or Paul Millsap.

But after taking a closer look at the numbers, I believe I had it wrong. Gasol opting out and re-signing for less is in all likelihood the first step towards San Antonio running it back and keeping last year’s team together. Let me explain.

Pau’s cap hold is huge and is not going anywhere

Since Pau opted out, the first instinct is to consider his contract to be off the books, but that’s not how it works. His $16,197,500 contract won’t count against the cap, but his $18,600,000 million cap hold will. Until he’s signed, the Spurs will actually have more money committed now that Pau has opted out.

Now, Manu Ginobili also has a huge cap hold, but it’s easier to actually get rid of it. He might still retire, which would solve things. He might also be fine with being renounced and signing for the room exception worth around $9 million over two years. Pau, on the other hand, is not opting out to get paid that little when he had a guaranteed $16 million left on his deal.

Now, once Pau is signed, the Spurs actually could have some more cap space. But likely not much more. Our old pal Richard Jefferson got $39 million over four years to opt out of a $15 million deal. Pau is older, so he’s not going to get such a long contract. Still, this is likely going to be his last big payday and he’s opting out to secure more money, not just to help the Spurs. So let’s say he gets a two-year, $22 million deal.

That contract would start at roughly $11 million in year one, which would save the Spurs just $5 million. That’s not enough to make a big free agent splash. So why go through with it? To answer that, we first need to take a look at the team’s other free agents.

Mills and Simmons are due for a big raise

Patty Mills and Jonathon Simmons earned big raises, but it’s impossible to know how big yet. The best way to figure that out seems to be to look at how much similar players have gotten in the open market.

Mills is an unrestricted free agent. He’s not a great playmaker, but he can handle the ball and is an excellent shooter. He’s a great bench guard but would also fit well in the starting lineup of a team that either has scorers who need the ball, or creators at other positions.

We’ve seen a player that fits those characteristics — Patty’s countryman Matthew Dellavedova — get a four-year, $38.4 million deal from the Bucks. The elite version of that type of player — George Hill — turned down an extension offer from the Jazz projected to pay him over $20 million a year. Let’s split the difference and say Mills makes $15 million a year on his new three-year contract.

As for Simmons, he’s an athletic bench scorer who can defend at an adequate level and has some passing ability. His shooting is not great, but it seems to be coming along. His ideal role might be sixth man, but he can probably be a decent starter on the right team.

Kent Bazemore got around $17 million a year with a similar skill set, though he had a longer track record of production. On the lower end of the scale, Gerald Henderson got $9 million a year from the 76ers. Splitting the difference, let’s Juice gets a $13 million-a-year offer from someone.

Since he’s an Early Bird free agent subjected to the Arenas provision, the first year of his salary is going to be around $8.5 million, the equivalent of the mid-level exception. His contract might become problematic in year three, but that’s a story for another article.

Bringing everyone back would make the Spurs’ roster expensive

Let’s use those estimates going forward and assume the Spurs actually want everyone back. Here’s how their cap sheet would look, without counting Manu:

In this scenario, the Spurs would be over the cap and would have the mid-level exception, worth $8.5 million. Adding that, they are at $117 million. The luxury tax sits at $121 million, so they would have around $4 million to offer Manu without getting past the tax level, assuming the ball park figures for Mills and Pau are correct. They could easily offer him more by stashing the first round pick or waving Forbes.

By reducing the cap hit from Gasol’s contract this season the Spurs are giving themselves a chance to essentially take another crack at the Warriors with the same team without going into luxury tax territory. If the reports that the Spurs believe they had a chance to beat Golden State this year are true, it makes sense for that to be the strategy.

The savings from Gasol are not significant enough to allow for a renovation, but they should be able help if their goal is to keep the team together while postponing the reloading phase to next offseason, when they will have more cap flexibility.

Reading the tea leaves is always hard when it comes to the Spurs. They might still make additional moves that point to a different strategy. Other teams might offer Mills a fortune, which would change the scenario. It’s too early to pin down what the front office is thinking and what the contingency plans are.

Right now, though, it seems that unless something crazy happens, this offseason might be more boring than yesterday’s news suggested.