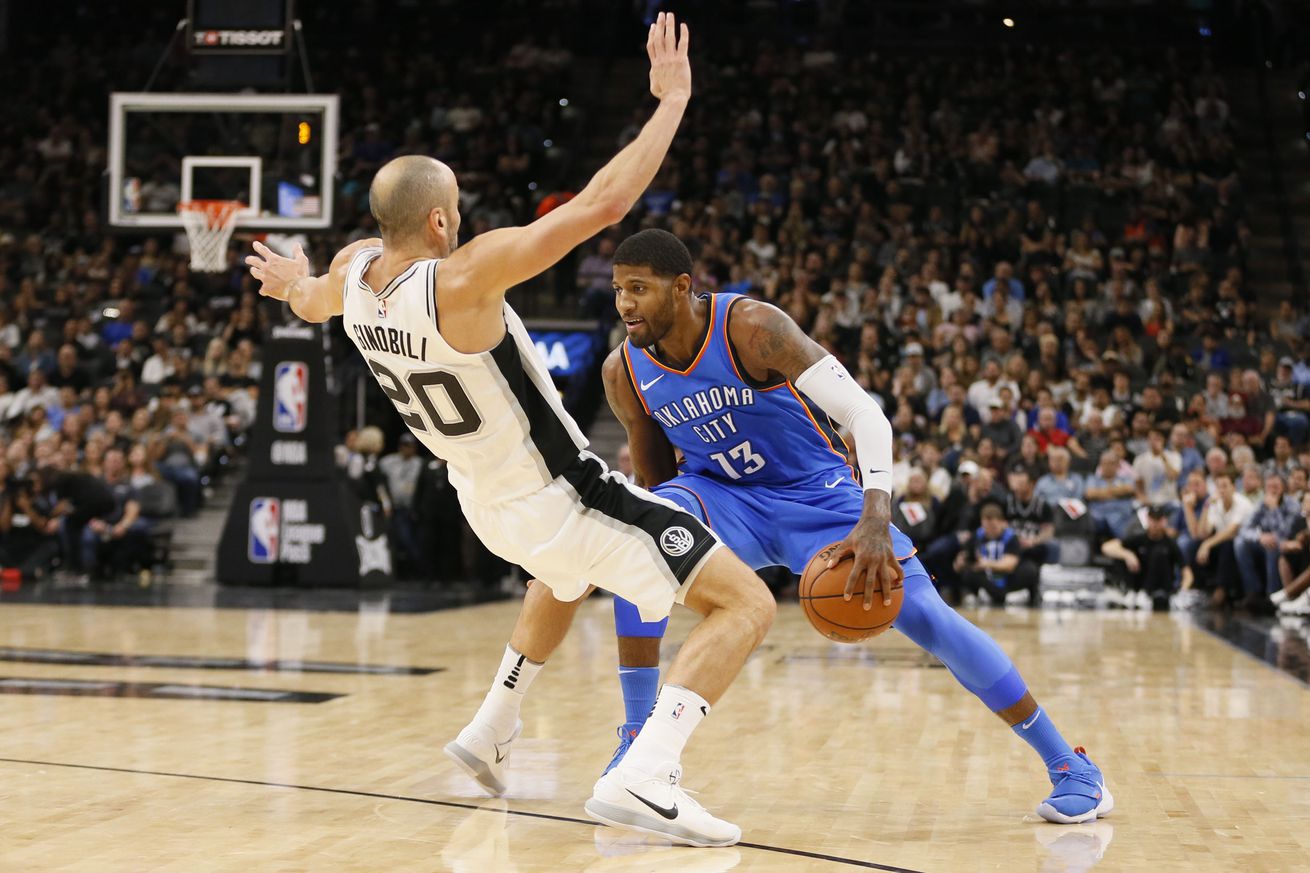 The Spurs looked like they’d be blown out early, but fought back and beat the star-laden Thunder.

The Spurs overcame a wretched first quarter to fight their way back from a 23-point deficit to the Thunder behind the solid play of LaMarcus Aldridge and Danny Green, with an assist from Manu Ginobili who started it all with a critical play at the end of the first period.

Danny Green stole the tip and made a quick layup to get the Spurs off to a quick start. But Spurs turnovers led to easy points for the Thunder as they built a 10-4 lead. The Spurs cut the lead to 1, but then they fell apart as the Thunder went on an 18-0 run, finally staunched by a Rudy Gay layup. Manu Ginobili’s competitive nature never quits, and he drew a charge on Carmelo Anthony to prevent them from scoring the final points of the quarter. The Thunder led 32-15 after a quarter.

The second quarter started with more of the same as the Thunder dominated and stretched their lead to 23. Halfway through the quarter, a 10-0 scoring run from the Spurs brought a little life back to the restless home crowd. The Thunder struck back, but the Silver and Black had found their aggressiveness again with Kyle Anderson and Danny Green leading another 9-0 run for the good guys. The second quarter ended with the Spurs down 55-48, outscoring the Thunder by 10 in the period.

The Spurs started up the third by cutting the lead to 5, but the Thunder went on a little run led by Paul George to push the lead to 12. But Danny’s defense and shooting brought them back as the Thunder shooting went cold. Davis Bertans contributed a triumvirate of triples to tie it up at 78 late, and that’s how the quarter ended. The Spurs had fought all the way back into the game.

Manu scored the first points of the final quarter with a deep three, and an and-one from Rudy Gay gave the Spurs a six point lead early. The Thunder fought back, and they tied the game at 91 halfway through the quarter with an and-one from Westbrook, who finally hit a shot. The Spurs defense stiffened and Aldridge was unstoppable as the Spurs regained a six point lead with 3 minutes left. But Carmelo baited Bertans into a foul and hit a shot. The Thunder were able to put back the missed free throw and cut the lead to just 2. Kyle Anderson was hit on the play and the Spurs had to take a timeout. Again, Manu showed his resolve by outfighting Steven Adams for a tough rebound to get the ball back.

A miscue from Patty Mills after a steal from Danny gave the ball back to the Thunder and they took advantage, cutting the lead to just one point. Aldridge hit a putback off a Danny Green miss to put the Spurs up 3 with just 24 seconds left. The Thunder missed a series of shots in their final possession and they got a deep shot from Melo, but with his foot on the line to cut the deficit to one and only 5 seconds left. Pau Gasol hit a pair of free throws to put the Spurs up by three with 2.3 seconds left. Westbrook missed the final shot and the Spurs held on to win 104-101

The Atlanta Hawks, with former Spurs assistant Mike Budenholzer at the helm, come to the AT&T Center on Monday at 7:30 pm. I’ll see you in the game thread.