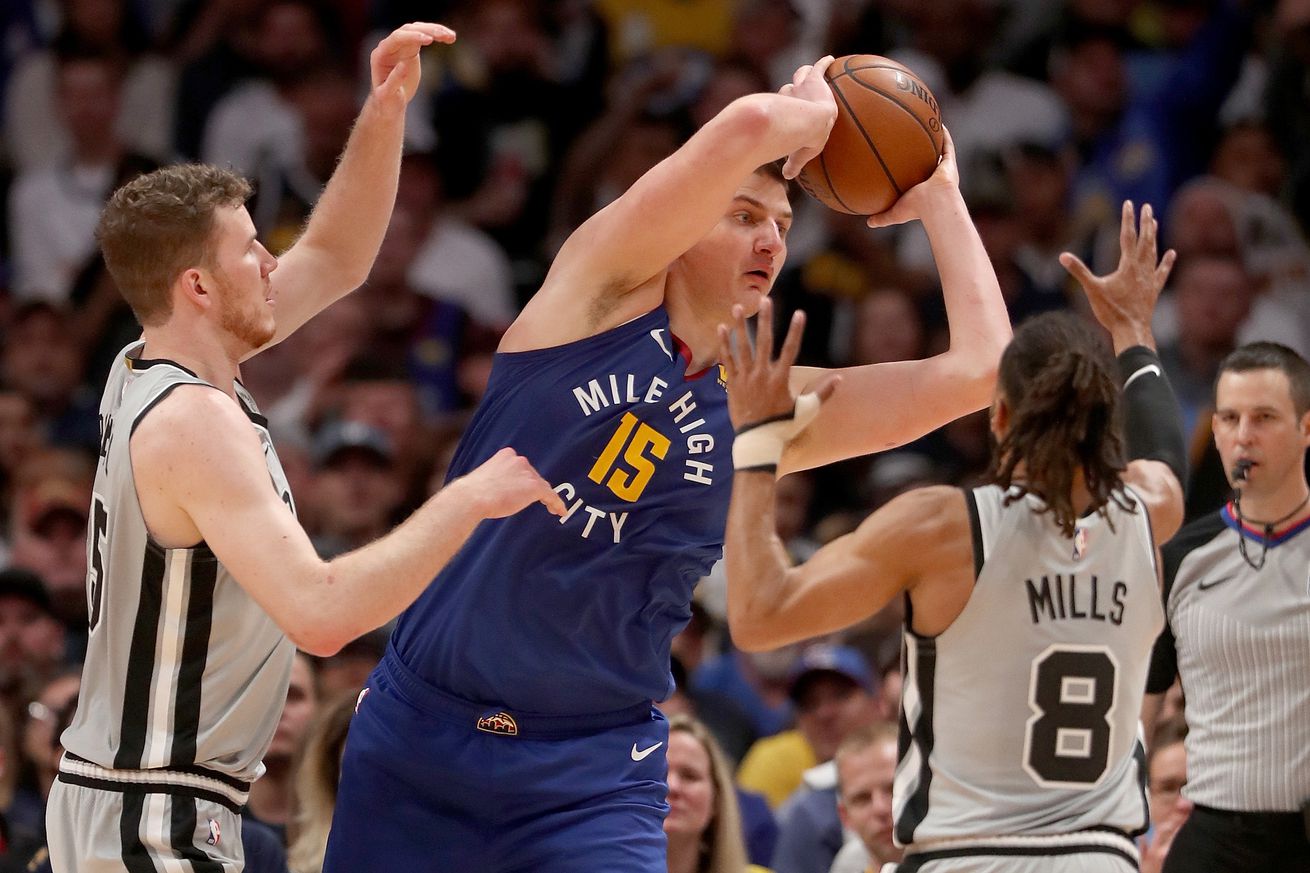 The Nuggets couldn’t miss from distance and the Spurs couldn’t make a layup.

Jakob Poeltl was pretty great in game five. And that concludes the positive portion of this article.

This series has been tough on me. The Spurs were on the verge of taking both road games to start the series, which would have made a sweep a real possibility. Yes, that’s right. A sweep. Seems hard to believe, but it’s true. Fast forward to game five and the Spurs are on the verge of being eliminated and look absolutely dejected. What’s been so tough is I never felt the Spurs were overachieving in the first seven quarters of the series, so such a major shift in momentum has been difficult to grasp.

The series isn’t over yet – it’s first to four wins and the Nuggets only have three – but even the most optimistic of Spurs fans must be finding it difficult to find any rational reason to believe the Spurs can win the next two games of the series. It’s dangerous to question the desire of the team – one can never know what’s going on inside another person’s head – but from the outside looking in, it sure seems as though the Spurs have been lacking any semblance of a spark. Not sure if it comes down to leadership or what, but I wish the Spurs would at least go down swinging.

The Nuggets’ approach in this series has been to stay glued to the shooters, forcing the Spurs to beat them from inside. As I mentioned in my series preview article, I thought the Spurs’ offense was very difficult to defend because of their ability to score from all levels of the court. Here’s an excerpt from the article:

The Spurs’ struggles from distance in this series has been well documented by now. They struggled again in game five, making only 7 of their 24 looks, good for 29 percent. Their diversity in offensive scoring has been the only thing that has kept their offense afloat in the first four games of the series. The Spurs came into game five having made 66.7% of their 99 attempts inside the restricted area, good for the third highest percentage out of the 16 playoff teams. They had also made 50% of their 70 shots from the non-restricted paint area, which was 1st out of all the teams in the playoffs.

In game five, the Spurs attempted even more shots from the painted area than they had in the first four games of the series, which should have been a good thing. Unfortunately, it wasn’t. The Spurs shot 10-24 from inside the restricted area, which is a ridiculously low 41.7%. To put that number into perspective, an average of 41.7% this series would have put the Spurs dead last out of all 16 playoff teams by a margin of five percent. So yeah, it wasn’t pretty. To make matters worse, the Spurs only hit 45% of their 22 shots from inside the non-restricted paint area. Coach Pop mentioned this in his postgame interview:

The Spurs’ free throw shooting has also taken a huge dip in the playoffs. It’s a make or miss league, and if a team can’t hit from the outside, the inside, or shots that are considered free, they aren’t going to find success unless they have an elite defense. The Spurs’ defense is a lot of things, but elite is not one of those things. The Spurs are letting the middle-of-the-road offense of the Nuggets look like the second coming of the Golden State Warriors. It’s been painful to watch.

If I were to summarize game five in one play, it would be the play that ended the first half. Patty Mills found Aldridge rolling to the rim for what was a wide open layup. Making this layup would have cut the Spurs’ deficit down to single-digits heading into the second half. Aldridge missed the bunny, and Mills tilted his head up towards the rafters with a look of “how has it come to this?”

Well it has come to this. The Spurs must win game six in San Antonio on Thursday to take the series to a winner-take-all game seven in Denver on Saturday. Damian Lillard did the Spurs a favor from a scheduling standpoint by going nuclear against the Oklahoma City Thunder in game five of their series. His game winning three pointer from well beyond 30 feet closed out the series. The Portland Trail Blazers’ win pushes the Spurs’ game six start time back an hour, giving fans an extra hour to beat traffic and get to the AT&T center on time. The last thing the Spurs need right now is a half-empty arena to start the game. Start time for game six is 7:00PM CST.