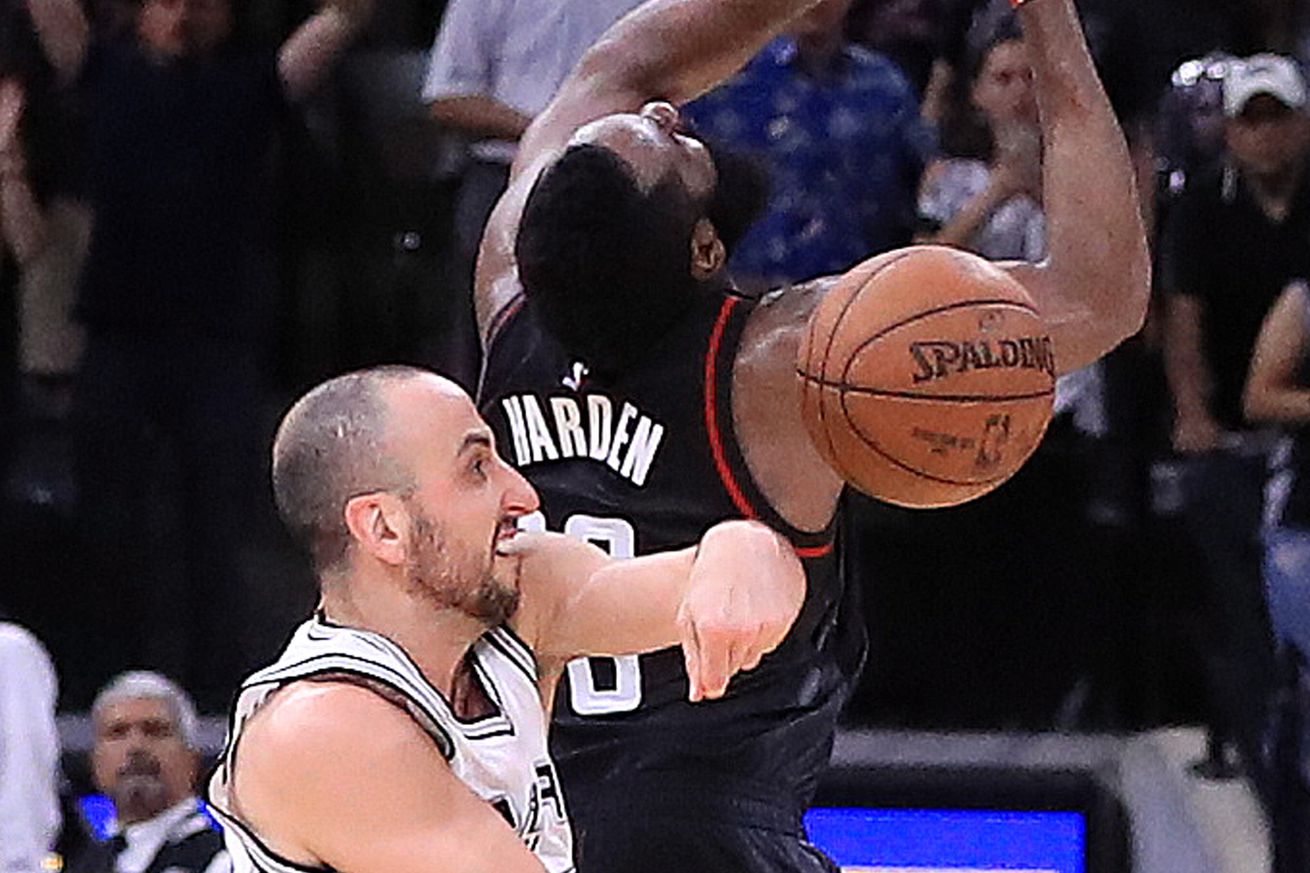 At 39, Ginobili delivered a solid season and more heroics than anyone could’ve anticipated.

Anything Manu Ginobili could bring last season was going to be a bonus for Spurs fans — another cherry atop a cake replete with them.

As the Freudian id of the Big Three, Ginobili’s style of play has become uniquely tethered to our collective heartstrings. We can recall the sinking anticipation that came with each calculated gamble as much as its ensuing bliss or disappointment. But after spending a career eliciting the entire spectrum of emotions in the Spurs fanbase, it’s only one — gratitude — that endured through year 15.

In his age-39 season, Ginobili exhibited his trademark blend of grit and grace, even as his contributions became more dependent on effort and opportunism than raw ability. His scoring (7.5 ppg) and minutes (18.7) were career-lows, and time had stripped him of his ability to finish around the rim (he actually shot worse inside the arc (38.7% on twos) than he did outside (39.2% on threes). He also led the Spurs in charges taken, was active on the defensive glass, posted his highest steal and block rates in years, and remained their savviest inbounds defender.

There were still plenty of moments in 2016-17 when Manu resembled his old risk-it-all self. He continued to try and fit passes through impossible spaces.

Still not really sure how Manu knew Kawhi was there… pic.twitter.com/yWWUPsptks

He still beat every Cavalier down the floor on a Monday in late march, caught an alley oop and contorted his body to complete a reverse.

Wings don’t play until this point in their careers often, and they rarely do so at a high efficiency. Look at the list of non-bigs that hung around at age 39 and put up over a 13.5 PER and you only see a short list of one-name greats: Jordan, Stockton, Dominique, Reggie. That’s the company Manu joined last year.

After a solid regular season, the start to Ginobili’s postseason suggested the magic may have run out. He went 0 for his first 19 field-goal attempts and didn’t score a point in the first four games of the Memphis series. And that still wouldn’t have taken much away from an otherwise-solid year.

Then, on script, Ginobili helped push the Spurs to victory in a pivotal Game 5, going 4-for-6 for 10 points, three assists and three steals. After the game he joked that the performance was celebrated only because his bar had been lowered so much — which is partially true — but it’s also because he’s earned an idolatry that now forgives the lows in bated anticipation for the next high.

And more highs came in Game 5 of the Rockets series, which featured this dunk off the wrong foot…

…and, of course, the play that sealed the win:

Every angle of Manu’s block in all its glorypic.twitter.com/rHTbt8tQjR

The 2017 playoffs weren’t meant to be a weird, possibly premature goodbye to Ginobili, but as Tony went down against Memphis and then Kawhi gut hurt versus Golden State, that’s where the lens inevitably shifted.

During the Warriors sweep, as our Game 1 outrage curdled into 0-3 helplessness, watching Manu became one of the few consolations. He started Game 4, scored its first basket and received its loudest applause through the final horn.

It’s entirely possible that he returns in 2017-18 — and that all the retirement-flavored tributes become superfluous — but it doesn’t make the cheers he’s gotten over the course of this season any less deserved.