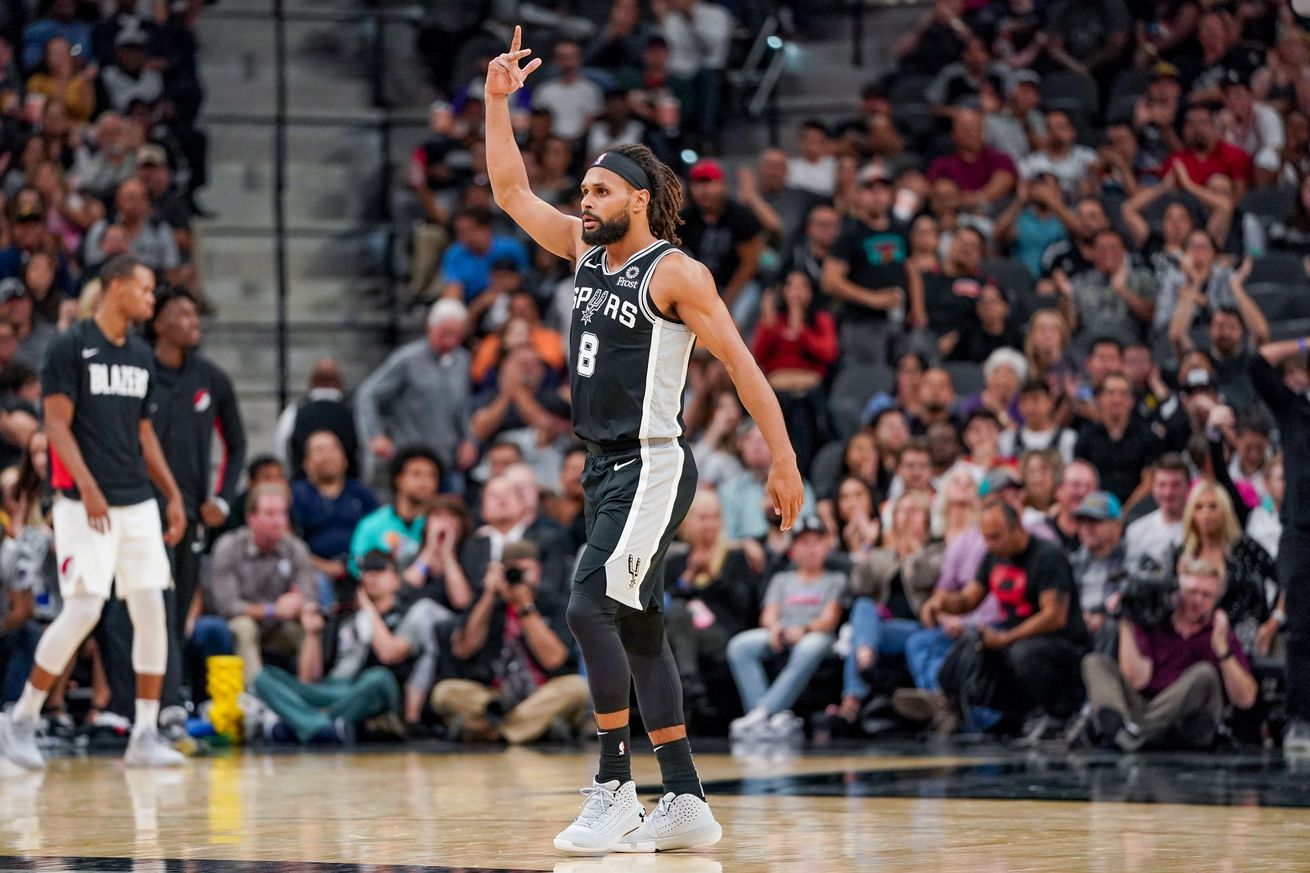 Patty Mills chipped in nearly half of the Spurs’ seven made three pointers in Monday night’s uneven defeat of the Trail Blazers over just a 4 minute period bridging the 3rd and 4th quarters. With his incessant motion and nearly frenetic pace, it’s fair to say that guarding Patty in a SEGABABA is one of the least desirable assignments to draw.

Still, the Trail Blazers’ defense did an excellent job all night long of preventing the Spurs three-point shooters from finding clean looks, holding the Silver and Black to just 22 three-point attempts in all. That isn’t especially low for the Spurs, who ended the night taking threes on just under 26% of their field goal attempts: right in line with their first two games of this season and just below their average for last season. But only 15 of their 22 attempts were classified as open or wide open, which is well below the the 20-22 open and wide open three-point attempts per game they’ve averaged over the last year.

The first of Patty’s threes was a result of one of the few times the Trail Blazers’ defense made the fatal mistake of leaving a shooter open. As time wound down in the 3rd quarter, the Spurs used a simple pick and roll and some crisp passing to get Patty a shot from the left corner.

This is similar to the play the Spurs ran to close out the Wizards, but it’s on the opposite side of the floor and Jakob Poeltl is setting the screen instead of LaMarcus Aldridge.

Though Jakob is not a threat to pop, meaning the defense has one less option to cover, he’s plenty dangerous on the roll and can easily punish smaller defenders with his offensive rebounding. That pays off here, as once DeMar DeRozan is able to draw the switch, Jakob drags a small down into the post, which distracts Skal Labissiere enough to leave Rudy Gay all by himself on the wing.

DeMar immediately reads the opportunity and snaps the ball sharply across the floor. As an aside, fancy passes get a lot of attention, but don’t sleep on the value of a ball thrown with pace to exactly the right player in exactly the right position. The ball hits Rudy right where he needs it to step smoothly into a three, forcing a more aggressive close out and leaving a clear passing lane to Patty in the corner. Labissiere is far too slow getting back out to defend the shot, especially given how little time was on the clock, and Patty’s quick release makes short work of the opportunity.

Patty’s next two threes were more in line with his usual modus operandi, in which his constant relocation punishes the defense for even a moment’s inattention.

His casual flip to Rudy draws the attention of both Anfernee Simons, who is correctly prioritizing stopping the ball, and Mario Hezonja, who is mistakenly trying to get back to his man instead of picking up whoever is open.

Hezonja’s poor decision leaves CJ McCollum to pick up both Patty and Derrick White. McCollum reads the situation immediately and waits for Rudy to commit before reacting to Derrick catching on the wing. Unfortunately for the Trail Blazers, Hezonja’s not quite quick enough to get all the way across the court to Patty, who is already in the corner and waiting by the time Derrick swings the ball.

Patty’s last three-point make came just a minute and a half later off a well orchestrated adjustment to a simple play.

The double drag screen is run by just about every team, and a growing number of them will put a shooter in the lead screener position to complicate the coverage. A common play out of that setup is called Oklahoma. The big in the second screener postion sets another screen for the shooter after the ball handler crosses to the other side of the floor, so the shooter is coming off a screen towards the ball at the top of the key. Here are the Spurs running that play against the Wizards.

Against the Trail Blazers, Damian Lillard was denying that second screen, keeping Patty from getting back to the center of the floor.

The denial, as usual in the Spurs’ offense, leads to a back cut. Patty isn’t open on his way through the paint, so Dejounte Murray passes it off to LaMarcus, triggering the 2nd part of the play, then cuts hard into the paint. The setup here, where a Spur passes to a big at the top of the key then cuts hard from the wing into the paint, almost always leads to the next player along the perimeter running into a dribble hand off with the big, but not here.

Instead, Marco Belinelli takes a couple of anticipatory hops like he’s getting ready to go, then just turns and gets in the way. Lillard slams into Marco’s sudden screen and McCollum is completely lost. Even if he had been ready for the switch, LaMarcus was waiting with another screen. It’s a beautiful setup that gets Patty the kind of wide open look he rarely misses.

Like in any close game, had almost any single play gone differently, the outcome could’ve gone the other way. But it’s worth noting that Patty’s timely threes helped the Spurs stretch an 8-point lead back out to 12, a margin which just barely allowed the team to hang on for a white-knuckle win.