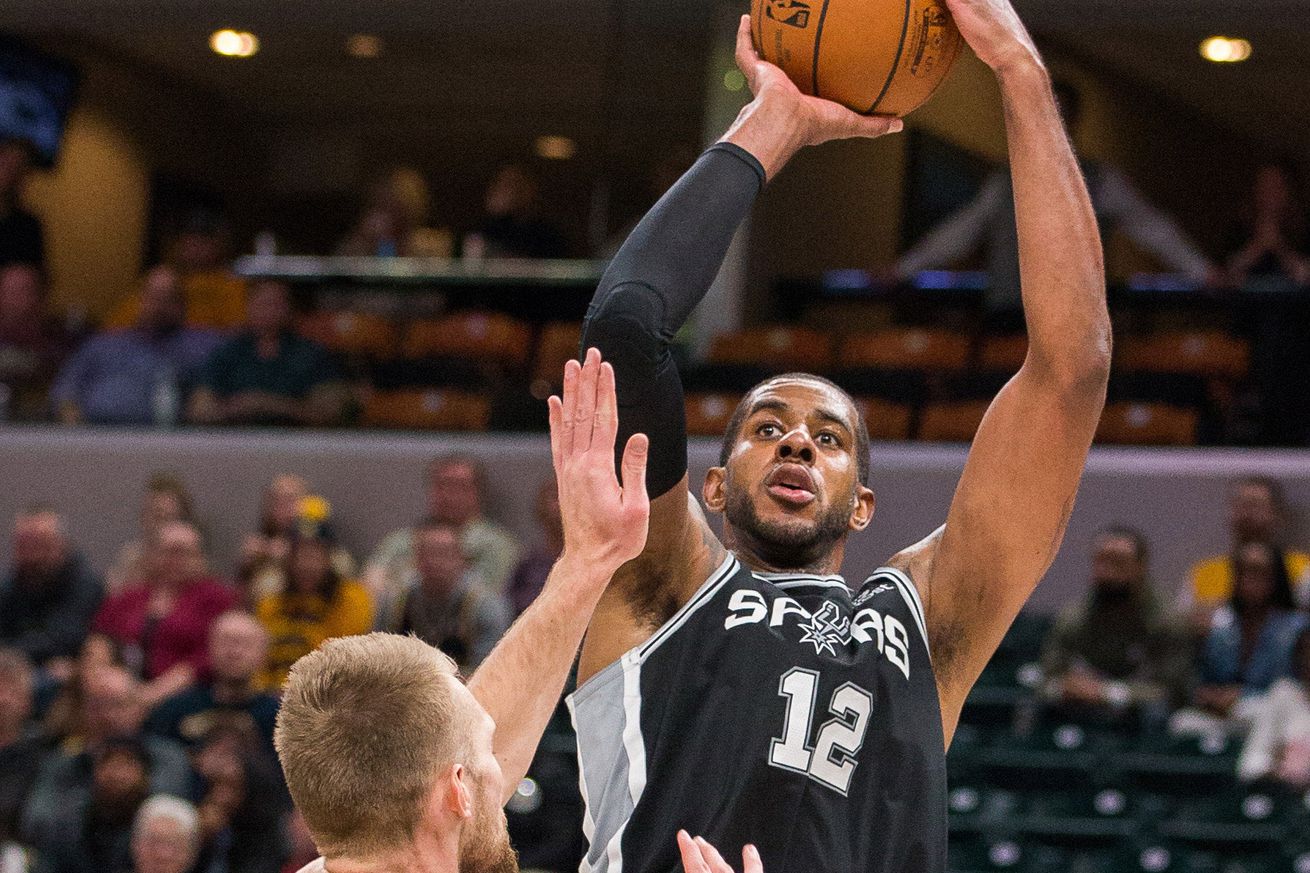 And why we shouldn’t expect it to stick.

After weeks of consternation (and more than a few jokes) over LaMarcus’ poor start to the season, the Spurs all-NBA big man showed out last night in the team’s win over the Pacers. It’s tempting to look at his raw stats – 33 points on 25 shots and 56% shooting – and declare his early struggles a thing of the past, and that may be the case. But even within the numbers from last night’s game, there’s reason for concern.

The Spurs made a concerted effort to get LaMarcus involved right from the start and he took 3 of the team’s first 4 shots. That could have been matchup based, since Indiana was missing Myles Turner, but Thaddeus Young spent far more possessions guarding LaMarcus than any other Pacer in the first game, so perhaps not. It seems more likely that it was intended to get him engaged and involved right from the tip.

Whether that had any effect, or LaMarcus was just due, it looked like he was going to be a problem for Indy all night long once he made his first 2 shots, an open 19-footer off a pick and pop and a driving layup around Domantis Sabonis.

Those two plays were rarities, though. LaMarcus only took 2 more shots off pick and pop actions, a missed pullup jumper and a blocked layup.

The biggest share of his scoring came off postups, where he put up 13 points on 8 shots and 1 of 2 at the line.

These are difficult looks, by and large, but LaMarcus isn’t threatened by the size and reach of Sabonis or Young, and is obviously comfortable shooting right over the top of them.

His success on scoring off pick and rolls in this game, especially after using the roll as a setup to seal his man deep in the paint, belies his overall struggles near the rim. He’s averaging a career low 60% within 4 feet of the basket so far this year, per Cleaning the Glass (CTG), and went 4/9 in that area against the Pacers.

In order to sustain the success LaMarcus found against the Pacers, he’ll need to hit a greater share of his close range shots, as it’s unlikely he will shoot so well on contested midrange jumpers on a regular basis. That is his game, though, and he’s made a career of making shots nobody else can take. Still, LaMarcus and the Spurs need this type of performance on a nightly basis, and that’s where this game appears to be a potential outlier.

His average shot was a little closer to the rim than his season average, according to PBPstats, and the quality of his shots was the 2nd highest of any game this season. Essentially, he got a few more open looks than usual, but those aren’t the ones he made. He shot better on tightly guarded shots (10/15) than on open and wide open looks (4/7), per NBA.com.

He’s been struggling on all kinds of close-range shots, and has been especially poor at putbacks, as noted by Jeje Gomez at halftime.

LaMarcus Aldridge had a killer half, but it would have been even better if he hadn’t miss on a few putbacks. It’s been an issue all year. He’s shooting 46% on putbacks this season after shooting 68% last season. At least partially explains why his percentage at the rim is so low.

Therein lies the concern going forward. If this continues, the Spurs will only get this kind of scoring from LaMarcus when he gets hot. That will happen from time to time, but not often enough. They need him to convert those close range opportunities at a high rate every night. Fortunately, Bruno Passos has a recommendation for how he should go about doing that.

If you have sharp eyes, you might have noticed something interesting on one of LaMarcus’ rolls to the rim – there was nobody to help.

This play starts out in a familiar way, the ball handler, Patty Mills in this case, drives on the wing, then reverses course back towards the top of the key over screens from Davis Bertans and LaMarcus. After Davis sets his screen he dives towards the basket into the dunker spot on the weak side of the floor. With Derrick White in the corner and Bryn Forbes on the wing on the same side, there’s nobody left on the strong side to tag LaMarcus as he rolls to the basket.

As LaMarcus catches the ball, Kyle O’Quinn is blocking Patty’s path to the basket while Aaron Holiday attempts to recover. T.J. Leaf has his back turned as he follows Davis’ cut, leaving LaMarcus an open lane to the left side of the rim. O’Quinn recovers to contest the shot, but fouls LaMarcus in the process, leading to 2 made free throws.

As Ben Falk laid out in an excellent article on Cleaning the Glass this week, this version of the pick and roll appears to be more common this year. The Spurs definitely ran it more in this game than I ever recall seeing before, and in a variety of arrangements. Here are the rest.

It’s a cool play, and the Spurs mostly got good results out of it, including Dante’s Manu moment. While there are some obvious tactical adjustments to be made, as laid out in Ben’s article, it presents the defense with an interesting dilemma.