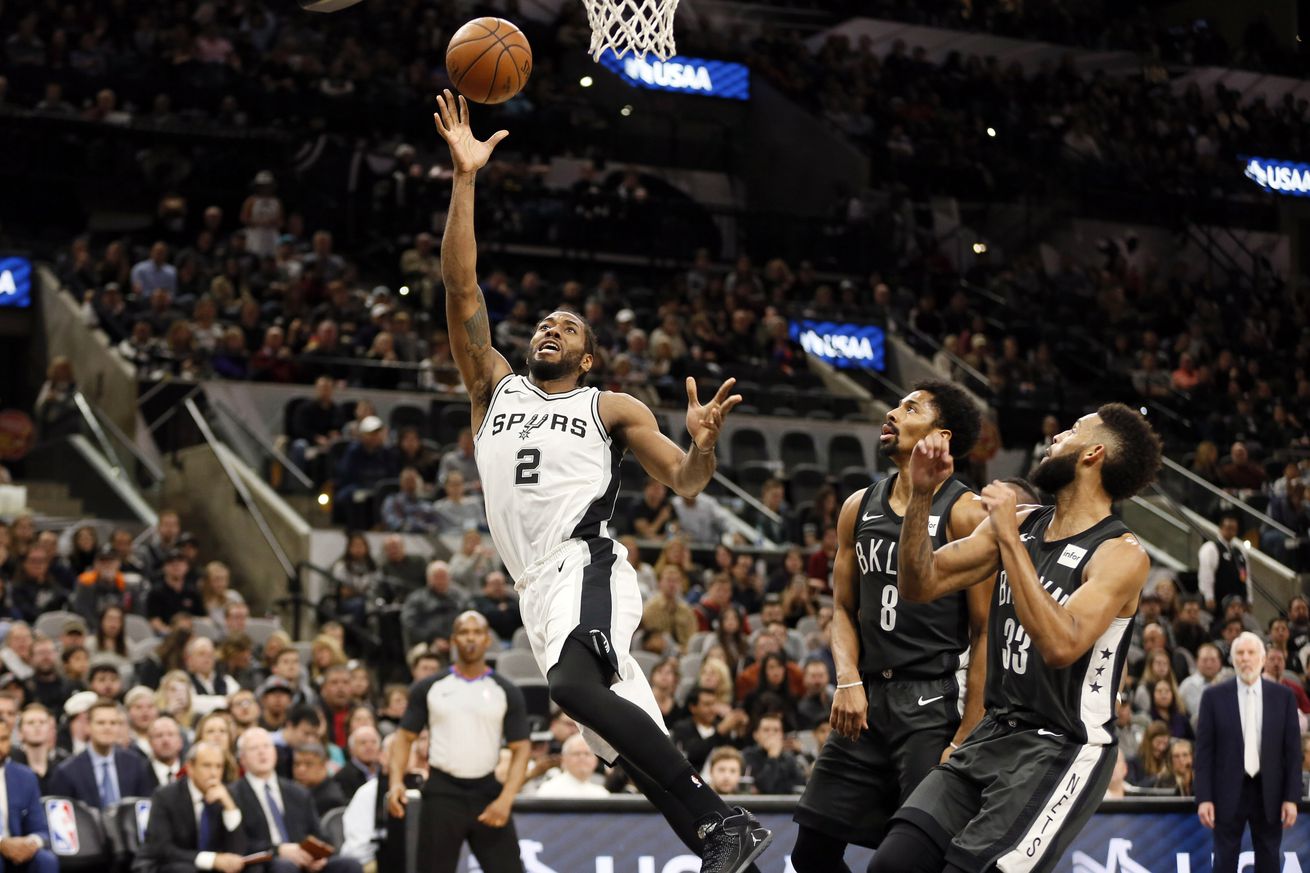 In the first game with everyone healthy, the Spurs showed glimpses of what the rest of the season could look like.

For the first time this season, Gregg Popovich and the Spurs had a full – healthy – roster. It was impossible to know what Coach Pop would do with his bounty and even he, before the game, wasn’t sure how it would play out, commenting that his assistants kept nudging him with suggestions. So it wasn’t surprising to see a lineup of the regulars starting the game – Tony Parker, Danny Green, Kawhi Leonard, LaMarcus Aldridge, and Pau Gasol.

For the first several possessions of the quarter, the Spurs gave us a small glimpse of what could be considered the “real” start of our season. Kawhi blowing by a defender for an easy pull-up jumper and Parker giving us a vintage stop-and-pop score reminds us of where they were at the end of last season. Danny Green’s runner off the window and his harassing the Brooklyn Nets on defense showed that he was also feeling spry. But it was Kawhi’s incredible reverse under the basket move that may have been the indicator that the team is starting to trend toward being completely healthy. End of quarter score was 19-16, Spurs up.

The quarter saw more of LMA and Kawhi trying to work together when Kawhi passes to Aldridge. LMA doesn’t score on the pass, but he draws a foul. The two are communicating well. For those worried about Kawhi returning to ISO ball, he spent most of this quarter sharing the ball and setting up his teammates. And his teammates were also sharing the ball, like this Bertans assist to Green for the slam.

Bertans with the eye-catching feed to Green for the flush. #SoPretty pic.twitter.com/mDQsC8CziO

The silver and black went a little cold for a period in the quarter, so Pop started experimenting – Bryn Forbes in for Kyle Anderson and then Dejounte Murray in for Danny Green. But the scoring came back after Kawhi had a dunk and a steal. End of quarter score was 50-44, Spurs up.

I don’t know what they gave the guys in the locker room during halftime, but please don’t do it again because the Spurs came out ice cold. By the 9:58 mark in the quarter, the Nets had tied it up at 51. After LMA got a sweet turnaround jumper, the cover seemed to come off the hoop. Manu seemed to want to take over the game and he had some intense defense (fighting down low for the ball) and some throwback offense (driving twice to the basket for lefty layups). After a slow start, we end the quarter up by 11 and added only one turnover to our tally. End of the quarter score was 80-69, Spurs.

Manu ended the 3rd quarter with his energetic play and he started the 4th with a layup and a steal. Then LMA went to work in the post with several possessions where he schooled the Nets by getting physical. Danny Green then pulled out his defense of old, chasing down Caris LaVert and “steals” the ball.

Danny takes it away! pic.twitter.com/O0jF5teCH9

Which led to this tweet by our own Bruno Passos.

DANNY GREEN IS A JEDI

It looked like Kawhi was done for the game, having played 23 minutes in three quarters, but at the 4:26 mark in the fourth, Pop subbed him in (and he scored 4 more points to end with 21 pts., 2 assists, and 2 rebounds in 26 minutes total). But Manu wasn’t ready to take a seat, and gave the crowd something to yell about with a put-back Grandpa Juice dunk off a Kawhi missed layup with an And-1.