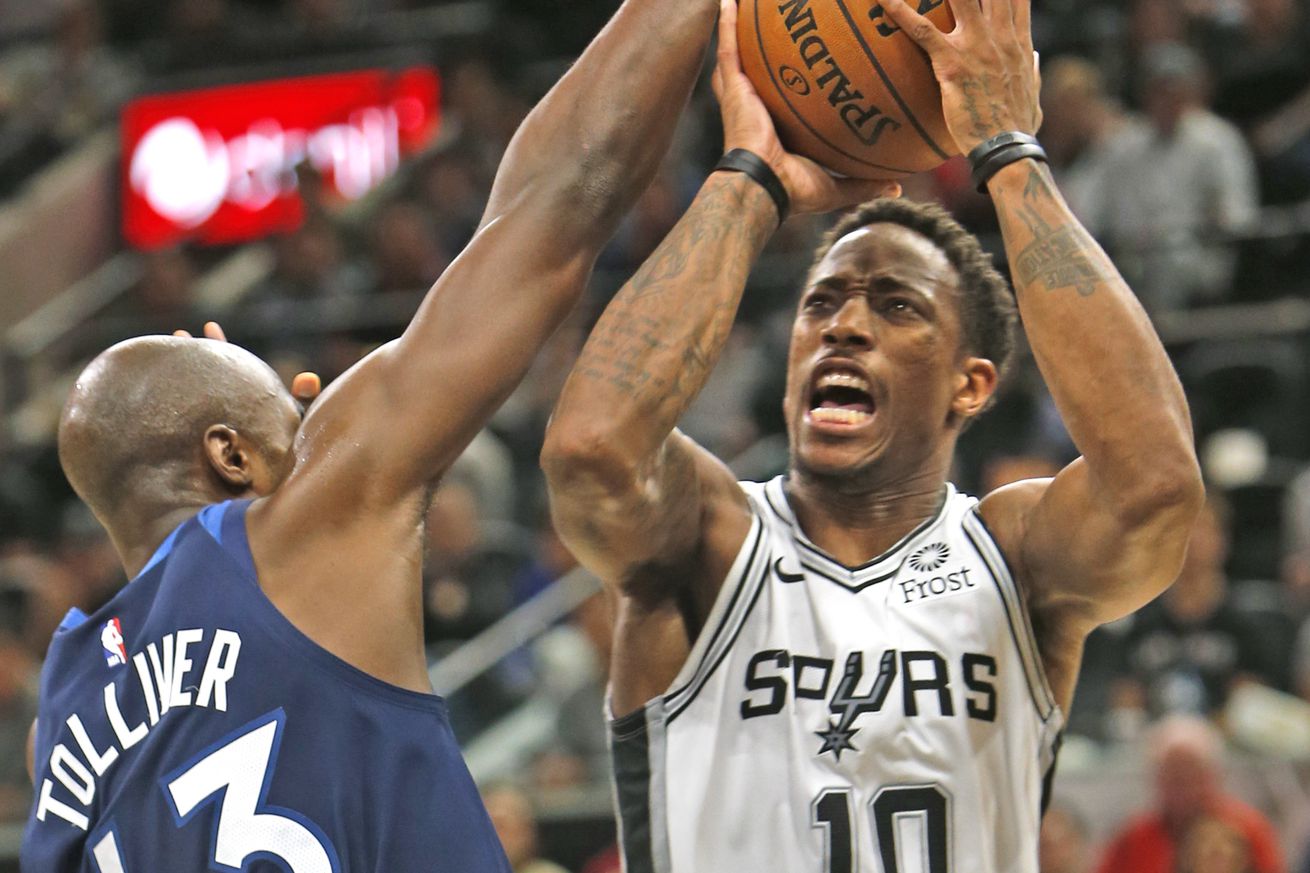 In a season chock full of pressure for the Spurs new star, injuries have just turned it up to 11

When PATFO traded for DeMar DeRozan back in July, I was less than pleased. And though this had more to do with my prior (and naïve) hope that a point of reconciliation with a certain crustacean-appendaged small forward was on the horizon in the form of a super-max contract (as well as my long-standing fondness for Danny Green), it also had a lot to do with one of the players we were getting in return.

I hadn’t paid enough attention to Jakob Poeltl to warrant praising or protesting his addition to the team. We still needed a backup big-man, and he seemed capable enough to fill the space without completely Lauvergne-ing the second the unit à la 2017-2018. (I’ve since become a big fan. The kid sets a killer pick.)

DeRozan on the other hand I had very definite opinions about. As a player he regularly exhibited two of the traits that I dislike the most in modern NBA stars: bad (and/or lazy) defense, and a tendency to try and volume-shoot his way out of a slump. (Thanks, Kobe) In addition to this, I didn’t see shooting guard as an area of need for the Spurs. We still had Mills (I love Patty, but he’s not a true 1-guard), Manu, White, Forbes, and Belinelli, all of whom can play the 2. And additionally, PATFO had just drafted another very promising shooting guard in Lonnie Walker V. What the Spurs clearly needed was a talented perimeter defender, who could still score, as well as shoot the three at a league average clip or better. (Like say, Jimmy Butler?) And All-Star or not, on paper DeRozan just seemed like an awkward fit within the Spurs System.

And yet, despite my clear-headed and largely unbiased grasp of the situation, Pop and R.C. failed to consult me yet again (see also: ignored copious amounts of my hate mail), and I was left to find the silver lining in a trade that I felt rather ‘meh’ about as a whole. This isn’t to say that I outright hated the trade in question. Considering the situation, I had to admit it was a defensible return, and the relief from the oppressive gloom of the off-season that it granted had me downright euphoric. But in spite of writing a fairly optimistic article on the subject, I was still mulling over some serious concerns about our newest star.

I had done some cursory research of course. I had found that his three point shooting wasn’t entirely the liability that I had considered it to be, and that he was a better passer than memory had served, but the problem of that putrid perimeter defense continued to lurk in the back of my mind. Worse still, the more I (and especially Jeje Gomez) examined it, the more it became clear that this was largely due to a lack of effort, rather than the result of problematic strategic usage that I had hoped it might be.

Say what positive things you will about the player-centric nature of the NBA, but one of the biggest drawbacks of that mindset has been the elevation of individual talent, accolades, and branding, over a proper valuation of team effort, hard work, and that dirtiest of all words: sacrifice. More than in perhaps any other major sport, it’s easier to see when a basketball player in invested more in self than in the intangibles required for team success, and harder to ascertain whether they are capable of sublimating ego in the pursuit of team goals. And the list of thirty-year old NBA players who had already achieved stardom but proved willing to make significant changes is a great deal shorter than the list of those who were not.

So the question became one of character as opposed to one of skill, and to be honest, it wasn’t one that I felt well equipped to handle. Would DeRozan prove to be an Earl ‘The Pearl’ Monroe, or more of a Dwight ‘Duperman’ Howard? Having paid about as much attention to DeMar as I do most Canadian sports heroes, I just didn’t know enough about his personal nature to feel comfortable hazarding a guess. A player much less verbose than DeRozan had won my confidence and then crushed it over the course of a mutedly tumultuous season, and I wasn’t feeling particularly hopeful. And that DeRozan certainly hadn’t chosen to come here in the first place didn’t exactly ease my mind on the subject. So I waited.

And at long last, the preseason arrived, and there he was, running the floor in a Spurs uniform. And while the NBA preseason is largely a half-speed exhibition of strategic masturbation, I was encouraged by what I saw. Here was yet another San Antonio player putting in effort on the defensive end, eschewing inefficient shots in favor of better matchups, and making the extra pass. With each possession I was growing more and more optimistic. Not only was DeRozan displaying a higher level of defensive effort, but Dejounte Murray was masking his flaws perhaps even more effectively than Kyle Lowry (who is no slouch defensively) had in Toronto. Combined with DeRozan’s increased discretion on the offensive end, this experiment was looking like it really might work after all!

But then the injury bug that’s been bedeviling the Spurs since the 2016 postseason reared its ugly head once again, taking Murray out for the majority of the season at least, while sidelining Derrick White, and promising rookie Lonnie Walker IV (and briefly Rudy Gay) in the process. Season. Over.

Except it isn’t over. We’re only a single game into it thus far, with eighty-one more to play. And that’s the funny thing about NBA seasons; they don’t magically vanish after your visions of dark-horse contention have essentially been shattered. You have to play the rest of the games.

And Wednesday night, that’s just what the San Antonio Spurs and DeMar DeRozan did. And what’s more than that, they won. Granted, the win came against the only team to arguably endure a more tumultuous off-season than the Spurs, and against a coach whose offensive play calling remains a decade behind the curve, but the Minnesota Timberwolves were a playoff team last year, and an already banged up Spurs squad went toe-to-toe with them all night. (Holding them to twenty-three points in the first frame, and twenty-five points in the fourth.)

I’m not here to say that the Spurs are still within the realm of contention. Barring Egyptian plagues or a league-wide rash of superstar injuries, they’re not. But after watching this team (and particularly DeRozan’s performance), I’d be willing to argue that a playoff berth isn’t completely out of the question this season. To be sure, an 8th or even 7th seed would likely be the team’s absolute ceiling thanks to a certain pesky ACL injury, but DeRozan’s presence (unlike last season’s notable absentee) is mitigating the damage done to the team’s guard roster; especially his passing.

My former assertion that DeMar is a good passer, is as inadequate a rating as my previous ‘research’ proved to be. For four quarters on Wednesday night DeMar DeRozan proved time and time again that he is an excellent passer; his anticipation and placement stymieing the Timberwolves time after time, as he took advantage of their ill-timed switches and overcompensation. And while the box score only shows four ‘classic’ assists, it was clear to anyone watching just how key DeRozan’s contributions were to the Spurs’ ball movement. On many occasions, it was a savvy pass from DeRozan that led to an assist pass and a basket for his teammates, (That the NBA hasn’t adapted its scoring systems to account for hockey-style assists like those is honestly beyond me. Imagine how many assists Manu would have!) and the mere threat of his presence in addition to Aldridge’s in the post led to chink after exploited chink in the Minnesota defense.

Even more surprising was his level of effort on the defensive end. Helped in large part by a surprisingly adequate performance from Bryn Forbes, as well as the looming teeth of the Spurs interior (LaMarcus has never defended better), DeMar remained fully engaged throughout the game. And while he’s no stopper by any means, he also managed not be a sieve either, helping the team stay in the game throughout the fourth quarter. But more than anything, it was the spirit that he displayed that gives me hope for this Spurs team.

My greatest concern (prior to the aforementioned injuries) for this year’s team has been less statistical and more emotional since the retirement of Manu Ginobli. At times last year it seemed like he was one of the only players on the court with any dog in them, and wonderful though it was to see him working his old magic time and time again, I couldn’t help but feel concerned that the team was having to lean on a near-mythical yet physically dwindling forty-year old shooting guard for the drive and the moxie needed to finish tight games. Rest assured that that will not be the case this season, and not just because of Ginobli’s absence.

In the last three minutes of the fourth, DeRozan gave a performance that was downright Manu-esque: methodically pushing and probing the Timberwolves defense, taking charge of the ball and the court with his demeanor, and even sealing the victory with a crafty last second and-1, driving one-on-one versus Jimmy Butler (who is also no slouch defensively), only to pull up right in his face.

Wednesday night’s game will serve as a warning to the other teams out West, as well as an announcement to the NBA at large. This Spurs team has a leader. Underestimate it at your own peril. If there’s any disservice I’ve done in previously comparing DeMar DeRozan to Kobe Bryant, it’s that he’s a better teammate and a more willing passer, but the competitive drive, the will to win, and that sweet mid-range J are all there too, and in the hands of Greg Popovich, that’s a terrifying prospect.