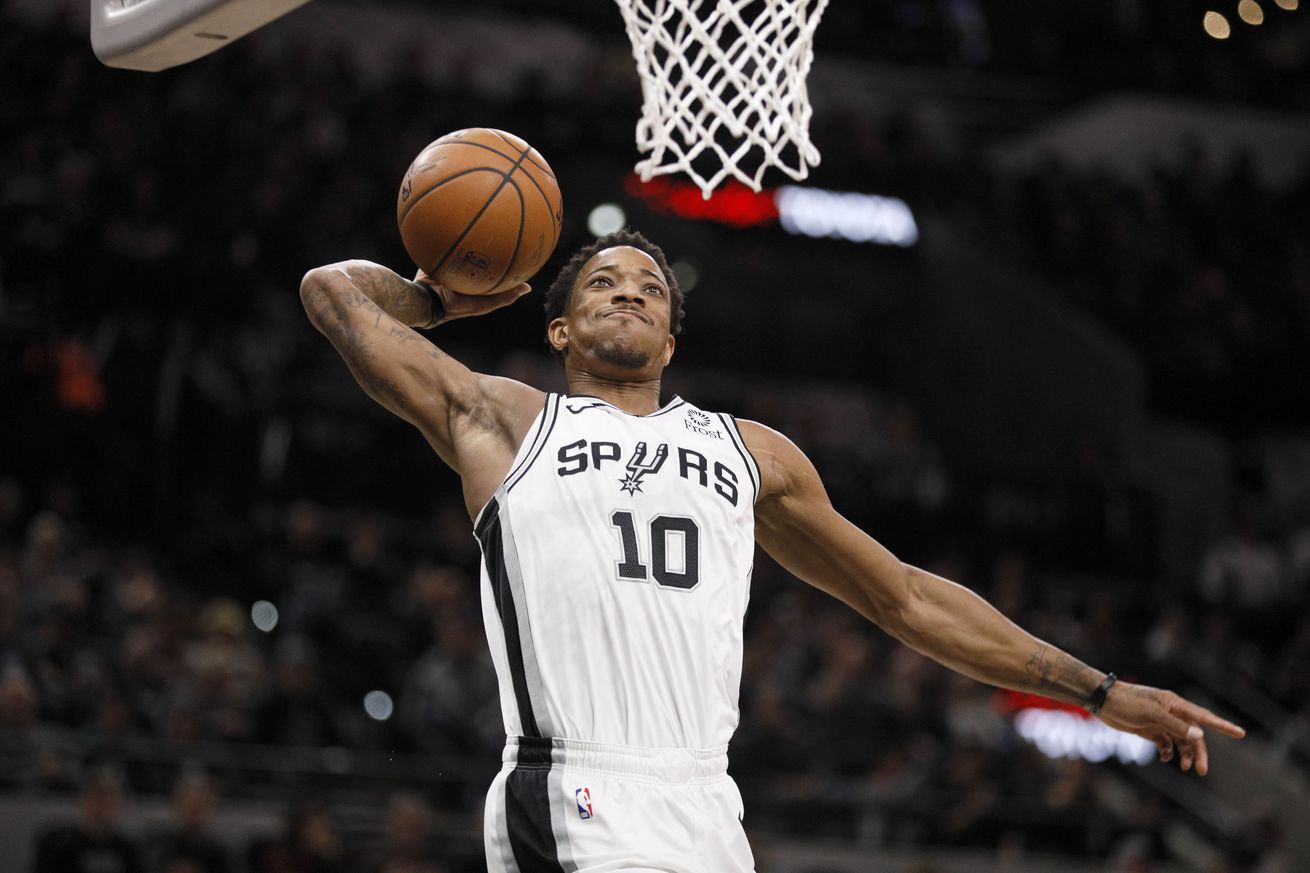 DeRozan’s dunk and triple-double in Kawhi Leonard’s return to San Antonio helped both him and Spurs fans get some closure.

A single play can tell us a lot about a player. In this new series we’ll take a look at the best or most meaningful moments from every Spur, hoping they can provide some insight into what makes them who they are. This time, DeMar DeRozan.

It’s hard to remember a Spurs regular season game causing this amount of anticipation. As soon as they pulled the trigger on the trade they were forced to make over the summer, everyone wondered when Kawhi Leonard’s return to San Antonio wearing a Raptors jersey would happen. Once the schedule came out, lots of fans started to look forward to Jan. 3 and the opportunity to let Leonard know exactly how they felt about him.

DeMar DeRozan was looking forward to that day for a different reason. It was going to be the first time he’d face the team that drafted him and in which he had forged lasting friendships but had also traded him after telling him they wouldn’t. To him, the match-up was his opportunity to get revenge, to put on a show to prove that, at least for one night, he was the better player in the transaction. He seized that opportunity with both hands.

At that point in the season, the Spurs were 21-17 and on an upswing, largely thanks to DeRozan’s strong play, and yet what he did that night was unprecedented for him. DeMar recorded the first triple-double of his career, and he did it with the kind of efficiency he didn’t show too often in Toronto. He also made time to do something the Raptors’ faithful had him seen do a lot but Spurs fans were just starting to enjoy: throw down one if his signature dunks:

The dunk wasn’t on anyone in particular — good defense there, Toronto — but DeRozan made sure to make it as violent as possible, as if he was trying to detonate on Raptors’ General Manager Masai Ujiri. He cocked his arm back and threw it down with the righteous indignation of someone who believed he’d been wronged. Yet as soon as he came down and Toronto called a timeou,t there was no rage in DeMar’s face. He quickly celebrated with his teammates and then went to the bench.

Kawhi’s return to San Antonio was somehow healing for Spurs fans. They got to see him lose, which was fun, but more importantly, the much anticipated night provided a sense of closure. No one forgot the mess Leonard caused on his way out, but we collectively realized there was no point in spending so much energy thinking about it anymore. We had this new team to worry about.

DeRozan got some healing and catharsis of his own, it seemed. After the game, when asked about the importance of the match-up he had circled in his calendar since the schedule came out, he seemed disinterested in giving the feud with the Raptors front office new life.

“I didn’t want to put too much pressure on it,” DeRozan told Kristen Ledlow. “Just go out there and have fun. My teammates embraced me going out there to have fun, so it was a a great game.”

There was no chest-thumping or passive-aggressive messages to anyone. Instead of fired up, DeRozan looked just happy and a little relieved that it was all over. Even when asked about his triple-double he deflected the praise, saying his teammates had made him look good by hitting their shots. Neither his words nor his actions were the ones of someone still holding on to some grudge and trying to prove to people who wronged him that they had made a mistake. DeMar had just taken care of business and was ready to move on.

To say that was the night DeRozan became a Spur would be wrong — he bought into the culture from the get-go. But it was the day he truly stopped being a Raptor, if that makes sense. As his revenge game ended, he probably realized how pointless those really are. He was in San Antonio now, trying to help carry another franchise, while Toronto had moved on as well with another star. Nothing would change that.

Yet, it seemingly took that dunk and arguably the career-best performance that followed to finally allow DeRozan to realize that and let go of the past. And with them he helped a lot of Spurs fans everywhere do the same.

A dunk against the Raptors allowed DeMar DeRozan to let go of the past
Source: Pounding The Rock