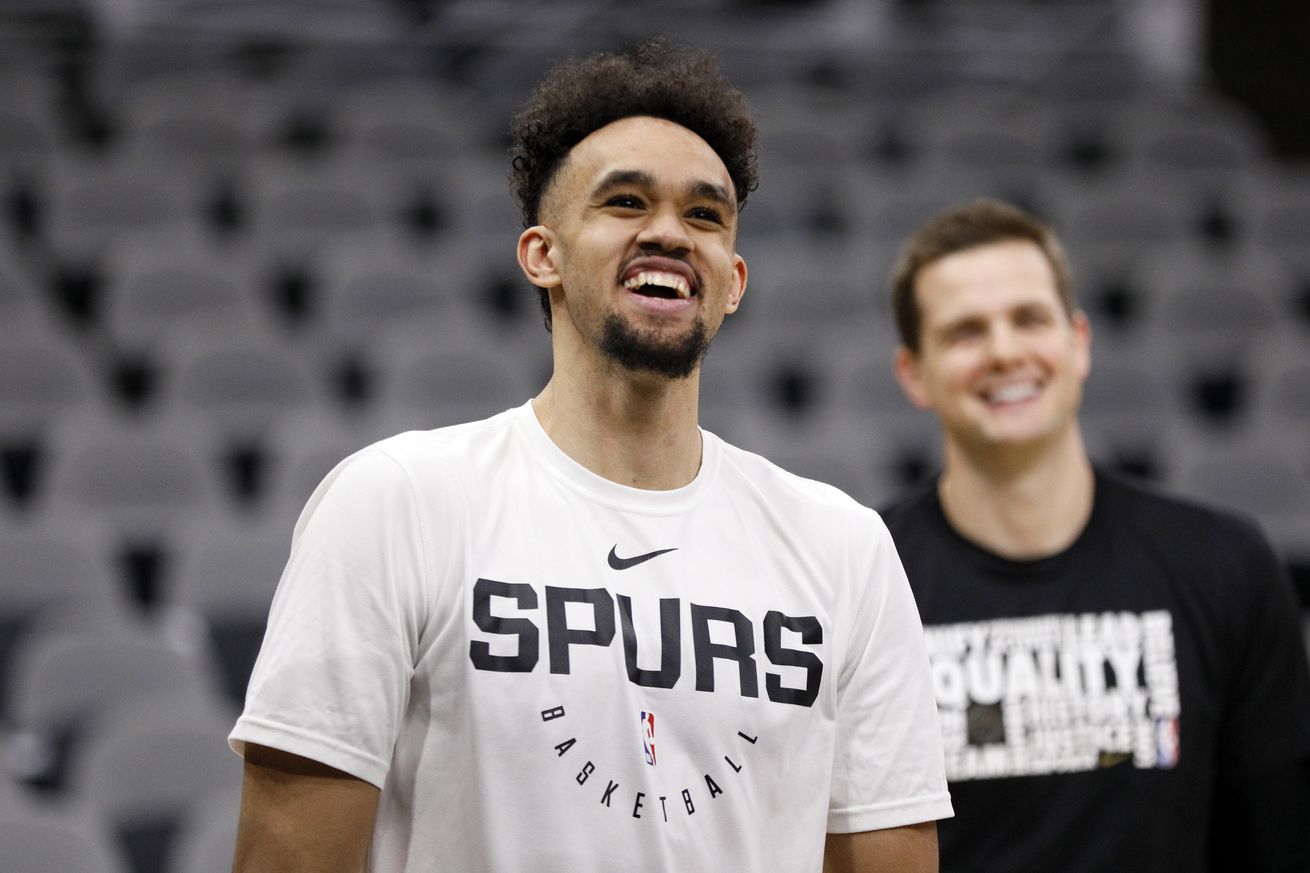 The youngster’s recognition of openings in the defense sets him apart.

Derrick White had quite a night as the Spurs beat the Hawks on Wednesday. He put up some pretty rare numbers, but was happier about the win than the stats. The thing is, as we’ve covered before, Derrick’s level of activity and involvement is as close as this team has to a bellwether of the quality of their play. This game was no exception, and late in the 4th quarter, with the game still very much in doubt, Derrick asserted himself, scoring or assisting on 12 straight points, as the team rebuilt its lead and put the game away at last.

After Kent Bazemore knocked down a pair of free throws to tie the game at 91, the Spurs ran a very nice set with multiple options that resulted in Derrick taking and making an open three from the top of the key.

Derrick tosses the ball to Davis Bertans on the right wing, then clears to the strong side corner while DeMar DeRozan uses a screen from LaMarcus Aldridge to cut towards the rim. Alex Len sags off LaMarcus to cover the cut, so Davis swings the ball his way to initiate the next part of the play.

LaMarcus turns for what would typically be a dribble hand off with the weak side wing, but the Spurs do something different here. DeMar sets a screen for Davis, who cuts to the rim and then out to the left corner, then turns and sets a screen for Derrick, who pops to the top of the key. Trae Young is distracted by Davis’ movement through the paint and is late to react.

Meanwhile, after passing to Bryn, LaMarcus turns and sets a 2nd screen for Derrick, leaving him wide open when he receives the ball and knocks down the three.

On their next 2 possessions, Derrick ran the pick and roll with LaMarcus to perfection.

On both plays, LaMarcus sets a screen for Derrick on the right side of the floor and Derrick works towards the middle, shaking Young twice in a row and reading Len’s drop to find the best option. The first result is an open floater and the second is one of the most wide-open layups you’ll ever see in the crunch time of a close game.

LaMarcus knocked down a jumper off Derrick’s inbounds pass on their next possession. Then, after getting his 6th block of the game on a Young drive, Derrick took the outlet pass from Rudy Gay and pushed the ball up the floor.

This is almost too easy. Derrick sees the advantage before he’s even reached half court and accelerates to keep Bazemore on his hip. That forces Young to choose between giving Derrick a path to the rim or leaving Davis. He probably would’ve been better off to force Derrick to make the contested layup, but given how Derrick’s night was going, that probably would’ve gone in, too. As it happened, with both guys on him, Derrick makes a perfect pass to Bertans who drops in his 12 point of the evening.

Derrick’s heady, patient game belies his dominance at times, but he was visibly dominant in this game, especially in the 4th quarter. He may not care how his numbers stack up, but it seems obvious that the higher he stacks them, the better his team is.