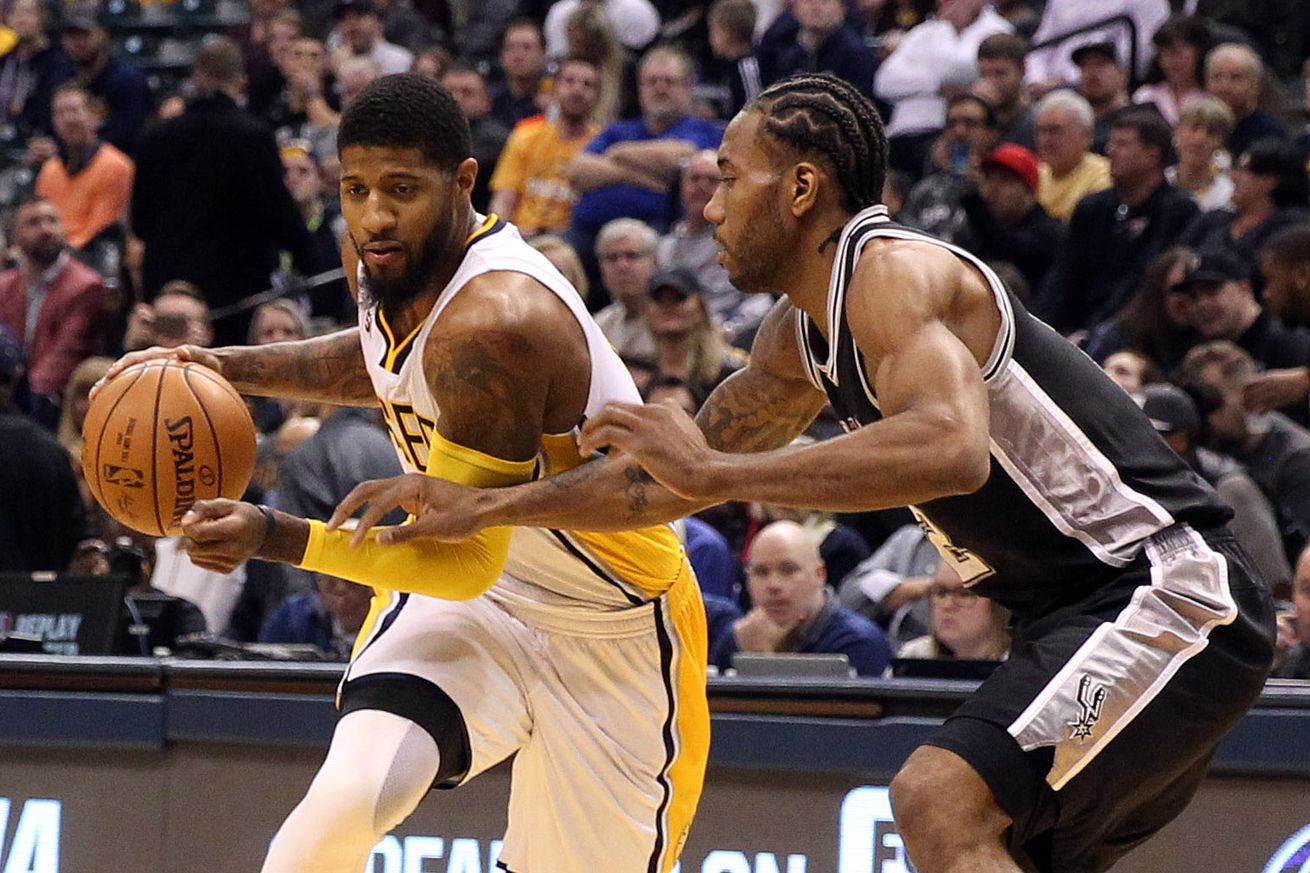 The Spurs won’t likely land George, but it wouldn’t hurt to try.

You can tell the draft is near when rumors start flying. Following the news that the Celtics and the 76ers have agreed on a deal that will send the No. 1 pick to Philadelphia, now there’s a report claiming that an All-Star is available.

Paul George’s agent has told Pacers General Manager Kevin Pritchard that his client intends to leave the team after his contract is up next season, according to The Vertical’s Adrian Wojnarowski. Now that he has confirmation, Pritchard has been reportedly more active in trade talks, contacting the Cavaliers and other unnamed teams which could potentially be interested in a rental.

Wojnarowski mentions that the Cavaliers don’t really have the young talent and draft picks the Pacers are after. He also doesn’t mention any other team that has been in touch with the Pacers, but it’s safe to assume only contenders who believe they are one piece away from getting to the next level will be interested. No rebuilding team is going to give up assets for what will likely be a few months of George.

The Spurs are, again, not mentioned, but they would make for an intriguing trading partner for the Pacers. Unlike other contenders, San Antonio has some young players on its roster and has control over all of its first round picks going forward. Making salaries match shouldn’t be a huge problem, either. The Spurs have Pau Gasol’s big expiring contract on the books and could potentially consider Danny Green to be expendable in a trade for another wing.

A deal centered around those two, Kyle Anderson or Dejounte Murray and picks for George and Al Jefferson, for example, works under the CBA. The Pacers are after a starter and two firsts, according to David Aldridge, and this deal could give them that, plus a youngster and future cap savings, as Jefferson is on the books for the next two years. Including a 2019 pick would be risky, but the Spurs could insist on some protections.

That’s just one possible configuration of the deal. There are other teams who could offer more, of course. Maybe Indiana is not enamored with Murray’s potential or Anderson’s evolving game. Maybe Pritchard is looking for picks that could land higher. Green is a quality contributor, but he makes more sense on a contender. They could always flip him later on, but might prefer to get a younger role player back now, someone who can grow with Myles Turner.

Yet with so little leverage after Paul’s decision became public, Indiana might not be able to get too picky.

So Pritchard is unlikely to hang up on R.C. Buford if the Spurs make a call, as the Spurs could put together a competitive offer. The question is, should they? Losing rotation players, prospects and picks for a rental doesn’t feel like a Spurs-y move. Few franchises value continuity and chemistry as much as San Antonio does. Having a guy with one foot out the door could be damaging in the locker room, which might lessen, or even negate, the obvious upgrade in terms of talent. It’s a tricky situation.

Whether the Spurs even make exploratory calls might be conditional on whether they believe that the addition of Paul to their core of Kawhi Leonard and LaMarcus Aldridge gives them a real chance to beat the Warriors and whether they believe there’s at least a chance George re-signs if they make it deep into the postseason.

The former is not a certainty, as the lack of depth would be damming, but the defensive versatility afforded by having Leonard and George at the forward spots is definitely intriguing. The latter is impossible to know without talking to Paul and gauging how determined he really is to join the Lakers the season after next. He has mentioned that what he wants above all is to win, but there have been rumors about his desire to play in his native California for years.

For now nothing seems imminent. Once again, the Spurs have not actually been linked to George yet and might not ever be. The Cavaliers appear to be the favorite to land him at this point and the Lakers could decide to throw in some of their assets to get him to Los Angeles this season. Either team could outbid San Antonio easily, so it would be unwise to consider the Spurs as anything but a long shot to get George.

It wouldn’t hurt to make a call, though. George is a star who plays both ends and would give the Spurs the size and versatility at the wing they will need to compete with the Warriors going forward. If there’s a chance to land him, San Antonio should pursue it, within reason.