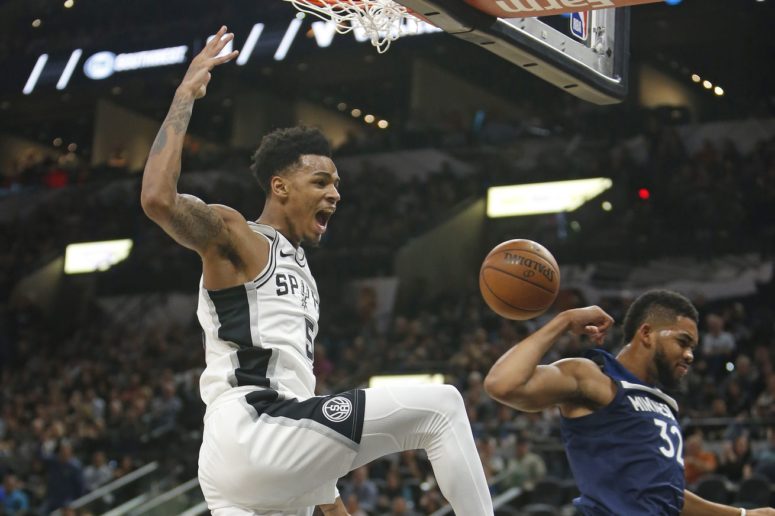 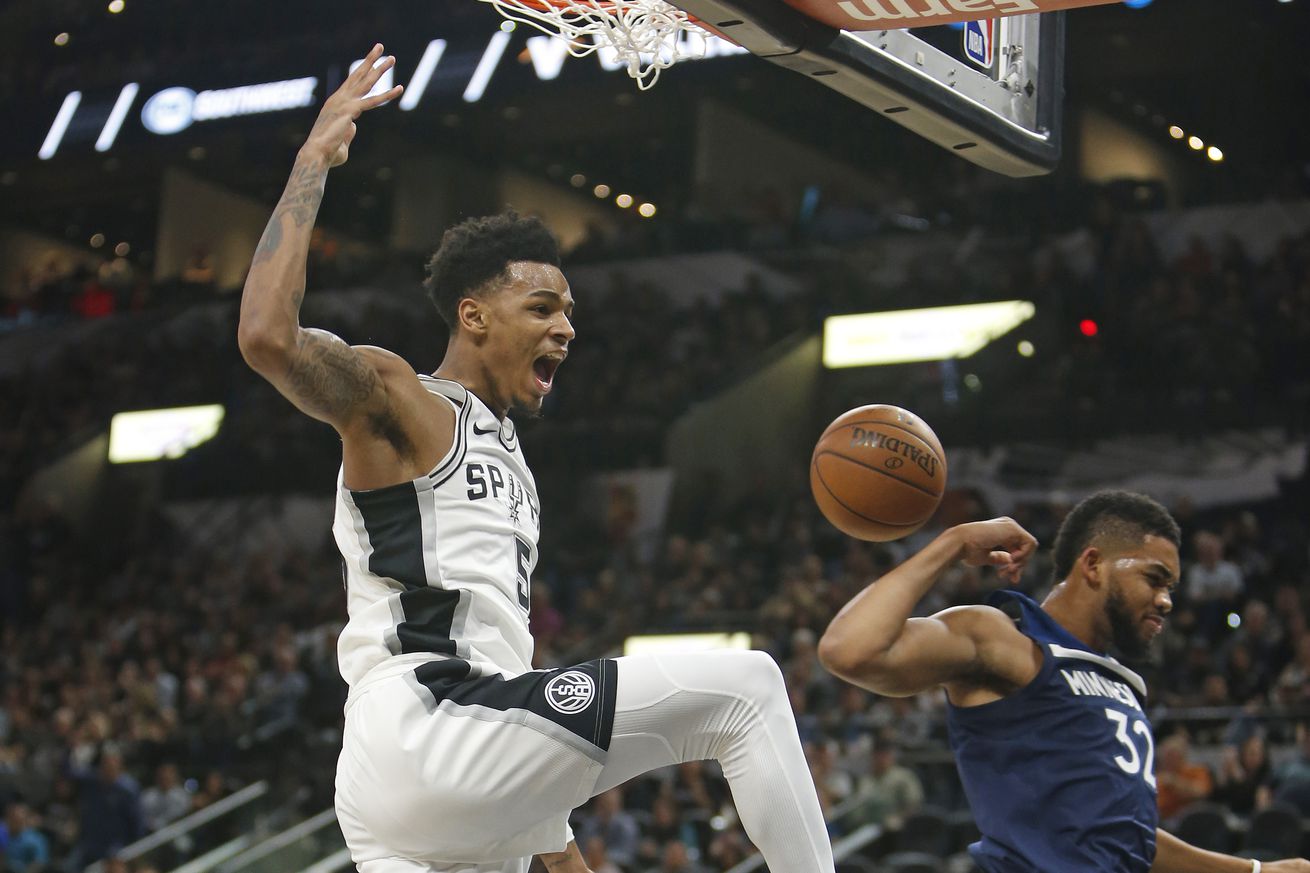 A progress/scouting report on the San Antonio’s point guard who is taking full advantage of his opportunities.

DeJounte Murray is a different kind of player. His physical attributes set him apart, but so do the little things he does throughout the game that put him in position to succeed. What follows are some things I noticed while watching the Spurs defeat the Raptors Monday night. I think they go a long way towards understanding what separates DeJounte from the average player.

When DeJounte Murray feeds the ball to Lamarcus in the post, instead of cutting through and running to the opposite corner, he cuts just past the opposite block. He positions himself behind the basket and gives his defender a chance to lose track of him.

Dejounte feeds LMA and goes to stand underneath the goal. pic.twitter.com/C9wvI6QC6e

If he did loop through to the opposite corner, his man would pack the paint or outright double Lamarcus. By standing behind the basket just outside of the paint, he makes it hard on his defender to keep both the ball and DeJounte in sight. His man cannot bother Lamarcus because if he does, DeJounte is likely to get an easy layup. He basically gets his man pinned in a difficult spot. Murray’s positioning also allows him to find a hole in the defense for an offensive board. This slight deviation from the Spurs’ normal action gives DeJounte a lot of control, even when he doesn’t have the ball.

DeJounte’s length becomes increasingly impressive the more you pay attention to it. I wrote that he has a 6’9½ reach because that’s what Draftexpress recorded, but it’s likely he has grown since then because he claims he has a 7-foot wingspan. His length catches his opponents off-guard. It’s similar to what makes left-handed players so difficult to guard. Players are used to everyone being right-handed, so when they face a leftie, they can’t rely on their instincts. Thinking instead of reacting results in slower actions, and so even if they force themselves to be aware Manu Ginobili is left-handed, they are still playing from behind because it is outside the norm.

Similarly, whenever a player faces a 6’5”, 170 pound guard, his brain assesses the threat based on his size. Ibaka is never going to see a skinny 6’5” guy and think, “I had better box-out and really get up high for this rebound.” This allows Murray to sneak in and beat him to the ball with his ridiculously long arms. Murray’s length will also take guards by surprise. They are not expecting him to have the reach he does. When playing against 99.9% of guards, they can get a shot off. They can dribble past without worrying about having the ball poked away. DeJounte’s long arms, and his quick reflexes, allow him to do things on the court that few others can. And even if his opponents adjust at some point, Murray still wins because now they are thinking about where he is, what he’s doing. This slows them down and makes them less effective.

DeJounte has a great first step, sometimes off a crossover and other times off a hesitation dribble. He has shown the ability to blow by his defender. What I like is what he does after he gets by his man. Some guards shoot floaters, like Tony Parker. Others, for reasons I will never understand, dribble all the way under the basket and back out to the three point line, like JJ Barea. DeJounte seeks contact. He forces the officials to blow their whistle. He mixes it up with floaters and spin moves for layups, but I think his weapon of choice is creating contact to get the defender off-balance, and attempting to finish with the foul. If you create the contact, it’s much easier to keep your balance, because you are in control. If you get hit while attempting to avoid contact, that’s when you lose yourself and throw the ball away. DeJounte seems to intuitively understand this.

Against the Raptors, DeJounte made a nice, simple play that demonstrated how far his decision making has progressed. He was on a semi-break after grabbing a rebound with the defense scrambling to get back and Danny Green spotting up in the corner but defended. Murray drove towards Danny’s man, forcing him to leave
Green, and as soon as he did, Murray fed Danny for an open three.

Murray in transition: draws Danny’s man and dishes an assist to Green. pic.twitter.com/eZhutiy9ZW

It’s simple, but in the moment, driving just to create an open look for your 3-point shooter is impressive. DeJounte is already getting comfortable enough to adlib on the court. Some players take years to get to this level — others never make it.

DeJounte showed poise against the Raptors. Kyle Lowry tried to bully him a few times and it didn’t faze DeJounte at all. He just kept attacking. When Ibaka threw an elbow at Lamarcus and Aldridge retaliated, DeJounte jumped in the middle and pulled Aldridge to safety, even brushing off Pop in the process.

Similar to former Spurs greats like David Robinson and Tim Duncan, he’s humble. He seems to have wholly bought into the Spurs’ culture. I understand it’s just three games, but what DeJounte is showing is very special. The Spurs’ future looks brighter and brighter.

The question is: What is DeJounte’s ceiling? I have no idea, but I can tell you it’s way up there.